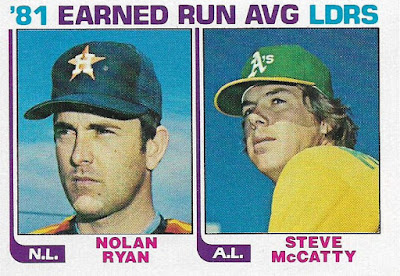 The phrase "strange bedfellows" may be an odd one to apply to baseball or baseball cards. The phrase first appeared in Shakespeare's "The Tempest," in reference to a man who was shipwrecked and took shelter beside a sleeping sea monster.

But I am not referring to misery here. In fact, just the opposite. The "strange bedfellows" on this particular card were being honored for their exceptional year. It's a happy occasion. If there was any misery, the subjects kept it hid well, as Nolan Ryan and Steve McCatty led their respective leagues in earned run average.

However, the combination of the two, 36 years in retrospect, is "strange". Ryan is a Hall of Famer, one of the greatest pitchers of all-time. McCatty played 10 years in the majors, struggled with injuries, and put together a single above-average season, enhanced by the 1981 strike year, to take the AL earned-run average title.

Then that very title was taken away from McCatty the following year as the method for calculating ERA changed after the 1981 season. Total innings pitched were no longer rounded to the nearest inning. That meant that the Orioles' Sammy Stewart, who finished behind McCatty by a mere hundredth of a percentage point in the original calculations, was now the ERA champ -- 2.32 to 2.33.

So McCatty didn't even merit sharing a spot with Ryan!

To me, these earned-run average leaders cards from the 1970s and '80s were the greatest because if you didn't pay close attention to the previous season, you never knew what wacky person would turn up on them, what weird combination would be showcased.

With most of the other statistical categories, the selections were clear: superstars only. 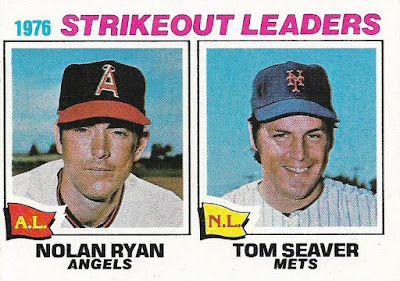 On the strikeouts leaders card, Ryan dined with his NL counterpart and fellow star, Tom Seaver. There wasn't a McCatty for miles. Read the back for the runners-up: Blyleven, Eckersley, Blue, Palmer, Perry, Jenkins, Richard, Carlton, Sutton. No strange bedfellows here. These guys ... uh ... um ... belonged in bed together.

It was that way for many of the other categories, too. 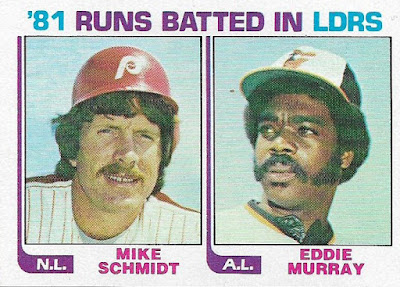 Schmidt and Murray. RBI leaders. Yes, definitely, they belonged together. 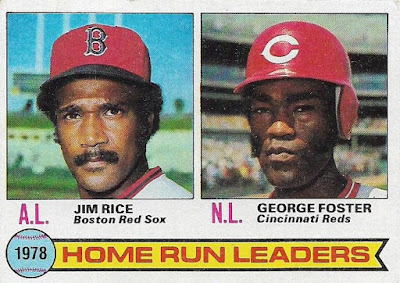 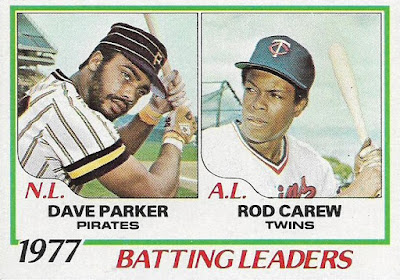 Parker and Carew. Batting leaders. Brothers from a different mother. 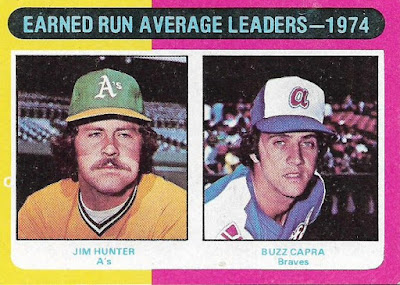 Then the ERA leaders card hits you -- bam -- with Catfish Hunter and ... uh ... Buzz Capra? Granted, probably the greatest leader card ever in terms of nicknames. But these are some weird bunkdudes we have here. 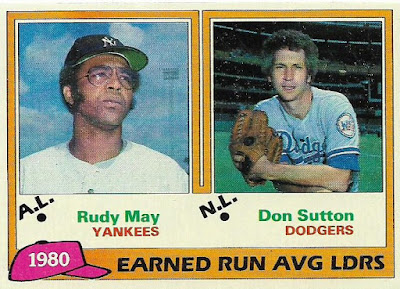 But Rudy May? No, you did not expect more than one card of Rudy May in a set.

Sometimes, the ERA leaders cards were so wacky that both players featured were strange and wonderful. 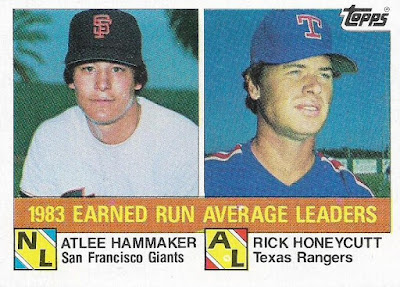 Atlee Hammaker and Rick Honeycutt for example. Tell me what they ever led the league in again. 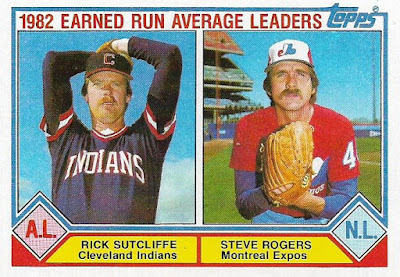 The ERA cards were a place for your "Hall of Very Good" players. Guys you remember, but often forgotten by the casual baseball fans. The ERA cards often cost much less than the HR or SO leaders cards because of this, and that's a damn shame.

Most leaders cards between 1973 and 1984 displayed just two players, the top person for the AL and NL. Leader cards prior to '73 often featured three players -- the top three for each league. But even with the different presentation, you still saw some unlikely players showing up on the ERA cards. 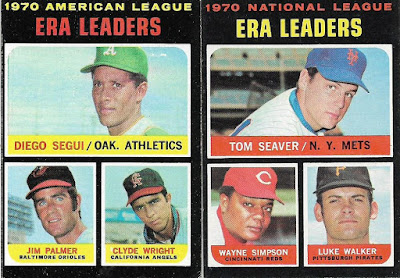 1971, for example. Diego Segui and Clyde Wright dining with Jim Palmer. Wayne Simpson and Luke Walker sharing a table with Tom Seaver (maybe it should be "strange table partners," that sound a little less awkward than "bedfellows.")

That's not to say that there weren't players whose star flickered for just a year or two on other leader cards. There were. And there were ERA cards with nothing but superstars, too. 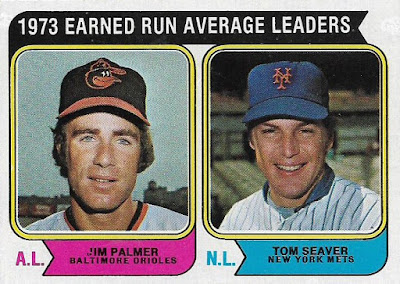 But the ERA cards, to me, seemed like the grab bag of leaders cards much more than any other category (you could make arguments for stolen bases and saves leaders, too). You never knew what you were going to get. 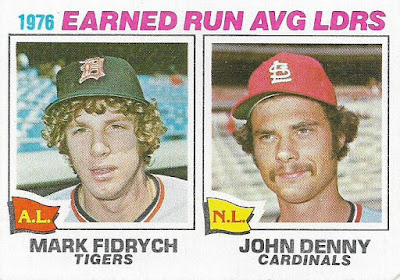 These guys probably looked like they'd be stars for a long time when this card came out. Some good years for Denny later on, but, overall, nothing on this card says "hall of famer". Just another fun card out of the grab bag.

After 1984, Topps dispensed with leader cards for awhile. They re-emerged during that period when I wasn't collecting. And then in 2008, they started appearing annually with three players per league for each category, much as Topps did during the '60s and early '70s and in 1976.

I've noticed something different with the ERA cards from the more recent years. 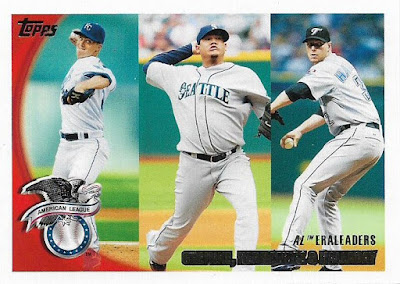 Every last player on the recent ERA cards seem to be the best pitchers in their field. There isn't a "what's he doing in there?" player in the lot.

This could be for a couple of reasons. One is it's possible not enough time has passed. We don't have the perspective we enjoy with cards issued 20, 30 or 40 years ago. 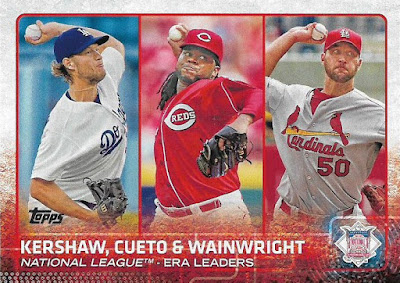 But I think it's more possible that the best pitchers in the game today are so much more dominant in every category. If they strike you out a bunch they also don't let you get any runs.

Time will tell. The careers of the more recent league leaders aren't finished. And players like Edwin Jackson and Alex Wood show up on the reverse side of the above two cards.

Personally, I'm hoping for a return of those "sometimes good" pitchers and a return to those two-player leader cards.

There's nothing quite as quirky as a strange bedfellows league leaders card.

BobWalkthePlank said…
Love it! Who knows maybe last year was a step back to more obscure "sometimes good" pitchers. The leaders were Aaron Sanchez and Kyle Hendricks. You should have just photoshopped yourself to Steve Rogers to see if anyone else would notice......or did you
March 21, 2017 at 8:49 AM

Johnnys Trading Spot said…
16 players on the leader cards are PC guys of mine, 3 or 4 cards have no player in which I collect other than the set build. Sadly, one was of the modern day leaders.
March 21, 2017 at 9:40 PM