As a writer, I have a relationship with the stories and posts that I write. You've probably heard writers describe their stories as their "children" and I can relate.

While some can pound out a post, hit "publish" and then forget about it once the sun goes down, it doesn't work that way for me. I write some posts that I want to forget, but can't. And I write other posts that I like ... a lot. I have favorites when it comes to posts.

Yesterday's post was a favorite. I couldn't wait to get the idea up on the blog. It didn't get the biggest response, but that's OK. The cool people know why I liked the post so much. I was writing to them.

But since I like to offer variety on my blog and because I knew I had probably bored the "what's new" crowd with last night's post, I thought I'd find something for them. I was getting a few birthday goodies for my daughter today when I ambled over to the card aisle and grabbed a single 24-card pack of this year's Opening Day.

Opening Day is virtually useless as a product, moreso than in years past when it could at least draw the anti-foil collectors. It's two selling points these days are price and inserts. That right there tells you the set doesn't need to exist.

I figured I'd show this pack, write some dismissive words and then show a few cards that I received recently from a fellow collector, cards that I really wanted. I even had a working title: "A pack of Opening Day plus some other cards I actually like". Snarky but effective.

The card gods got me. They caught me being cynical and decided to teach me a lesson, using this very pack of Opening Day.

So let's see what was in that Opening Day pack that I was pretty sure before it was even opened that it would be the only pack of the stuff I would open all year. 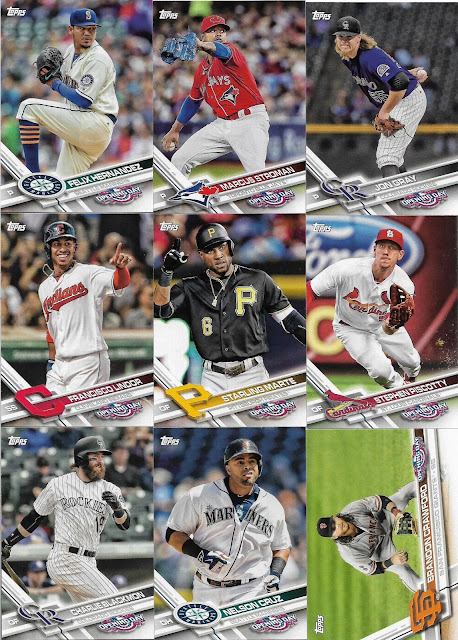 First we have the cards we've all seen in 2017 flagship already. This is OD at its most sleepy. I actually do like these better because the Opening Day logo fills in that useless gray patch in the bottom right corner. But really these cards can't possibly register with collectors. Unless all they are buying is Opening Day. 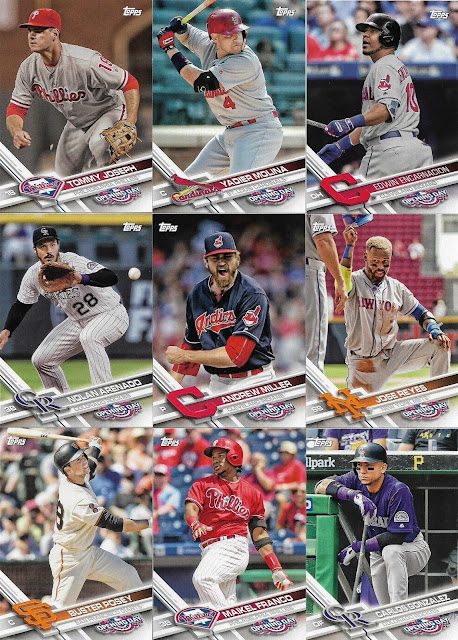 Here are the cards of players you'll be seeing in flagship Series 2. These are always mildly interesting. You can see Edwin Encarnacion in his new (photoshopped) Indians duds. Many of these same photos will appear/are appearing in respective team sets. 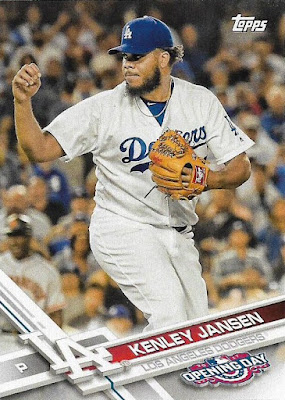 The one Dodger in the pack. Now I know what Kenley's Series 2 card will look like. 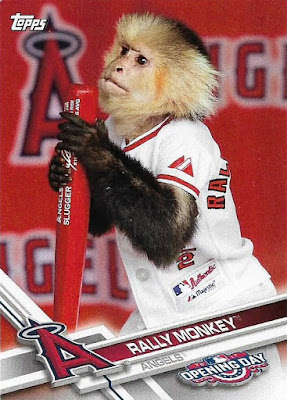 As is customary, the inserts showed up in the middle of the pack. This is one of the mascot cards and it is a real live mascot. It's pretty amusing pulling an actual monkey on a card. Opening Day inserts are fun, which makes me wonder why flagship's inserts can't be as much fun (it has "First Pitch" and that's about it). 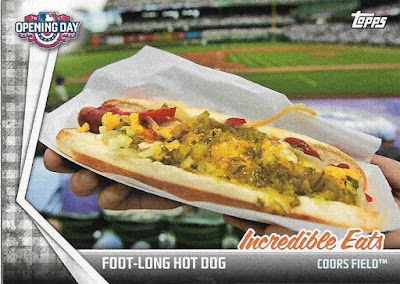 I was happy to pull one of the Incredible Eats cards. People are a bit up-in-arms about the accuracy of these, especially those who regularly attend ballparks. I go to MLB ballparks so seldom I couldn't tell you a single thing on the menu at any park. I just know that I now want a hot dog (but get that sauerkraut away from me). 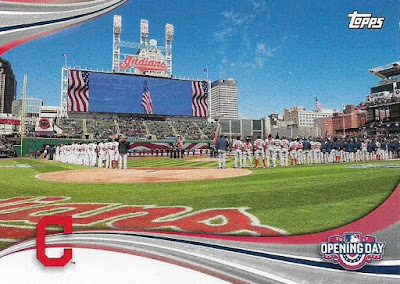 This is an insert set, redundantly titled "Opening Day," that showcases opening days at various parks (with as little words as possible, apparently). This was an insert set in flagship like 10 years ago, so I can't get excited over this.

With the inserts out of the way, it was time to look at the rest of the base cards, which is almost always the most boring part of the pack. I did pull the Jansen in that second half (it was the last card), so it wasn't a total snoozer.

Plus the first card after the inserts was this: 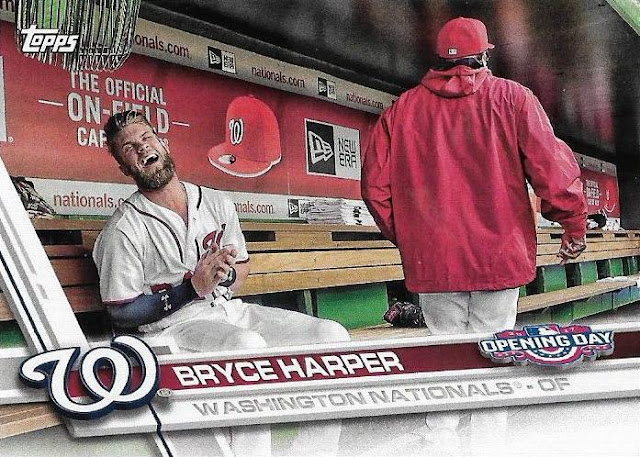 Dusty Baker here is walking away after slaying Bryce Harper with some humor. He got him good. It is an awesome photo for a card and I knew -- with very little knowledge of 2017 flagship or OD photos -- that this was a variation pic.

I have incredible luck with pulling Washington Nationals variations.

These aren't super-difficult pulls, the odds on the pack list base card variations as 1:75 packs. But, still, I can't afford to buy 75 packs in one shot, not even Opening Day.

This isn't the only Bryce Harper photo variation in Opening Day, because of course not. But it's the best one. I took a peek at what this is going for on ebay. Please, someone, hold me back from listing this.

That doesn't mean I will keep it forever. I'd trade it quickly for something cool.

The important thing for me in this is that I shouldn't be so dismissive of the cards. Even something like Opening Day. A pack of cards is a pack of cards. It holds a promise and some hope. It's up to you to decide how you will react to what's inside.

It doesn't matter the product, it's all there for you. It's about the experience.

And that's what blogging is, about the experience. Some posts connect, others don't. People are different. Some are like you. Some are not.

Just as long as we keep writing and keep collecting.

Before all this, I scanned some cards I received from Chris, the Braves fan who regularly sends me envelopes. I don't want to scrap posting them just because a pack of Opening Day became a revelation.

So here they are: 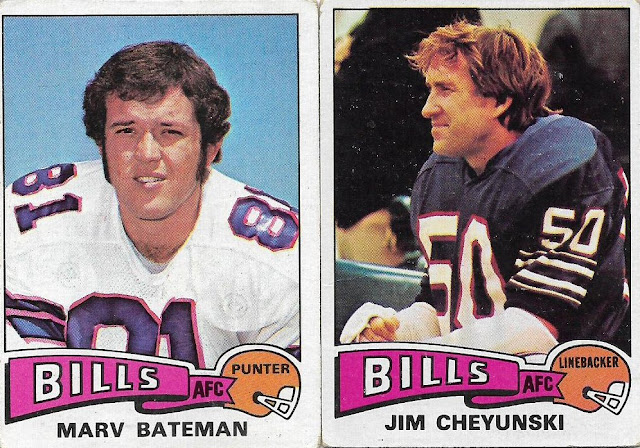 A couple of Bills cards straight from 1975. 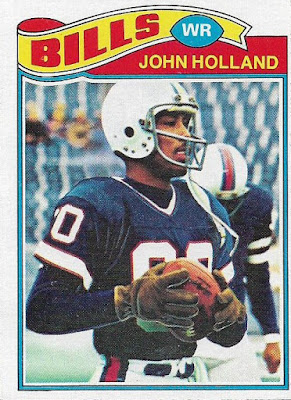 Another Bills card from that set I love so much, 1977 Topps. 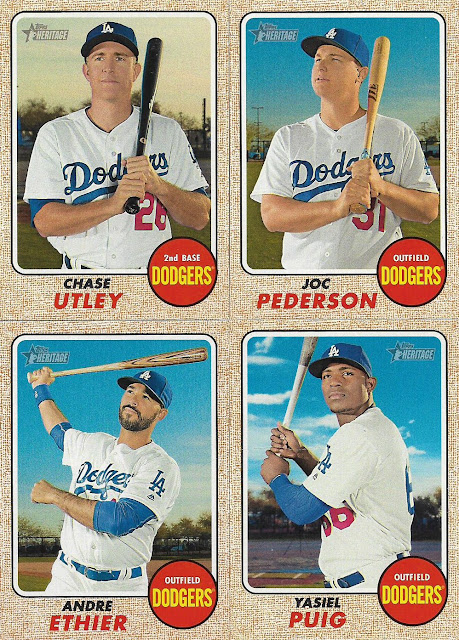 Some 2017 Heritage Dodgers needs. I hope to have a want list up tonight. 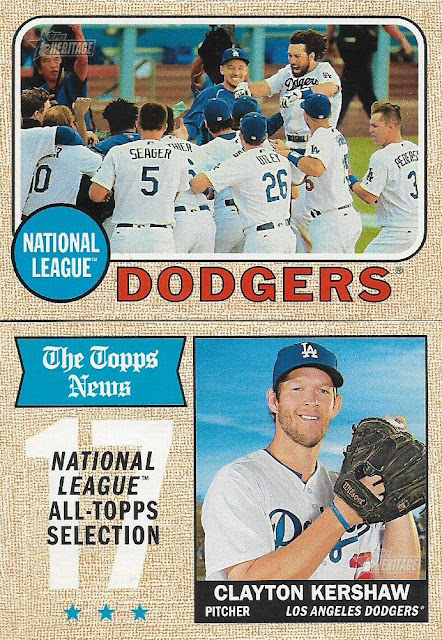 And a couple more (I actually pulled the Kershaw card in an earlier pack purchase -- I saw it peaking through the wrapper and couldn't resist).

CrazieJoe said…
I can honestly say, I never thought I would see a monkey on a baseball card....or that it actually looks pretty good. Maybe not as nice as a laughing Bryce though. Quite the pack.
March 21, 2017 at 8:58 PM

Billy Kingsley said…
I MUST get a copy of that Rally Monkey card. Thank you for posting it because I might have missed it otherwise.

The Angels In Order said…
I cant do it anymore. I cannot save one more empty wrapper just because Mike Trout is on it.
March 21, 2017 at 9:27 PM

Johnnys Trading Spot said…
Based on what a complete set of OD is going for on the Bay right now, I can't imagine what that variation is going for.
March 21, 2017 at 9:36 PM

Commishbob said…
I bought one pack as well. I got the Wrigley Field hot dog and onions card. I was surprised it wasn't a Chicago Dog card. Oh, I'll take your sauerkraut.
March 22, 2017 at 8:23 AM

GCA said…
Knack for Nats? We gotta make (another) deal. This year I'm going for all the Nats and Orioles parallels. I guess that includes opening day. Will check your lists, and my Bills inventory.
March 22, 2017 at 12:04 PM

acrackedbat said…
HOT DOGGGGGGGGG! I'm looking for the Texas Broomstick. I must have it. As far as OD, they do look better than Flagship and its useless eyesore of a patch.
March 23, 2017 at 7:48 PM

TSHenson said…
Are you willing to trade the Rally Monkey and Cleveland opening day cards?
March 24, 2017 at 9:35 AM