I am being bombarded 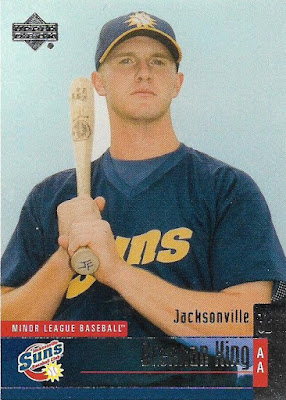 By work and cards!

March has always been an assault on the senses around here and as I continue to climb out from underneath job and family demands, I am now facing a bombardment of cardboard.

I was greeted by an entire year's worth of cards a couple days ago. I'll explain what I mean in  more detail next week but the whole thing is taking awhile to process. Then, yesterday, I was tackled by a maxi package of minis (again, I'll explain more next week). And today, I was warned that I would be visited by 1984! As a reader of Orwell in 10th grade, I don't like the sounds of that. But I've been assured it's good news.

In between that deluge and a spring sports special section that must be completed by Monday at work (spring! ha!), I thought I should squeeze in some smaller packages that I've received over the last week or two. Besides, it's been an entire week since I've written a Dodger-centric post. How are people going to know I collect Dodgers if I don't show them??? 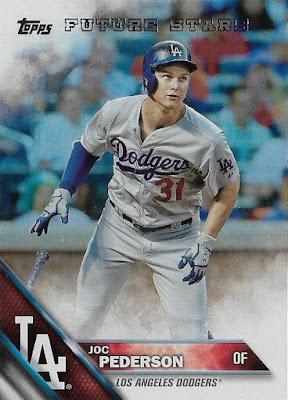 There we go. Fandom restored to normal.

This card came to me from Max of Starting Nine. You might have read about his harrowing health scare and the fallout since. I'm really glad he's well enough to post a little bit and send out some cards. We need Mets fans around. We're overpopulated with Yankees and Braves fans. Every Mets fan helps keep that in check.

The above card is a foil parallel. Topps loves these things. All they do for me is remind me of my helplessness as a team collector. 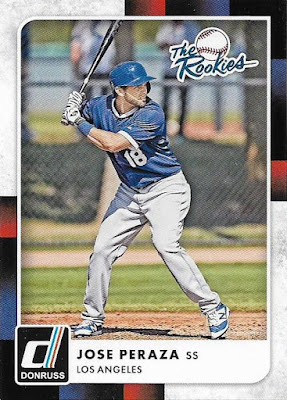 Card companies really got maximum mileage out of the seven games Jose Peraza played for the Dodgers. I now have a Dodger Peraza card for every game he played for L.A. 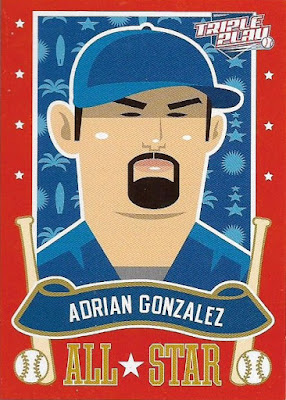 More unlicensedness! This is an insert from 2013 Triple Play. I'd like to know if anyone at all tried to complete this insert set, which I think was 30 cards. 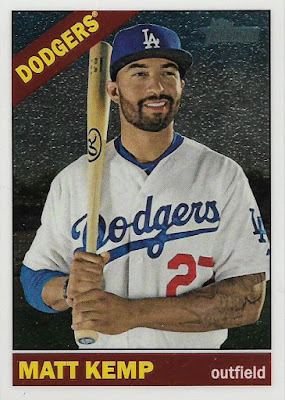 This shiny card makes me sad. The Dodgers have done fine without Matt Kemp, but I can never say anything bad about him. His best years were with the Dodgers. 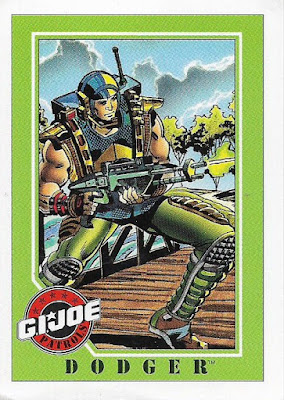 In the loosest definition of the phrase, yes, this is a Dodger card. I had no idea there were GI-Joe cards. I was a big GI-Joe fan, back when the dolls were a foot tall and had kung-fu grip. But even then I don't picture myself collecting GI-Joe cards.

I know what you are all wondering: no, this isn't going in the Dodger binder. I could, however, give it to my dog, Dodger, to do what he wished. 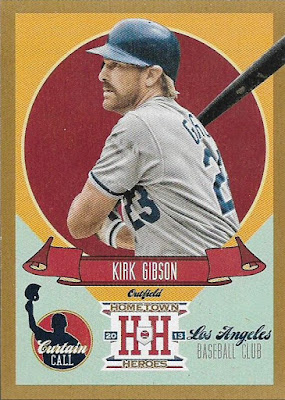 Moving on to a PWE from Gavin at Baseball Card Breakdown.

Gavin's another collector who's been suckered by ... er, attracted to ... Panini. I, myself, love Panini's Hometown Heroes set. It's ridiculous for a retro set like that to contain bordered parallels -- it just looks weird. But I will dutifully place this gold bordered Gibson next to my black bordered Gibson to impress the hell out of ... I don't know ... me, I guess. 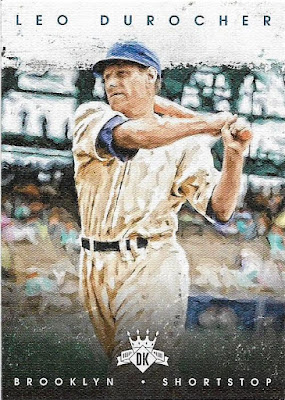 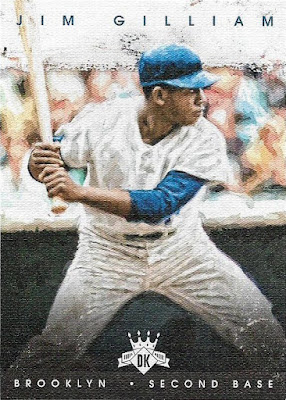 Gavin does have solid taste with the Panini products. Diamond Kings looked pretty good last year (as long as it was an old-time player). 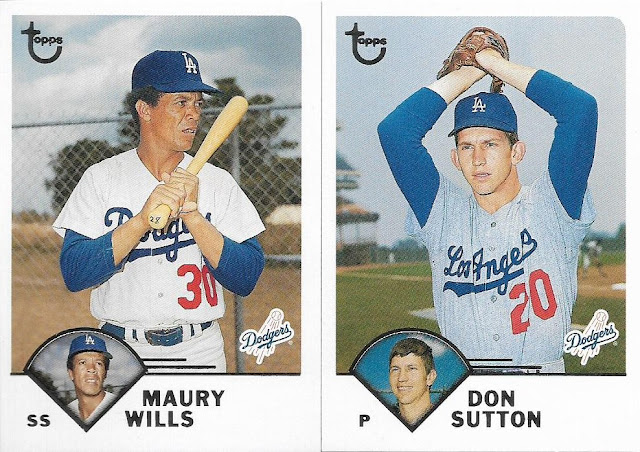 Now we're getting to a mutual love. The Retired Signatures sets from about a dozen years ago are very cool. I don't bother with the autographs that Gavin collects. I just like all cool old players -- most with pictures I haven't seen before -- on the current designs.

This was when Topps was really killing it with its retro sets, between this and Fan Favorites. Now it just has Heritage (we won't discuss Archives) and it's doing its best to ruin that. 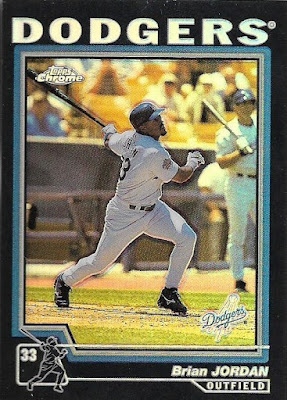 Black refractors will never be as cool as they were in 2004 and 2005. Gavin knows this, too. He thwas nice enough to leave me one of his crumbs. I hope he does the same when Gavin Lux becomes a superstar. 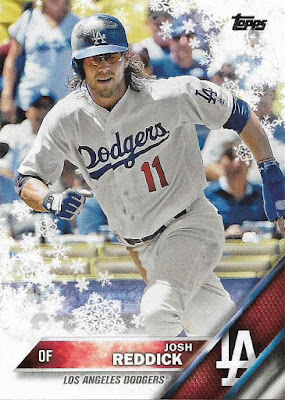 The final envelope I'm showing here today is from Jason at The Writer's Journey.

He came upon some cards from the Snowflake set from last December. He wanted to know if I had the following Dodgers:

I checked my giant spreadsheet on the wall, and even though I have several of the Snowflake Dodgers, I had none of those four! Send them all! 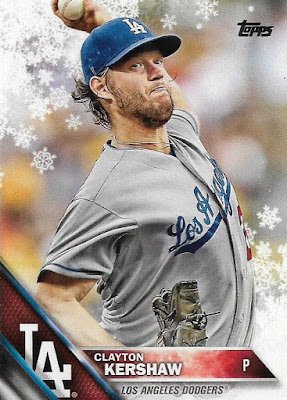 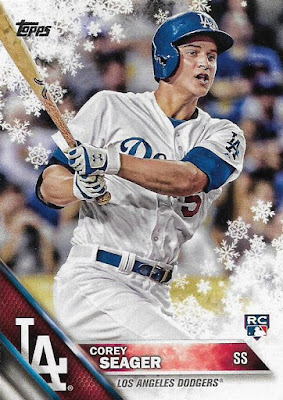 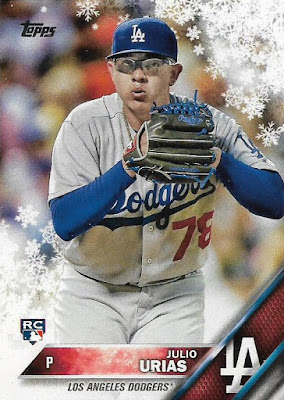 Very nice. I must be close to the end with these.

And they are not inappropriate for the season at all. It snowed earlier this morning.

We're never going to get to Opening Day.

Or the end of March.

Just keep sending me that cardboard to take my mind off of it.

Robert said…
Bombarded with cards? Not necessarily a bad thing.