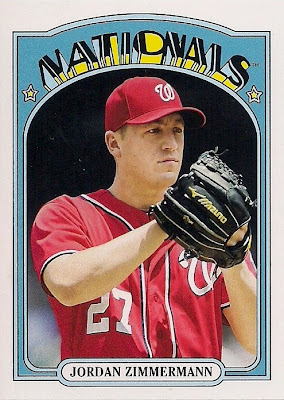 We are approaching that time of year on the television schedule when prime time programming slips into "reruns."

And then there is baseball card collecting, where we clamor for reruns. This never used to be the way. I can only imagine if I was collecting in 1980 and Topps threw a design from 1957 at me. It would instantly be my least favorite card because this wasn't NEW.

Now there are entire sets devoted to reruns, none more obvious than Archives, which is rerun after rerun after rerun. Archives even does reruns of its reruns (i.e. using a past Topps design that it's already used). This is both very annoying and probably testament to how reruns don't matter anymore.

I'll give you another Archives example.

A couple of weeks ago I grabbed a discounted box of 2013 Archives from Target. I figured it'd be good for the short-prints, which are always a pain for team and set collectors.

My goal was to get one of those snazzy '70s basketball cards: 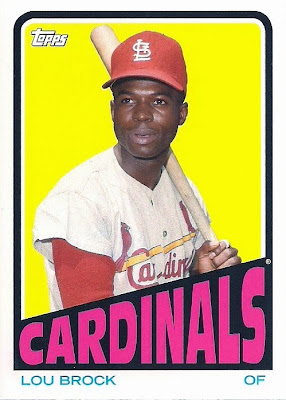 The rest was the usual half-assed retro stuff that I've complained about with Archives for the last three or four years (I can't even tell you how long it's been around).

So I turned the cards over and started looking at them.

I gravitate toward the cartoons because that's the kind of guy I am. The only design in 2013 Archives with cartoons on every card is the 1972 design. So I started looking at those -- even though the '72 cartoons might be the worst cartoons ever to appear on a baseball card.

But leave it to Archives, they made them even worse.

This is what I saw: 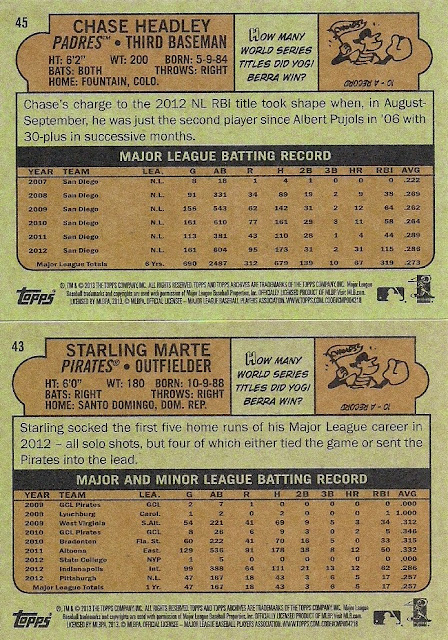 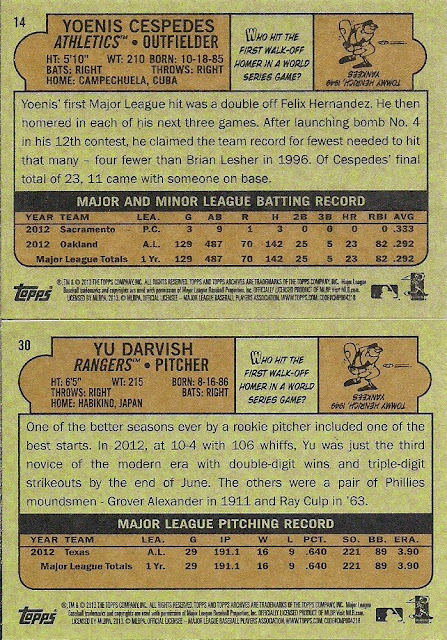 There's another one. Tommy Henrich hit the first World Series walk-off, in case you didn't read it the first time. 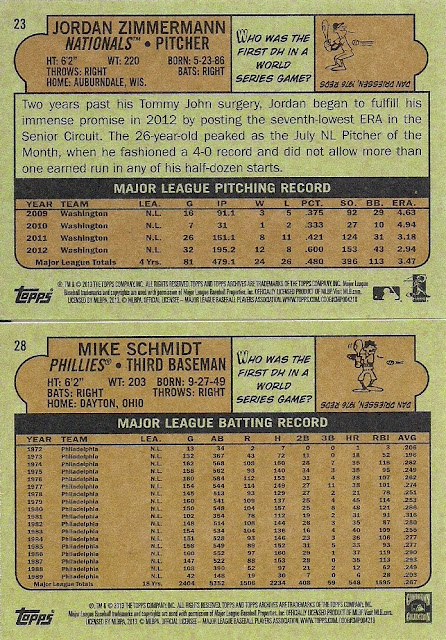 Here, the question is the same, but the cartoon is different. You're not fooling me, Topps, I know it's the same question.

Here, we're asking the same question, but with three different cartoon figures. I suppose the Giants have a pitcher, batter and fielder all in the Hall of Fame, so that works. But, again, SAME QUESTION.

Another trifecta of the same question. This one is interesting in that only one of the cartoons reflect that the question is about a catcher. The cartoon on the back of the Pagan card makes zero sense. 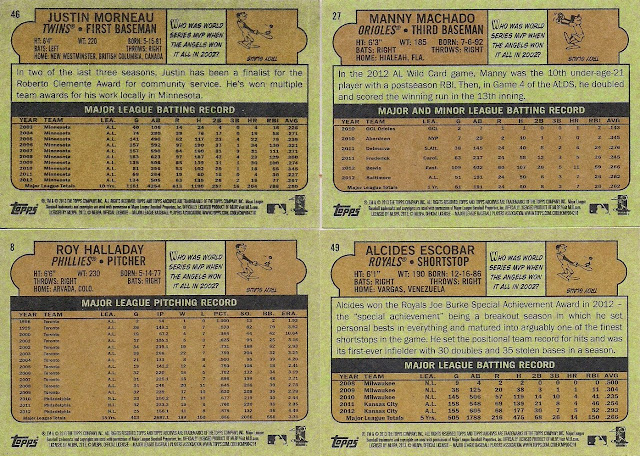 You're wondering whether there are four cards with the same trivia question? Of course there are. Troy Glaus is the answer to all of these because it's the SAME QUESTION. The Manny Machado card mixes it up a bit by showing a cartoon pitcher. Glaus was not a pitcher. 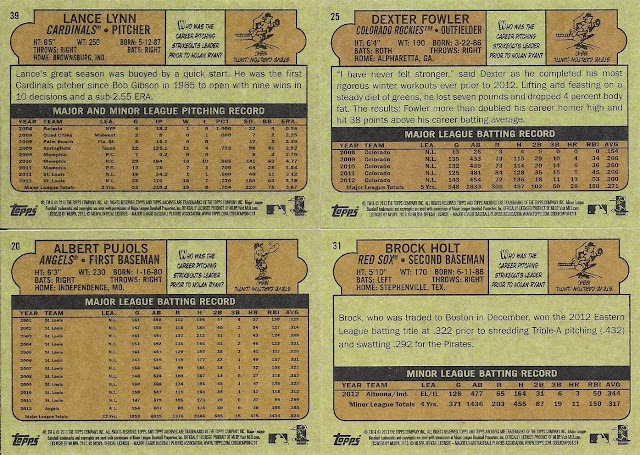 And, what the hell, let's pretend Steve Carlton is a batter in one of the cartoons.

The fact that there's so many repeats is amazing because the '72 design makes up just 50 cards in the set. It's not like we're talking 660-792 cards in which there's a cartoon.

But this is what happens when so many sets are issued and so much emphasis is placed on inserts and hits. The base cards suffer, in many different ways. There's not enough time to be thoughtful and creative. Even with 150 years of baseball knowledge, there's apparently not even enough time to come up with 50 different trivia questions.

That's the life of a card collector these days, dealing with reruns.

Thank goodness we have eBay, the cardboard version of Netflix.

Cardboard Jones said…
I will ad this: the base cards suffer when Topps places a great amount of time designing 'inserts' for Topps Bunt. They would be better off dedicating the time and resources to the base set.
May 9, 2015 at 9:46 PM

Zippy Zappy said…
I was looking through old cards of Bowman Draft from 2012 the other day and noticed that Topps managed to screw up the DOB, home town, round drafted, year drafted, etc... on a lot of guys. Clearly they're more focused on making sure the masses have more Wil Myers and Salvador Perez sticker autographs than caring if people actually read the back of their cards.
May 9, 2015 at 10:04 PM

Kevin Papoy said…
It's funny because I opened a box of 2013 Archives a few months ago, and I thought the exact same thing about the backs/cartoons/repeats. I sell comic books for a living, maybe I should hook Topps up.
May 10, 2015 at 5:18 AM

Commishbob said…
I don't buy more than a pack or two of these types of Topps issues so I wan't aware of them being so darn lazy with it. I guess I shouldn't be surprised though.
May 10, 2015 at 10:33 AM