Joy of a team set, chapter 5 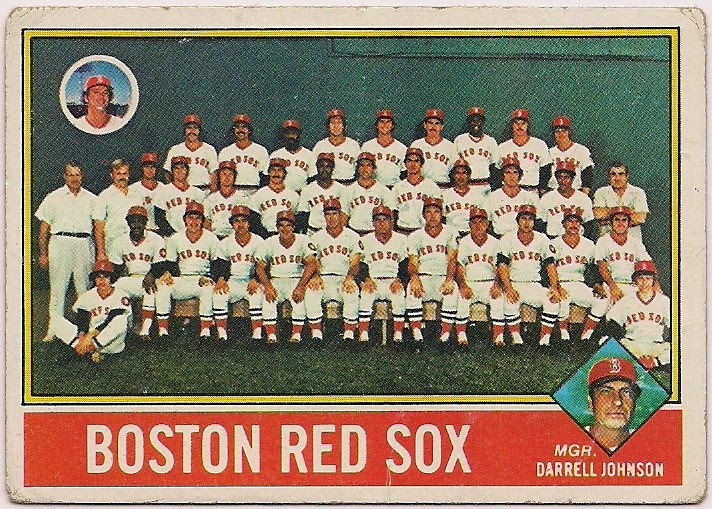 The Society of Baseball Research (SABR) has released a new book, titled '75: The Red Sox Team That Saved Baseball, in recognition of the 40th anniversary of that Red Sox team that went to the World Series and revived interest in the game ("saved" might be a little hyperbolic, but, hey, you gotta draw people's interest).

Also, the Red Sox are recognizing that very team at tonight's ballgame in Fenway Park.

This is an excellent opportunity to present my thoughts on that team, which has fascinated me since the first time I viewed baseball highlights on the black-and-white TV in the front room. The room was to the left of the staircase and, for famished kids, acted as a shortcut between the front door and the kitchen.

The '75 Red Sox bring out every childhood emotion in me. Fascination. Wonder. Amusement. Fear. Exhilaration. And they are all documented in the 1976 Topps set, which is the set I associate with the '75 Red Sox (someday I should do a post on whether collectors associate a particular team with the set from the year that team played or from the following year's set).

To me, the 1976 Topps Red Sox team set IS the '76 Topps set. It is packed with emotion and intrigue. That team set is filled with memorable photos and may be one of the best-looking team sets of the pre-Upper Deck era.

So many questions went through my head while collecting these cards as a kid:

- Where is Bill Lee's other arm?
- Why is Denny Doyle staring at me?
- How did they let Deron Johnson both play and manage for the team? (I had "Deron" and "Darrell" mixed up)
- Why is that one player floating above the rest of the team on the team card?

I marveled at the chaw in Rico Petrocelli's cheek, and recoiled at the sight of Reglio Moret after reading about his catatonic state. I played random favorites with Rick Burleson, Cecil Cooper and Bernie Carbo. And I was in awe of a team that featured not one, but TWO rookie cups (Fred Lynn and Jim Rice).

This is a special team in my life. It's not the ESPN Red Sox that fans moan about today. This was an underdog, upstart club that pulled people back to baseball again after years of declining attendance figures. 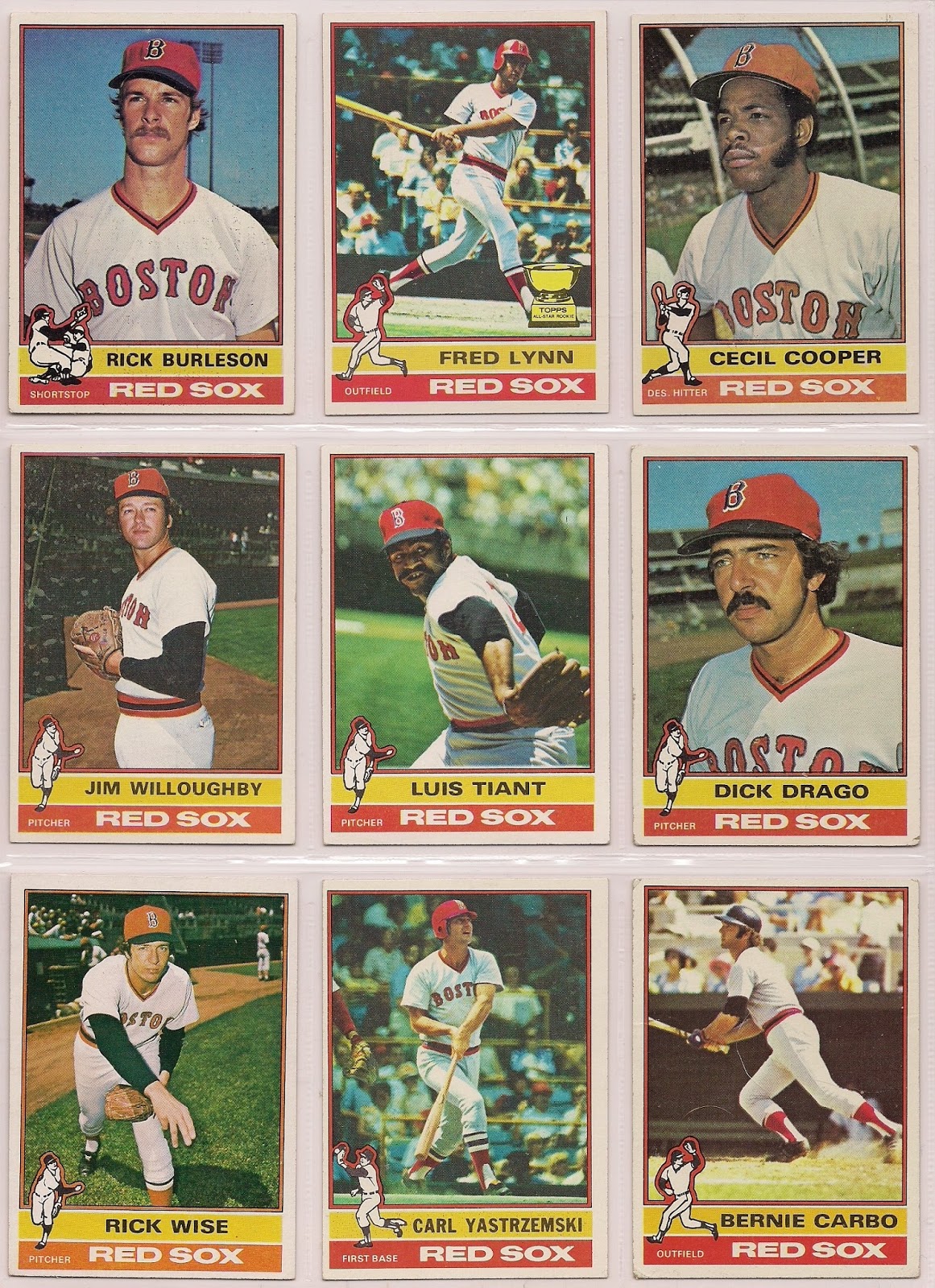 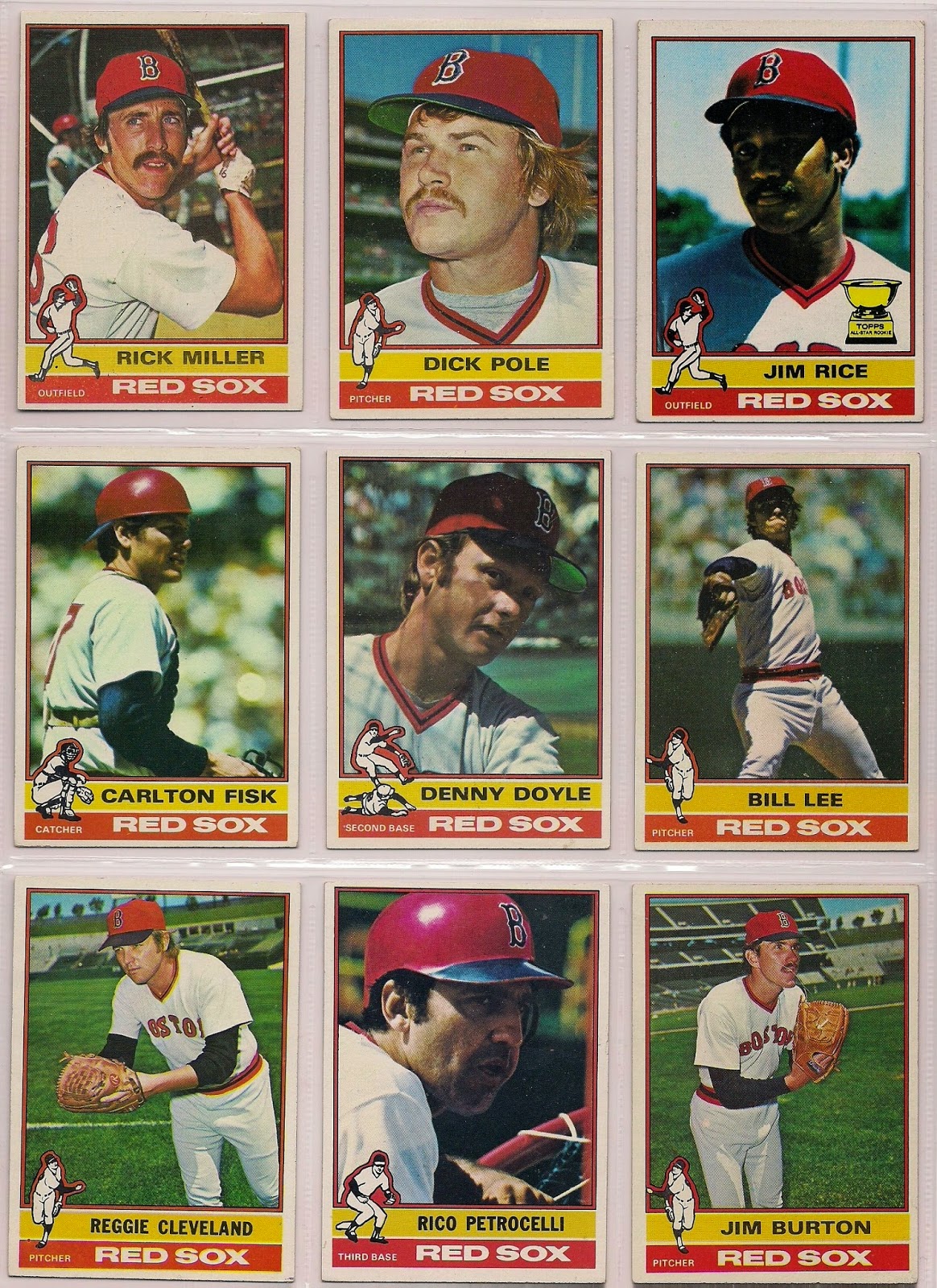 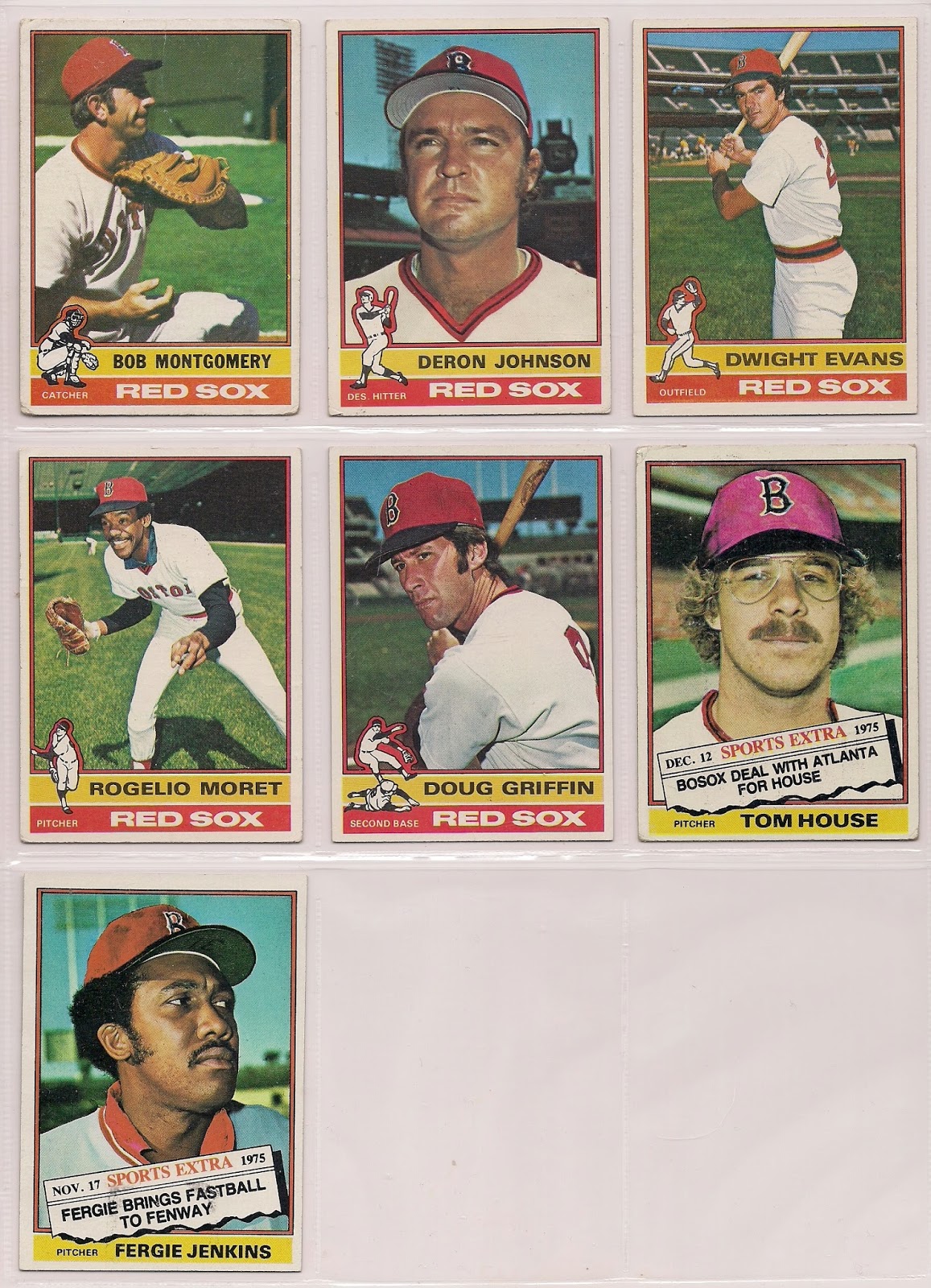 House and Jenkins, of course, didn't have anything to do with the 1975 Red Sox.

There are a couple of other '76 cards that mention the Red Sox, too. Fred Lynn is at the base of the three-player pyramid on the AL batting and RBI leaders cards. 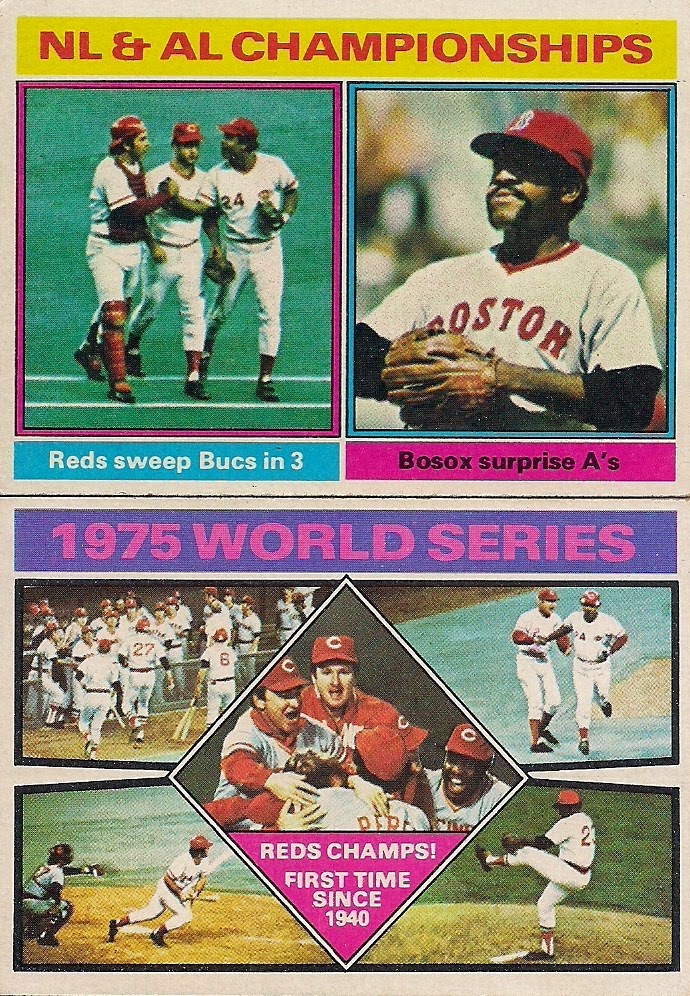 Luis Tiant is all over the postseason cards. 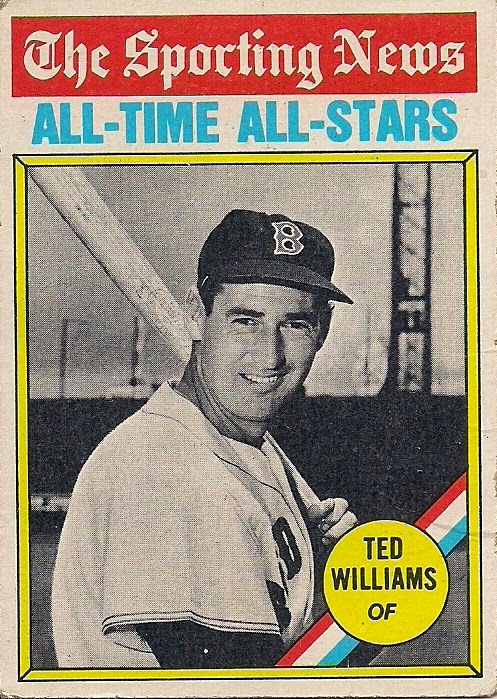 And Ted Williams' appearance gave '70s Red Sox fans a past to brag about, too.

Now, here is the rundown: 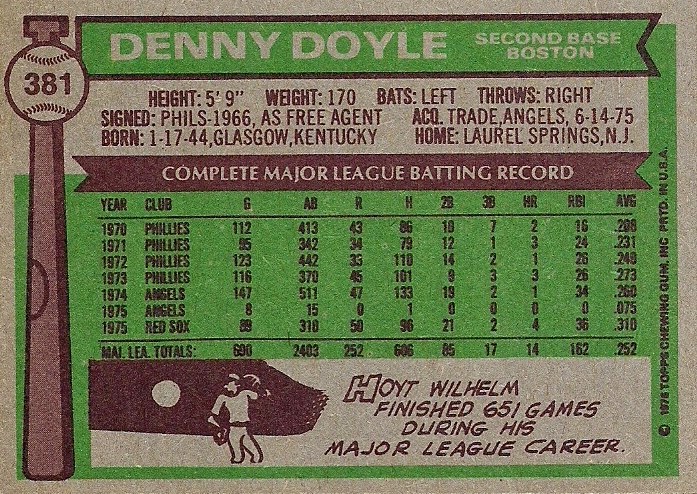 Famous error card: None that I recall, although there is some joker who sneaked into the set and called himself "Dick Pole".

Team's claim to fame: "Saving Baseball". To be specific, they upset the three-time defending champion A's in the playoffs, then forced the Big Red Machine to seven games in the World Series, thanks to Carlton Fisk's epic Game 6 home run and a host of other memorable plays, before succumbing.

Players I've talked to: None. Although the paper I work for has interviewed and done stories on both Bill Lee and Jim Rice. 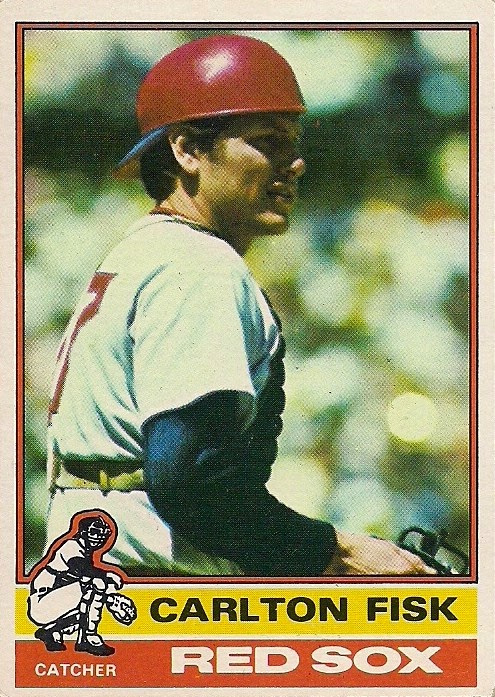 This may be the seed that was planted in childhood talking, but this photo has always looked to me like Carlton Fisk is on horseback. And that has always made it exceedingly cool.

Former or future Dodgers: Surprisingly, none. Fred Lynn was nearly a Dodger for the 1981 season as in the offseason, L.A. engineered a trade for Lynn that would have sent Steve Howe, Joe Beckwith and prospect Mike Marshall to Boston. But it fell through because Lynn wouldn't agree to a multiyear contract. 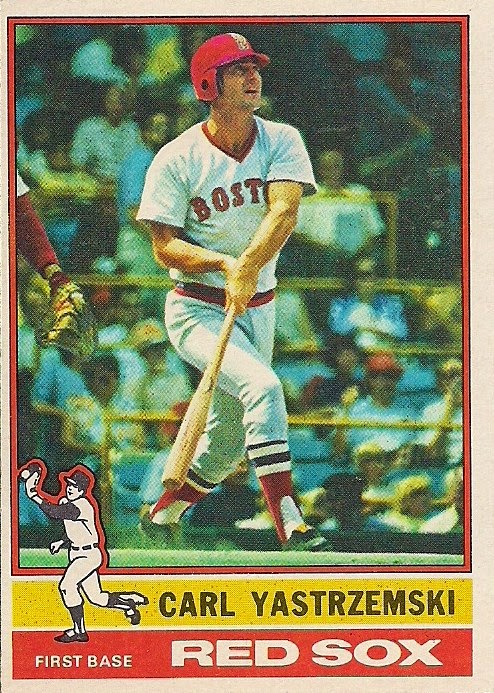 Thanks again for joining me for "joy of a team set".

Tony L. said…
There is definitely a big difference between pre- and post-World Series Champion Red Sox. As I heard one complainer put it, all the Red Sox are today are the Yankees without all the Championships before the last 15 years.

Mark Hoyle said…
Great post N.O. I lived and died with that team. Watched every game on my little black and white TV also. Just watched the preface where they introduced the players one by one. They've also had a different player up in the booth every half inning . Great memories
May 5, 2015 at 8:32 PM

Anonymous said…
Weird - I was looking for something on Amazon today and came across that book. Complaint coming here, and an half-hearted apology; I am both a Reds fan and someone who wasn't even born in 1975.

"Saved baseball"? I saw that on Amazon (and didn't realize it was a new book) - and couldn't believe the homerish-ness of that title. I didn't realize baseball was dying in the 1970's? Again, I wasn't alive then, but I'm pretty sure that baseball was still the most popular sport in America. What needed saving? Cal Ripken, Babe Ruth, even McGwire/Sosa - all could be argued they saved baseball. But from everything I've read, in 1975 baseball was thriving.

Again, I'm (not really) sorry - but this team gets way too much credit. They didn't even win! That Fisk homer - yes, it was clutch, but the team didn't win the series. It's not on par with homers like Gibson's (Either of them), Mazeroski, Thomson, Carter, or Boone - those were all do-or-die situations that led to their team advancing.
May 5, 2015 at 9:44 PM

night owl said…
"Saved" is too strong a word, as I mentioned in the post. But it's a fact that baseball was really struggling in the early '70s. There is lots of documentation on that. Maybe the Sox get too much credit, but the '75 Series did get more people to pay attention again.
May 5, 2015 at 9:57 PM

Don said…
Great post. I just happen to be in Boston on business this week, just a short walk from Fenway (I can see the park from my hotel). I was able to attend last night's game. The game program has an update on where the members of that team are today, I first thought Johnson was a pler and manager for a second. It did not help that they have both passed away.

One thing that bothers me about the throwbacks they wore tonight. Tonight's uniform had the bicentennial patch on it. That patch was worn in 76 and not 75. Wish they would have worn the 75 uniform when they honored the team.
May 5, 2015 at 11:14 PM

Don said…
Looks like I was wrong. The Sox wore this patch in the regular season and not the postseason. I was 5 that year, so my only memories of that team come from the world series highlights and cards. The patch only appears in the 77 set, which led to my confusion.
May 5, 2015 at 11:57 PM

Stack22 said…
Thank you Boston for saving us from the horror of a lovable small market team like the Athletics, full of colorful personalities, winning three straight World Series. Hopefully we'll never have to suffer through that again.

This is why everyone hates the Red Sox. They lose a World Series and claim they saved baseball in the process. You don't hear losing armies claiming they saved democracy by fighting so poorly.
May 6, 2015 at 10:27 AM

Brett Alan said…
Yeah, the patch is a pretty confusing issue. Apparently the state of Massachusetts started its bicentennial celebration in April 1975 (counting from the Battle of Lexington & Concord), so the patches were worn on the home uni both years, although not during the '75 Series for some reason. Some more discussion of it here: http://letsgosox.blogspot.com/2007/12/mysterious-bicentennial-patch.html
May 6, 2015 at 3:52 PM