May 30, 2015
(So, you know that Topps Heritage coupon that I lamented forgetting because it wasn't in my wallet? I added it to my wallet only to realize that there was no money at the end of the month to be spending frivolously on cards. The coupon expires tomorrow. Weee. Let's visit a time when I was buying cards. It's time for Cardboard Appreciation. This is the 225th in a series): 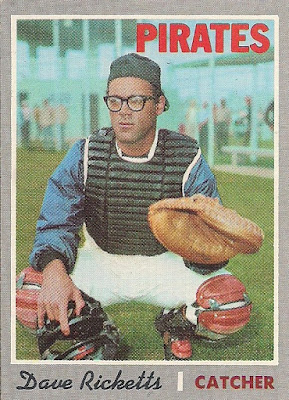 Lately, Cardboard Appreciation has been converted into a "dumping ground" for cards I have acquired as potential selections for the 100 Best Baseball Cards of the '70s countdown.

But I can't think of any better examples of cards that I am appreciating than these ones. I love cards from the '70s, and have viewed virtually all of them in my time as a collector. To stumble across one that either I have not seen or I maybe saw in passing online or at a card show, is quite a hoot. They become my New Favorite Cards.

This Dave Ricketts masterpiece arrived today. It speaks to me in a way that only cards from this time period can. It's more of a '60s card than a '70s card because Ricketts was in the final days of his career at this time. And those glasses are definitely not the tinted lenses of my favorite decade. But this is why I like it.

It's a card on the fringe. A man pictured with one team (the Cardinals), but masterfully turned into a Pirate. A new team and a new decade. Yet, he's trapped in the '60s. In the distance, men in blue and green slacks watch Ricketts' reluctant transformation.

I don't know if this card will make the final 100, but it has an excellent chance. 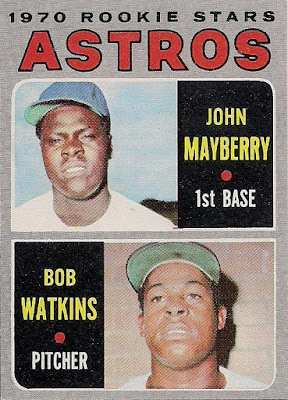 I also grabbed this card, because I laughed the second I saw it.

Among all the baseball cards that could double as mug shots, this one might have them all beat (perhaps, I need to do a countdown of "baseball photos as mug shots" cards).

John Mayberry, of course, became a breakout slugger for the Royals, also playing for the Blue Jays and Yankees, and his kid is playing for Mets now. I read about Mayberry in one of those Tempo baseball paperback books when I was a kid.

Bob Watkins, I don't know. He pitched in just five games for the Astros in 1969 and never returned to the major leagues. He was out of pro baseball by 1972. I'm sure he went on to live a fulfilling existence and not the life of crime that this card seems to suggest.

I don't know if this cards will make the countdown, but I had to have it for my collection. I have my eye on several other '70s cards that are also countdown candidates, but I'll wait for the money to come in again.

I used to fret that the process of putting together this countdown was taking too long. But now I enjoy the pace. I want to take my time and turn up Topps and non-Topps cards (yes I've decided to add Kellogg's and SSPC and Hostess to the list of possibilities).

I want this to be the best cardboard countdown representation of the 1970s that's ever graced a computer/touch screen.

Tony L. said…
That Astros Rookies card was one that, for some reason, I have literally always had in my collection. I'm not sure how or why, but it has just always been there, alongside a 1971 Topps Ted Savage.
May 30, 2015 at 8:06 PM