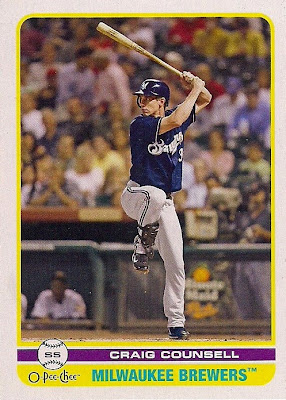 The 2009 O-Pee-Chee set is filled with spectacular cards such as this. Marvel for days over the heavyset cameraman, or the Minute Maid Park logo (mmmmm, oranges!), or whether that's Cecil Cooper crouched in the dugout.

But the most obvious feature of this card is current Brewers manager Craig Counsell's batting stance.

How in the world did he hit anything like that?

The immediate answer is the snarky one: obviously, he didn't. He batted .226 in 2008. It says so right there on the back of his baseball card. But it's interesting to me how many changes a player must go through to stay in the major leagues. Batters, especially those who aren't naturals at the plate, are forever fiddling with their stances, maybe not to such a severe degree as Counsell, but you have to adapt to survive.

It makes me think of my own batting stance when I was a youngster.

My stance was the same -- it never changed, except only when I was imitating the stances of famous baseball players (the batting stance guy wasn't the first person to do that).

Whether I was in the backyard, playing with my friends, or in an organized league, I was always the same way. I batted lefty, just like Counsell. I brought my hands back quite a bit, and up a little. Since my arms weren't long, where I positioned my hands would pull my right shoulder back so I was almost peaking over my shoulder. It wasn't severe like Stan Musial, but when I think about it, I wonder why I did that. Still, when I take the stance now, my hands automatically back that way.

My feet were pointed straight toward home plate. Later, I pushed my left foot -- my back foot -- a couple of inches back, in the mistaken hope that it would provide me with more power. All I did was strike out more.

But that's how my stance remained.

Like almost every lefty swinger, I loved the ball down. Low and over the plate. In the backyard, I launched dozens and dozens and dozens of low pitches over the back garage and into our neighbor's garden yard. I always let high pitches go past, especially high and outside pitches. I could never hit those, and they didn't look nearly as appealing to me as a fat pitch around my knees. Those balls were like dessert.

As the years passed, my hitting skills faded in comparison to others. I became known as a fielder, and then, simply not good enough to play. I never tinkered with my stance in a desperate bid to keep up, because what was the point? It's not like it was my job.

Anyway, I'm curious. Anybody else remember what their batting stance was like as a youngster? And did you change it a lot?

Night card binder candidate: Craig Counsell, 2009 Upper Deck O-Pee-Chee, #222
Does it make the binder?: It does.

Tony L. said…
I do remember my stance as a kid -- perhaps not surprisingly, it looked a lot like Robin Yount's closed stance...or perhaps Sixto Lezcano's "Hacking at wood" pre-pitch preparation.

I know everyone in Wisconsin could mimic Don Money, Cecil Cooper, Ben Oglivie, Sixto, Robin, Gorman Thomas (with his incessant picking at the shoulders of his jersey) and even Roy Howell too. Maybe Counsell -- who grew up in Whitefish Bay and whose dad worked for the Brewers -- picked up his stances from too many imitations himself!
May 10, 2015 at 8:36 PM

kid2119 said…
Pretty basic closed stance. Shoulder square to the pitcher, bat about 4 inches over my shoulder and level. Feet straight at home plate, about 5 inches off home, slightly back of the box. I covered the strike zone, but not much power.
May 10, 2015 at 9:15 PM

JediJeff said…
I was righty, though I practiced and only did switch in practice for fun. I would have my back leg bent with my weight back there and my front leg was almost straight. It helped me transfer my motion forward. I didn't hit with power (1 career HR) but I hit well to all fields. I batted almost .500 my final season. When I hit traveling all star that year, the coach didn't like my stance and told me to even the weight on both legs - I think I went 0-4 the first game. Needless to say, I went back to what worked.

BTW - If I recall something I read, I think Craig said he had that weird stance to keep from swinging up on the ball and popping up all the time. Damned if I can find anything that confirms that, though.
May 10, 2015 at 10:46 PM