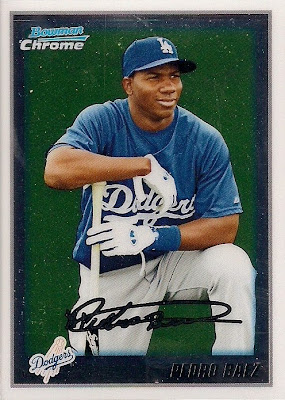 To me, there is no greater change in a player's personality than when one switches from pitcher to hitter, or from hitter to pitcher.

Pitchers and hitters are so different, and they are adversaries. They're on opposite sides of the battlefield. They're also narrowly defined. Pitchers "throw smoke," while batters are "sluggers." Hitters are "scrappy," while pitchers are "crafty." 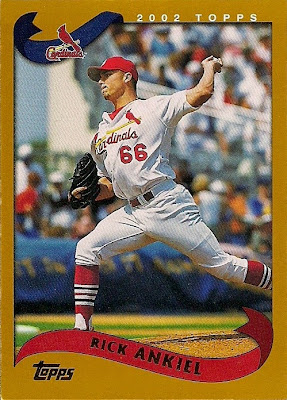 This is why I have held on to this particular card for so long. I'm not a fan of the Cardinals and I'll never try to complete 2002 Topps, but I need something in my collection that says "Rick Ankiel was a pitcher." 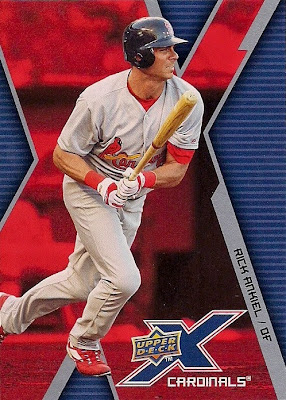 Then I can whip out one of Ankiel's later cards and marvel at his transformation from moundsman to batsman. It's almost as if the brain doesn't compute and treats Ankiel as if he's two different people, a pitcher person and an outfielder person.

It's very cool to have cards like this in my collection.

Which is why I'm extra excited about the development on the Dodgers. 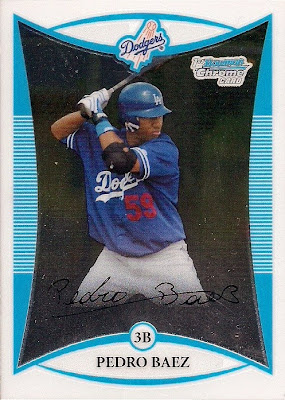 For six years in the Dodgers' minor league organization, he was a third baseman. He didn't make it above Double A and his stats declined steadily each year.

But there was a sign that he could be something more.

He had An Arm.

The Dodgers converted him to pitcher in 2013, Baez was promoted to Triple A in 2014, and he is now a regular member of the Dodgers' revamped bullpen, which is much improved now that L.A. isn't relying on past-prime fire hazards like Chris Perez, Brian Wilson and Brandon League.

Although not a headliner member of the bullpen, it is my hope that somehow Baez finds his way into a Topps Update set -- preferably throwing the ball -- so I can have a baseball personality switch in Dodger blue documented on cardboard.

I know it's a long shot, especially with how the new Dodgers front office rotates players in and out so frequently. And relievers like Kenley Jansen, Yimi Garcia, J.P. Howell and Juan Nicasio will probably get preferential treatment. (Topps Total, where are you?)

But if Baez does get on a card as a pitcher it automatically will be special.

(P.S.: The Dodgers from 2008 Bowman Chrome have done fairly well for themselves: 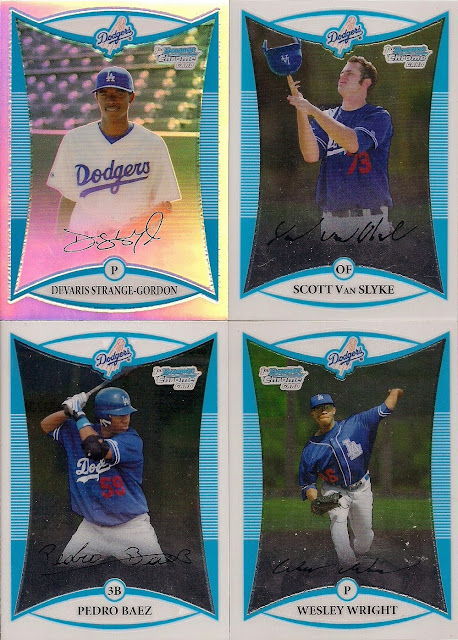 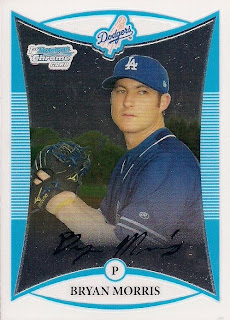 You just have to wait seven years for the cards to mean something).

It was my understanding that "scrappy" was a term used to describe a white player's defense. And "smooth" was the word for non-whites and their defense.
May 4, 2015 at 8:12 PM

Unknown said…
I was excited to see Ankiel's card as a hitter, and hoped that Topps could figure out a way to put both pitching and batting stats on the same card. Alas no, Topps let me down. Maybe they could have had the top section as a pitcher, and the bottom section as a hitter, just put a new header between the stats. It would have been something new and innovative... oh wait I forgot I was talking about Topps.
May 4, 2015 at 10:07 PM

defgav said…
I'm bummed that it doesn't appear Brooks Kieschnick ever got the pitcher-hitter card he deserved.
May 7, 2015 at 3:38 PM