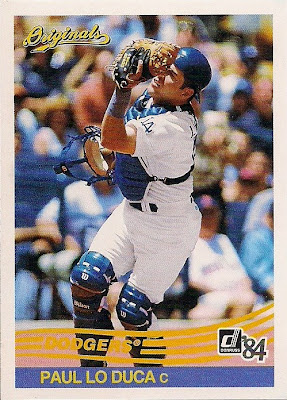 I don't spend a lot of time thinking about the explanations behind people's blog names. But every once in awhile I puzzle about them for a minute or two.

Baseball Card Breakdown is one of them.

The name, I'm assuming, could mean a few different things: Having a "breakdown" over a certain set or card, "breaking down" a certain set or card by analysis, or even manipulating your cards in such a way so they appear to be dancing, thus "breaking it down," as in the parlance of certain early '90s rappers. 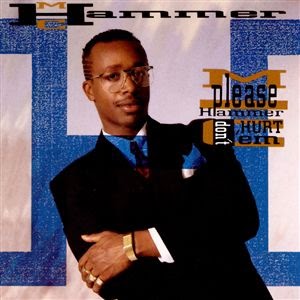 Baseball Card Breakdown's Gavin does all these things, so that's living up to your blog name right there, and I'm sorry I was even confused for a second. After all, this night owl doesn't exactly live up to his blog title these days as I don't post in the middle of the night anymore (I save that for the set blogs).

I received some cards from BCB recently and I'll do my best to break them down here. I can't make them dance, as I don't have Gavin's giffy skillz, not will I horrify you by dancing myself, but I will analyze them card-by-card in such mind-numbing fashion that you'll wish I was dancing. 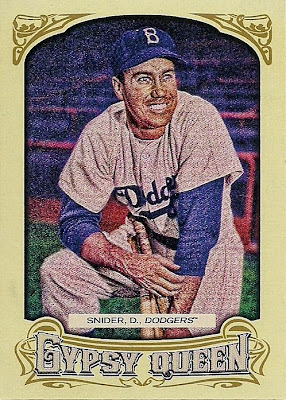 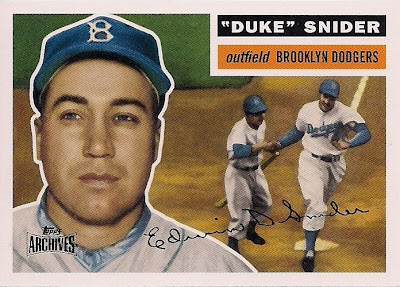 Skip-to-my-lou, let's get started. Here is a couple of Dukies, a Gypsy Queen and an Archives insert from a couple years ago. Big ups to BCC for knowing that I want -- that I need -- Gypsy Queen Dodgers while still reserving the right to despise the set. And the Archives insert completes that 2013 set for me -- plus it allows me to laugh because I have the original card, meaning why do I even require this one? 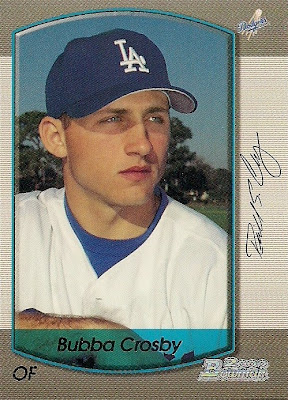 The last Dodger needed to complete the 2000 Bowman set is a guy named Bubba. But he isn't doing anything Bubba-like. No fishing, no playing football, no golfing, no shrimp-eating. Very disappointing. 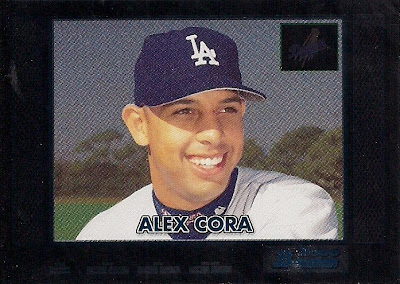 Combine turn-of-the-century foil with modern scanning technology and Cora appears to be displayed on a flat-screen TV. I like it. 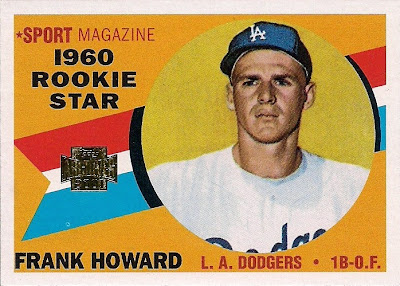 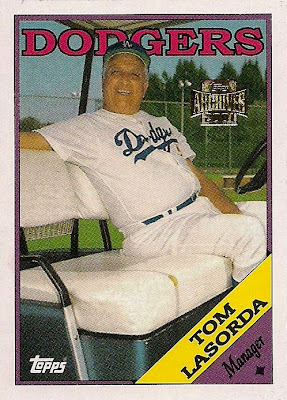 Here are the original Archives from 2001. I know how much Gavin likes Archives sets. While he goes for the very fancy Retired Signatures sets, I'll settle for these cards that I have already, except, um, with a stamp. ... Suddenly, Gavin's Retired Signatures mission makes much more sense. 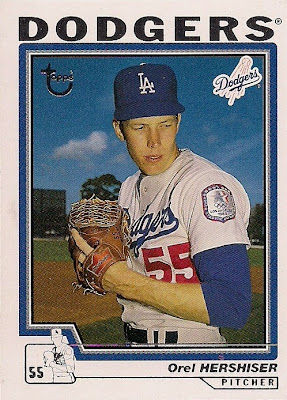 Look at the veins in Orel's arm. That's more effort than is required for a pose on a baseball card. 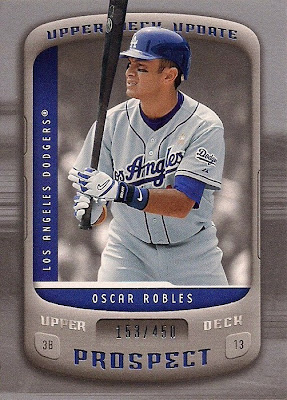 2005 was a world in which players like Oscar Robles were serial-numbered right there on the card front. Let's not go back there again. 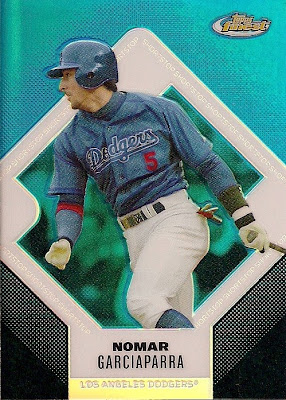 This was the card that kicked off a cross-country package. I absolutely had to have a shiny card of Nomar Garciaparra horribly photoshopped into a Dodger uniform. That's what's known as a "disconnect." Super fancy card, very unfancy photoshopping. 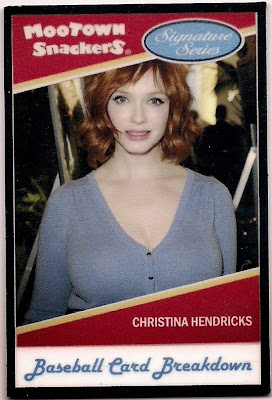 And now we've come to the magnet portion of our card package breakdown.

(P.S.: If you google "Mootown Snackers" you hardly see any cheese products, or breasts. But you do see lots and lots of baseball cards. I think that should be a very large hint to food companies: make more oddballs!).

Now a testimonial: Christina Hendricks made it onto my refrigerator for just a brief period and I can safely say that the magnet sticks. It sticks a lot. I practically had to pry it off the fridge --in a near panic. Our fridge is too good for nicknacks to be stuck to it, even ones as lovely as this one here.

Anyway, thanks, Gavin. That was a spectacular stack of cards and magnets, broken down for all of you without any of the dancing.

You didn't want to see those baggy pants anyway.

Bubba said…
It is quite possible that I have found a new collecting interest outside of Braves and A&G... how many cards do we think there actually are of people named Bubba??? I must investigate.
May 27, 2015 at 6:38 AM

GCA said…
Great idea for a food insert series ~ Mootown Cheesecake! Might have to mock some up myself.