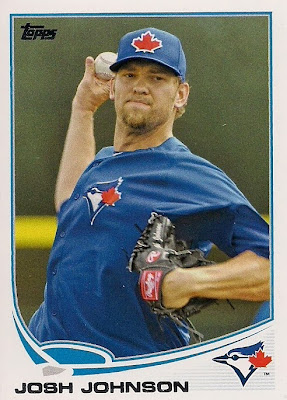 This is me being picky, but if you've read this blog long enough you know that I tend to be picky. And yet you still read this thing ...

I just finished cataloging the Series 1 and Series 2 base cards that I have from 2013 Topps. It is usually at this time that I find whatever weirdness I overlooked when I was originally pulling cards out of packs.

Often, I'll come across something that boggles my mind. Like last year when I found a Wade Davis card in each series even though he didn't change teams, wasn't a star, or hadn't won any awards that would merit a second card. Just two Wade Davis cards for no apparent reason.

And there's been previous examples of that as I mentioned on that post, and others mentioned in the comments.

I didn't find anything like that this time, although it's still possible as I don't have all the cards in the set. What I did find was this Josh Johnson card in Series 2. 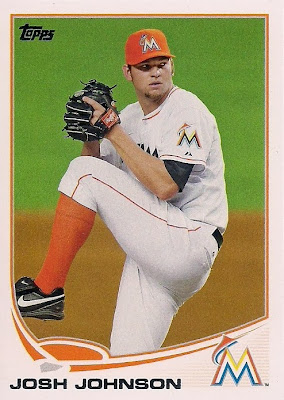 Now, I suppose there is justification for the second card because Johnson changed teams last offseason, so why not get him a card with his new team, right? Upper Deck did this quite often when it was issuing baseball sets.

But Upper Deck's sets were like 1,000 cards. They could do stuff like that. Topps is still refusing to issue cards of long relievers and backup catchers, yet we need an updated Josh Johnson card -- before Topps issues a card set called ... UPDATE.

The better thing to have done, of course, is not issue an outdated card of Johnson in Series 1 and just wait until Series 2 to issue the Johnson card (I know Topps must plan ahead with sets and maybe they couldn't pull the Marlin Johnson in time, but really there has to be a better way to do this).

Issuing a second Johnson card as a Blue Jay just looks panicky. Isn't this what the Update set is for? And how goofy does it look now that Johnson is a Padre? The rush to get him in Series 2 now seems pointless.

Yes, I'm being picky and asking for rigid definitions, like the way things were back in the day, when the way of card sets these days is to issue cards of squirrels and super shortprints and anything goes as long as we get our cash!

Sorry. I just like updated cards to be in Update. 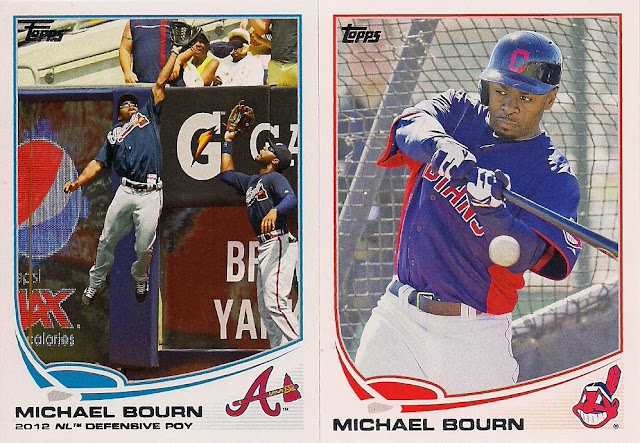 Yet there they are BOTH IN SERIES 2.

One is not his base card. The card on the left is one of those extra "why is this card in the set when my favorite guy off the bench isn't" cards. Cool photo, without a doubt, but pretty much frivolous.

But it's very weird that there are two cards of Bourn in the same series with him wearing different uniforms.

I know Update these days is for five different cards of Strasburg-Harper-Puig and All-Star cards. But I miss when the Update set was for when you waited for guys in their new uniforms mixed in with some rookies.

Just me being picky.

hiflew said…
This isn't great, but it is better than in 2011 with two Jason Hammel "base" cards in Series 2, both with the Rockies. Not to mention the two appearances of Rafael Betancourt in 2013. He is in Series 2 and in Update, both with the Rockies and to make it worse the pictures are just about identical. Topps just doesn't even care, but I guess it has been that way for years now.
December 12, 2013 at 10:20 PM

Fuji said…
You sir are the cardboard professor. It's amazing the stuff you come up with. Keep 'em coming sir. You can be as picky as you want when you're handing out awesome information like this.
December 12, 2013 at 10:55 PM

Anonymous said…
I would really prefer they did the s1 and s2 cards in the player's uniform from the previous year, and any changes in update. That was always what Update was for. But that's probably just me being old and stodgy.

The Bourn card makes sense to me because it's a subset showing him winning Defensive POY. It makes sense they put him in his old uniform for the subset - he won the award with the Braves. But I wish he didn't have an Indians card until Update anyways.

I also wish the subsets looked different from the base set. I'd still incorporate pieces of the base design, but do something more to make them stand out!
December 13, 2013 at 7:47 AM