December 01, 2013
I have received two of those card patch things in separate packages recently.

This one arrived from Base Set Calling: 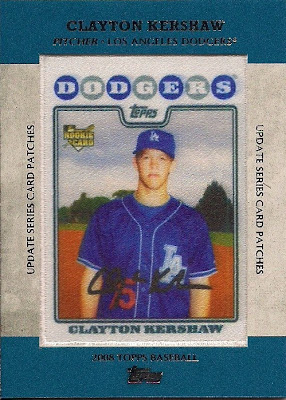 This one arrived from The Card Chop: 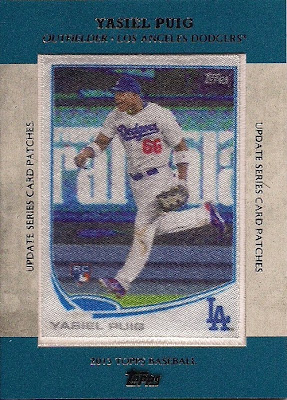 You can apparently find these in blasters of this year's Topps Update. I wouldn't know first-hand because I refuse to buy a blaster of Topps Update.

I don't consider these a prize for forking over $19.99 for a bunch of guys who aren't even in those jerseys anymore (enjoy the Minnesota Aprils, Ricky Nolasco). Give me a three-card pack of parallels or an extra pack (besides the seven packs plus 1 bonus pack, I mean). That might get me to buy a blaster (no it won't).

These patch things are better than what Topps once placed in blasters as a bonus, those manupatch stitchings of World Series logos. They are replicating actual cards, after all. It's more interesting. 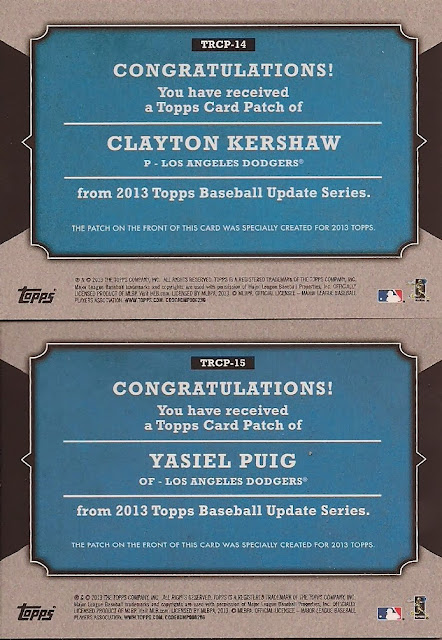 But don't congratulate me. I don't put this on the same level as an autograph or even the now-tarnished relic card.

And therein lies the problem. These cards are so thick that they don't fit with my conventional storage methods. I store "non-hits" either in binders or in a box with no card protection. I suppose I could store them with my other cards without any protection. But they're Dodgers cards and all of my Dodgers cards, except for dupes, are protected. And if I'm going to throw one of those toploaders around them, then they're automatically included with all the other toploader cards, meaning relics and autographs and other snazzy things. And I don't consider them worthy enough to hang out with those cards.

Wow, I sure do overthink things sometimes.

But that's why I say I don't know what to do with these things. There's no tidy place where I can compartmentalize them.

But that does NOT mean I don't want them.

I do want them. I want everything Dodgers that is in some sort of card format.

In the last five-plus years, I have never traded, sold or discarded any Dodger collectible that was not a duplicate. Sure, some of it may not fit 100 percent into my collection, but I'll figure out a place for it. It just may take me awhile.

So I guess when I do find that spot, then you can congratulate me.

Hackenbush said…
I pulled the Koufax out of a blaster and I was jazzed. I'd tell you what I did with it but I have no idea where it is. I do like the World Series/All-Star Game patches (at least some of them).
December 1, 2013 at 7:31 PM

hiflew said…
I would be happy to explain how I store them, but the Rockies have never once been honored with a single card in any of these manupatch deals. Sorry if that came off whiny, but it is a sore spot. Especially when I see Puig's rookie card that can be gotten in the exact same blaster being honored before Helton or Tulo. Oh well, so is the life of the small market fan.
December 1, 2013 at 10:25 PM

Play at the Plate said…
I store mine in those top loaders that are designed for thicker cards, but I've never bought any of those. I sometimes get them in trades so I hold on to them for those occasions.
December 2, 2013 at 12:22 AM

Need More Cardboard said…
I generally put them in a penny sleeve. I agree that they are not really worthy of a toploader but a penny sleeve provides enough protection to keep me from feeling guilty.
December 2, 2013 at 1:01 AM