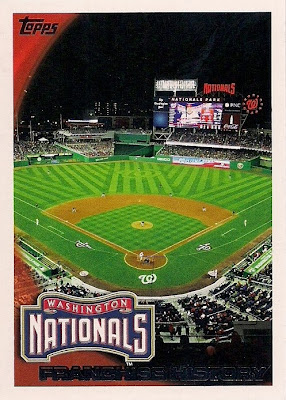 The photo on this card was obviously taken from the press box or a luxury box at Nationals Park.

For a brief instance when I pulled this card back in 2010, I thought it was taken from the very top deck behind home plate (I have little knowledge of the Nationals stadium, I don't even know if there are seats above the press box). Those seats interest me because I've never sat in seats high above home plate -- other than in the press box -- during all my times going to games.

A brief rundown of where I've sat:

Behind home plate: At the Blue Jays' stadium for a game between the Blue Jays and Yankees. Cozy seats.
In Section 36: At Fenway Park, of course. The outfield bleachers are a great place to watch a game, one of my favorites.
High above right field: At old Veterans Stadium in Philadelphia. I felt like I was barely in the ballpark. And there was no hope of seeing the ball.
Behind the first base dugout: Again at Fenway Park. About three rows in. Had to get over the momentary fear of Wade Boggs airmailing a throw in my direction. But after that, everything was great.
In the press box: I've resided there a number of times -- three times in particular at old Olympic Stadium in Montreal, as well as in other stadiums from major to minor. You can't beat the view and the food's free. But the atmosphere is lacking.
Down the third baseline: I've probably sat here more than in any place you can sit in a stadium. I like the perspective for some reason and if you're sitting with people who don't really know baseball, and you're closer to home than third base, it's the right area to stay away from foul balls. I've got enough I want to see without having to defend people, too.
In the mezzanine: As a kid, I always wanted to sit in the mezzanine area, just because I didn't know what "mezzanine" meant and it sounded cool. Well, lucky me, the first major league game I saw was in Yankee Stadium and we got to sit in the mezzanine level. I was beside myself.
In the luxury boxes: OK, so there wasn't a game going on and it was during a tour of Camden Yards. It was still pretty cool to see how the snooty people watch games. But I can also see how it'd get pretty boring after a couple innings. I guess that's why there's booze in those boxes, too.
Way up high behind home plate in a tiny box with room for just one person after climbing a ladder and squeezing your body through an opening in the bottom of the box: Covering minor league baseball isn't as glamorous as it seems.

If you count all the games I've attended from Little League to high school to college to the pros, you'd think I've sat or stood everywhere you possibly could.

But I know there are several areas where I haven't sat and those will be goals of mine for future games.

Sitting in the same place every time? That's what you did in junior high when you had assigned seats in homeroom.

Night Card Binder candidate: Washington Nationals franchise history, 2010 Topps, #282
Does it make the binder?: Admit one into the stadium.

Anonymous said…
The press box at Nationals Park is pretty high up, and I'm thinking that's where the photo was taken. They weren't about to compromise on the view from a luxury box just so the media could actually see the game....

The upper deck at the Vet was quite the vertical setup. Years ago I sat near the top, and I remember the stands being very steep at that point. I could've used the heads of the people in front of me as a footrest (in theory).
December 28, 2013 at 10:17 PM

deal said…
confirming shlabotnik - Everytime the Phillies are in DC, the broadcasters bitch about how high up the box is. If there is a high pop up they say something like "That one almost got up here, but not quite"

Going forward viewing that cards is going to make me sad - Harry Kalas died in the Nats Pressbox.
December 29, 2013 at 12:41 PM