So, I guess I'm collecting this now 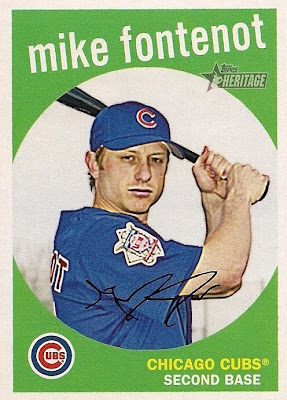 I'm still working on the 2008 Topps Heritage set. How many times have I said that in the last five years? A dozen? Two dozen? I'm sure it's more than that.

There is one thing keeping me from completing this stupid thing (yes, if I'm still attempting to finish a modern set after five years, its official name is "THIS STUPID THING."). Of course, it's the short-prints.

I'm either 10 cards or 11 cards away from completing the set -- my want list says 10 but I just counted the binder and it says 11 -- and I have almost no incentive to find the rest of the cards because I won't spend the going rate on a 2008 Heritage SP. If I'm going to blow more than a buck on a card, it's either got to be a Dodger or something vintage. The remaining 2008 Heritage cards I need ain't either.

So, there they sit. To be completed ... someday.

Recently, Dave K. sent some needed '08 Heritages for the cause and it was greatly appreciated because I think everyone's forgotten about the set.

But then he sent a whole smackeral of '08 Heritage High Numbers, too.

How many is a smackeral? 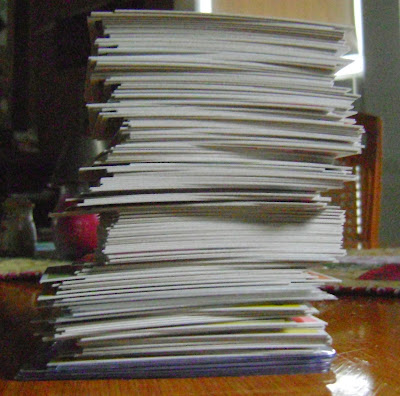 Now what am I going to do with that?

Like many collectors at the time, I really liked '08 Heritage but I didn't have any interest in '08 U&H at all. 2008 U&H was just an unfortunate continuation of the '08 base set that I had been bagging on for nine months already.

But here Topps was trying to force us to buy both.

I admit, I was a lot more gullible at that time and I bought a few packs that included the Heritage Highs and the U&H. I still have those U&H cards that include some of the worst things I've ever seen on artificial cardboard. But after those few packs, I finally had enough and moved on to something easier to collect, like (*ahem*) 2008 Stadium Club.

I had since long given up on trying to finish the High Numbers set and didn't care whether I finished it at all.

And then Dave stepped in.

Oh, and he knew what he was doing, too:

Apparently all of us set collectors think alike.

So, I went through the large stack of High Numbers and found 105 cards that I needed for the set.

Here are a few: 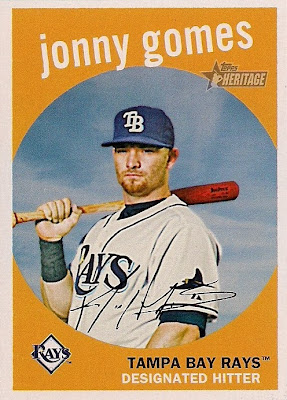 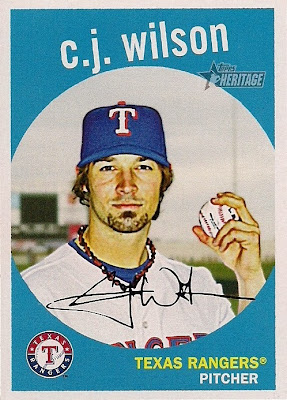 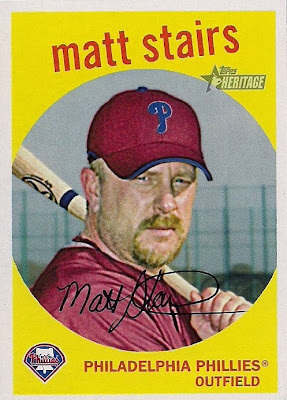 The cards are the usual end-of-the-year Update assortment of rookies and hangers-on. Eric Patterson, Ivan Ochoa, Brian Buscher, Joe Inglett. Who are these guys?

But there is a nice collection of rookie stars: 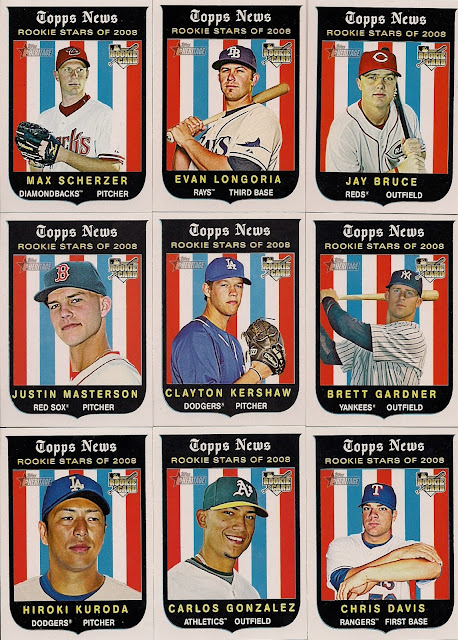 And a not-so-nice collection of "rookie stars": 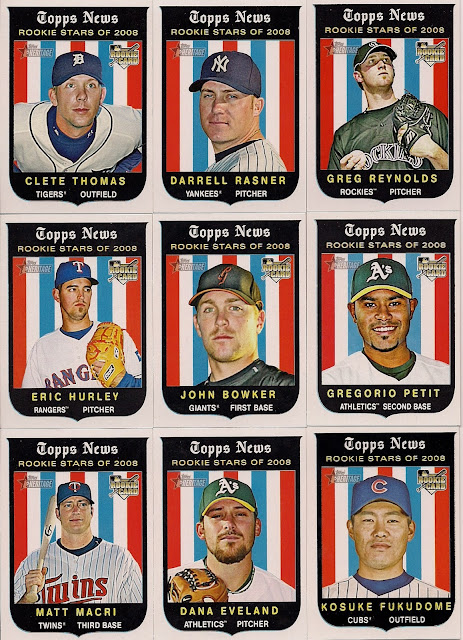 I don't plan to pursue the High Numbers any more vigorously than I have the base set. My guess is there is a whole lot of short-prints in there and I just don't have time for that (I don't even have time to look up what's an SP and what's not).

But Dave says they dumped a whole bunch of '08 Heritage Highs in his neck of the woods so maybe I'll be able to complete this set yet. Maybe I'll actually be inspired to go online and hunt for those few remaining cards.


(P.S.: If anyone is attempting to complete the High Numbers set or just has team needs from the set, I have 120 or so dupes).

madding said…
2008 Heritage is pretty much what brought me around to the idea of set collecting, so of course I never finished it. I actually did pretty well on the High #s (missing 11 SPs) but not so well with the main set. And, of course, the one SP that I have available to trade is not one you need.
December 11, 2013 at 9:29 PM

Steve Gierman said…
I'm still working on this set as well. The addition of the high numbers threw a wrench in the completion of this set.
December 11, 2013 at 10:05 PM

Captain Canuck said…
I'm assuming I need the Bravos from that release.... but I have no idea what the checklist is, so no clue what they are or their numbers.
December 12, 2013 at 12:38 AM

night owl said…
I'll figure out what Braves I have and send them off, Captain.

GCA said…
I started '08 Heritage when it was new. I think I got my last two high numbers for the full set this year. I started 2013 Heritage shortly after that. Worst part is, the 2013 set will probably never be finished since Topps had the gall to make the Heritage update set an unbelievably overpriced online exclusive, basically making it unattainable. I'm sure there won't be people with sets or singles later for any better prices.
Pretty sad when they make us wish for the old days when we only had to waste a part of the cost on split packs of a product we already had or didn't want to get what we're after. Now you have to pay several times the cost to even get any at all.
December 13, 2013 at 2:28 PM