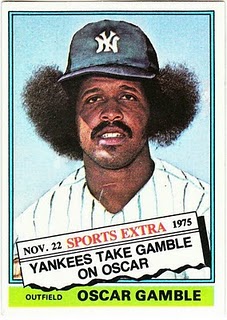 There are some cards that are so legendary, or iconic, or whatever that you want to call them, that they overshadow every other card of the player who is on that beloved card.

For example, how many people are aware that Gus Zernial had another card besides this one? It's so ingrained in collectors' minds that anything else isn't worth discussing.

I thought the same fate had avoided Oscar Gamble, because as a child collector in the '70s, I knew all of Gamble's cards all too well. They were all terrific, amusing and well worth the few coins I plunked down for a pack. The Afro had yet to become the nostalgic touchstone that it is now, but Gamble certainly had a few cards that stood out.

As the '70s slipped farther into the distance, Gamble's 1976 Topps Traded card grew larger in prominence, among younger collectors who couldn't believe that people looked that way back then, and among older collectors who longed for the days when people would actually walk around with a comb stuck in their hair.

The card was so popular that it is considered by many as the card that best represents the 1970s. It dominates the collecting conversation anytime Gamble is discussed. And then something got me concerned.

On Condition: Poor's blog, the following was asked: "Was anyone out there aware that Oscar Gamble had other cards other than his 1976 Traded card? I wasn't."

Uh oh. If that was the case with lots of collectors then I feared the worst. Gamble's great cards were being forgotten, overwhelmed by the giant that is the '76 Gamble traded card.

So, I decided to do what I always do: determine which 1970s Gamble card was the best and put up a poll.

With all of these "Best of the '70s" polls, I have stuck to the main Topps issues from 1970-79. No traded cards, no Kellogg's cards, no Hostess cards, no oddballs. I was tempted to do the same with Gamble, and eliminate his '76 Traded card. But I feared there would be a revolt among collectors.

So, the Gamble Traded card is one of the selections for voting. I'm making this one-and-only exception.

But I'm hoping by seeing all the other '70s Gamble cards that a few of the others will stick in your head as just as worthy as the Gamble traded card. His Afro, after all, did last throughout the '70s.

Because I'm short on time, as usual, I had to use scans borrowed off the Topps Giveaway site. For the record, I have all of the Gambles pictured here, except for the 1970 and 1973 cards. 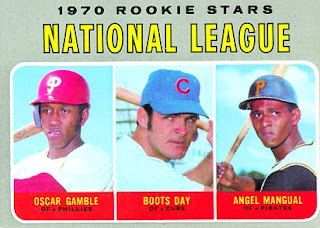 1970 Topps: Gamble was just a tyke here. But he pairs with two others to present one of the best first-name trifectas in history. Oscar, Boots and Angel. That is far out. 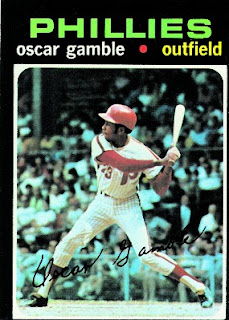 1971 Topps: This is a favorite of mine, because it's a great action shot and Gamble just does not look like the Gamble that I know. 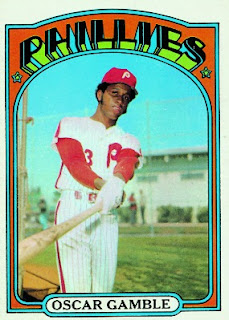 1972 Topps: Gamble's growing out the hair a little, but check out that swing. I'm not buying that swing. 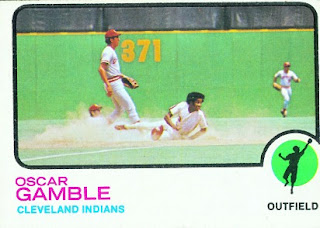 1973 Topps: One of the cards that defines the 1973 set. You can see that Gamble is now featuring the 'fro that we know. But the best part of the card is 1) the Reds guy sinking in an apparent quicksand of dust, and Gamble being airbrushed out of his Phillies uniform, so it appears the Indians are playing the Reds (long prior to interleague play). 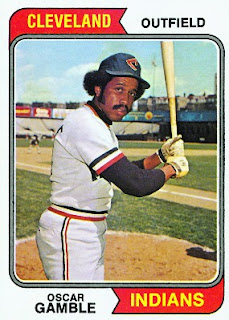 1974 Topps: Here is Gamble in Yankee Stadium, a sign of things to come for Oscar. 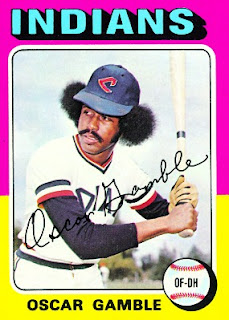 1975 Topps: My favorite Gamble card. I've featured this card about 10 times between my two blogs. It's just the total package and I think it represents the '70s just as well as the '76 Traded card. 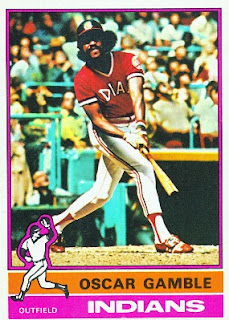 1976 Topps: This is kind of a wild photo. There is a lot to love, from Gamble's helmet mashing down one half of his Afro, to the strange batting pose, to the red jersey top, to the appearance of Gamble smiling about the whole thing. 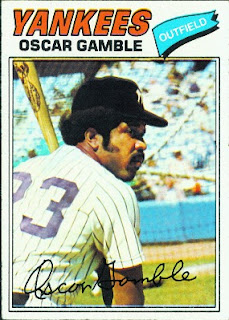 1977 Topps: Here is Gamble as a Yankee. He almost looks bad-ass in this photo, which isn't really Gamble. He seemed more of a laid-back kind of guy to me. 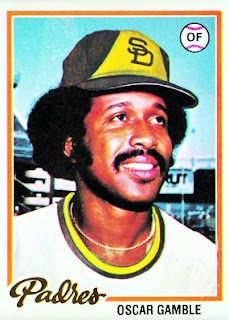 1978 Topps: Another famous Gamble card. He is hastily airbrushed into a Padres uniform and cap even though it's obvious he is standing in Yankee Stadium. Gamble seems amused about it. 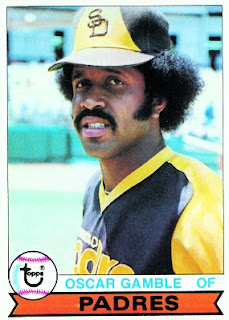 1979 Topps: The Afro lives on and is now accented by the terrific gold-and-brown uniforms that the Padres wore at the time. Great card!

I think it's pretty obvious that Gamble had multiple great cards, and if it were me, I might have a little difficult time choosing. But it's not up to me.

The poll is up on the sidebar. Does the '76 Traded card deserve overwhelming support, or does something else make your hair stand on end?

Either way, I hope you'll agree that there are plenty of Gamble cards worth remembering.

Anonymous said…
I can't believe some people didn't know Gamble had other cards... the guy was a solid player for over a decade.

I went with the '76 Topps base set. That swing & the wild hair flinging is just great. Tough decision though, 'cause the '75 card is awesome 'cause it makes him look like Mickey Mouse LOL

Slangon said…
I'd just like to point out that when I said that I wasn't aware that Oscar Gamble had any other cards, I was just being a wise-ass. Of course I knew that he had other cards, but his '76 Traded was just so well known that it seemed as if none of his other cards existed.