December 08, 2022
(Good evening, it's National Brownie Day. I am a simple man, I prefer brownies without nuts, frosting or any other weird experiment bakers want to try. Naked brownies are perfect as they are, don't try to change them. Time for Cardboard Appreciation. This is the 315th in a series): 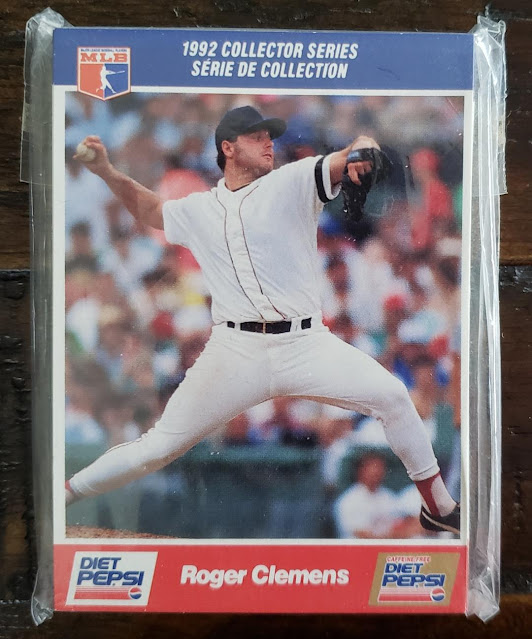 I thought it would be nice if I could leave the 1992 Diet Pepsi set that Angus gave me in its packaging. I figured there were no Dodgers in the set that I needed, why not take a quick look through the 30 cards and then put them back in the package forever?
But of course I'm incapable of doing that.
I was shuffling through the cards quickly, taking note of who was in the set and how they looked without any licensing, when a card leapt out of my hands and punched me in the head: 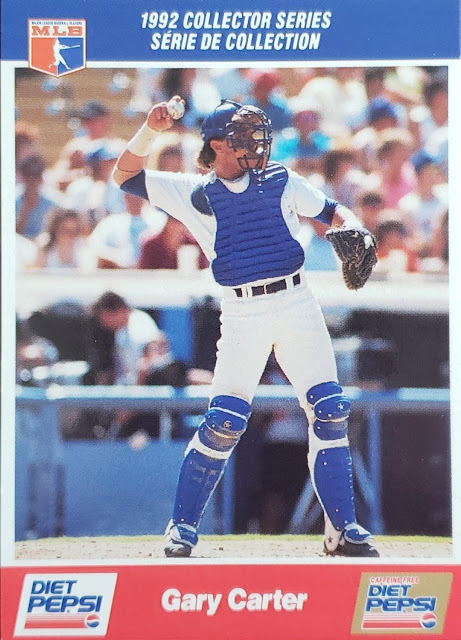 There were two reasons for this. First, I realized that Brett Butler, as I had mentioned in my previous post, is NOT in the set, which meant there were no Dodgers in the set.
Second, there ARE Dodgers in this set because Gary Carter is a Dodgers card!
But it took me a little while to confirm it. There is absolutely no reference to a team on these cards. Nothing about a team name, nothing about a team city. If you turn over to the back ... 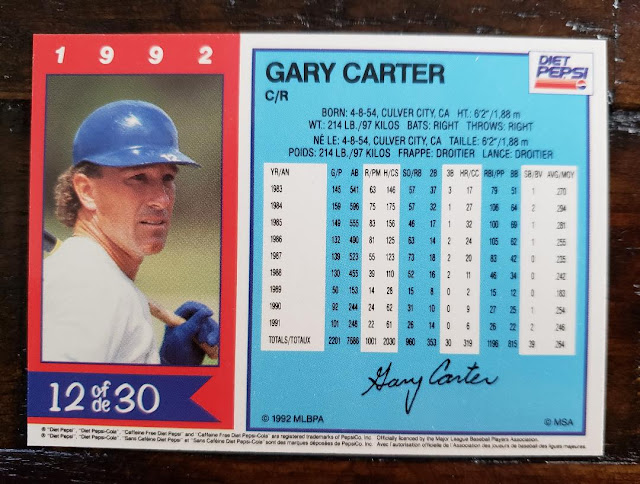 Zero team representation. How weird is it to see no city or nickname after the years in the individual stats? (This set was licensed by the Major League Players Association but not MLB).
So the traditional indication of what team employs the player is missing in this set.
But if you look at the photo on the front and have any kind of familiarity with baseball stadiums, Carter clearly is in Dodger Stadium. And that is clearly Dodger equipment Carter is wearing, the helmet, chest protector and shin guards are all Dodger blue. It's also a clean, white Dodger uniform.
So, there you go, there's a Dodger card in the '92 Diet Pepsi set.
But not everyone agrees. 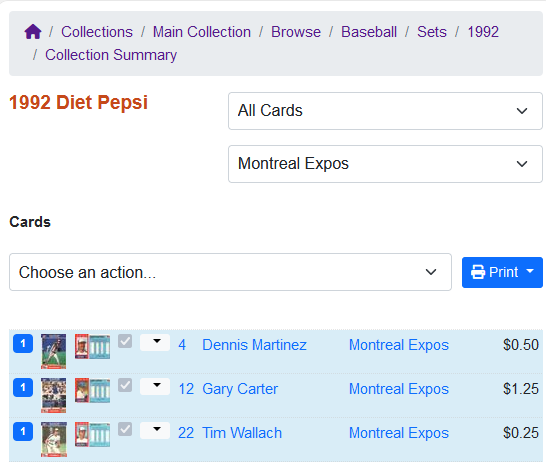 Trading Card Database says he's a member of the Montreal Expos for this card, even though there's absolutely no indication of that on the card.
This is likely because Carter was acquired off of waivers by the Expos prior to the 1992 season for his final year. He played in exactly 92 games for the Expos in '92. The set was released in '92, with packages of Diet Pepsi (maybe in another way, I don't know, I don't live in Canada), so technically Carter was in an Expos uniform when people were buying their Diet Pepsi that year.
But it's not a consensus. If you do a COMC search for 1992 Gary Carter Expos cards, this card doesn't come up. If you do the same search for 1992 Carter Dodgers cards it doesn't come up either. But if you search for 1992 Gary Carter cards, it shows up.
Still, looking at the card, there's only one team I see and that's the Dodgers.
As for the rest of the set, it suffers a little bit from the lack of a license. It's not as exciting as other food issue cards from the '70-'90s and I think it's because the company logo is downplayed. Some of the cards are almost as off-putting to me as current Panini products. 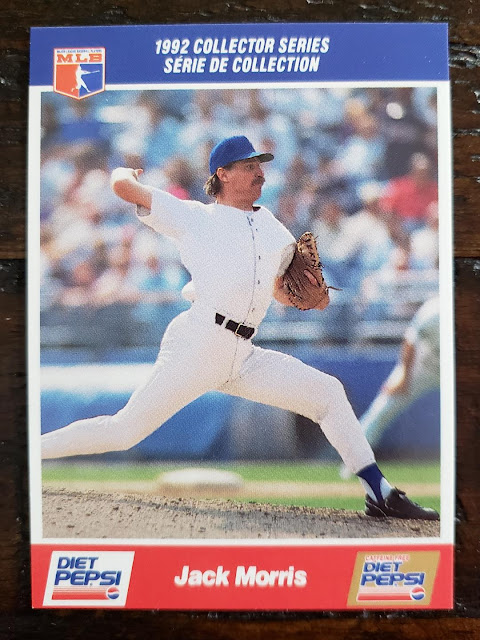 Stuff like this.
But the set does a very good job of hiding team logos on a lot of its cards: 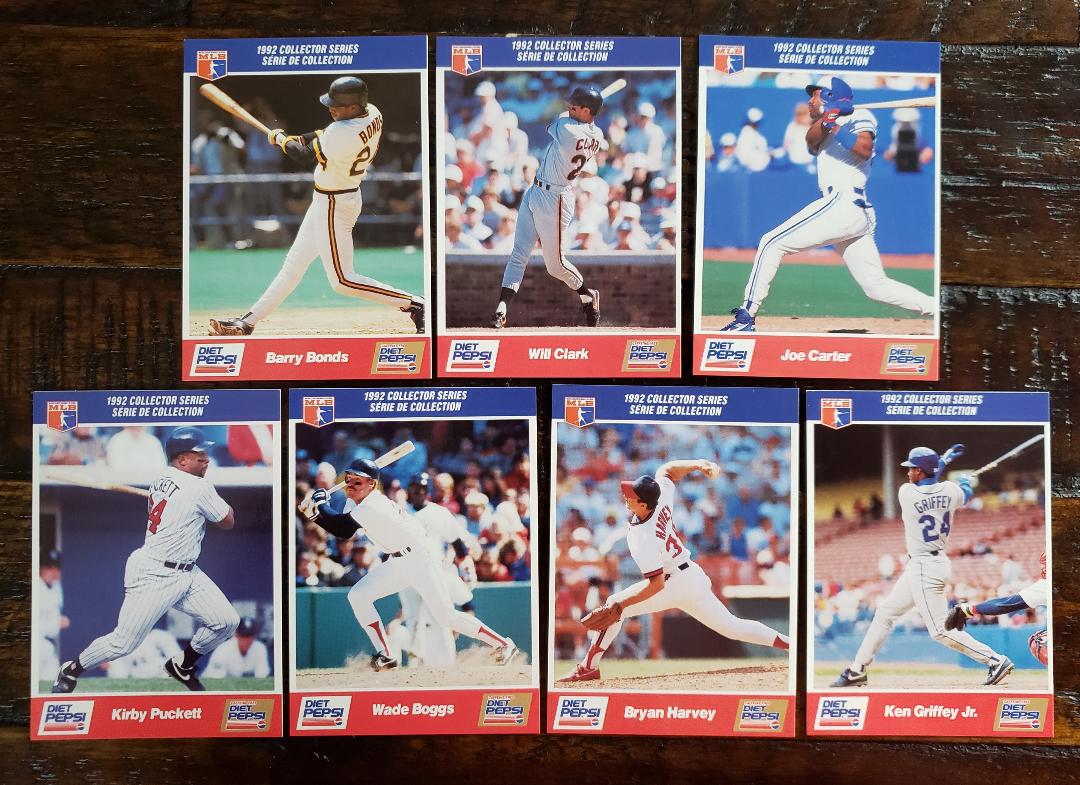 Some of the better ones. 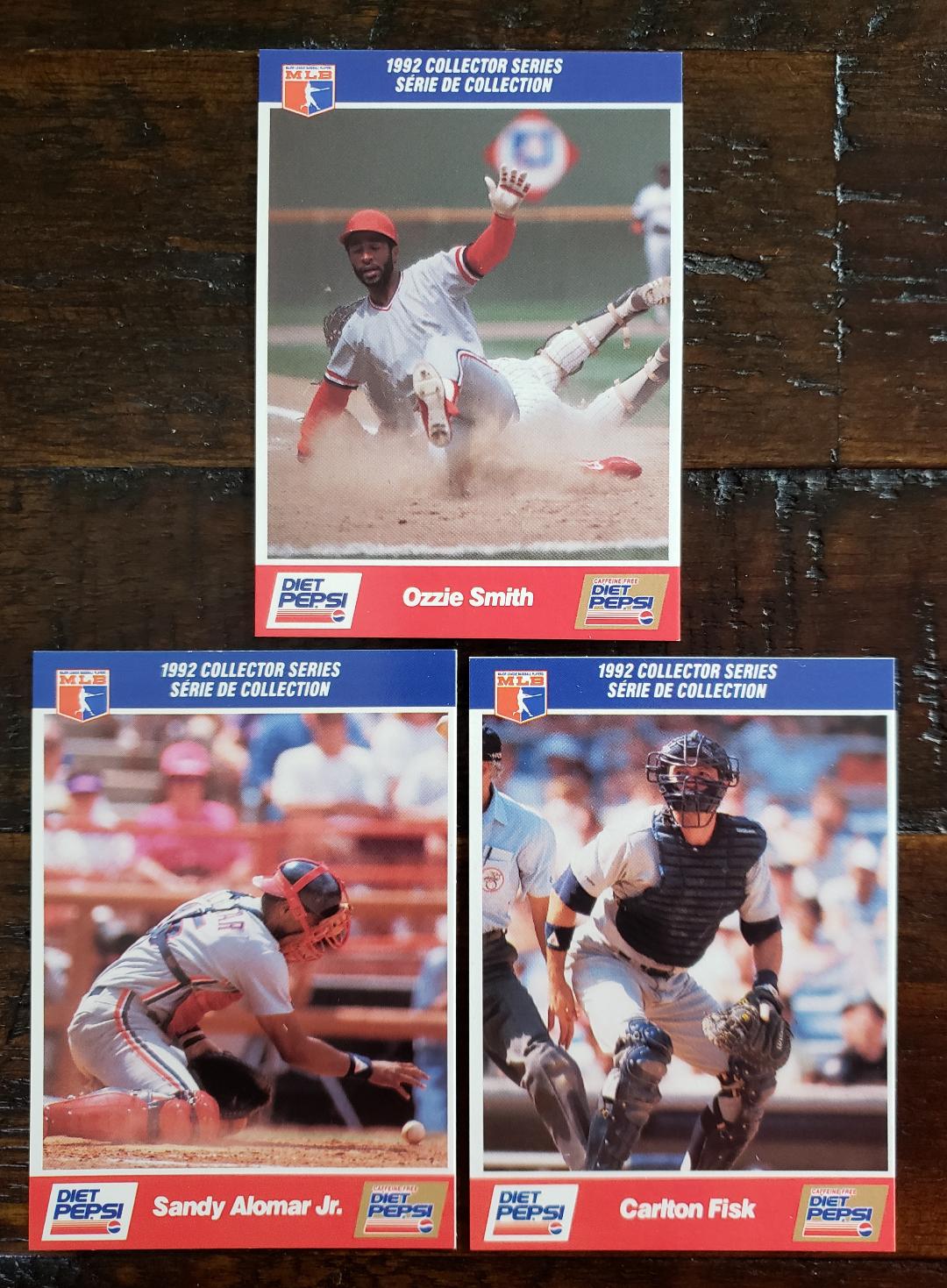 And some kinda cool ones. The Ozzie Smith is the card of the set.
So, now that the set is opened and not going back into the wrapping, I'll be adding it to my food-issue oddball binder.
But since I've established there's a Dodgers card, I now need an extra Gary Carter to complete the set because this one is going in the Dodgers binder.

Angus said…
The Carter is definitely a Dodgers card.

Nick said…
I grabbed that Carter in a COMC order recently and I didn't notice it was a Dodgers card until I had it in-hand. I just saw "oddball AND Gary Carter?" and knew I needed it. The rare Carter Dodger sighting is icing on the cake.
December 8, 2022 at 8:22 PM

Brett Alan said…
There can't be too many cards sets of active players which don't have any indication of the team at all! Obviously modern Panini and such don't have the nickname, but they always give a city name. In the junk wax era and before even unlicensed sets usually gave the full team name. I've seen cards of retired players with no team name, but active players? Very unusual.
December 8, 2022 at 11:04 PM

bryan was here said…
One of my favourite MLBPA-sanctioned sets from the late 80s-early 90s. Nice action shots and some classic photos, the Jose Canseco card photo dates from 1986!
December 8, 2022 at 11:16 PM

Nick Vossbrink said…
Have the Will Clark. The facsimile sig on the back looks NOTHING like his autograph. Which is kid of amazing.
December 9, 2022 at 1:22 AM

OhioTim said…
I have never seen that set before. That is one of my favorite things about this awesome hobby. Seeing cards that one never knew existed before. Thanks nightowl!
December 9, 2022 at 8:22 AM

Derek said…
These were distributed in packs of 3 cards with cases of Diet Pepsi and caffeine free Diet Pepsi
December 10, 2022 at 2:44 PM

Fuji said…
I was intrigued that COMC didn't list this Carter as being an Expos or Dodgers card, so I searched it up. That led me to looking at all of the other cards in this set. There are so many great action shots... and some are actually well-cropped action shots (Ripken, Sandberg, Glavine, Canseco, Larkin, Clark, Puckett, Henderson, and of course Carter).
December 10, 2022 at 3:03 PM

Jon said…
Hopefully one of the higher up's on the TCDB will correct the sites info now that you've proven it to be wrong.
December 12, 2022 at 8:25 AM