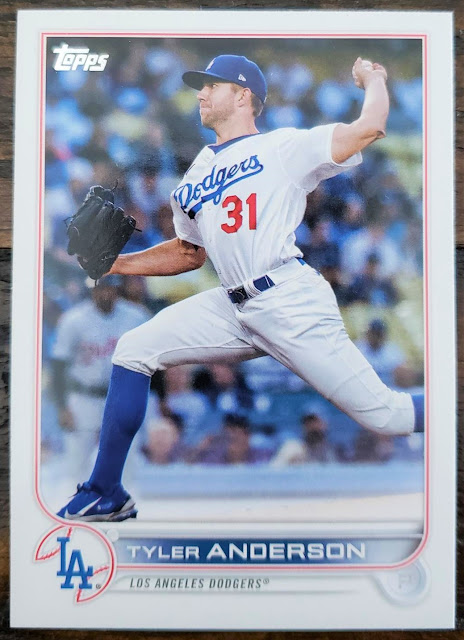 My Dodgers team set order for 2022 Update arrived in record time the other day. I swear I had barely pressed "go to checkout" when it arrived at my door.
The one card I was looking forward to the most was Tyler Anderson, as he was the most-efficient surprise of the Dodgers' season. But true to the pace that MLB operates at now, Anderson had already shed his Dodgers uniform for an inferior Angels one by the time I got my first Tyler Anderson Dodgers card.
I can't help but think that Anderson's quick move to that other L.A. team came about because Dave Roberts removed him too quickly in the key Game 4 of the NLDS against the Padres. Anyway, something was up to make him move on almost immediately.
But that's the rate of MLB transactions these days. Anderson isn't the only one no longer on the Dodgers in Topps' so-called "Update" set. 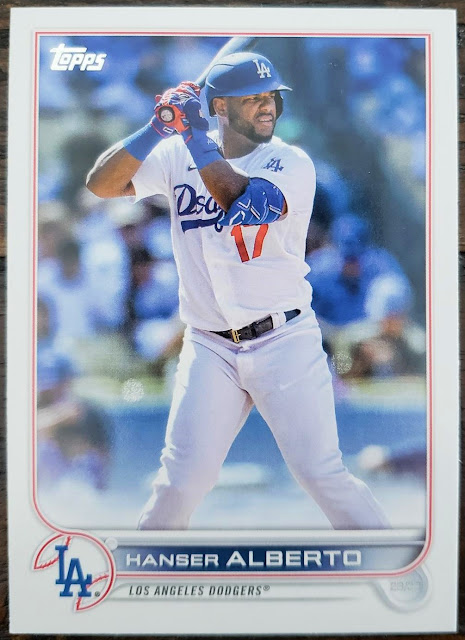 Hanser Alberto's option was not picked up by the Dodgers, which means he can sign elsewhere. It's possible he's back with the Dodgers, but doubtful. 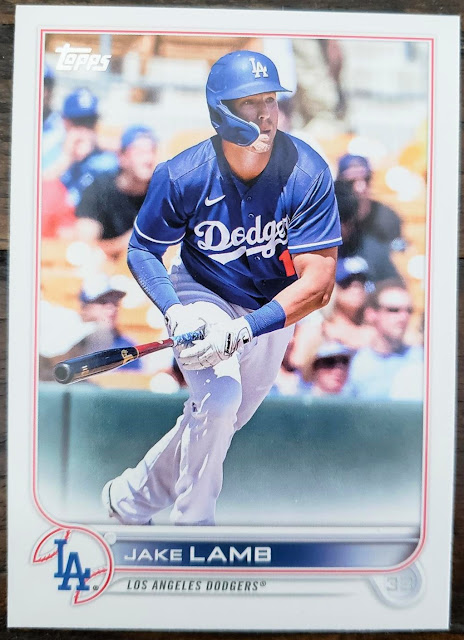 Jake Lamb was traded by the Dodgers to the Mariners way back in early August. 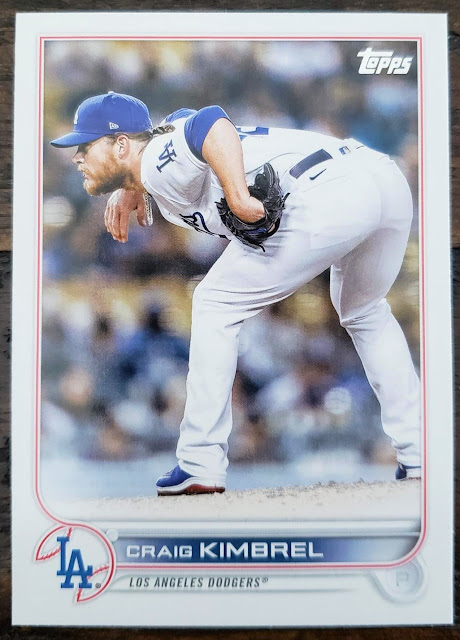 Craig Kimbrel is a free agent after a super-rocky season with the Dodgers. I can't believe he's only 34. I could've sworn he was four or five years older. 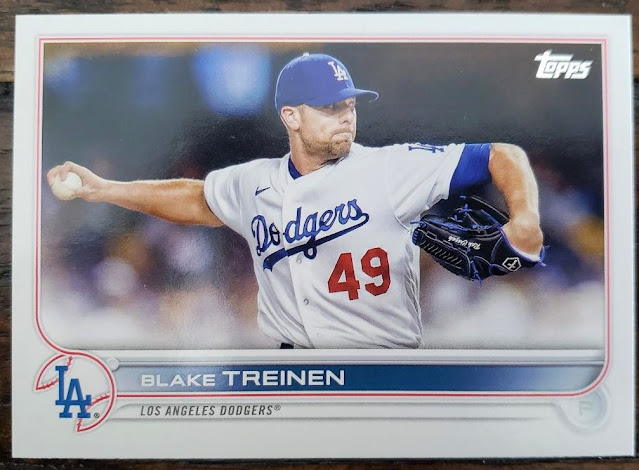 Blake Treinen barely pitched in 2022 due to shoulder injuries and now that he's had another surgery, he's likely to miss the entire 2023 season.
So some of those cards are already in need of an update, but it's nice to have a card representing their Dodgers days, particularly Anderson, Alberto and Kimbrel.
Here are the rest of the Update cards that show current Dodgers: 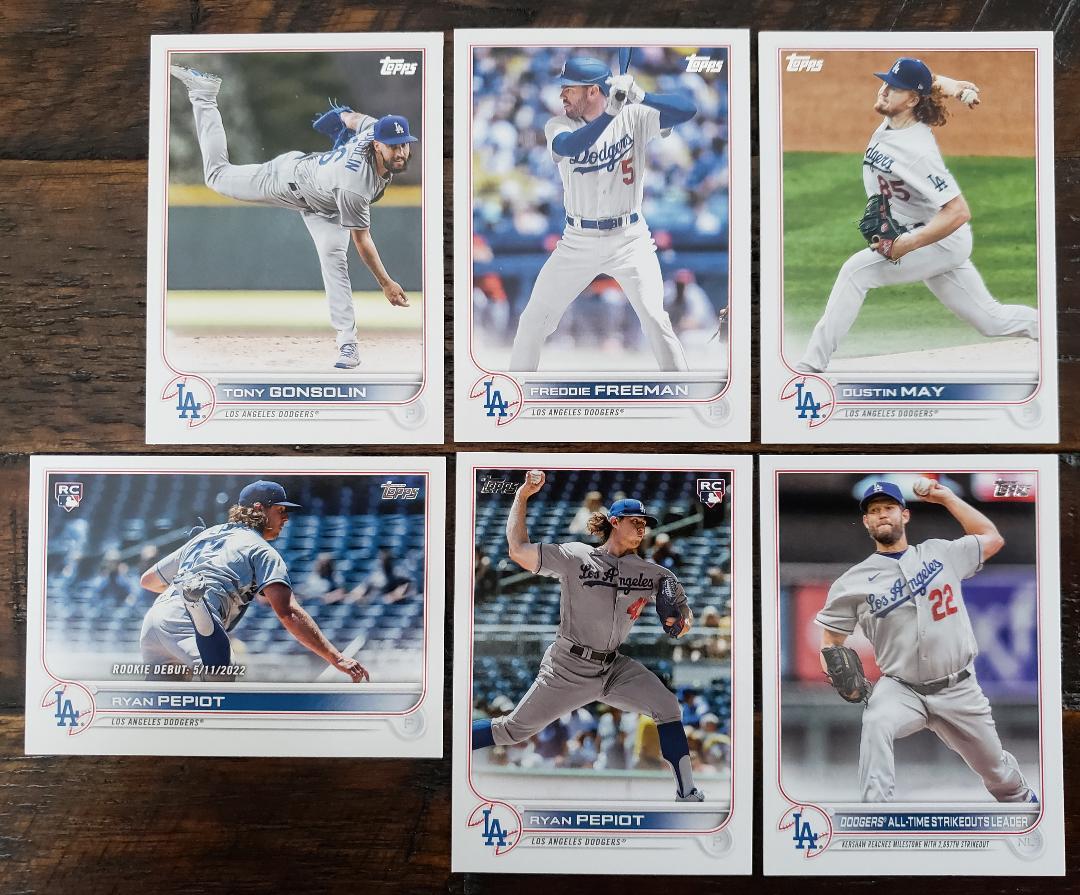 The Kershaw card is a checklist card and it's nice to get one recognizing his strikeout record.
The Gonsolin and May cards probably should have been in Series 1 or Series 2, although I know Topps saves players to beef up Update, probably as an enticement for collectors like me who don't give a fig about rookies. I really like the Gonsolin card, it could've battled Max Muncy for my Topps Dodger Card Of The Year if it had been in the regular flagship series.
Of course there are two cards of Ryan Pepiot. Topps has been doing that extra "Rookie Debut" card for a few years now, continuing to prey on rookie collectors.
Also I can't forget the Freeman card. It may be my 6th or 7th Dodger card of him but in some ways this is the first Official Freddie Freeman Dodger card.
That's how fast the baseball card market moves, too. You're already receiving cards of players in their new uniforms before the base set has a chance to produce one.
This will be my only purchase for Update, aside from whatever Dodgers inserts or parallels I acquire in the future. This set is always disappointing to buy in blaster form.
So this is me stopping to look around at Topps Update, so I don't miss it. Because MLB life -- and hobby life -- moves pretty fast.

Johnnys Trading Spot said…
I've yet to get all of my Braves Update. They're in carts, but not pulling any triggers at the moment.
November 23, 2022 at 8:28 PM

Jeremya1um said…
If you take out the checklist Kershaw and cards of guys like you said who should’ve got into Series 2, you could really count only the 2 Pepiot cards as the only Update cards of current Dodgers.
November 23, 2022 at 9:45 PM

Jafronius said…
Rookie Debut cards are lame, but it seems Topps chose more unique pictures for them this year...maybe it's me though.
November 29, 2022 at 8:40 PM