That's a lot of yellow 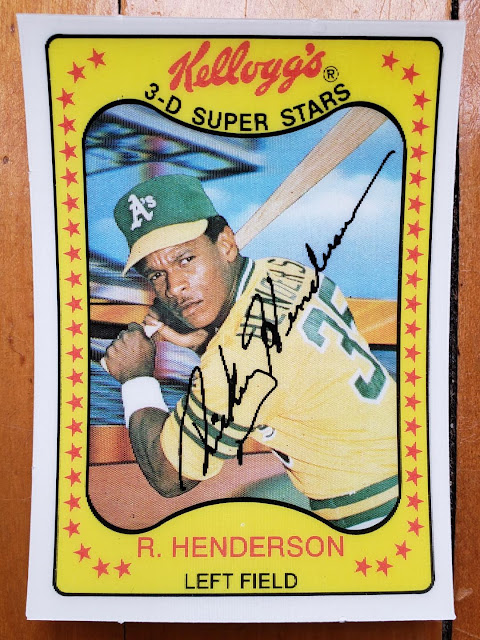 You guys probably know Jay, from the blog Card Hemorrhage. A couple of weeks ago I received an email from him informing me that he was getting out.
He said the hobby hadn't stuck for him and he was looking for advice on the best way to sell off his collection. He sent along a list of his inventory, and I did my best to give him a plan of attack.
But before he started selling his cards to complete strangers, I swung a deal for one item on his list. I'm now the owner of a complete, and pristine, 1981 Kellogg's 3-D set.
This set gives me a run of complete Kellogg's sets from 1976 through 1982 and it's the second one I've "completed" this year (I don't know if buying a whole set in one shot can technically be considered "completing"). It's fired me up enough that I've started looking around again -- a little bit -- at pre-1976 Kellogg's cards. But I don't expect to do a lot there for quite awhile.
The '81 Kellogg's set has always been the black sheep of Kellogg's sets for me. My brother and I, who had been religiously tracking Kellogg's cards on the back of Frosted Flakes and Raisin Bran since 1977, called it quits in 1981. We were too old, and the cards weren't included in boxes of cereal anymore (they were only available as complete sets through the mail).
I don't even think I saw what the 1981 set looked like for years, and when I did ... well, that's a lot of yellow.
A decade before Fleer thrust a plague upon collectors with its 1991 set, '81 Kellogg's was The Yellow Set. It screamed the color as well because this set was also the largest Kellogg's had created, both in terms of width -- the cards were 2 1/2-by-3 1/2 now, matching the size of a regulation Topps card -- and set size, at a record 66 cards.
Since my return to the hobby, I've reacquainted myself with the Kellogg's sets I missed and had a smattering of '81 cards, all the Dodgers and some random others. But the inspiration to get more was low, because part of the appeal of Kellogg's cards is they're neatly narrow.
Now I have them all and am coming to terms with both the width and the yellow. 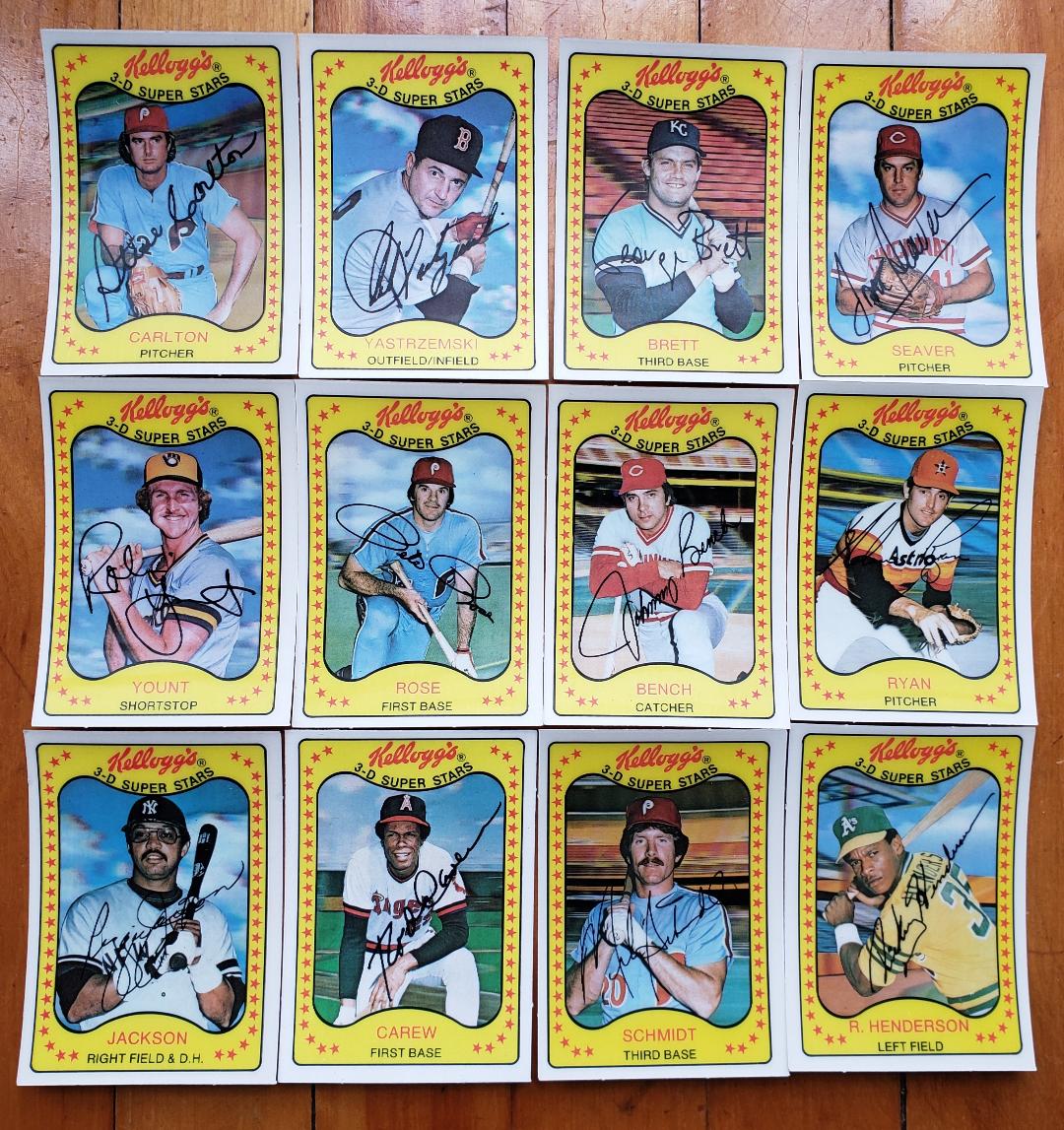 Buying the set all at once is a relief because it means I don't have to search for stars at inflated prices like I've had to do with other Kellogg's sets. I can't imagine seeking each of these out and having to pay a couple dollars or more apiece. Nothing from the '80s should cost that. 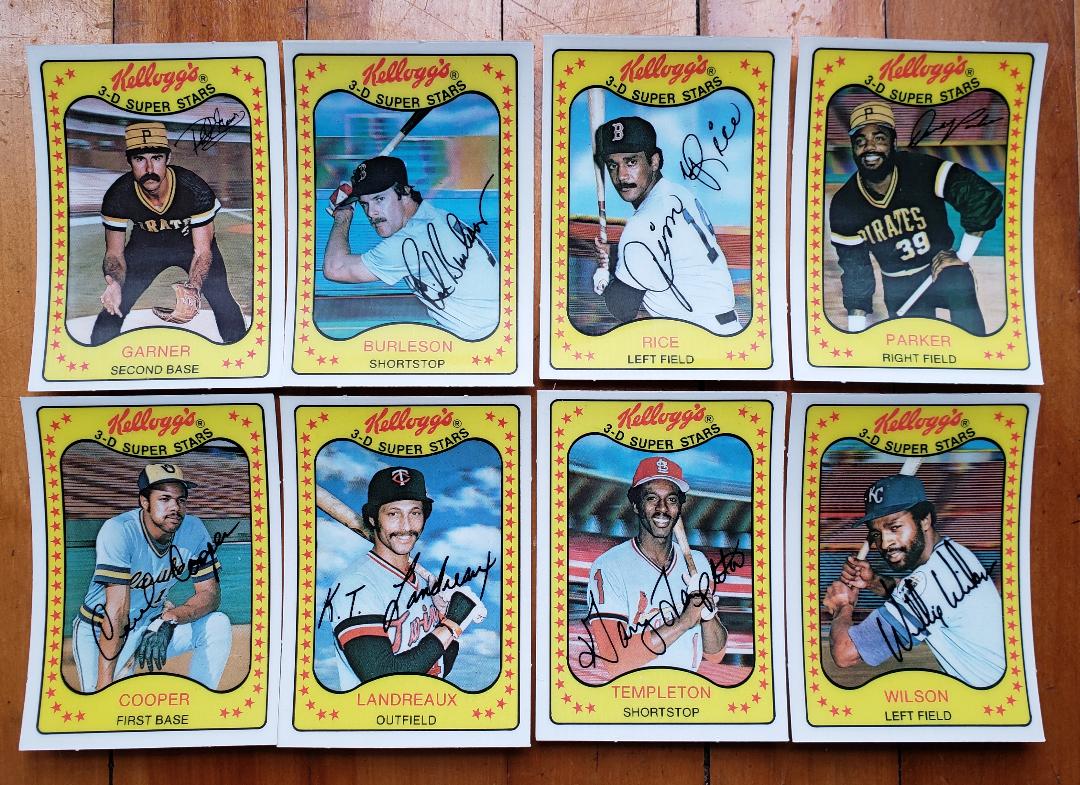 Every time I acquire cards or a set from that key 1974-84 period, I marvel at the new images of players I followed avidly at the time. All of the above were favorites of mine at one time or another. 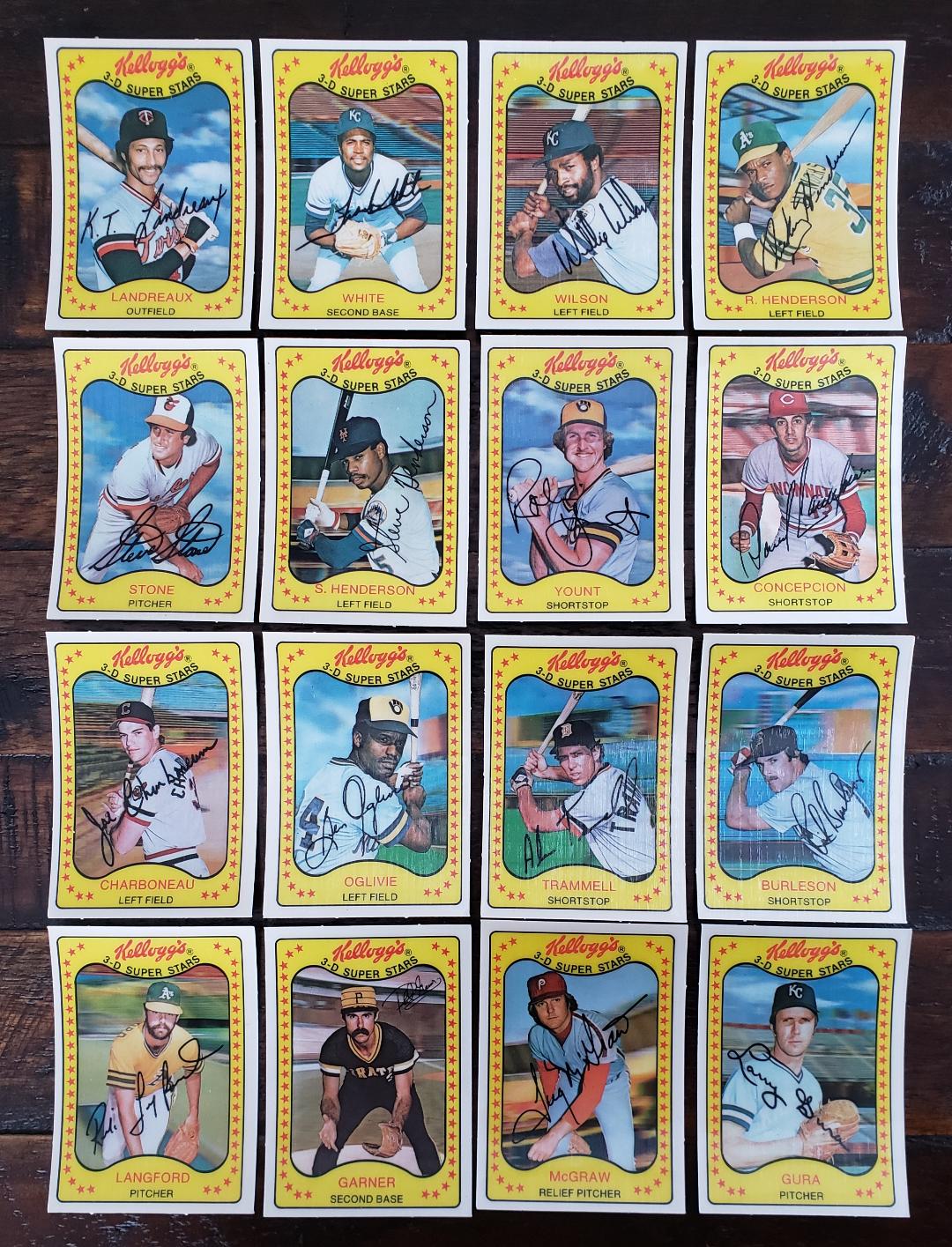 One of my favorite parts of finishing off a Kellogg's set is going through it and finding the players who made their Kellogg's debuts. All of the above were appearing in a Kellogg's set for the first time in 1981.
A few made their debuts due to newsworthy seasons in 1980, particularly Joe Charboneau, Tug McGraw, Willie Wilson, Larry Gura, Steve Stone and Ben Oglivie. It's surprising to see that Robin Yount and Dave Concepcion didn't appear in a Kellogg's set until 1981. 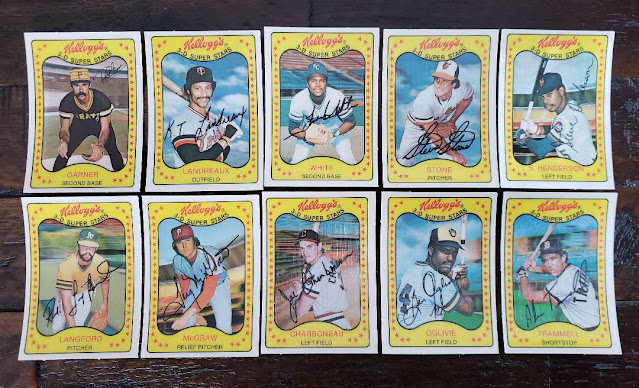 Out of the players in the previous photo, these are the players whose only Kellogg's appearance was in the 1981 set. I was tempted to say Alan Trammell got slighted but that's probably because Kellogg's stopped issuing sets before we got to 1984.
Several days after Jay contacted me, he posted on his own blog, discussing his hobby departure. I was happy to read that he's still holding onto some key cards he collected over the last couple of years.
I hate to see another card blog disappear but at least I have a set here now to remind me of the Card Hemorrhage days.

Brett Alan said…
The fact that ROBIN YOUNT did not make a Kellogg's set for his first 6 years appearing on cards is blowing my mind a bit. He had several Hostess cards in that period. I know Hostess had larger checklists, but still!
November 28, 2022 at 7:54 PM

RunForeKelloggs said…
Congrats on that addition to your collection. I like that the card shows the uniforms and hats so well.
November 28, 2022 at 7:57 PM

bryan was here said…
Love all Kelloggs sets, but this one has significance because I got the Ken Landreaux card at the very first card show I went to in the summer of '81. I remember them selling the Joe Charboneau for $10 back then.

Nick said…
I got a similar email from Jay recently & was able to swing a deal for a few complete and near-complete sets as well - including a couple Fritsch oddball sets I've been trying to track down for eons. It's always sad to see someone leave the hobby, but I'm glad he was willing to get some of these cards to good homes.

I've always liked '81 Kellogg's because of how nice they look in a binder - and although I can't say for certain, the '81 Rickey Henderson might well be my absolute favorite Kellogg's card. The abundance of yellow is incredible.
November 28, 2022 at 11:37 PM

BaseSetCalling said…
Looks like they were very careful printing the signature in this one.
December 1, 2022 at 8:09 PM

Fuji said…
Congratulations on landing this set... and filling in the 1976 to 1982 run of Kellogg's. I really love the bright yellow used in this design... and that's one of my favorite Rickey cards.

Sad that Jay decided to move on from his blog and the hobby. Crossing my fingers that he'll return at some point, because I was always hoping to meet up with him at a card show since he's in the Bay Area.
December 3, 2022 at 9:28 AM