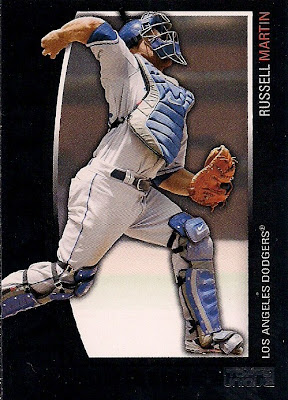 Greetings on Black Friday.
For the first time ever, I may or may not have taken advantage of an online Black Friday card sale. I also may or may not have purchased a black card as part of a Black Friday card sale. I'm writing this in advance so this is all speculation. I have big plans. They often don't come to pass.
But with that particular breakthrough on my part -- if it actually did happen -- I thought I'd do a quick Black Friday-themed post and show off what I consider some of the best efforts to present black on cards.
Black cards are almost always appealing to me. It's difficult to see how you can go wrong. But there have been examples of ho-hum black cardboard (see: most Bowman efforts).
I've pulled some of the black cards that I like the best from my collection (they're all Dodgers, sorry) and arranged them into tiers, third-string, second-string and first-string. I could have added a fourth-string, but there's company in the house and that would be rude.
So let's have a look.
THIRD STRING 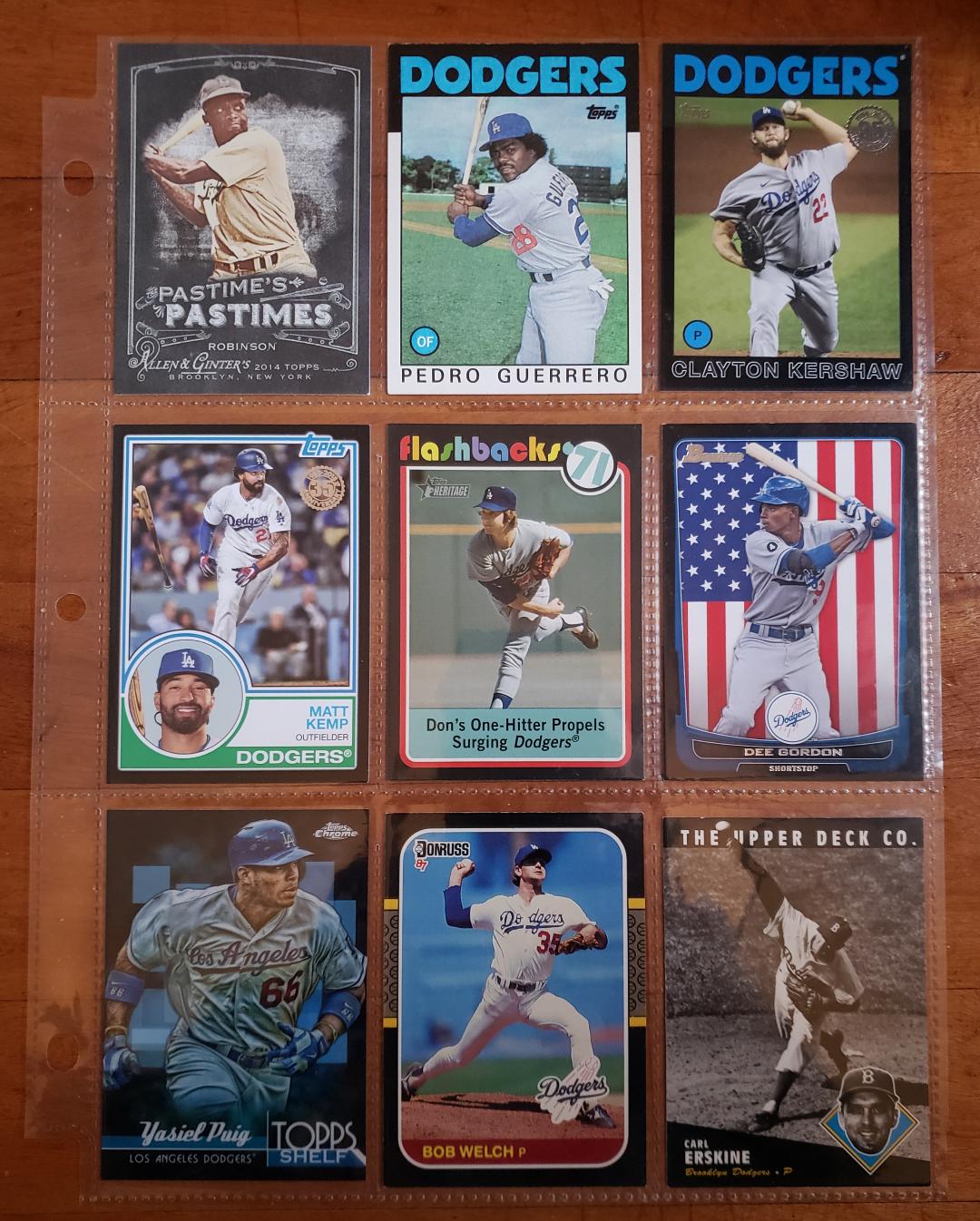 Gonna breeze through these relatively  quickly because no time.
Top row: The A&G Massive Insert Set from 2014 was one of its best, thanks to the black background. ... The '86 Topps and '86-themed insert with the black border variation are side-by-side to show how fascinated I was with the top black border in 1986 (nothing I had ever collected before) and Topps satisfying OCD collectors in 2021 by coloring in all the empty white space with its variation.
Middle row: Just because you put a black border around a card doesn't make it cool, but when you do it with a cool design like '83 Topps then it's cool. ... The Sutton insert shows that 2020 Heritage did some bad-ass things with some of the inserts. I may or may not have just picked one up! ... Bowman usually falls on its face with its black border sets (it's the rounded corners I think), but put an American flag in the back and I'm sold.
Bottom row: Love the Chrome Top-Shelf inserts from whenever that was. ... I'm throwing a bone to the '87 fans with the Donruss set, it's too famous not to include, although rounded corners again. ...  The '94 Heroes set is more than floating heads. It's floating heads with black edges!
SECOND STRING 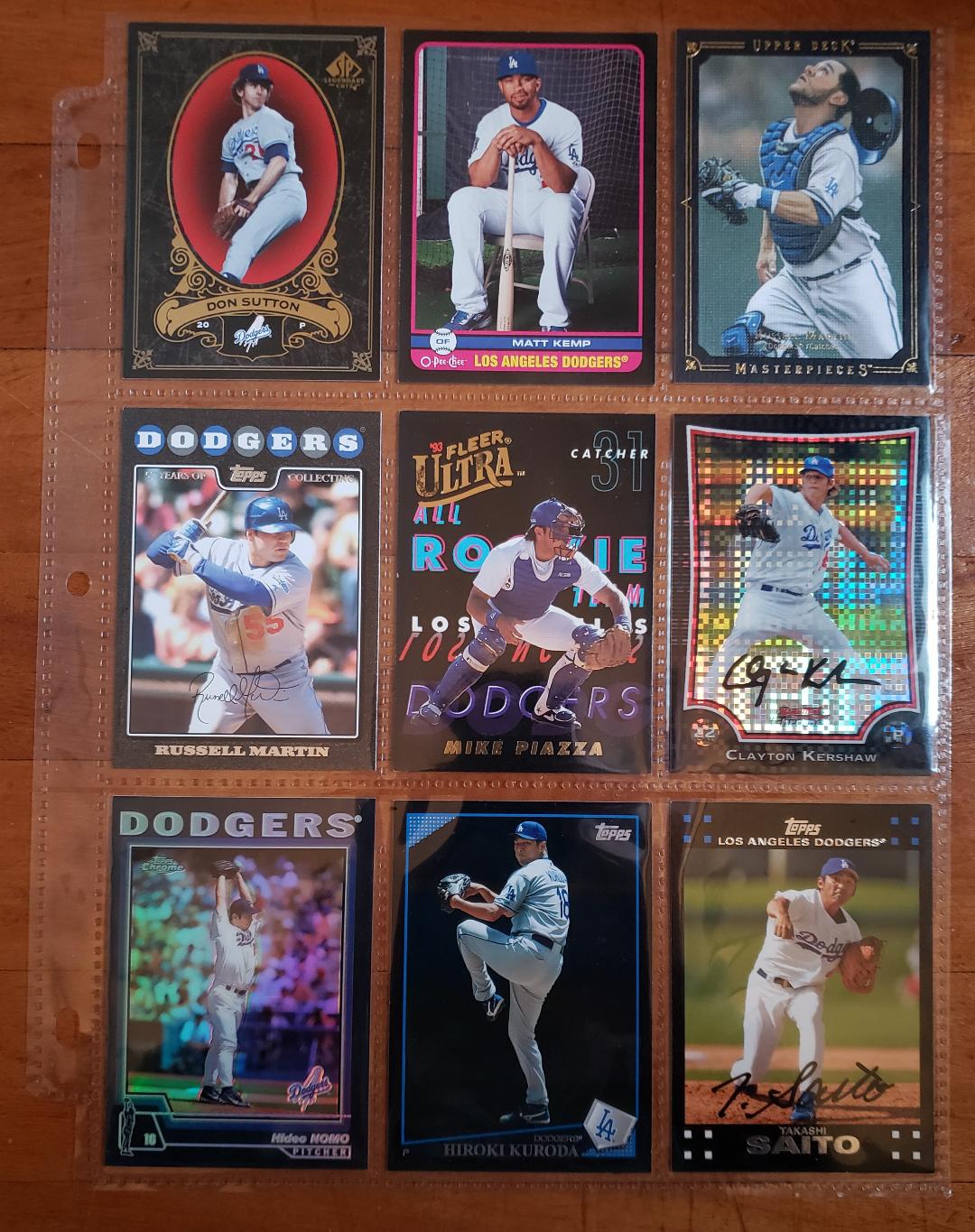 Top row: There's a reason why I like that SP Legendary Cuts set enough to want to collect the whole thing, which has never been a thought in my head for anything else Legendary Cuts. ... I wanted to do the same thing with the black-border OPC parallels from 2009 but gave up. ... The 2008 Masterpieces black frames are fancy.
Middle row: The black parallels in Topps flagship are always difficult to get but vary greatly in look. The 2008 ones are among my favorites. ... Kind of cheating putting a one-off insert from '93 Ultra here but LOOK AT IT. ... Bowman black sets are boring until you chrome it up add sparkles and get a nice fat fake sig like Kershaw's.
Bottom row: Only 2005 Chrome black parallels beat 2004 Chrome black parallels. ... The 2009 Walmart black parallels are the best view of what it would be like to pitch with no lights at midnight. ... The 2007 Topps set was just as bold as the '71 set, but weirder.
FIRST STRING 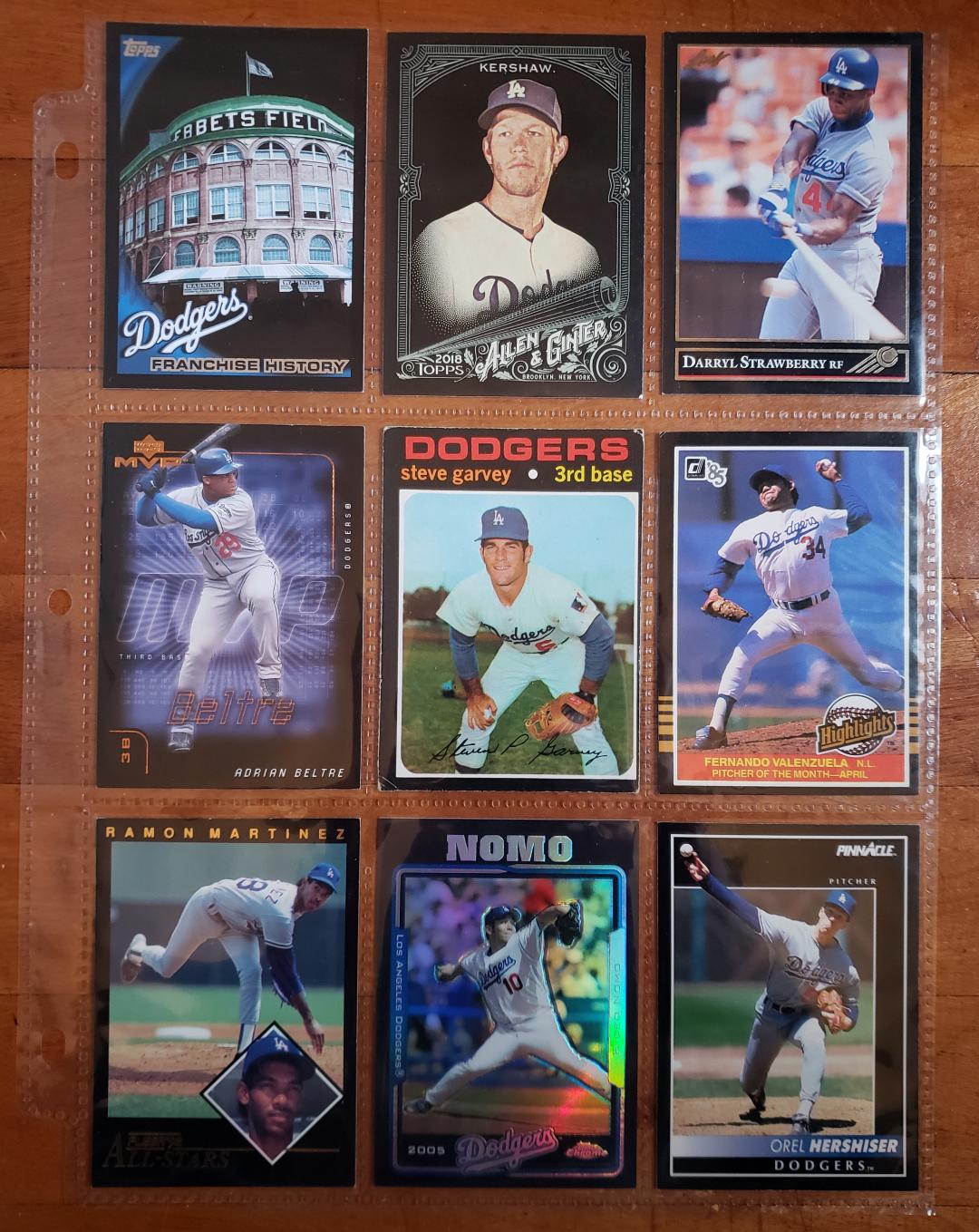 Top row: The 2010 Walmart blacks are slightly less appealing than the 2009's for me, except when you get something like the Ebbets Field card. That's fantastic. ... I really like the look of the Ginter X cards, but after their 2016 debut I haven't done a lot with them. So many parallels, so little time/money. ... The '92 Leaf Black Gold cards are cool, but too much emphasis on "gold' in the title throws me off.
Middle row: I once vowed to collect the 2002 Upper Deck MVP set but haven't. ... 1971 is the OG of bad-ass black cards. This particular one is the O-Pee-Chee version. ... 1985 Donruss was the second black-bordered set I knew after 1971.
Bottom row: The '92 Fleer All-Stars cards don't quite make up for the 1992 pistachio set but they're absolutely '92 Fleer's highlight. ... 2005 Chrome black parallels, there have never been any better. ... The 1992 Pinnacle set completes the trifecta of black-themed sets along with the Leaf and Fleer All-Star cards.
OK, apologies to anything I've missed but I got most of them.
And this was just baseball. For football, there is 1985 Topps and 1962 Topps for sure, after that, I don't pay enough attention. Same goes for hockey or basketball.
Feel free to come up with your own black-card team for whatever sport you like. But time's running out. Black Friday is only one day a year!

Brett Alan said…
I actually did do a Black Friday purchase. Found some deals on Steel City...their shipping costs can be high but even with that I got two blasters and a hanger box for $45. I'll take that.

Old Cards said…
I know I might be stretching the rules, but I consider the 65 Topps St. Louis Cardinals (and KC A's) and some 59 Topps as black bordered cards, especially since you included the partial 86 Topps as a black bordered card. I agree 71 Topps is the best and that conclusion is reflected in my picks. At the risk of being disqualified, here is my team:

Fuji said…
The first black border sets I think of are 1971 Topps, 1985 Donruss, and 1987 Donruss. But if I'm putting them into tiers... only 1971 would be first string. Thanks for sharing so many other black bordered sets. I'd put the 1992 Leaf Gold parallels and any of those mid 2000's Chrome black parallels up there with the 1971 Topps. I also really, really love the black bordered framed UD Masterpieces set.

I just realized I wrote a black border related post a few years ago. Here are a few other sets I like:

I also wish I owned a card from the 1971 Topps Baseball's Greatest Moments set.

Johnnys Trading Spot said…
I didn't do any Black Friday shopping myself. That Kershaw is really nice.
November 26, 2022 at 9:06 PM

Jon said…
Black borders almost always work well on cards, except, as you already mentioned, when Bowman was doing them.
November 27, 2022 at 8:16 AM