What am I doing? 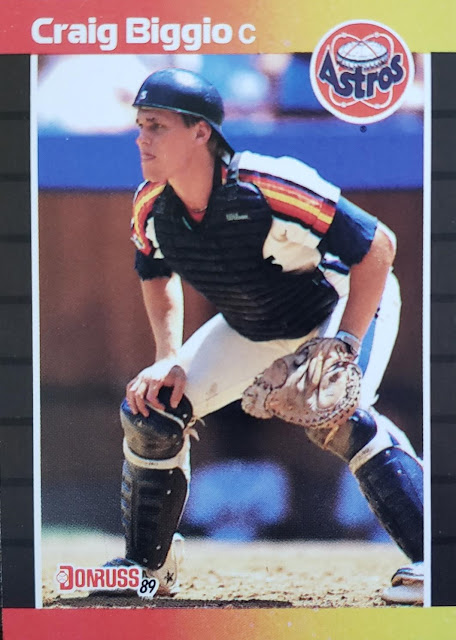 I've mentioned a few times that I'm trying to collect the Fleer flagship sets from the 1980s. I've also mentioned how I've been fighting disinterest in trying to wrap up the last few -- specifically 1985 and 1986. And I haven't even started on 1987.
So it would be foolishness, borderline dumbery to start another set pursuit very similar to those above, from a baseball card brand I have even less interest in than Fleer.
Yet, here I am, accepting 1989 Donruss cards.
What is wrong with me?
I knew this day would come. Although I've always joked about how I like these cards but I'm not collecting them, I've considered '89 Donruss an underrated set in a sea of junk wax mediocrity. Donruss wasn't exactly putting out classics during this time and immediately after '89 it would fall into a three-year funk. But '89 is something different. At least to me.
I like the rainbow treatment at the top and bottom, the color spectrum theme is totally underutilized and also makes me wonder if there is a pattern to this whole set. I also like the black borders and when you contrast black with bright colors, well you've sucked me in.
So when Marc announced that he was looking to get some '89 Donruss out of his house, I hesitated ... and then I signed up. "I don't believe I'm saying this," I think I said before volunteering.
My goal was maybe to get really close to finishing the thing in one shot. I had more than 400 cards from the 660-card set -- 411 to be exact.
I got closer but not close to finishing. I now have 480 of the cards. Marc sent a lot more than 69 cards -- which would've been nice -- but there were a number of doubles. And then there's the whole matter of the back variations, which I was made brutally aware of as I tried to file these new cards into TCDB. I really wish that site didn't care so damn much about that stuff.
So I have a bunch of cards that a couple of years ago I would consider out-and-out dupes that I have to figure what to do with -- I know I'm sure not collecting an extra set of '89 Donruss just because there's a missing period  after "Inc."
But anyway, some of that was a tangent. You want to see the new '89 Donruss -- er, maybe someone does. I'll show what I needed in easy-to-swallow 12-card images: 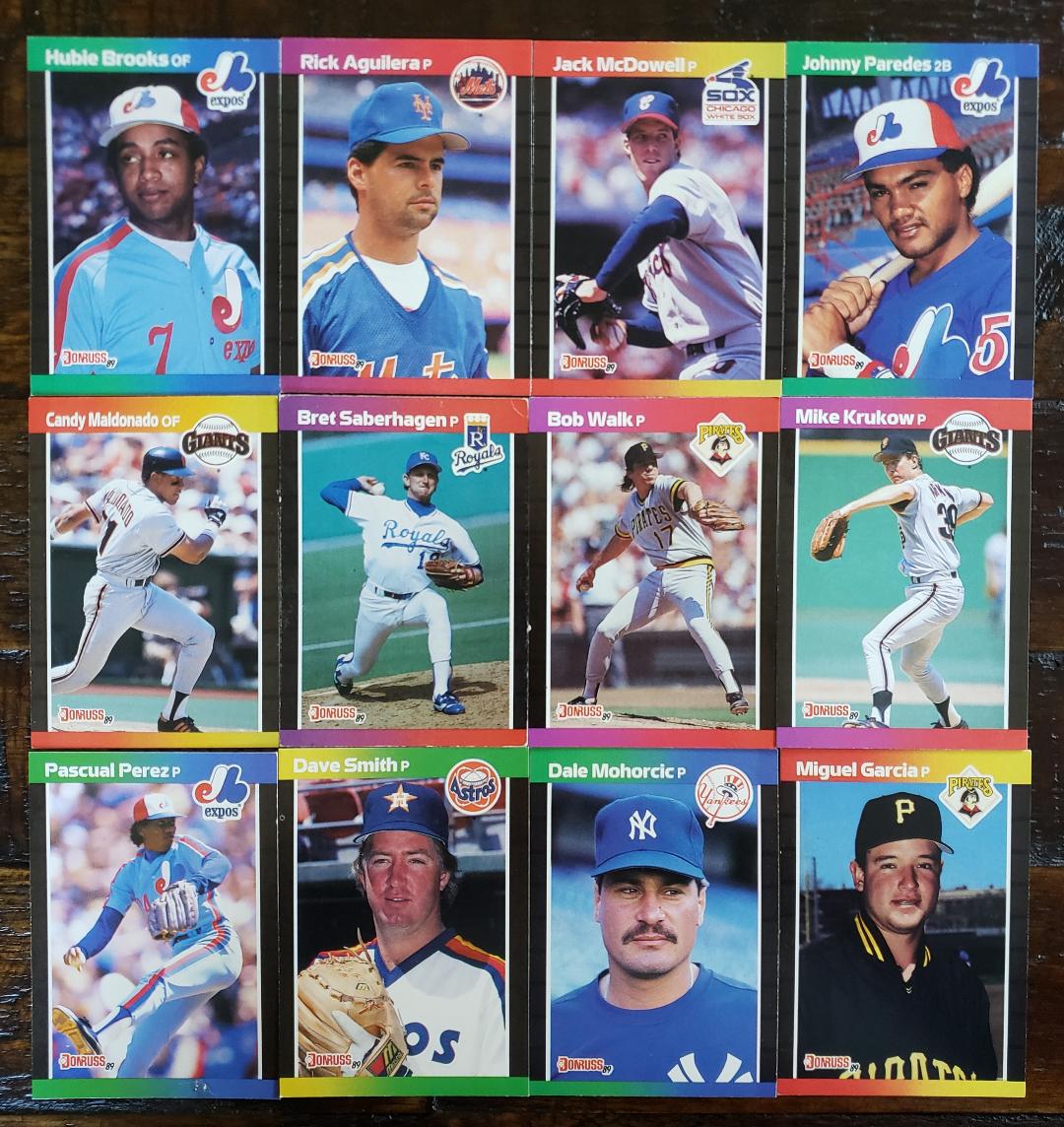 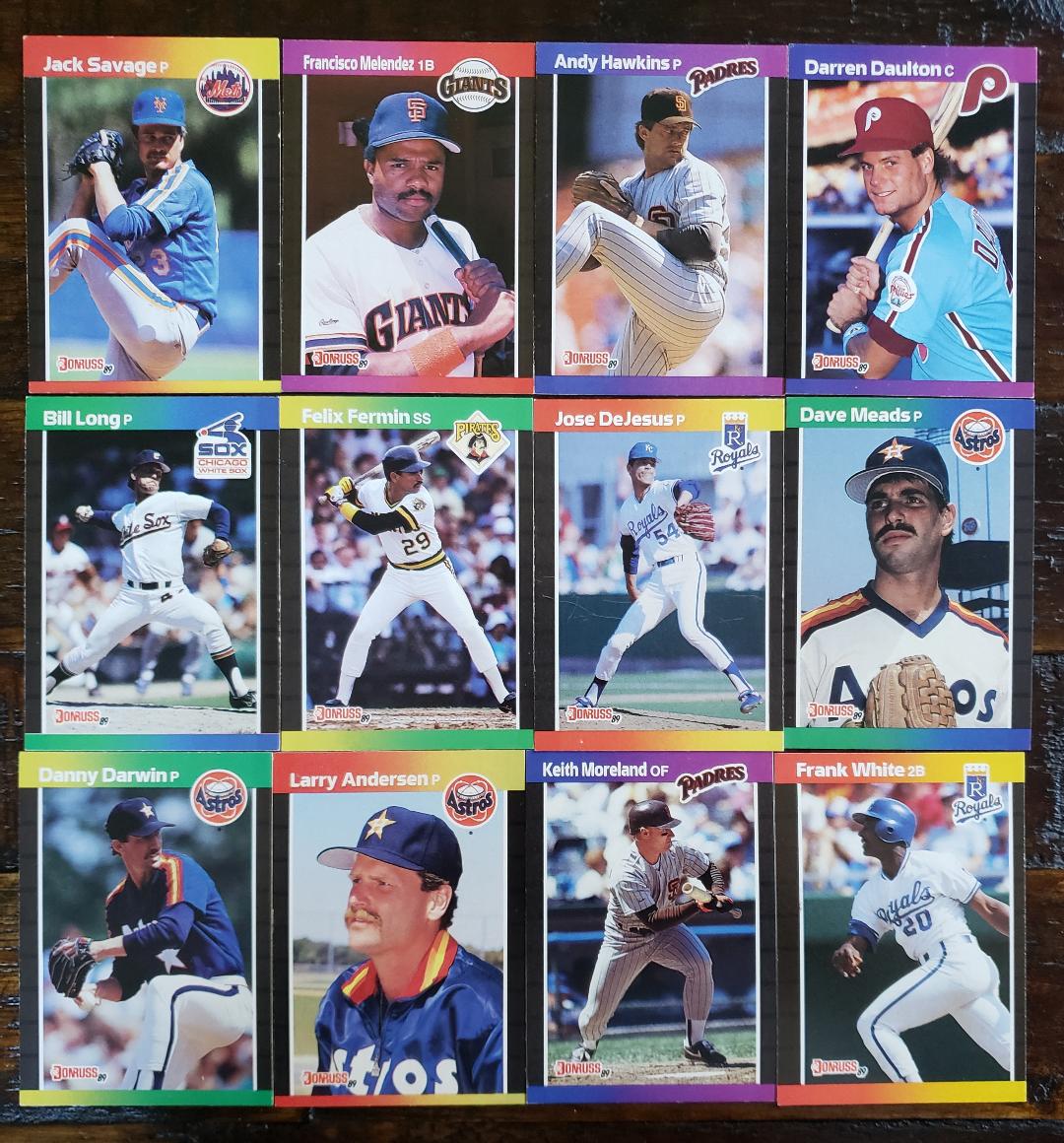 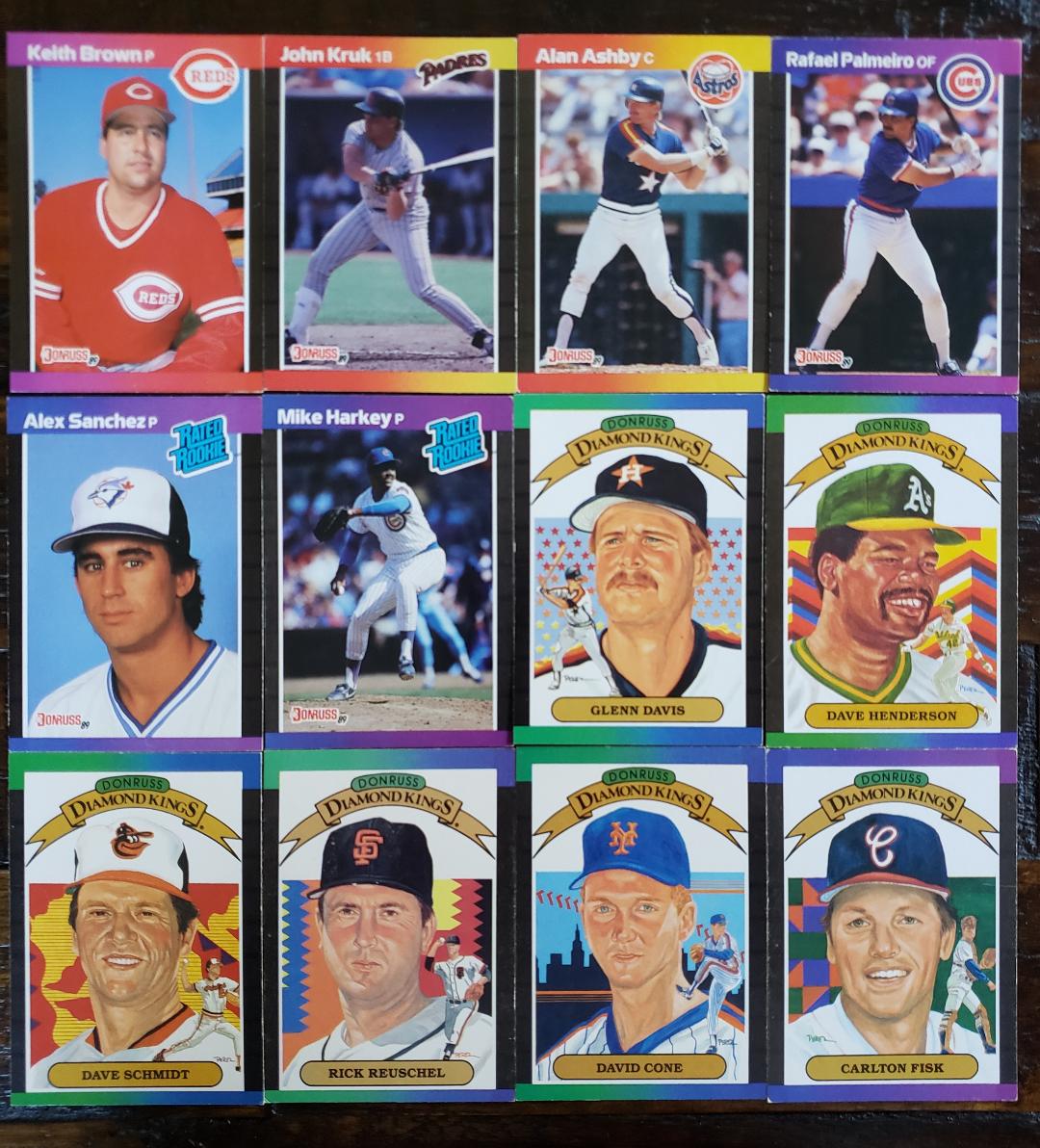 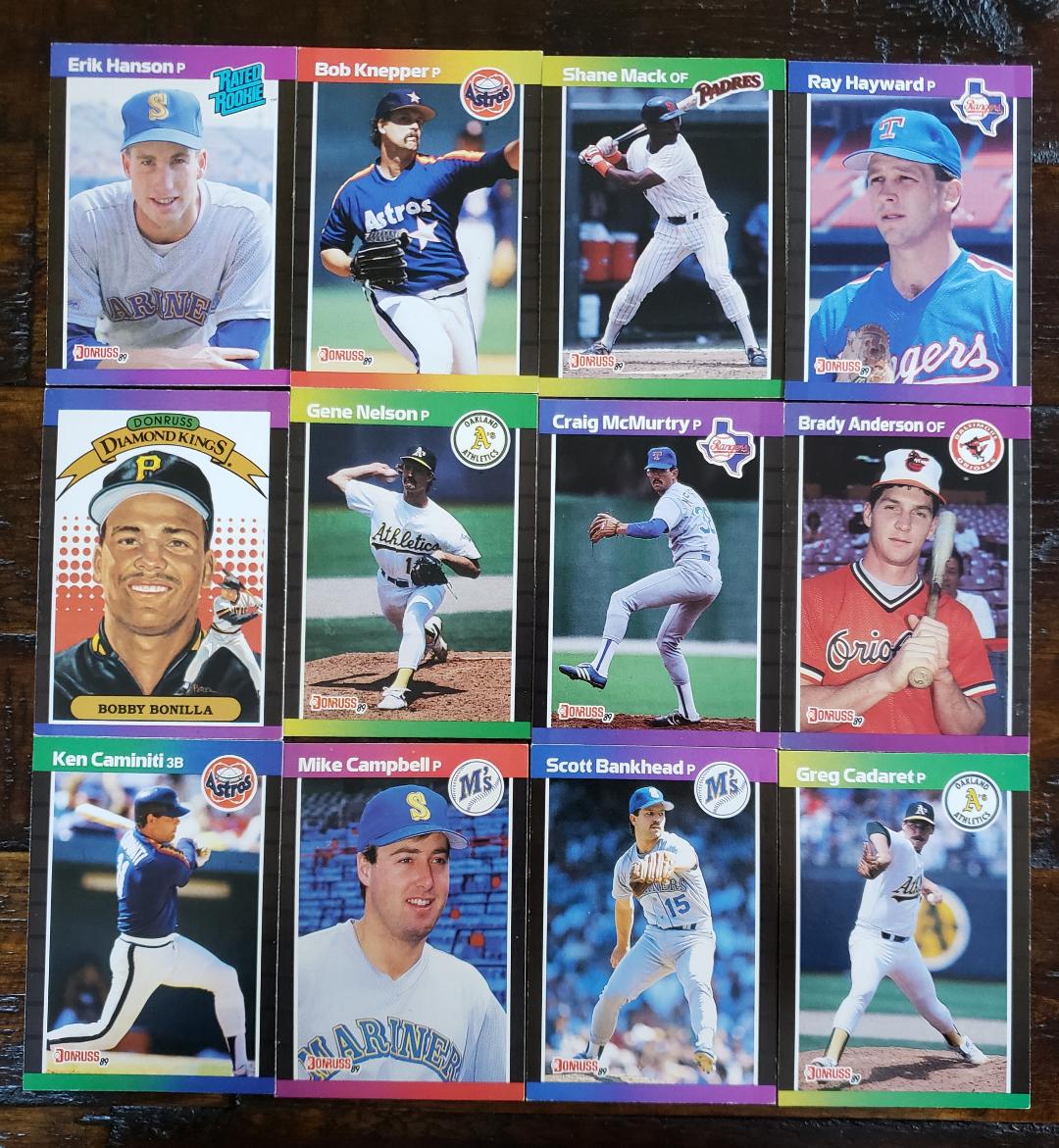 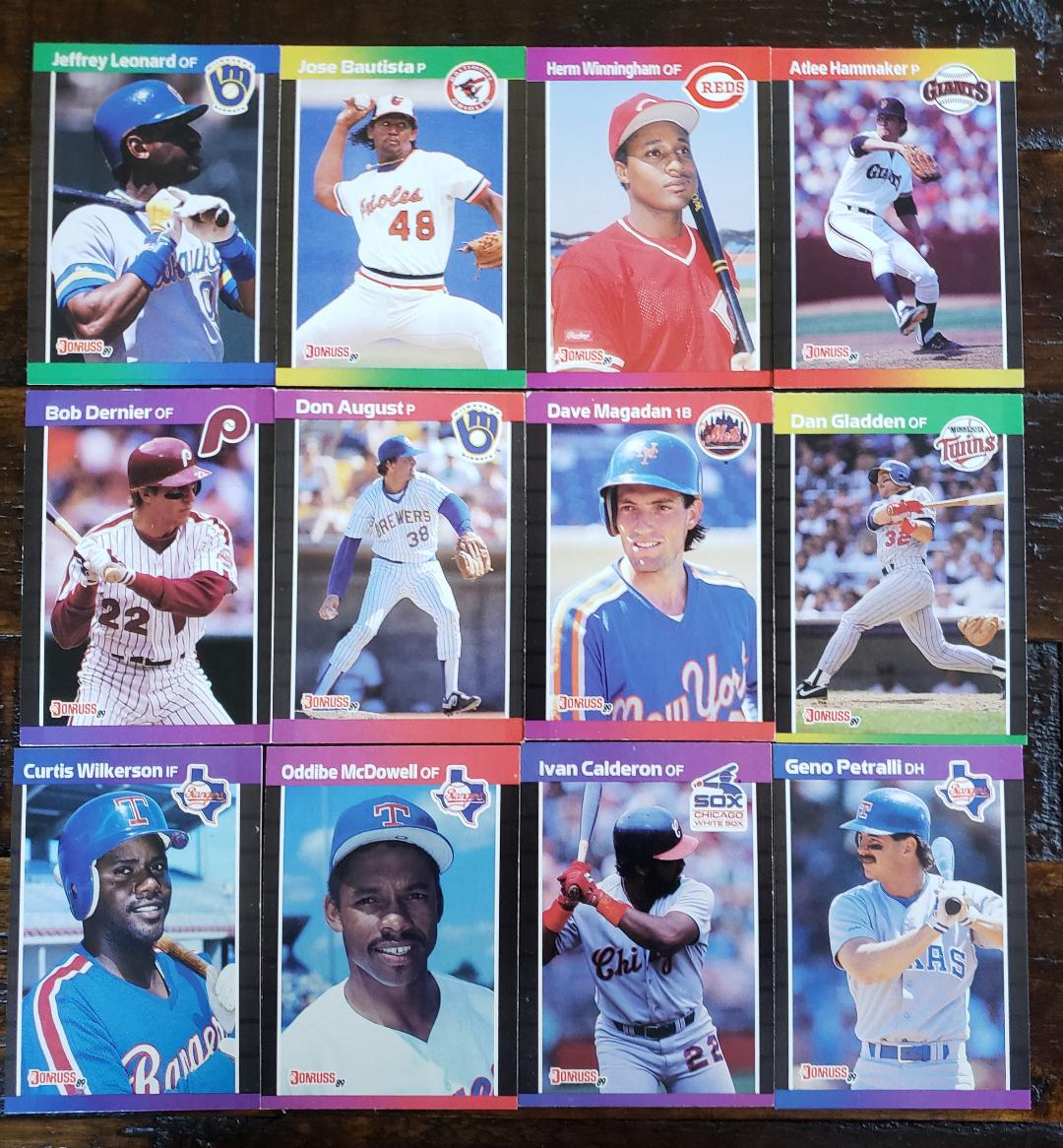 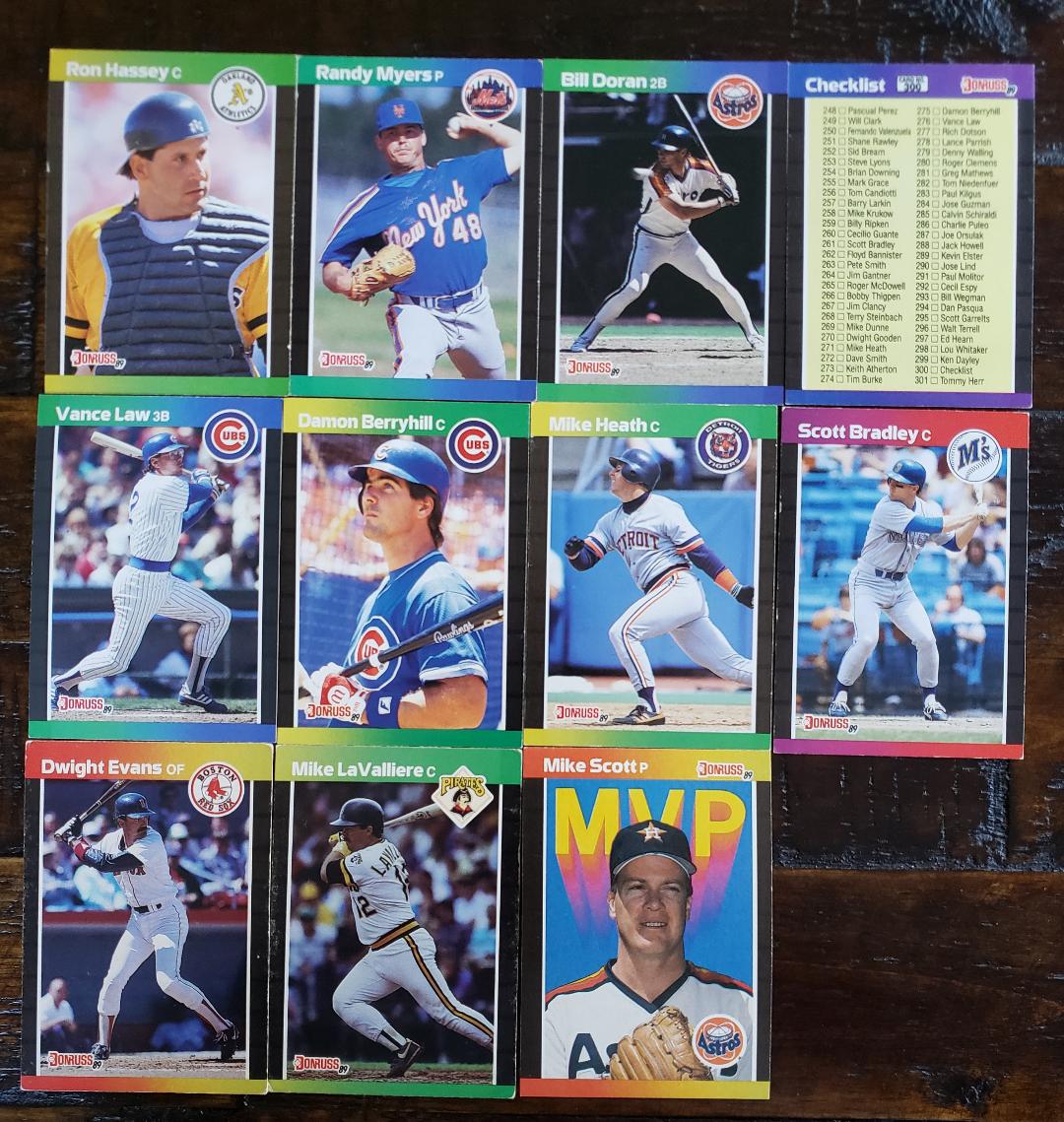 All right, that's slightly more than 69 cards, I don't know how that happened (one of them is from the separate MVP set).
But crooked and somewhat blurry pictures aside, I think that shows why I kinda like this set. 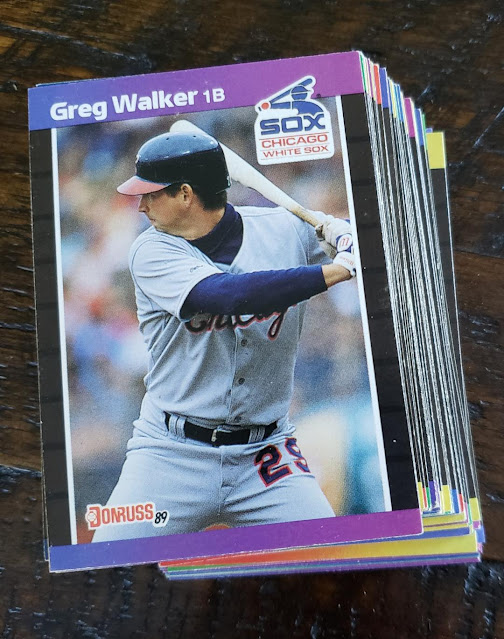 These are the cards that I have already but, gee, I don't have the version where the word "Denotes" doesn't have an end quote! Excitement! Please tell me what to do with these. (TCDB says the master set to '89 Donruss is 2,534 cards! That is officially bonkers). 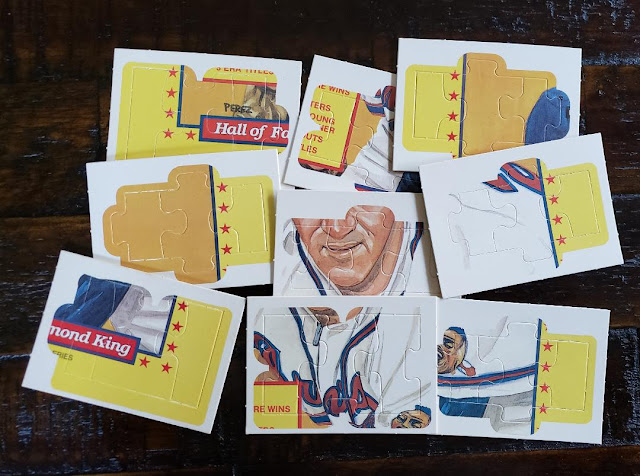 Here are the Warren Spahn puzzle pieces Marc sent. I've got several of these sitting in a box, so it's time to see if I can put Puzzle Spahn together.
I don't have a want list up for '89 Donruss yet but I'll get there. Once it's up, there are two ways this could go. One, someone sees that their prayers have been answered and overdoes it and ships me six palettes (I will ship it right back, I swear!). Or, two, the want list cards sit there wondering whether I've forgotten them, much like 1986 Fleer's want list, and then you read me groaning for five posts about how I should really finish off those few '89 Donruss cards.
Isn't collecting cards from the '80s fun?
Marc also sent me some Dodgers -- I'm sure to take the edge off of all that junky wax.
Here are the ones I needed: And I set aside one because it's special. 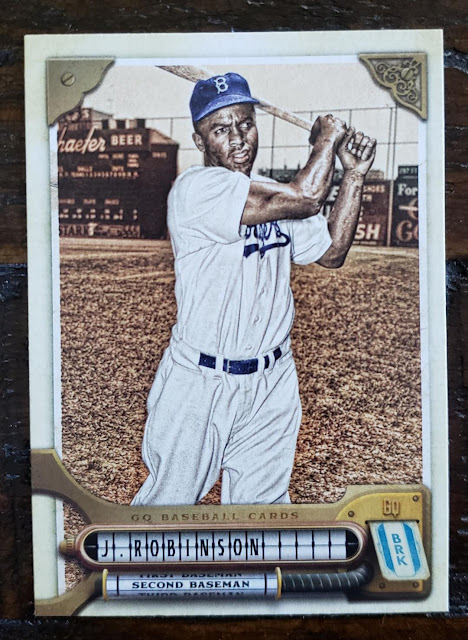 It's one of the SPs from this year's Gypsy Queen set. Speaking of languishing on a want list, GQ SPs are mothers. It's so nice to have this one.
So that's where I am -- basically closer to not being able to explain myself.
This means I need yet another binder and then I got to find shelf space and you know someone is going to ask me if I plan to complete 1988 Donruss, too (no comment).
It's a lot to take on for something like Donruss.
But at least it's easier to complete than 1967 Topps.

Johnnys Trading Spot said…
You are a day late with this post. I put my boxed 89' Donruss set dupes (minus braves, and super stars) in a climate controlled storage unit today, today. I took 8 40 gallon totes/tubs with about half of the cards I have here in GA just today. I have three more tubs loaded to drop off tomorrow. Hopefully that trade tub is on top so I can easily pluck out that box of Donruss, if not know I have all of those cards (including the stars in dupes waiting to be stumbled upon for you.
October 6, 2022 at 7:38 PM

crh614 said…
THe first thing that I came upon TCDB when getting back into collecting last year was the VARs for 89 Donruss. I needed about 100 cards at the time to complete the set, then I realized I needed 2000 cards to complete the master set. I stupidly but a little light, a magnifying glass and started going through them all and my doubles. I finished the base set pretty quickly, but I am am still far away from (and not ACTIVELY pursuing) the Master set. I promised my self I would NOT sort the doubles and input them by VAR... and I havent... so far!
October 6, 2022 at 7:47 PM

Brett Alan said…
I really should figure out which of the junk wax sets I'm closest to completing. I suspect this one is up there. I have started when I get new cards from this set to check for the variations, but I haven't gone to look at the dupes box yet (I knew nothing of these variations when I got the original big box of junk wax which reawakened my collecting.) Perhaps if you get close to finishing I'll be motivated to check for the ones you need and look for the variations while I'm at it. Or maybe not the latter part!
October 6, 2022 at 7:49 PM

Old Cards said…
I have some complete sets from the 80s, but I bought them as complete sets. I admire the patience of you guys who can collect 80s sets by individual cards.
October 6, 2022 at 9:53 PM

Jon said…
I'm not collecting the set, but I did just recently buy a single from the Baseball Card Store. I never thought I'd be buying another single from this set, and yet...
October 7, 2022 at 8:42 AM

Bo said…
There was a certain blogger years ago who said he loved the set and wanted as many copies of each card as he could. I asked him if he was serious and he said he was. I sent him a large flat rate box of '89 Donruss, and said just send me some cards back to cover postage. I wasn't expecting much back but it would have been nice to get some cards in return. A few weeks later I got a large flat rate box back - full of Mardi Gras beads. Not something I wanted or asked for or had any interest in. (The blogger is from New Orleans which might give his identity away). There were also maybe three baseball cards in there. Extremely disappointing, really the only negative experience I've had with a blogger in 13+ years of blog trades.

gregory said…
Is it strange that I'm looking forward to updates on your '89 Donruss set completion? I don't think so. It's a pretty nice set in hindsight (nostalgia-wise, at least), and there are all those classic rookies to be had. Rooting for you, Night Owl!
October 8, 2022 at 10:04 AM

Doc Samson said…
I always liked 1989 Donruss. I really liked 1989 Donruss Best — a factory set that was primarily sold at Kmart. Instead of using multiple color schemes, Donruss best only used green. I believe this worked better. The set also had better photography and cropping, a better back, and more action shots. Same goes for 1990 Donruss Best. Thanks again, Mr. Owl.
October 11, 2022 at 4:42 PM