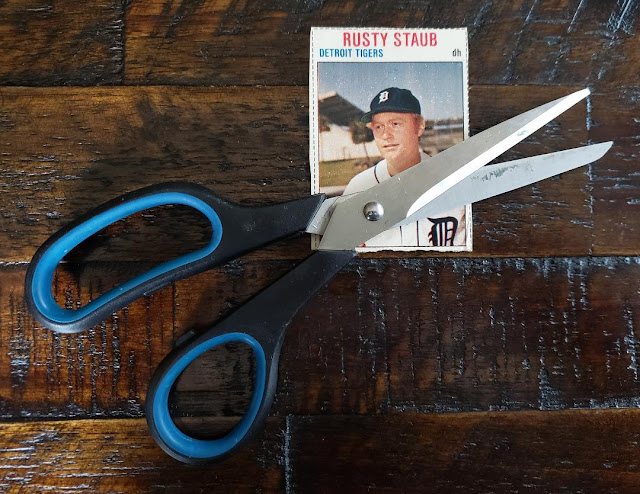 I found my 2022 Topps Mookie Betts card today. I opened up the binder to file the Series 2 flagship cards that I received recently and -- hello -- there was the Betts card staring back at me. I apparently misfiled it out of order and that's why I didn't pull it for yesterday's post.
So, with that disaster out of the way, I can move on to happier things, such as the nice stack of '70s Hostess that Bob of the best bubble sent me!
This is the kind of boost I need as I've stalled a little bit on Hostess additions. 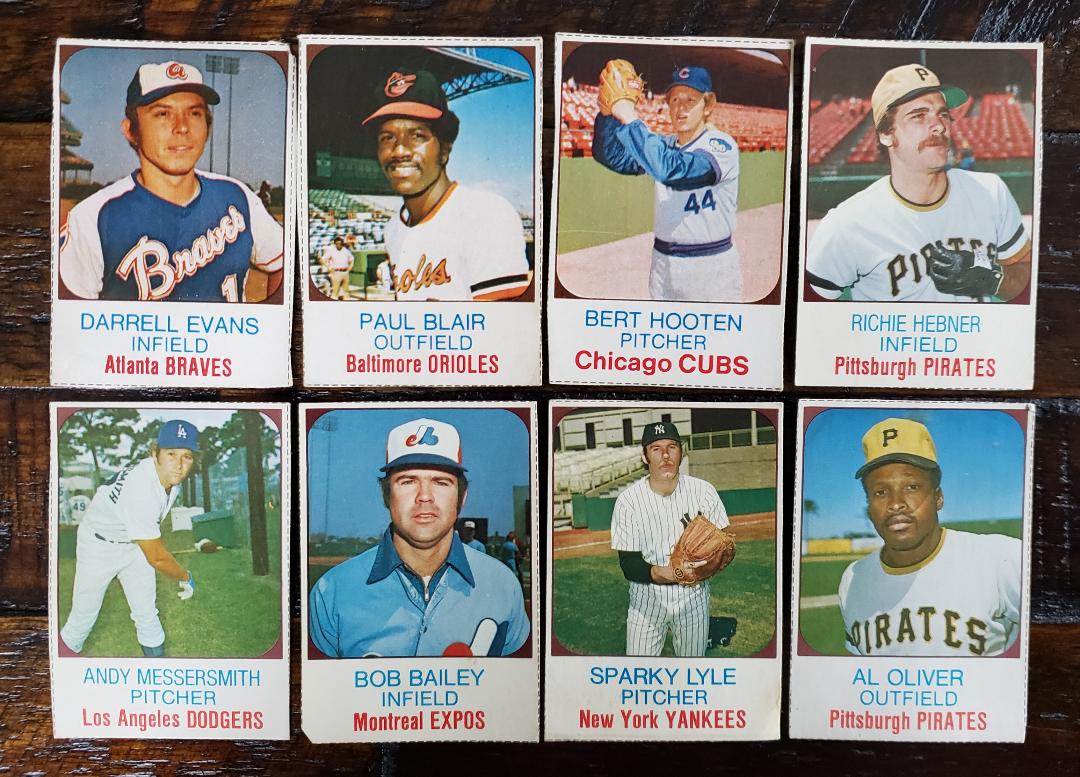 That's a host (ha!) of Hostess additions from the 1975 set. Love it. I know I've said I'd like to chase the '77 Hostess set after finishing off the '76 set last year, but the '75 set has such a classic look and I'm even happier when I view it. So it looks like I'll be picking up both at the same time as I can! 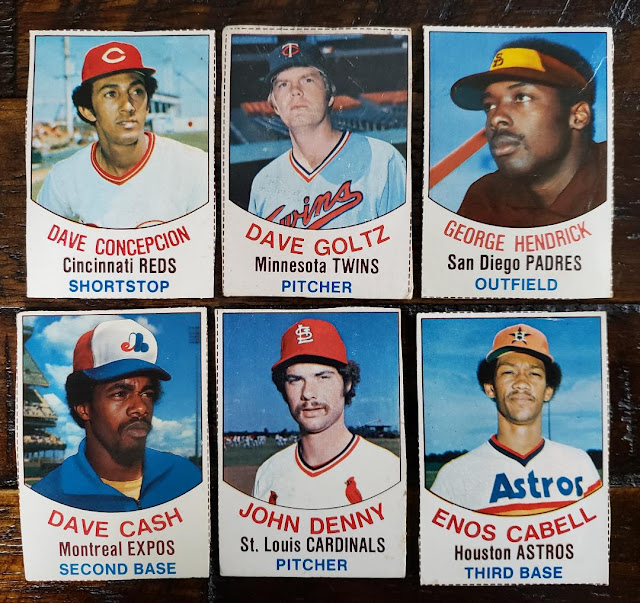 Here are some of the '77s that Bob sent, all needs. That George Hendrick is a well-known Hostess classic with one of the few examples of the airbrushed visor. 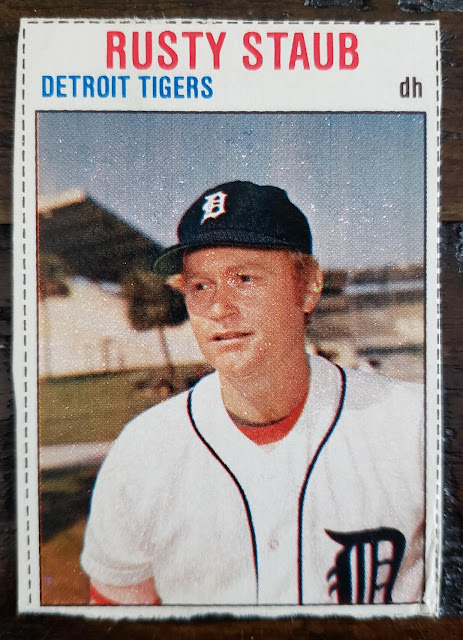 I'll get back to the '77s in a sec but I wanted to show the lone 1979 card from the stack. This photo looks like it was taken by my grandmother with all the space up top.
So, back to the '77s: 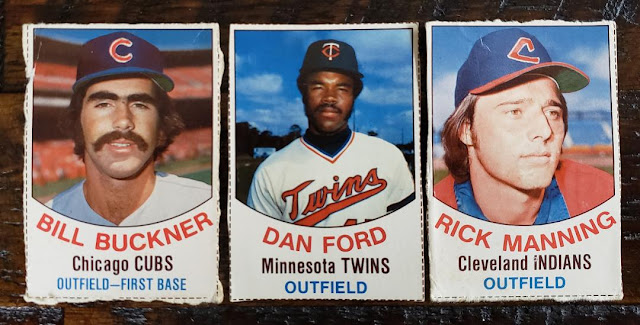 These three that Bob sent, I have a copy of already. But I've left them on my want list because the versions I own are a bit worn down.
The super-fun aspect of Hostess cards is there is always potential for upgrading, so let's see if I can upgrade! 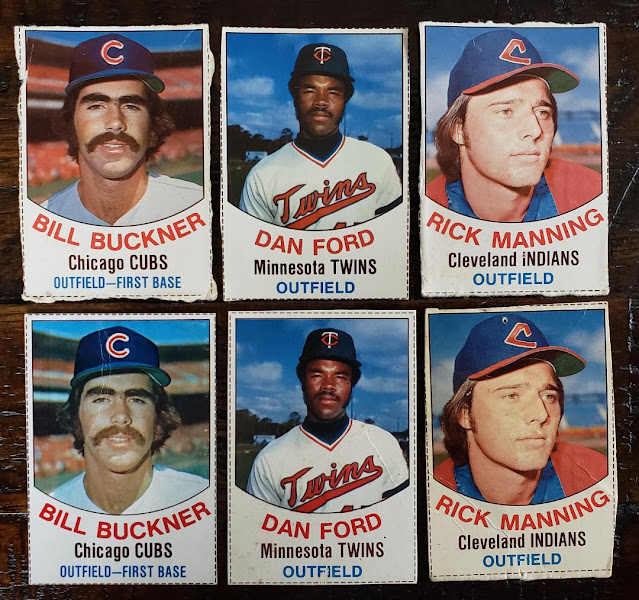 The ones that were already in my collection are at the bottom and the ones from Bob at the top. All of the ones that Bob sent are definite upgrades. All three on the bottom feature creases and in Manning's case, a pinhole. There's nothing I can do about those condition issues.
However, there IS something I can do with the upgrade material Bob sent! All I need is to break out the scissors!
Hostess is about the only set I can think of where scissors can actually IMPROVE the cards. Normally taking scissors to a card is an act of destruction -- a sign of a psycho even -- but not with Hostess! 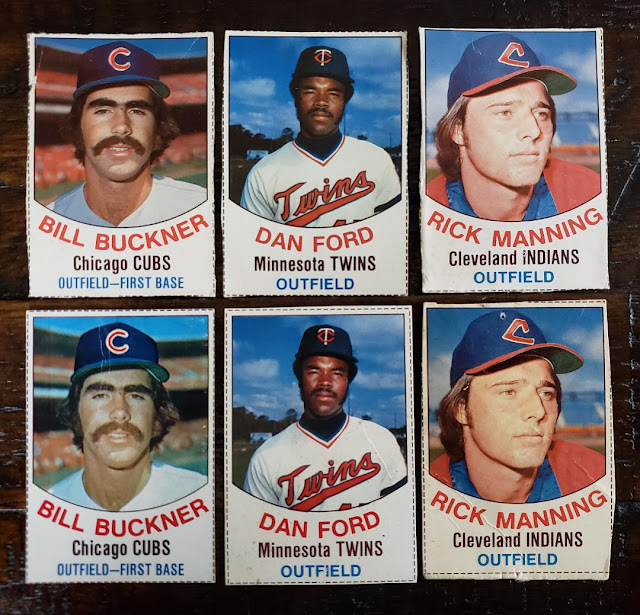 There is a comparison with the cards on top freshly trimmed. I didn't touch the Dan Ford card, nothing to do there. But the Buckner and Manning look a lot less ragged and are ready to replace the versions below.
Hostess cards will never be in perfect shape, with wayward edges and inevitable staining. But I like the DIY aspect of them as I refine them to my taste. It's a lot better than throwing money at upgrades all the time.

jacobmrley said…
If you need a landing spot for those downgraded Hostess singles, well, I know a guy who collects oddball food issues and doesn't care much about condition...
September 28, 2022 at 8:06 PM

night owl said…
They'll be going straight to your stack that has been waiting for days and days and days for me to have time to venture 2 miles to the post office.
September 28, 2022 at 10:02 PM

Jon said…
I've only trimmed a few Hostesses, but have done my share of Post cards. It's amazing what just a pair of scissors can do to them. It's also quite satisfying to be able to recut, in the case of Post cards, something that is now pushing 60 years old; and what's more, it's completely acceptable to do so!
September 29, 2022 at 8:38 AM

Bo said…
So much to love in these photos. The guy in the background on Blair's card. Hebner pulling on his jersey? Sparky at Shea. Looks like a large boat behind Concepcion (I know it's not). Hendrick's visor. Whatever is behind Denny. (Half the team? Some kind of equipment? I can't make it out.)

But the winner by far is Messersmith. You've got the old-school equipment storage. The players in the background. #49 Charlie Hough and probably #25 Tommy John. Best yet, he's following through with a batting glove on his pitching hand!
September 29, 2022 at 10:26 AM

Fuji said…
Pretty sure that's the first time I've seen an airbrushed visor. Did a double take when I saw that Hendrick... then got confirmation from you. At first glance, it looked like a mispainted helmet.
October 1, 2022 at 8:08 AM