Coke and a smile 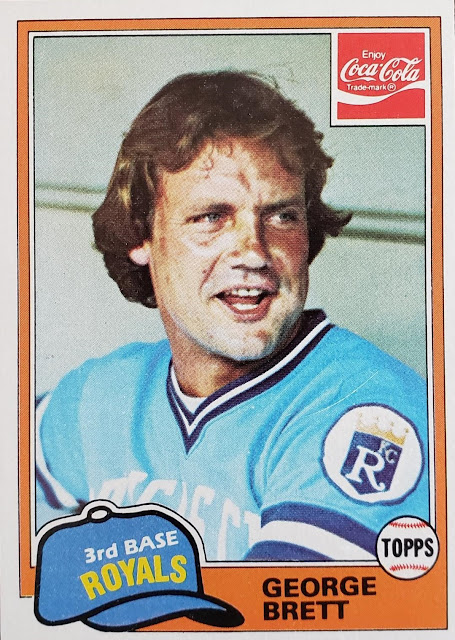 The last two cards that I needed to complete the 1981 Coke sets (this will be disputed by a certain noted collector) arrived in the mail today.
Although I've always loved those Coke issues from around this time, I didn't go all-in on them until this year, when other oddball issues from my favorite time period increased in price and availability. In the spring, I did a lot of damage to the Coke sets, but eased off over the following months.
I resumed the chase a few weeks ago. Finally, about a week ago, the last two player cards showed up in the mail. 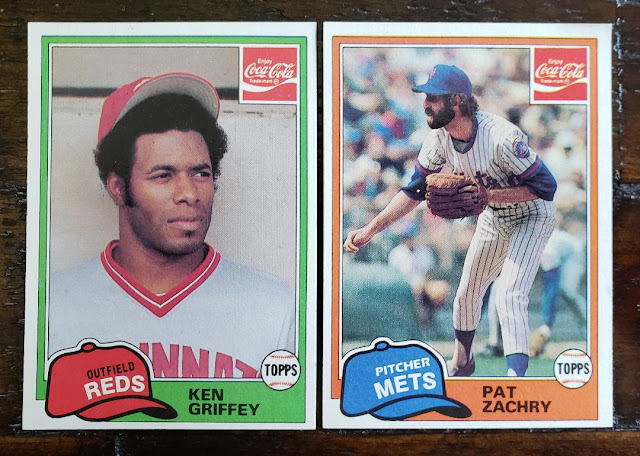 This is the charm of the sets. Although there is a Nolan Ryan and Pete Rose and George Brett, they aren't necessarily more difficult to obtain than the other cards. That's because mojo hunters -- who only collect stars and rookies -- aren't interested in these much, and isn't it wonderful?
It's so nice that something from my childhood hasn't been run roughshod by "investors" and the like.
Still, although it wasn't the most challenging of sets to finish, it felt like an accomplishment when I landed Griffey and Zachry. I displayed all the cards to show off on Twitter -- because that's what you do on there before you do it here. 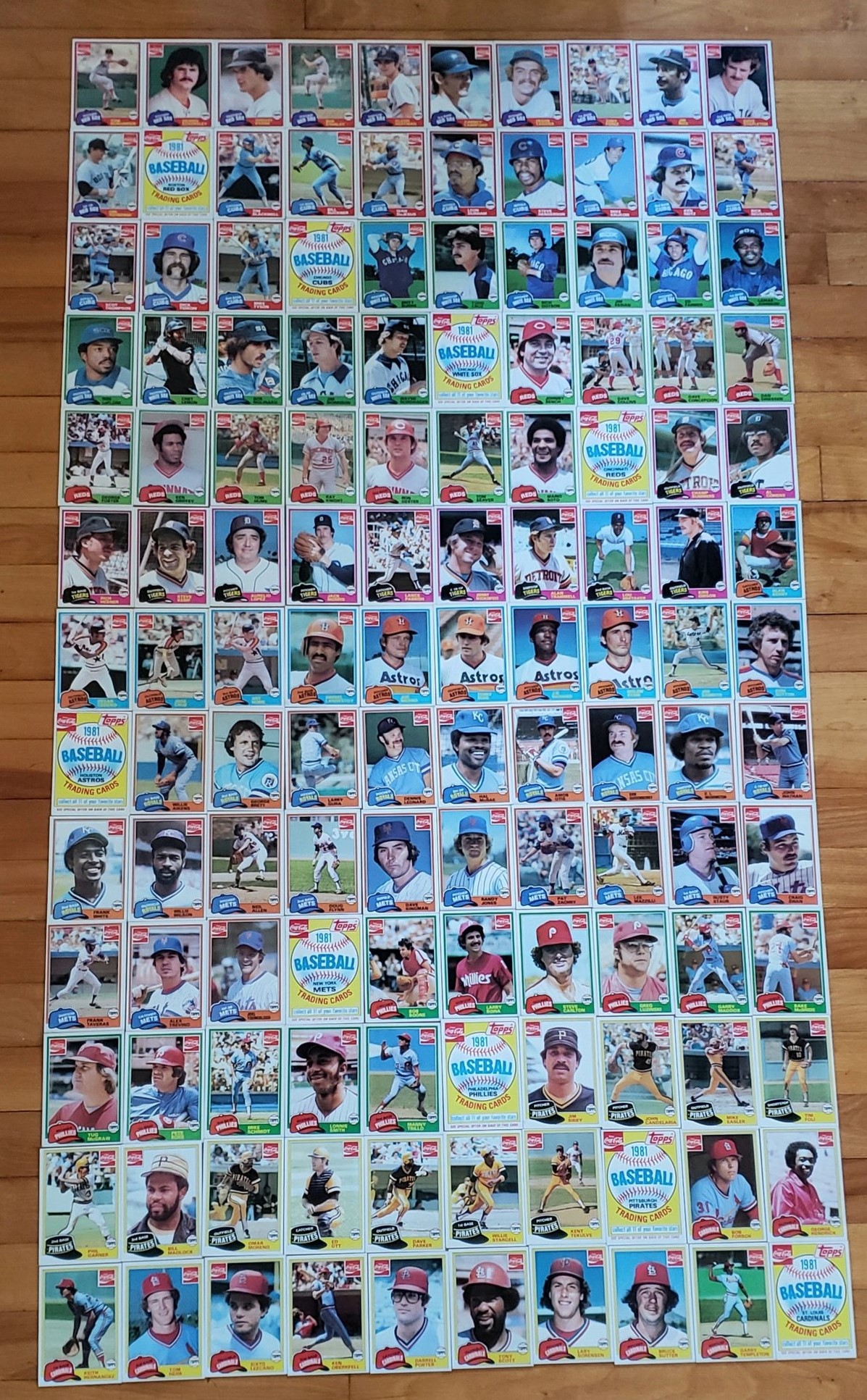 That's just glorious. So many feelings from back in the day. Every time I think about how painful my teenage years could be, one look at something like this makes me realize, maybe things weren't so bad.
But as proud as I was of this, I knew it wasn't quite finished. I mentioned that I was missing two of the ad cards, one of them came with each team.
A Twitter follower, Jason (@jschris1), deduced exactly which two I needed -- the Royals and Tigers -- and had happened to be starting a card organizing project with his collection, and those Coke cards were sitting right on top as he began. That's destiny, man. 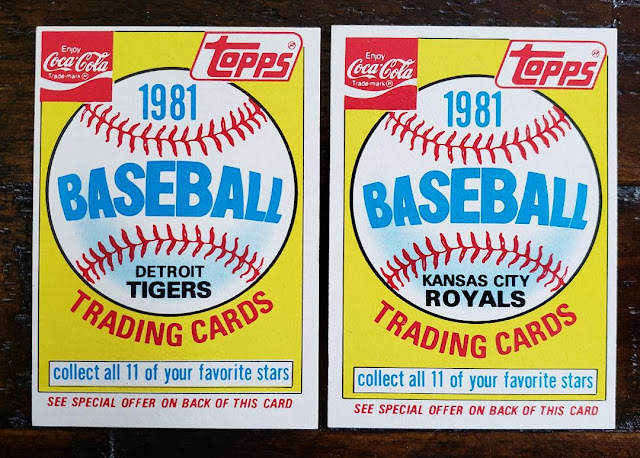 That's what arrived today to finish off the final two empty spots in my binder.
Still, some folks don't think it's finished. One Keith Olbermann, upon seeing my triumphant display, had to point out the Dave Kingman Cubs variation and the Yankees team cards that were pulled due to sponsorship issues. Both are quite rare.
I explained that I don't concern myself with impossible tasks like that. It's fine for him, he's got access to stuff I never will and has a collection I'll never attain, but there's a certain peace of mind that comes in collecting when you just let specific items go and call it complete. Decades and decades of Topps short-print hijinks has trained me for this.
So I will proudly display this as complete and insist that it is and do it with a smile on my face.
"Coke and a smile" was the Coca-Cola slogan when this set came out and it's quite appropriate. I feel like the kid.

jacobmrley said…
Tell ol' Keithy boy that if he wants to donate those to your cause, you'd be glad to accept them. Otherwise he can keep his mustache in his own affairs (does he still have a mustache? I haven't looked in a while).
September 30, 2022 at 7:27 PM

Jimetal7212 said…
Congrats. I finally completed the Coke sets earlier this year myself. The final piece of the puzzle were the Tigers. For whatever reason, and I'm sure there is one, those were just a pain to final decently priced. And yeah, Keith has the $, he can chase all those others down.
September 30, 2022 at 7:33 PM

Nick said…
Good lord that's a glorious tile of Coke cards! I'd consider those sets complete, no matter what Mr. Olbermann says. Didn't even know there was a Kingman one until I saw his comment on your Twitter post.
September 30, 2022 at 8:26 PM

Johnnys Trading Spot said…
Olbermann can kiss, (fill in the black). Congrats on the COMPLETED set! The commercial, I loved it back then it was great!
September 30, 2022 at 11:57 PM

Doc Samson said…
Olbermann is being a troll. He feels like like he has to throw his two cents on anything regarding baseball. He probably has issues with The Beatles’ Revolver album. Forget about him, Mr. Owl. Well done from someone who actually remembers this set.
October 1, 2022 at 10:44 AM

kcjays said…
Congratulations! What a great feeling when you get that last card, or two, to complete a set.
I have the Royals cards but seeing the display makes me want them all. I might have to start looking for a few more, at least the Cardinal team set.

Bo said…
Congratulations! I love the idea of the title of your post. Maybe someday I'll do something similar.
October 1, 2022 at 7:52 PM

Swing And A Pop-up said…
That is awesome...congratulations! I too, ignore cards that are next to impossible to get. I also agree with putting the Red Sox cards first. Yes, I know it's because they were in alphabetical order, but I can fantasize that it was because they were the most important, can't I?
October 1, 2022 at 9:20 PM

Fuji said…
You know you're a card collector of note when Olbermann follows and comments on your posts. Congratulations Night Owl! This is one heck of a collection. Just curious... do these get stuffed into a box... or are they going in 9-pocket pages for easy viewing?
October 2, 2022 at 2:23 PM

Nick Vossbrink said…
Congrats. I'm going for a type collection here rather than a complete set but it's nice to see the different teams all in the binder.
October 2, 2022 at 11:17 PM