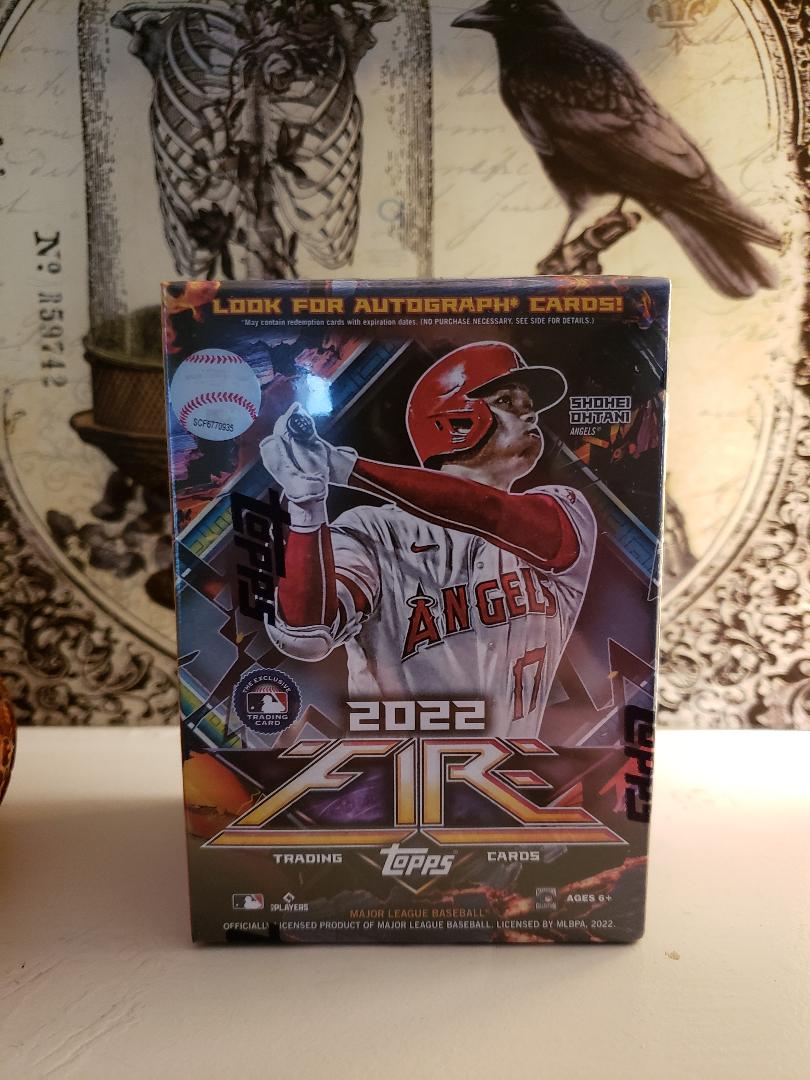 Mercy it's cold out today. I don't like it when the furnace switches on in September. I'm surrounded by people who squawk about the heat so much that I equate warm weather with bitching, so I suppose I should be pleased others are now pleased. But, it's too damn cold for right now!
Let's light a fire and get things heated.🔥
I bought a blaster of 2022 Topps Fire recently. Well, "bought" isn't exactly right. It was another gift-card purchase, because why would I be buying this set with my own cash? Some folks would prefer an ebay gift card over one from Target where your choices are limited, but here's the thing:
I still trade with people. I need cards that they like. Having cards of all Dodgers is great for me, but it's not helping in trades at all (especially since I can think of at least five dormant Dodger blogs). I need inventory.
So, even as I've cut way back on new cards the last few years, I still grab stuff like this once in awhile, preferably on someone else's dime. 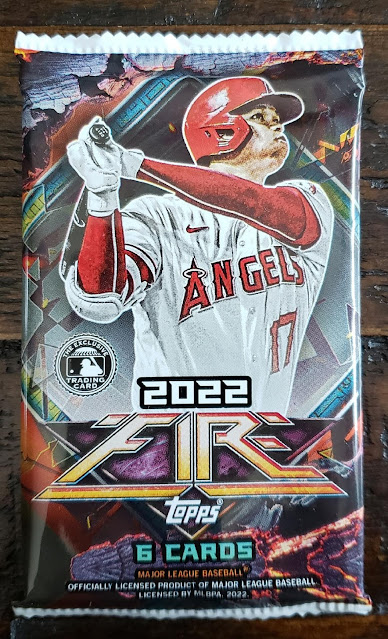 Fire is a goofy product, good for a chuckle, so let's see what I got: 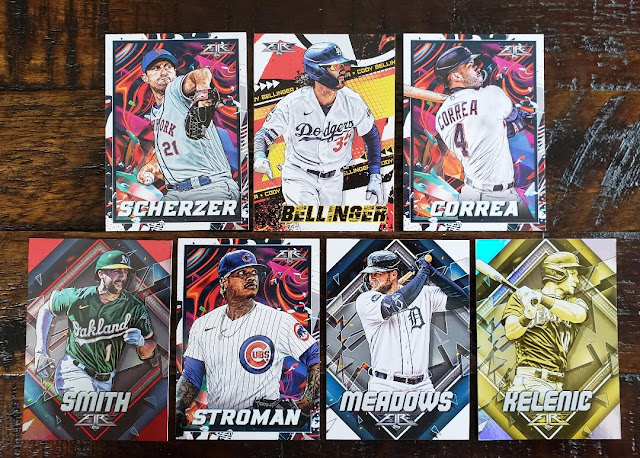 PACK 1
7-Max Scherzer, Mets; 85-Cody Bellinger, Dodgers; 70-Carlos Correa, Twins; 152-Kevin Smith, Athletics (red flame); 2-Marcus Stroman, Cubs; 123-Austin Meadows, Tigers; 123-Jarred Kelenic, Mariners (gold-minted)
All right, you astute readers may have noticed the wrapper says six-cards-per and that was seven. That's because the box says there are four "bonus" gold-minted cards randomly inserted into the packs, so some packs have six cards and some have seven. This does not explain why I got more than four gold-minted cards, though.
The first pack gives you a look at the three designs for the base cards. I'm pretty much over being interested in these. It doesn't help that the design for Scherzer and Correa is giving me 1995 Fleer vibes. Yikes. As for personal interest, yay, a Dodger pull! Also, there's that familiar downer feeling of picking up random blasters: the red flame is of a player I had no idea existed until pulling the card. 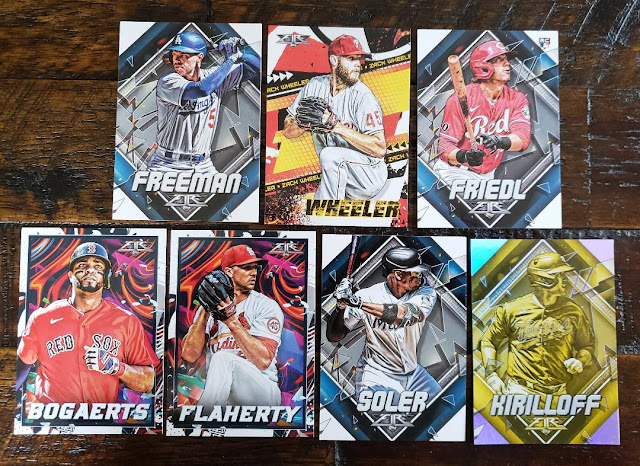 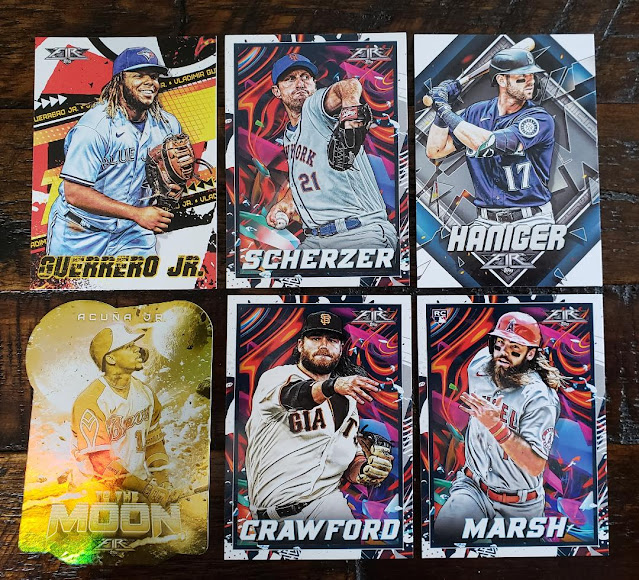 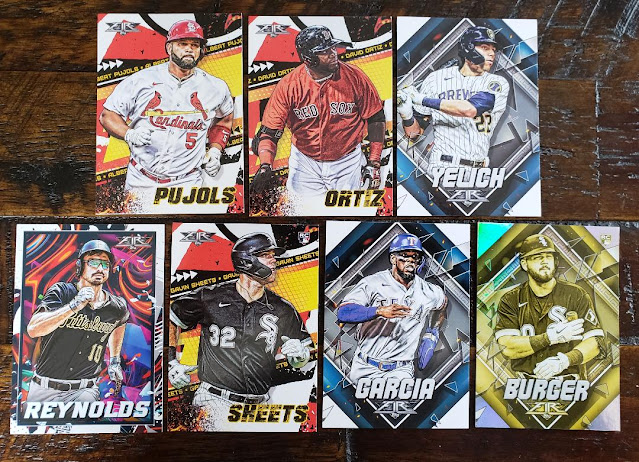 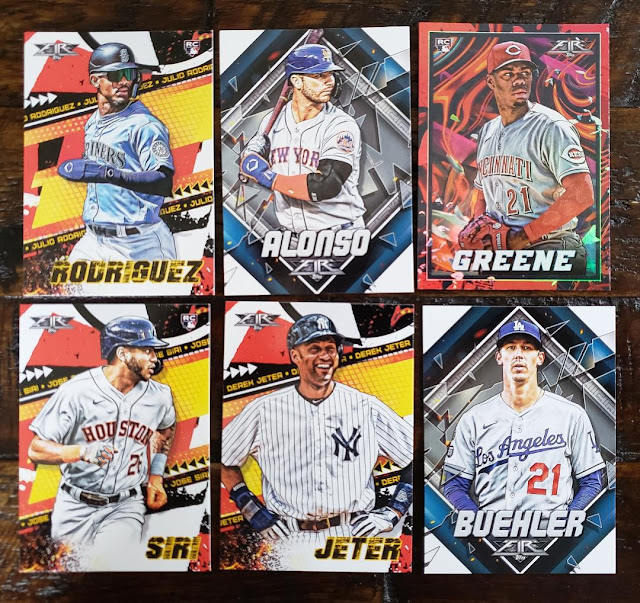 PACK 5
107-Julio Rodriguez, Mariners; 18-Pete Alonso, Mets; 45-Hunter Greene, Reds (red flame); 4-Jose Siri, Astros; 114-Derek Jeter, Yankees; 29-Walker Buehler, Dodgers
Topps gonna issue Jeter cards until the population doesn't remember who Jeter is, I guess. At least there was a Dodger in the pack. Also, the Hunter Greene card shows you how nice parallels are when you have a border, and yes, it's surprising that there is a bordered card in Fire. ... Oh, I think that's my first Julio Rodriguez card, maybe, rookies, ya know. 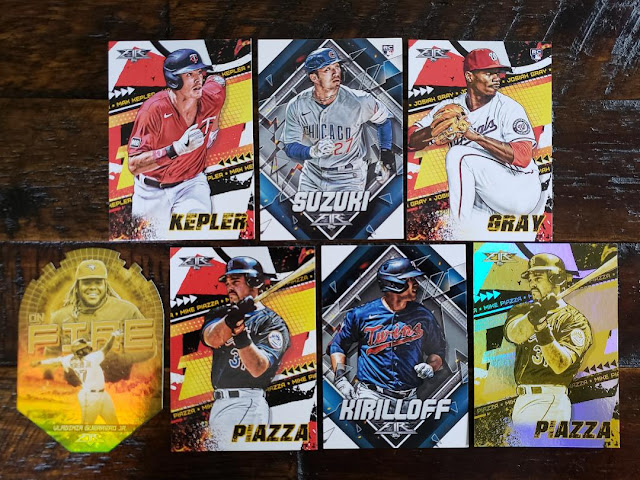 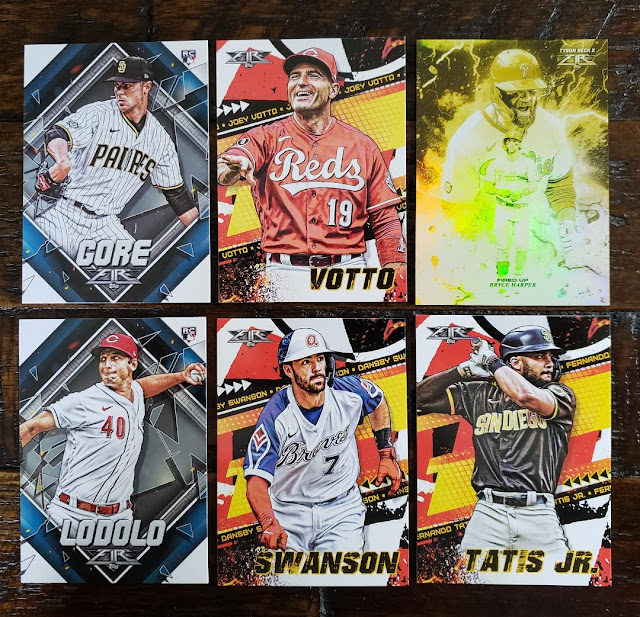 PACK 7
73-MacKenzie Gore, Padres; 100-Joey Votto, Reds; FIU-14-Bryce Harper, Phillies (Fired Up insert); 37-Nick Lodolo, Reds; 60-Dansby Swanson, Braves; 102-Fernando Tatis, Jr., Padres
Bleah, not much there. I guess the four bonus gold-minted cards are just the parallels of the base cards.
So, for free, that wasn't too bad. Three Dodgers I needed and a handful of cards that can be distributed elsewhere. And, yeah, a few cards that will sit in a box for awhile.
As for the set itself, I don't know why it still exists. I suppose it's nice for something to open since the summer's been a wasteland for new product. But I know this set isn't popular.
So, you know, fire away.
Maybe it'll warm things up.

buckstorecards said…
I've not seen any Fire on shelves up here yet, so I wouldn't mind seeing at least one of those Scherzers heading my way. I hope my mailer made it your way in time for you to get hyped for the big game Sunday.
September 23, 2022 at 7:11 PM

Nick said…
I actually spent some of my own cash on a blaster of 2022 Fire - first time I'd seen anything I even remotely wanted on retail shelves in a while. It's not bad, and even offers some of the first glimpses of dudes in their new uniforms which Series 2 doesn't seem to be doing anymore. (Which reminds me, I could give that Jorge Soler a good home if it needs one!)
September 23, 2022 at 8:54 PM

Mike Matson said…
I never see stuff like this in the wild.. Mind you I haven't looked in two years...
Those Guerreros are interesting.. As is that Votto
September 23, 2022 at 9:37 PM

Billy Kingsley said…
This set is so bizarre and colorful. If they do an NBA version I will probably like it even though it doesn't feature real photos, only messed with. The bizarre brightness makes up for it.
September 23, 2022 at 9:41 PM

Johnnys Trading Spot said…
I thought that the only available Topps Fire was online direct with
topps. Guess that was bad info. And you bet I'm all in for the Acuna (which is nice), even the swanson even though it looks so weird.
September 23, 2022 at 10:50 PM

Jon said…
Those who complain about the heat in areas that aren't warm year-round are some of my least favorite kind of people.
September 24, 2022 at 6:29 PM

baseballcardstore.ca said…
Fire never makes it to Canada, always been an American retail product primarily in Target's and Wallys. Except this year I think was the 1st time it was available at Topps directly because you know Fanatics has to start recouping some of that "monopoly" money.
September 24, 2022 at 9:16 PM

Fuji said…
It's warming up here in San Jose. Think it's suppose to be in the mid 80's throughout the week... with a high of 90 this Friday. If it were up to me, it'd be in the high 50's to mid 60's every day of the year. Cool enough to wear a hoodie, but warm enough to wear cargo shorts.

As for Fire, they're colorful and attractive. I just don't need them on a yearly basis, because then all of the designs start blending together.
September 26, 2022 at 9:08 AM

Matt said…
I like the concept of Fire well enough, but honestly the designs have gotten pretty indistinguishable from past sets. I think last year's retro-80's font would be the only design I could identify out of a lineup...
September 26, 2022 at 11:06 AM

Jafronius said…
Thanks for showing off the cards, didn't know there were die cuts in the set this year.
September 27, 2022 at 8:10 AM