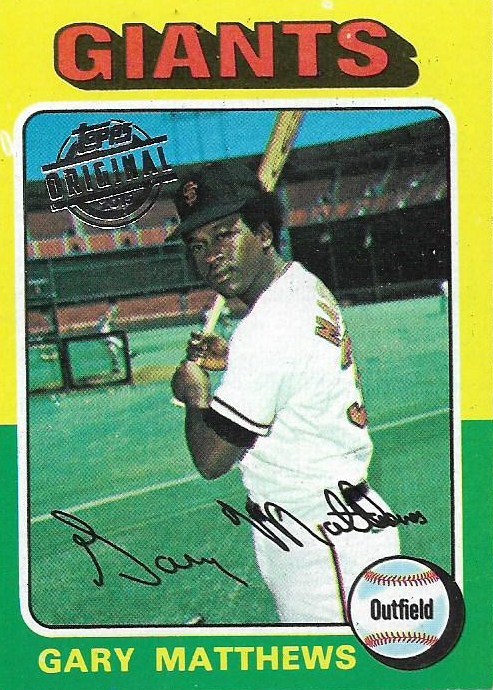 For the first time in exactly a year, I received a shipment of cards from COMC last week.
I wouldn't say COMC is truly back back. I did pay extra for the express shipping so I wouldn't have to wait however long we're waiting for COMC shipments these days. But the cards arrived in short fashion and it was nice to see something in the mailbox from my preferred online card site for over a decade until last year.
I had waited a year to order what was in my cart. I didn't want to be one of those people who paid and then waited nine months for shipment. I mean, what if I ordered them and COMC went under? Those were the kind of questions that were floating in my head last year.
That meant that I did lose a couple of items out of my cart, but no big deal. Nothing in there was anything highly sought-after and I merely replaced whatever I lost with a new version or something else I liked. Many of my collecting interests are not high on anyone's radar, especially 2020 flippers' radar, so I bided my time until I knew COMC wasn't going to disappear on us.
But I had missed COMC because I was comfortable shopping there. Also, there are items there that I don't find other places, or in volume that I can only find on that site.
For example these: 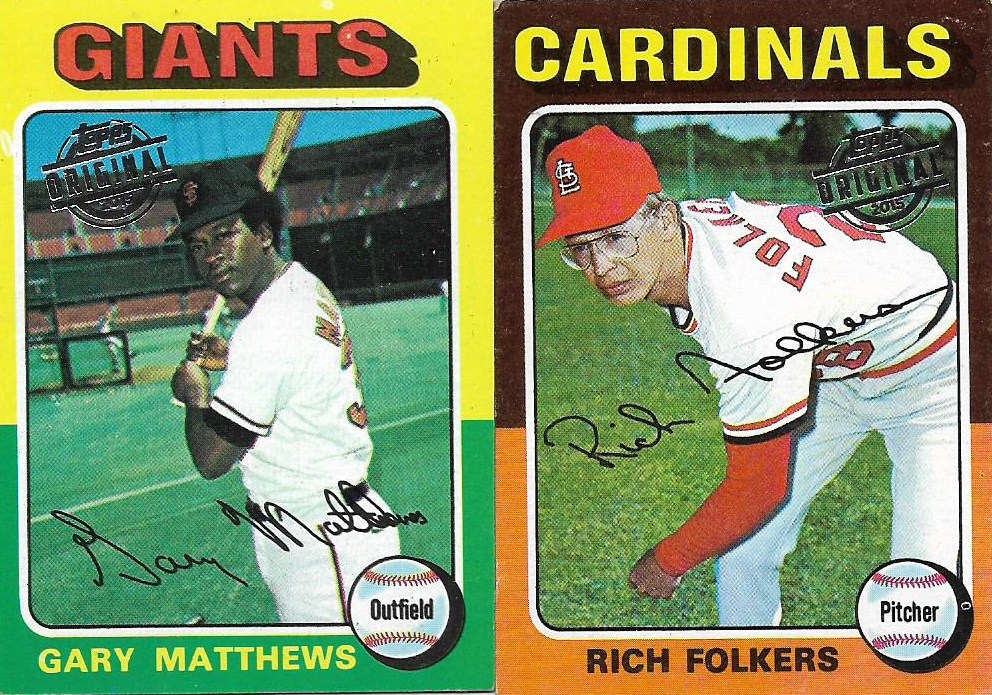 My wacky 1975 Topps buyback completion quest really took a hit when COMC started to have issues. I had picked up only a handful of '75 buybacks in the last year, which was quite disappointing as I was closing in on a milestone with my ridiculous quest. 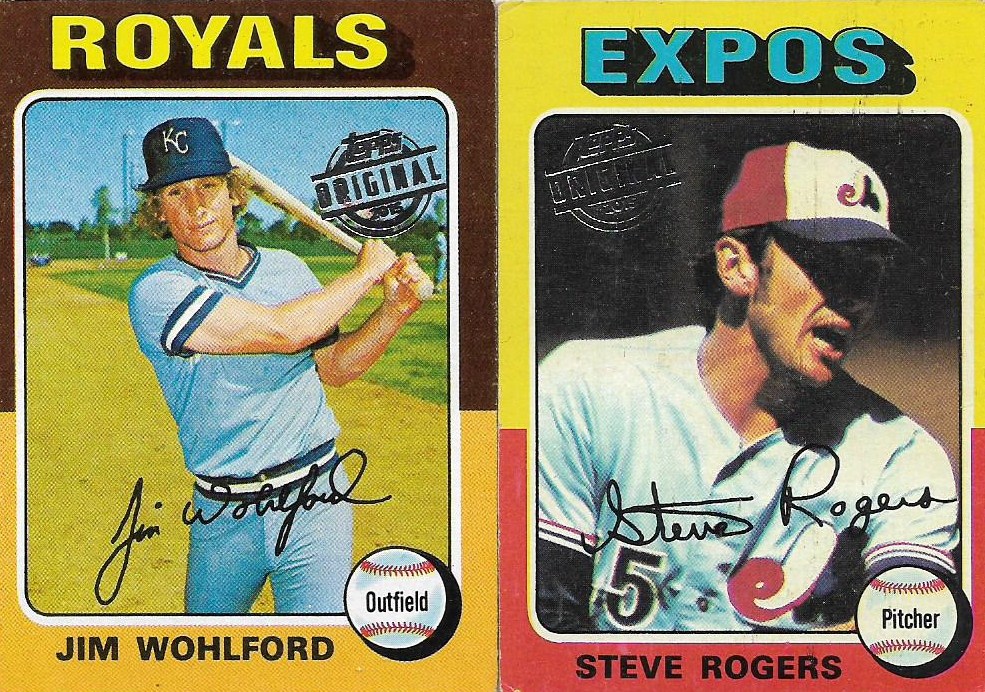 This was the top priority when I felt that COMC was safe enough to request shipment again. I wanted to get some more of those needed buybacks. It sounds weird, but these were the items I most looked forward to getting from my cart. 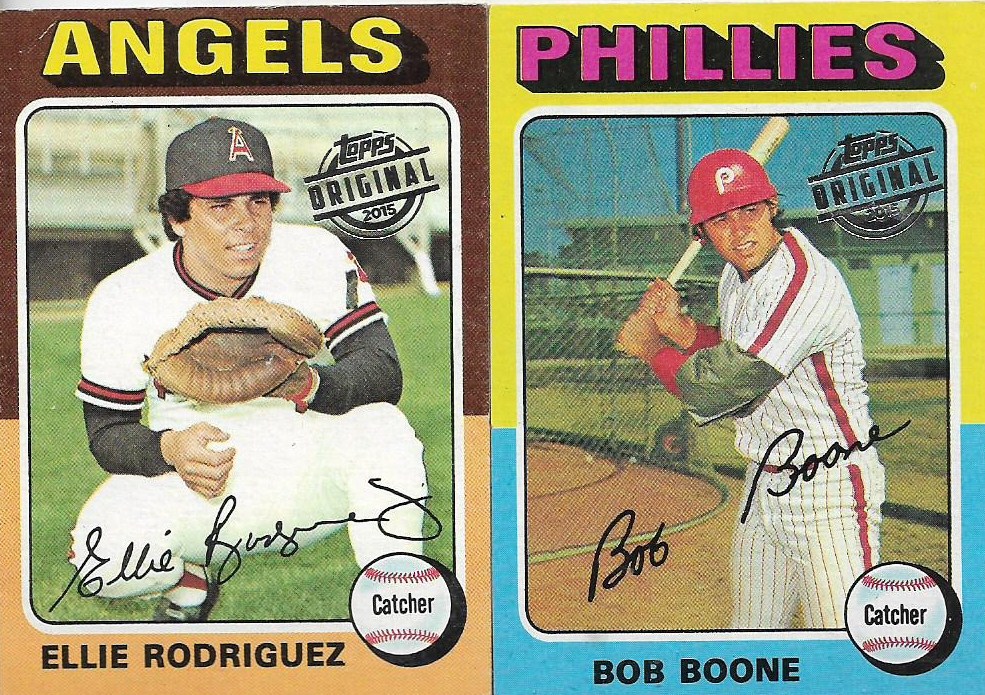 I picked up 10 of the buybacks that I needed for fairly reasonable prices and then once they arrived, I counted them all up to see if I had reached that milestone. 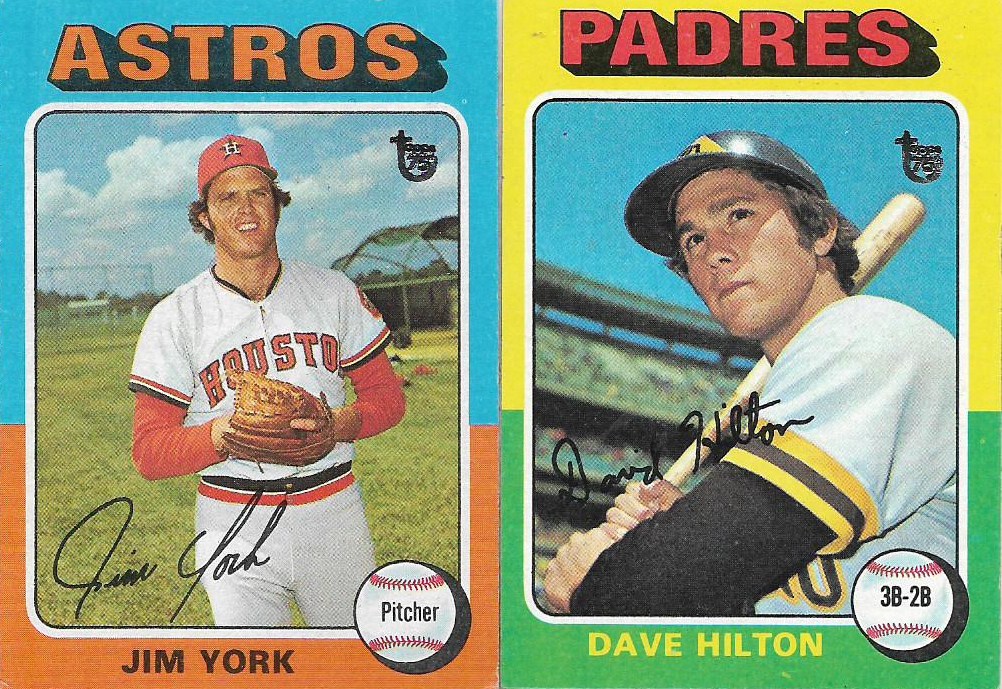 I determined that I had hit the milestone exactly -- 400 of the cards in the set in buyback form. 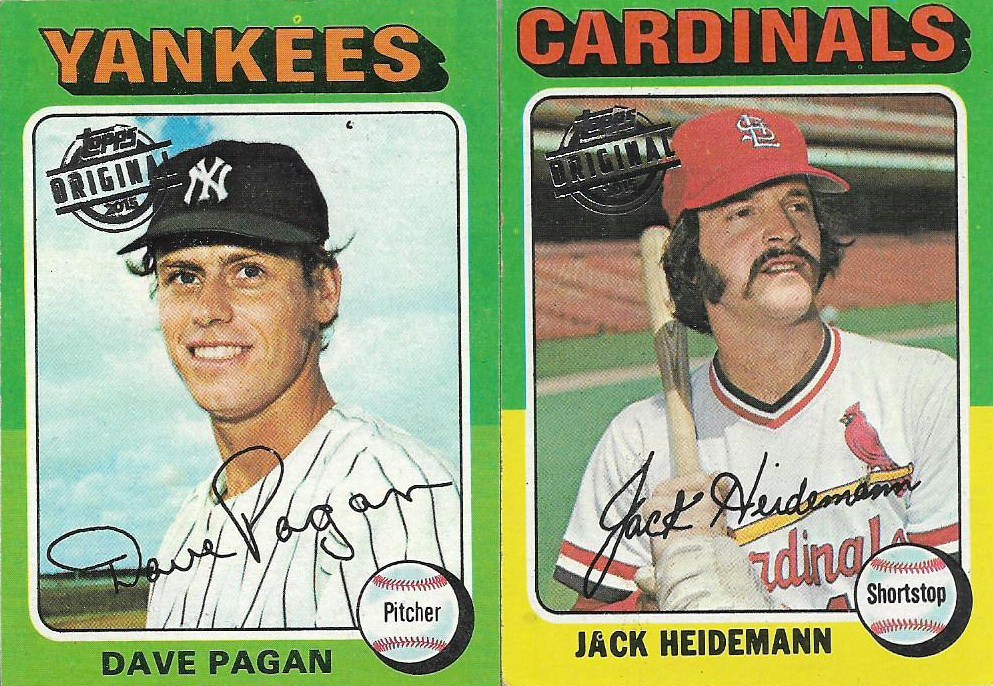 Then I recounted and cross-referenced and determined I was a little off.
I actually have 403 of the cards in the set as buybacks. That is 61 percent of the set.
After months of putting this effort on the back-burner, this arrival has spurred me on once again to try to pick up even more buyback cards from the set. I know for a fact that I can get to 430 total with almost no effort at all. After that, I'll have to do some nosing around on other sites. The next step after that will be bargaining and dealing with people that are either charging too much for them or people I know that have what I need and proceeding to throw cards at them.
Once again, I have never seen buybacks for some of the most famous cards in the set: the Brett and Yount rookies, Bench and Rose, many of the MVP subset cards, checklists, etc. That doesn't mean they don't exist. I just think some of it is highly unlikely (and in the case of Brett and Yount, if they do exist, they will be beyond my budget).
All right, that was what I was looking forward to most from COMC. Not very interesting to a lot of people but super interesting to me.
Here is another group of cards that were in my order forever that will appeal to just me: 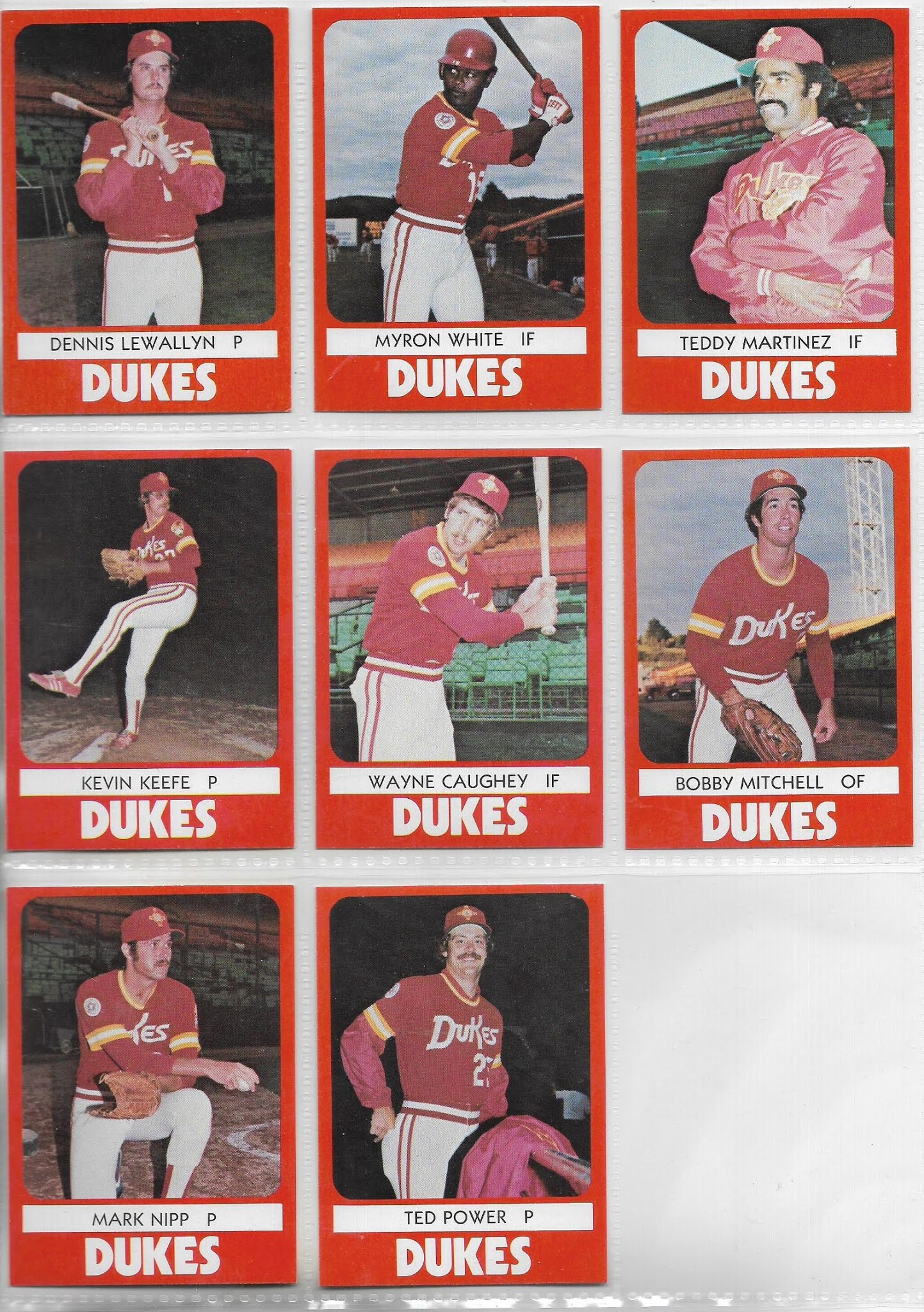 These were all needs from the 1980 TCMA Albquerque Dukes set. I have loved the design of these cards, and specifically the Dukes' appearance on these cards since I was a young teen. I've devoted a few posts to them.
With these cards I need just three more to finish the set. Jack Perconte is already sitting in my cart. The others are John O'Rear, usually priced out of my range for I don't know why, and Don Crow.
But getting three cards away from finishing this set, and having the big names -- Dave Stewart, Mike Scioscia -- is a feat I never thought I'd accomplish. For years I had no idea even how to obtain these cards.
All right, with those two interesting-to-me items much of what was left were some stray randoms: 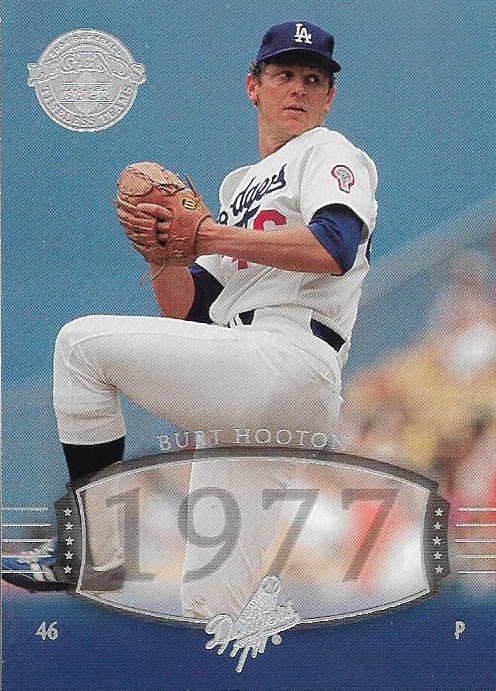 This was one of the sticklers from the 2004 Upper Deck Timelines team set. I think I just need two more to complete it. 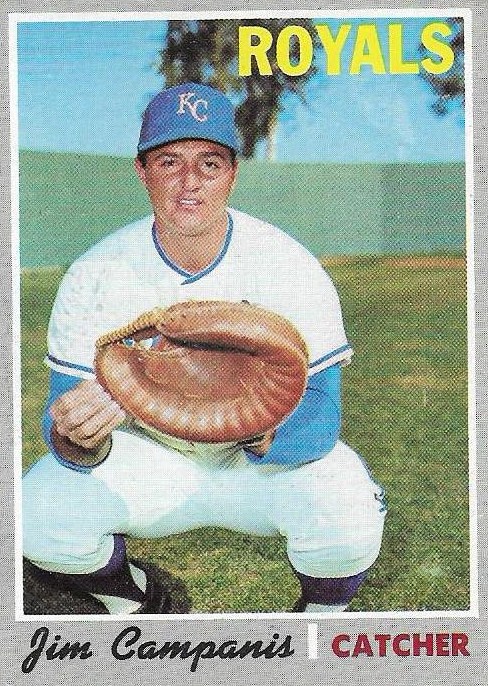 This, I can't believe stayed in my cart for that long. It's a high number in the 1970 Topps set. This is another set quest that has been hit hard by the pandemic. I usually rely on card shows to accumulate vintage set needs. I often pick up 50 cards at one time that way. But I haven't been to a card show since October, 2019.
It doesn't help that I don't find 1970 Topps inspiring enough to go all-out on it through online shopping. Some of those shows better start up! 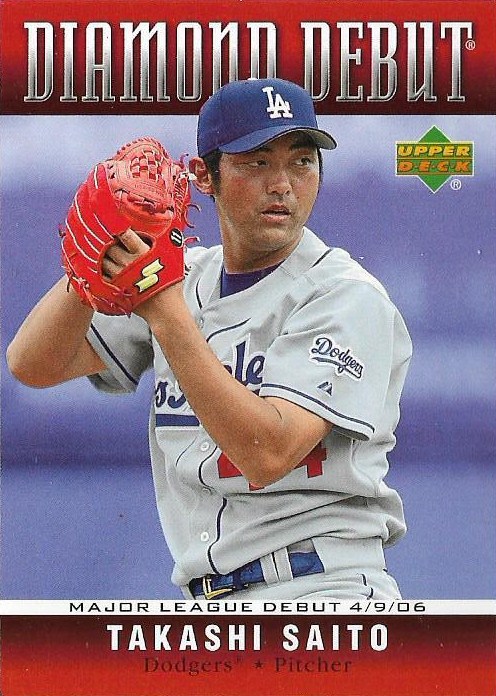 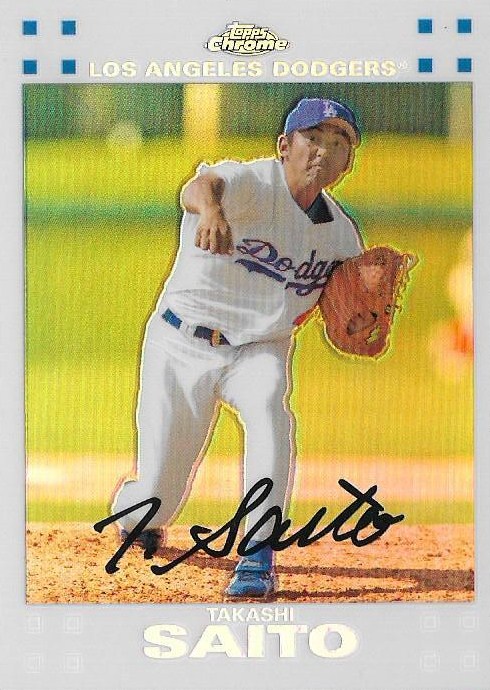 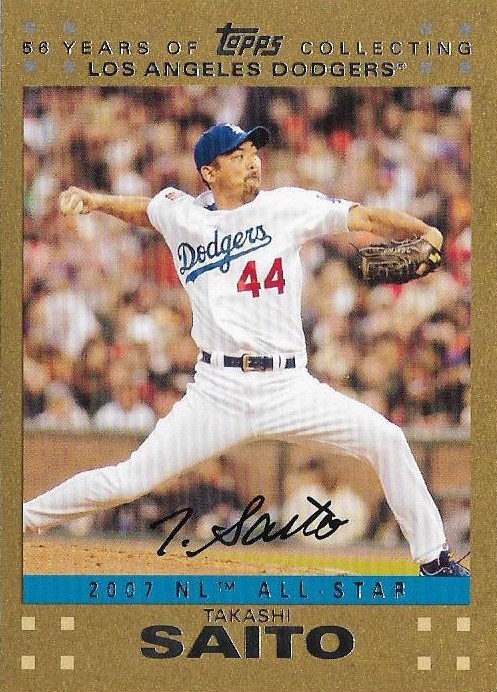 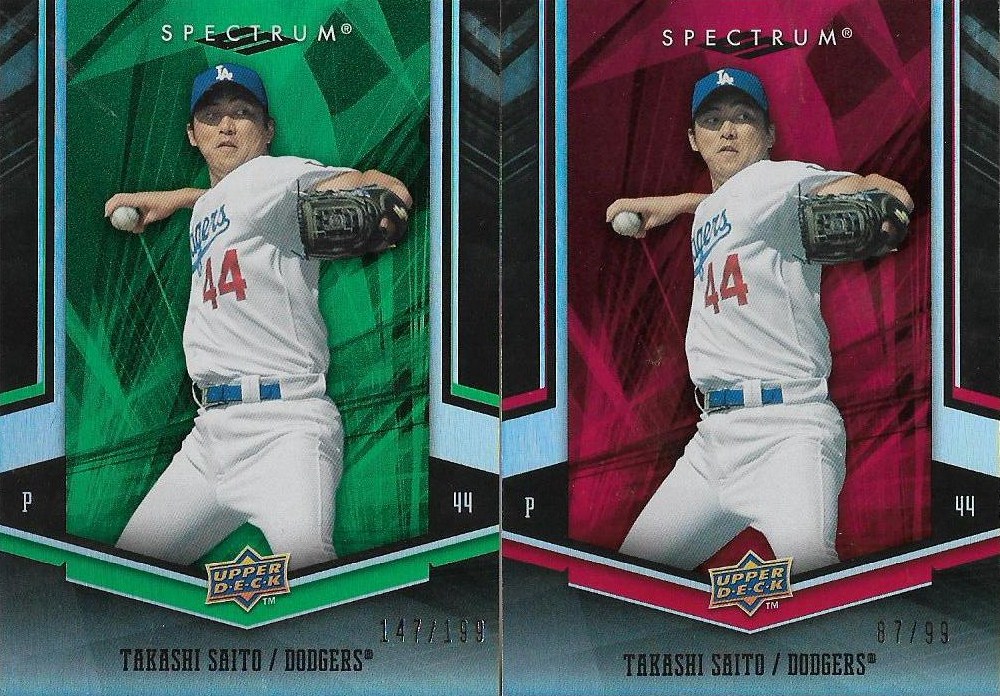 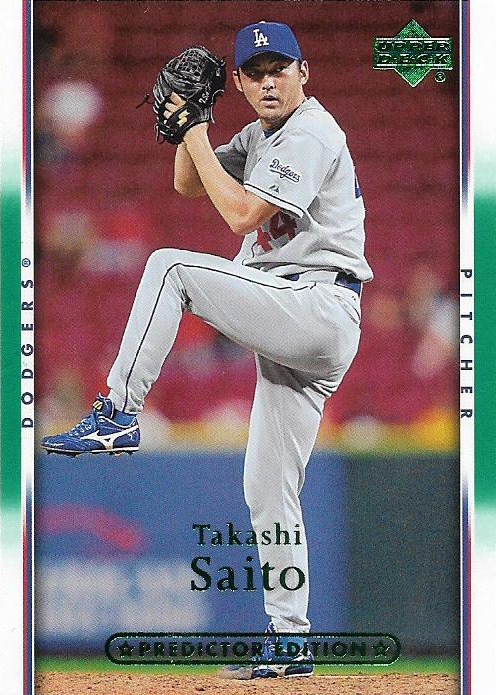 Often, when I'm filling out the cart, I go looking for cheap cards of a notable Dodger who perhaps folks have forgotten about.
Takashi Saito was a big deal with the Dodgers for a couple seasons 12 years ago. It amazed me how cheap the above cards were. And that's why I think it's silly to go after the latest and greatest all the time. You'll spend too much money and likely burn yourself out. 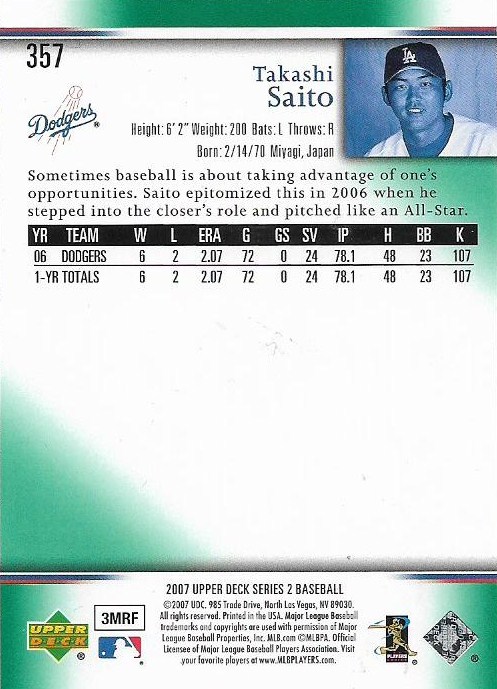 The Saito Predictor card is my first for this particular parallel. There certainly are a lot of them. I like the look (far more than I like 2007 Upper Deck). Even the back is cool with the green. 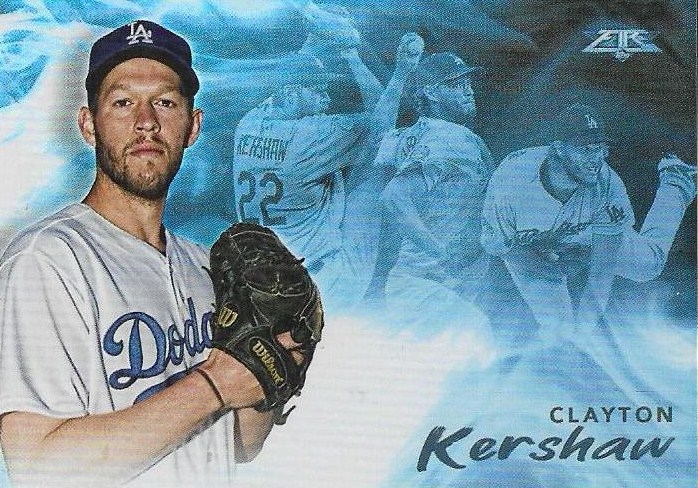 The rest of the cards I added just before I hit "ship." This Kershaw is from the 2019 Topps Fire "Smoke and Mirrors" subset. I was underwhelmed. 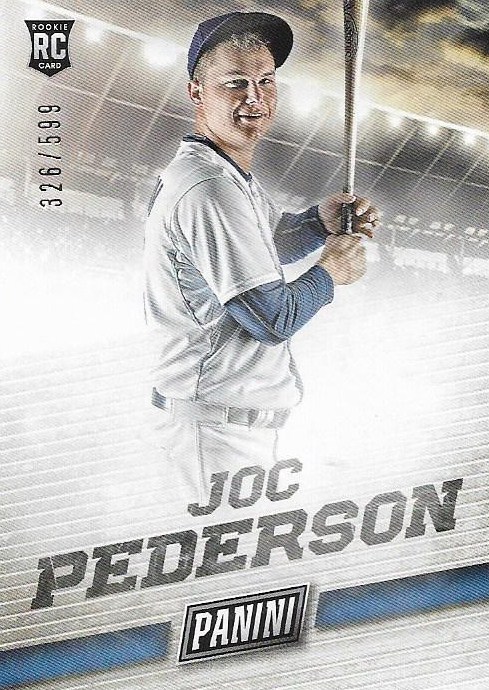 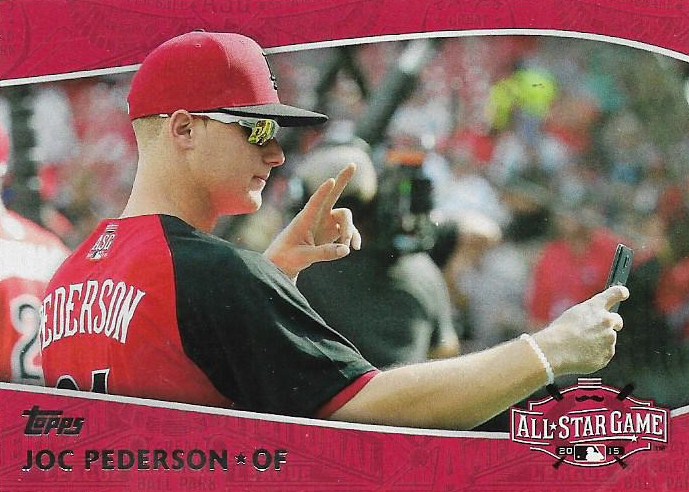 And I added a couple of "farewell cards" for the departed Joc Pederson, now toiling for the Cubs. I wanted to make sure they were fun ones, too.
And that was my return to COMC. It's good to have them back.
Since COMC's well-documented struggles, I have become more committed to other online buying sites like sportlots and ebay. It's going to be difficult for COMC to earn the allegiance that I once had to the site now that I'm more comfortable with others.
But as long as it feeds the need for oddball buyback set quests then I'll keep coming back.

Swing And A Pop-up said…
I remember Saito from his year with the Red Sox. What I remember mostly about him is that they gave him Manny's number.
February 23, 2021 at 8:09 PM

Nick said…
I'm glad that COMC seems to be back and functioning in a somewhat steady manner. I basically went a year between orders as well. I still have a handful of cards piled into my cart right now, but I also haven't been as active over there as I was pre-pandemic. I don't wanna be sitting on those cards for another 11 months.

Love the TCMAs by the way. One of my more frequent searches on COMC is "TCMA Minor League" to see if any somewhat well-known names and/or quirky cards fall through the cracks.
February 23, 2021 at 8:37 PM

Fuji said…
61% of the way there is quite the accomplishment and very impressive.

As for Saito... he was awesome when he came over here (especially in LA). Gotta wonder how much fanfare he would have received had he arrived ten to twelve years earlier.
February 23, 2021 at 10:53 PM

Chris said…
COMC maildays are always special, and it's an encouraging sign that their turnaround times are getting a little better. Your '75 buyback project is quite a challenge! I hope you're able to track down a few dozen more of these and hopefully finish the set one day. I'll be interested to see how many stamped singles exist of the big RCs and HOFers.
February 24, 2021 at 8:18 AM

Jon said…
I can't comment on shipping times, yet, but have noticed that they've been adding people's submissions to the site much quicker as of late. It's nice to see all the "new" stuff showing up, even if a lot of it is priced for those with "investment" funds.
February 24, 2021 at 8:24 AM

Old Cards said…
Some time ago, I commented that your desire to have the same identical cards with a stamp on them was beyond me. You basically told me that there is a lot that is beyond me when it comes to collecting. I can't argue that. However, I do think it is interesting that you now call it your ridiculous collecting quest. I may not understand it, but I do wish you the best in your effort to complete the set. Enjoy your blog.
February 24, 2021 at 4:08 PM

night owl said…
I am objective enough that I can see the ridiculousness of something while still enjoying the process. It doesn't have to make sense for me to enjoy it.
February 24, 2021 at 7:26 PM