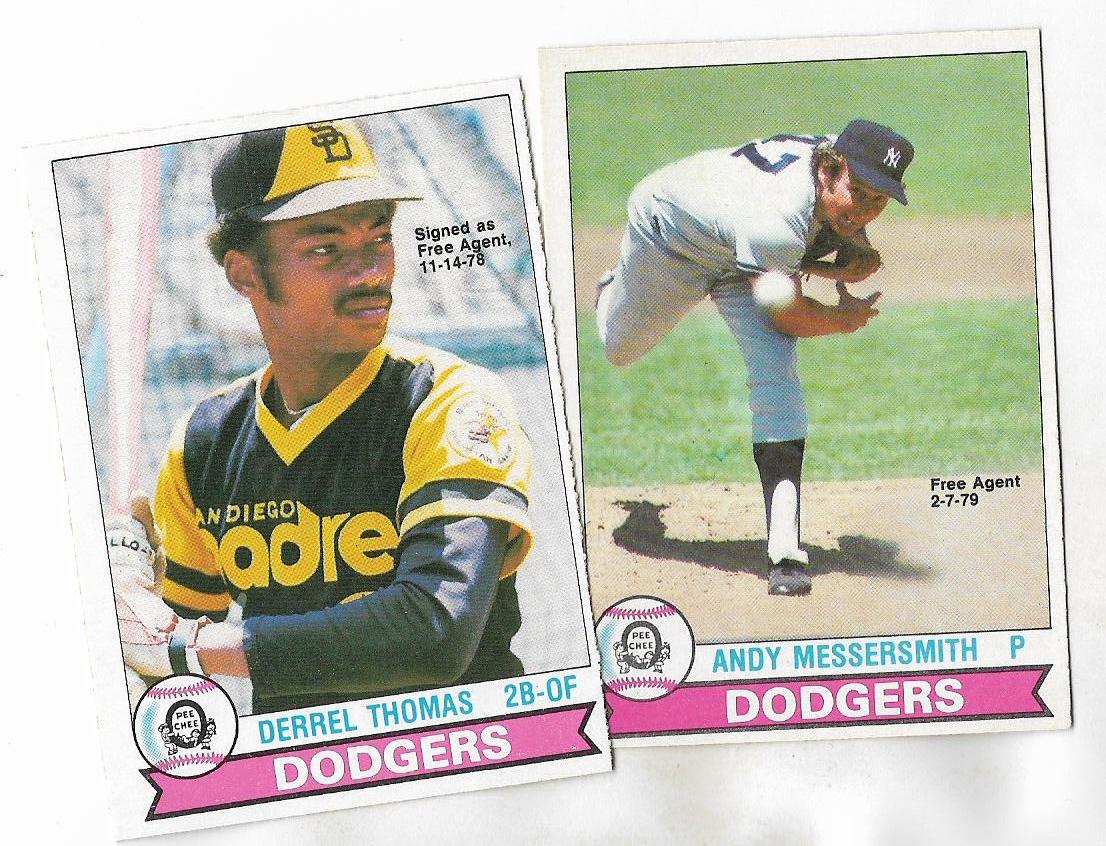 Yesterday was Ron Cey's 73rd birthday and, don't you worry, I took care of acknowledging it. It didn't show up on the blog but it did appear on Twitter. 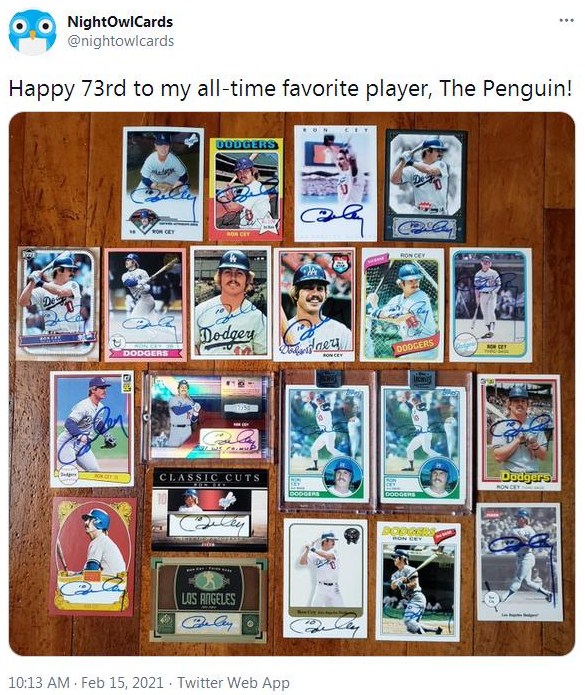 That isn't even all of autographs in the collection. You can fit only so much in the frame.
But the rate of me accumulating Cey cards, autographed or otherwise, has slowed dramatically. There haven't been many new Cey cards recently (Topps has mostly ditched its retro-appreciation of '70s/'80s players for, ugh, steroid-era '90s players). And all that's around for me to collect are a few autograph cards I don't own or a bunch of parallels.
I've mentioned this the last few Cey birthday posts, and I was starting to get sick of hearing myself repeat this lament. But then one day, while pondering cards to obtain, I looked to the ceiling and that's when it struck me:
Of course, north! Go north! O-Pee-Chee!!!
I don't know why I never thought of that before. I have OPC Ron Cey cards in my collection, but I've never thought about looking into owning as many of them as I can.
So I looked up what I needed and went about grabbing them. 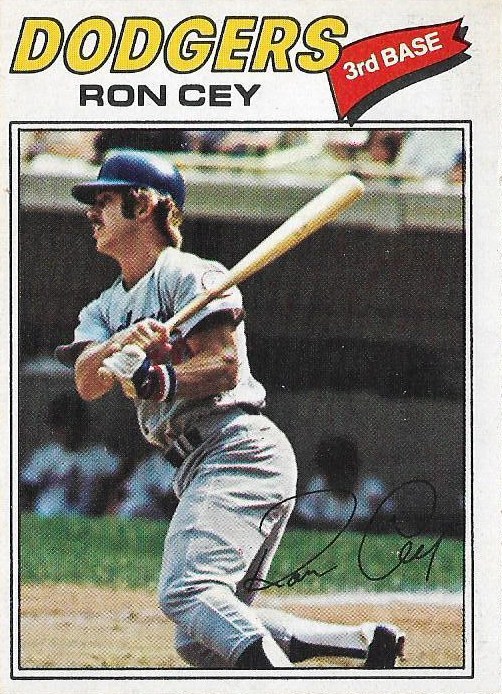 For some reason, I had never secured the '77 OPC Cey card. But now it's finally mine. 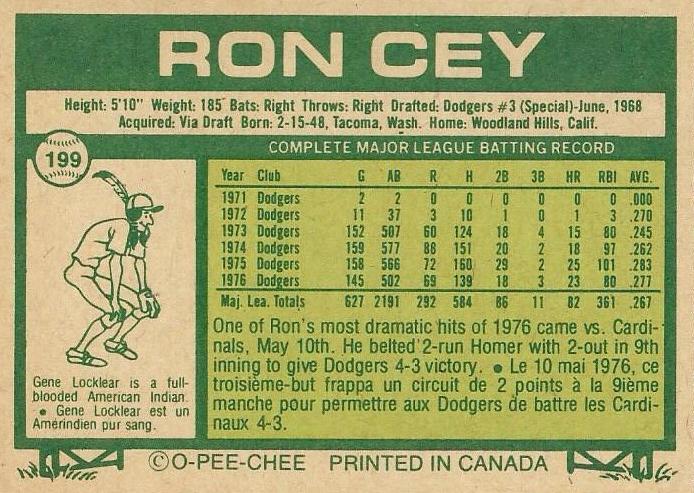 The '77 set doesn't do a very good job advertising its O-Pee-Chee-ness on the front, so here's the back so you can drink in its Molson Canadian glory. 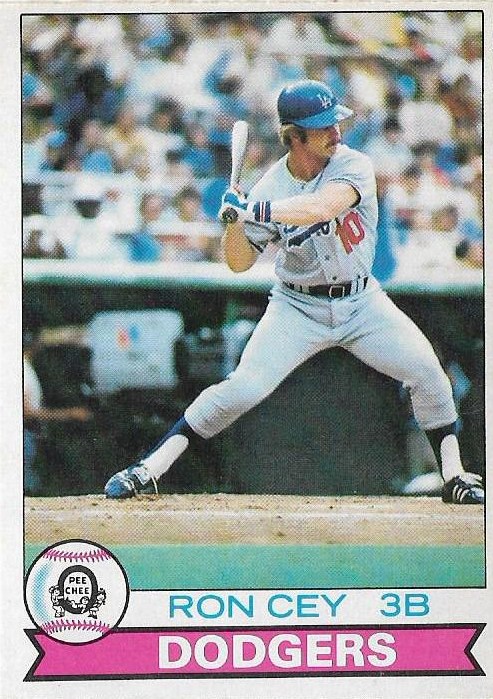 The 1979 OPC Cey card was up next. The '79 OPC cards are readily apparent because of the company logo on the front. That is one benefit of Topps plastering its logo on a card front for the first time in '79. 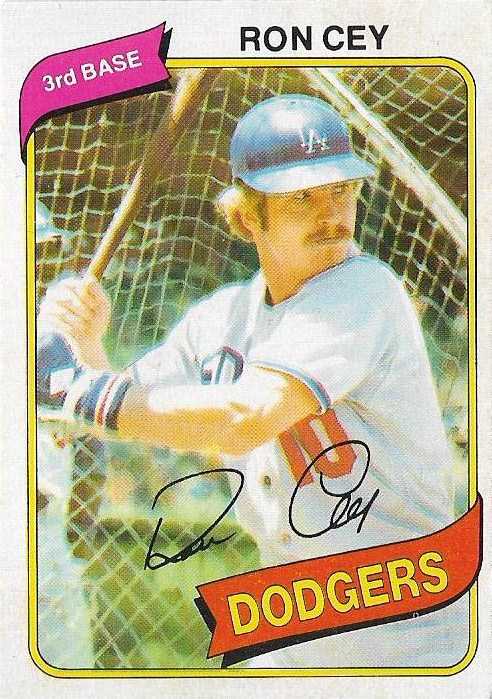 The 1980 OPC Cey was the third and final one I needed. Note how light the image is (and out-of-register). I don't know if every '80 OPC Cey is like that or just this one. 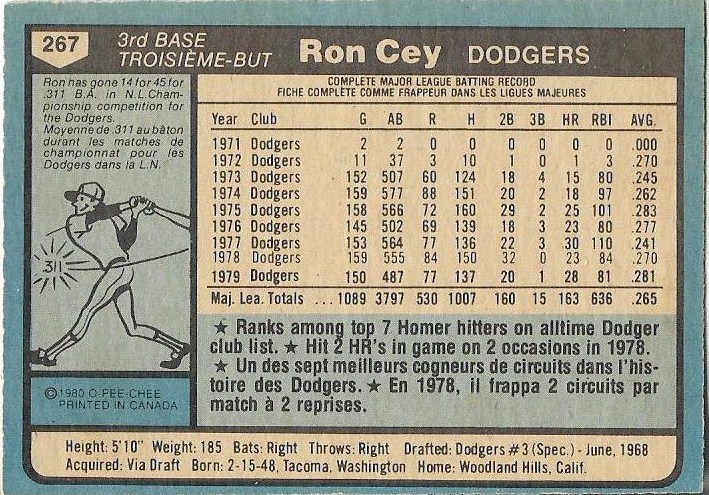 There is the back, with all kinds of OPC evidence. Check out the ragged borders that don't show up much on the front.
I was so excited about adding three more Ceys to my collection -- I have 136 total now, which is pretty good for a too-ignored '70s player with quite the postseason resume -- that I started paying attention to what I needed for OPC Dodgers in general. 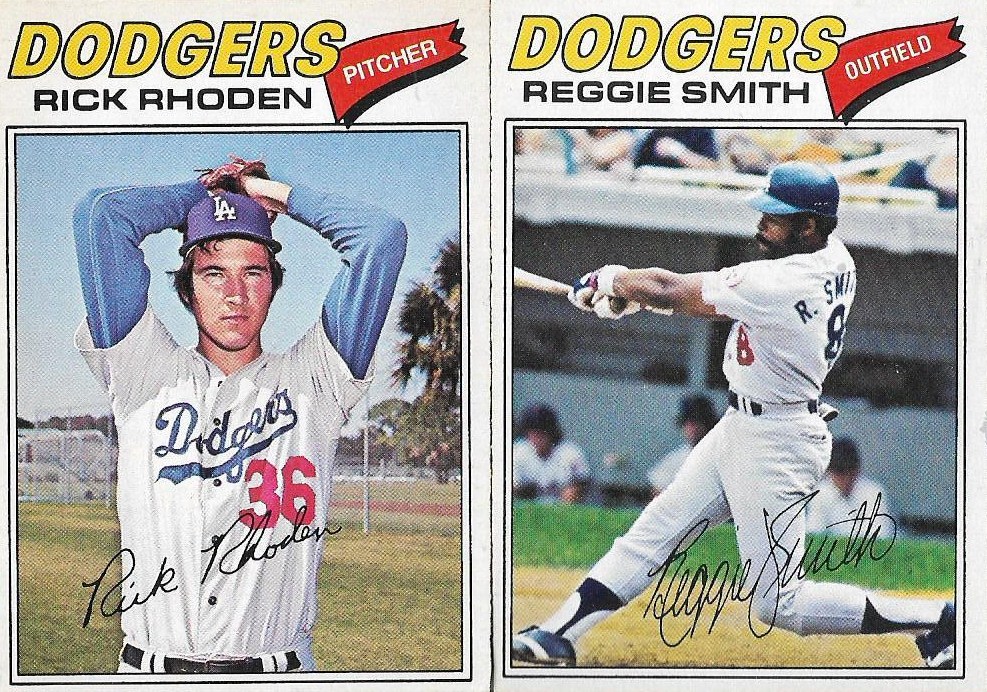 The '77 Cey came with two friends and now that OPC team set is complete. 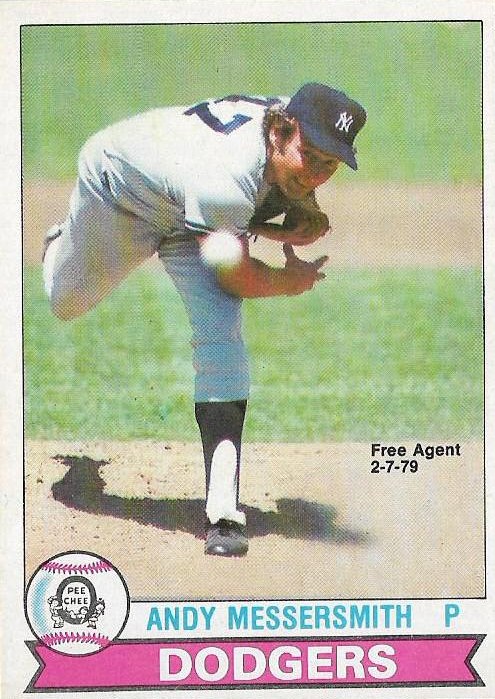 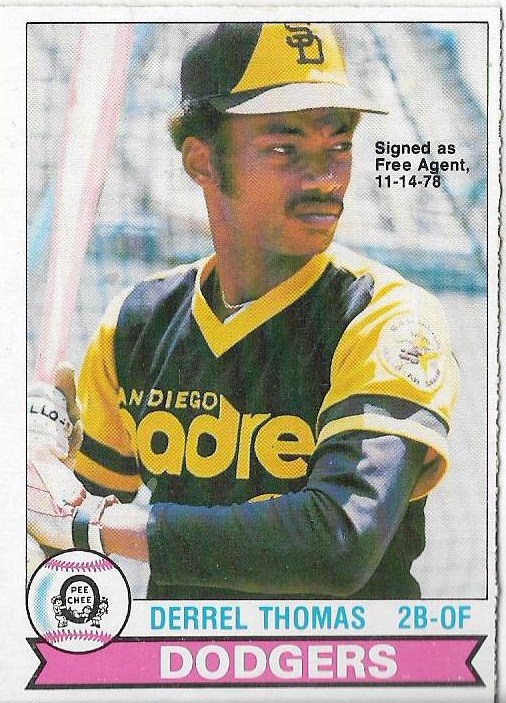 The '79 OPC Cey came with two wonderful Dodger buddies that exhibit just how fantastic 1970s O-Pee-Chee cards were. That Derrel Thomas in particular is full of clashing imagery yet still is fantastic.
I can't explain why I think this card is wonderful but the 1986 OPC card of Alex Trevino wearing a Giants uniform and the word DODGERS above disturbs me. Just consider it part of the fantastic frozen mystery of OPC cards. 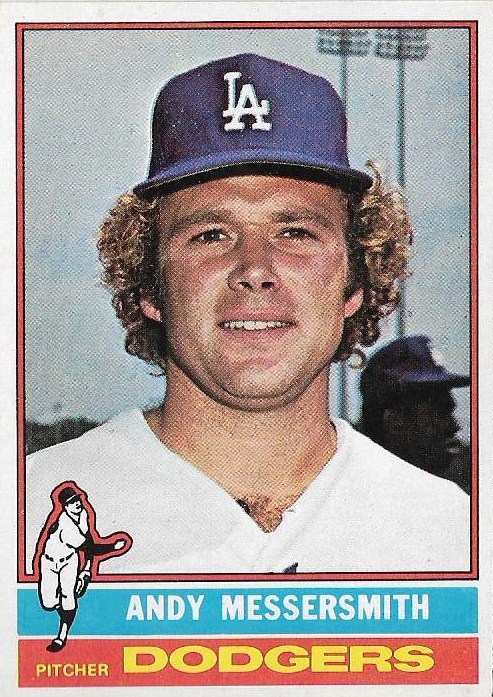 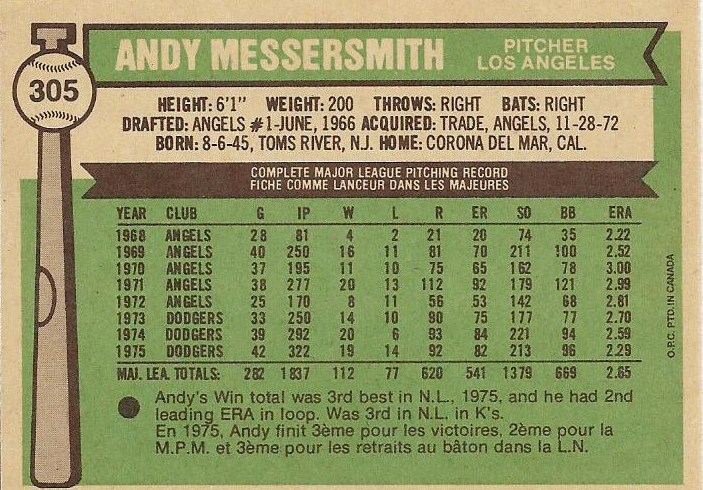 I added a second OPC Messersmith card with this impressively sharp 1976 card. I've always loved Messersmith's '76 card.
I have a long way to go with the 1976 OPC Dodgers set, as well as the '75 set and a couple others. OPC's sets varied in the '70s and, some, like '77 and '78 are easily completed, while others will be more of a journey.
To that end I have adding the OPC team set wants to the want lists on my blog. The '60s, '70s and '80s are done. I just need to add '91 and '92, I think.
It's taken me a long time to get to the OPC wants, but want-list making is tedious business. I'm also still working on replenishing my wants from when they were wiped out more than two years ago. What's taking me so long? Well, you try going through all of those Fleer sets from the early aughts where every team set is two stars plus three rookies who are only available as autographs. Good lord, what were cards doing in 2004?
But I've made some decent progress, including finally creating links for each year or period of years instead of the former giant page of wants that had to be as intimidating to look through as it was to update. So check out the new-and-improved want lists! (Still a lot of formatting issues, thanks Blogger).
Anyway, it feels good knowing that there are still a few Cey cards, real cards not a parallel of a card, that I need. I don't think I want a situation where I'm collecting 250 Cey cards a year a whole 34 years after he retired, as is the case for some poor, bastard player collectors. But I think one of the card companies could throw me a bone every third year or so like they do with Garvey.
Happy birthday, Penguin! Here's to a great year on the way to 74, the year of your solo card debut!

Nick Vossbrink said…
A shame that 76 OPC Messersmith wasn't changed to the Braves. Would've been a nice card to commemorate free agency.
February 17, 2021 at 1:04 AM