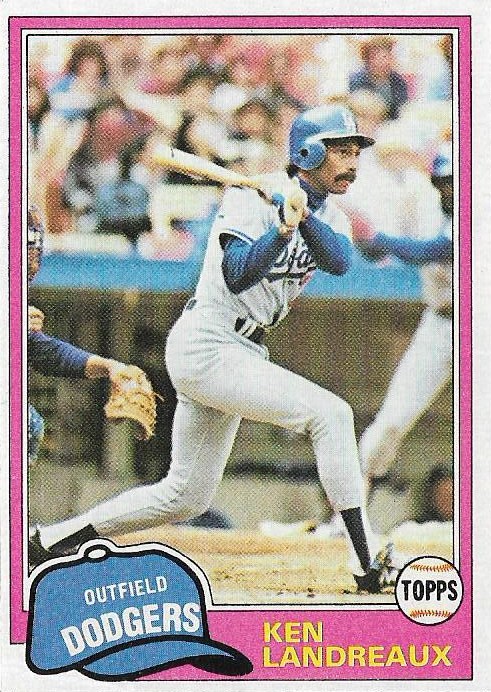 I watched Nachos Grande's 2021 Topps group break after work late Tuesday night (actually early Wednesday morning). I had the Dodgers in the break, and what I saw will be enough to keep me from looking for packs of the stuff. I always enjoy the new baseball card season, but I don't know what Topps is doing with its flagship design anymore.
I made out pretty good in the break. I was able to land all of the Dodgers in Series 1 except for Cody Bellinger and Gavin Lux (once again, don't tell me Topps doesn't secretly make certain base cards less available).
I didn't land any inserts but the special silver pack did yield probably my favorite card from the break: 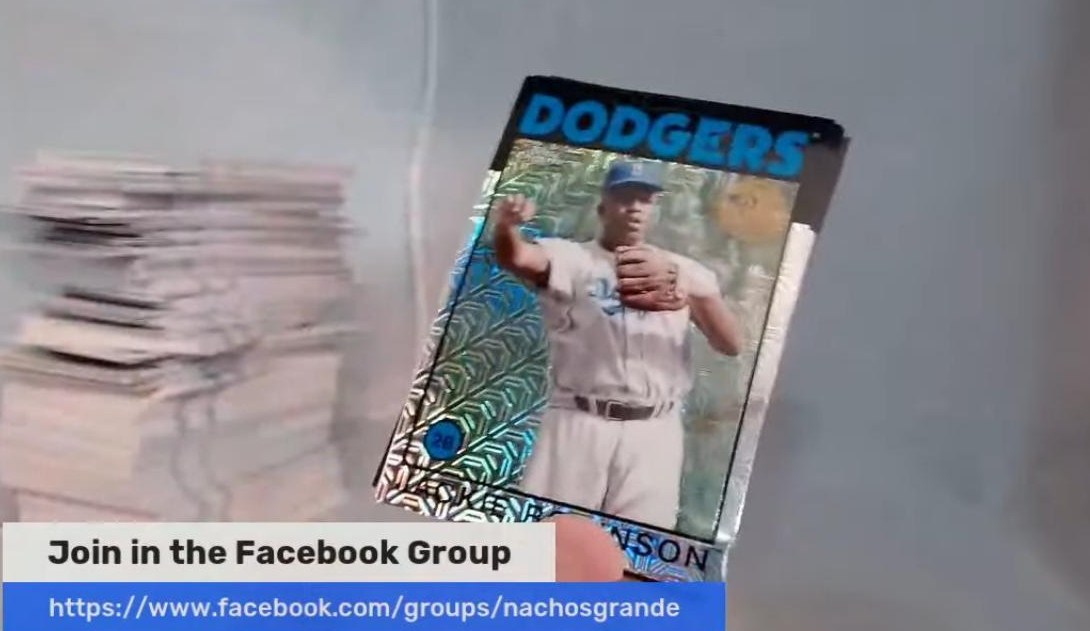 I'm still a sucker for shiny cards and Jackie Robinson cards even while I'd be happy if Topps stopped creating both.
It's nice to have another Jackie Robinson card in the collection because Robinson is my all-time favorite Black baseball player. I don't think that's a stretch, but as a Dodgers fan I remain enormously proud of my team's efforts to integrate baseball.
This is Black History Month, and I mentioned last year that I was happy to see a few more references to it than I had in the past. As I wrote in that post, Black History Month was celebrated in school every year when I was a kid in the '70s, and naturally I looked up to famous Black figures and, of course, Black ballplayers.
There continues to be a lack of Black representation in baseball, which is a shame because even though I am white, I was drawn to the Black players growing up and, to me, they made baseball, and baseball-card collecting, a lot more interesting. The same can be said for Latin players in today's game, but I still miss the Black contributions.
Last year, I formed my favorite Black team from when I was a youngster. This year, I decided to list my top 10 favorite Black Dodgers players.
I'm not going with the usual countdown format. There is no suspense here. You know who my favorite is already. You'd probably know if I didn't just mention it.
OK, here is the funkiest top 10 I've ever listed on this blog: 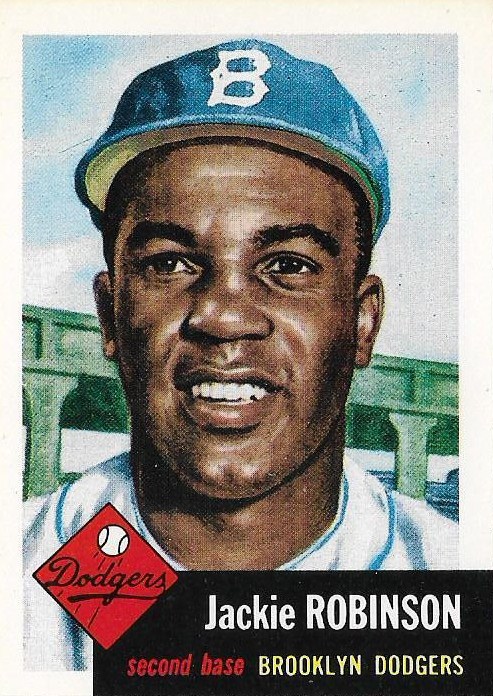 1. Jackie Robinson
Think how much fun baseball would have been if integration started like 40 years earlier. 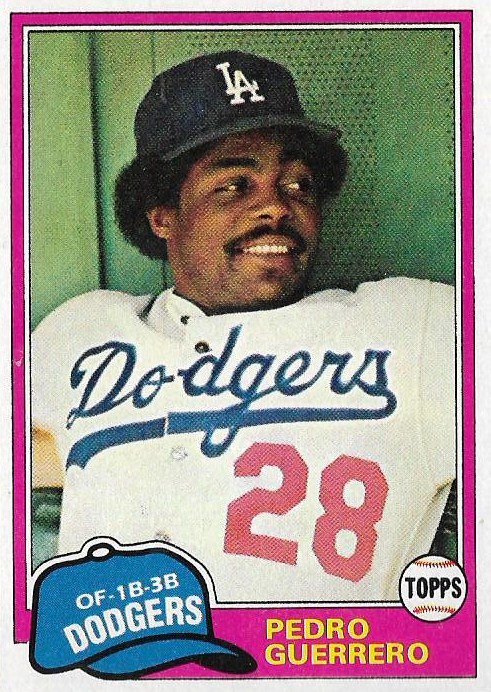 2. Pedro Guerrero
I debated whether to include Black-Latino players in this list but I decided that they've dealt with their share of injustice due to their skin color. So my favorite player for my entire time in high school deserves to be here. 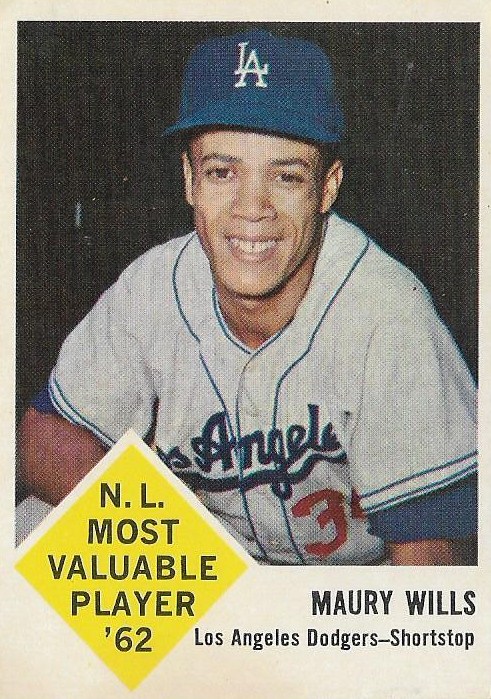 3. Maury Wills
I wish I could remember exactly when I considered Wills a favorite. His career was before my time, but there was that MVP card in the 1975 set and that Turn Back the Clock card in the 1977 set and I always thought base-stealers were the coolest players on the field. 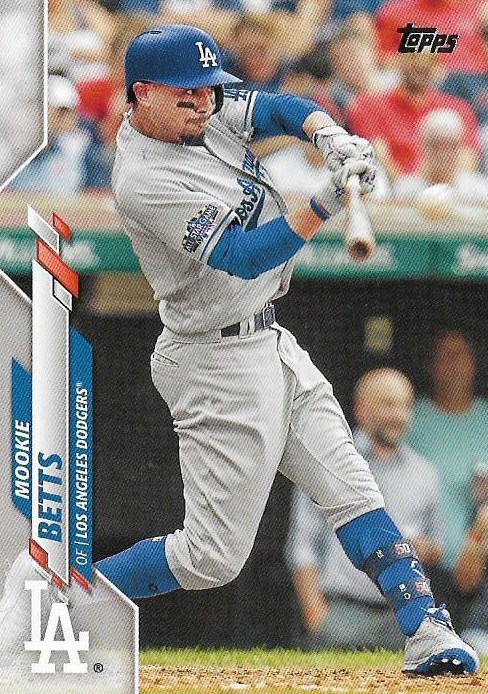 4. Mookie Betts
It did not take him long to jump in the top 10. Just one year! A World Series title will do that. 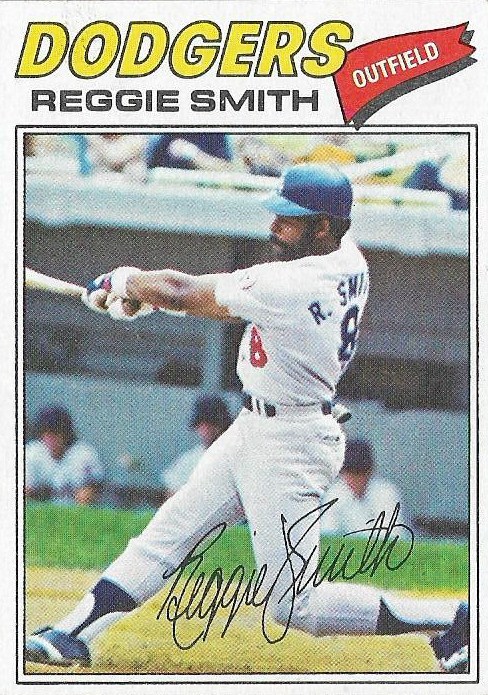 5. Reggie Smith
When Don Sutton uttered his famous words about Reggie Smith being the true leader of the Dodgers and Steve Garvey being somewhat of a facade (and then the punches flew), a young night owl nodded his head way over on the east coast. 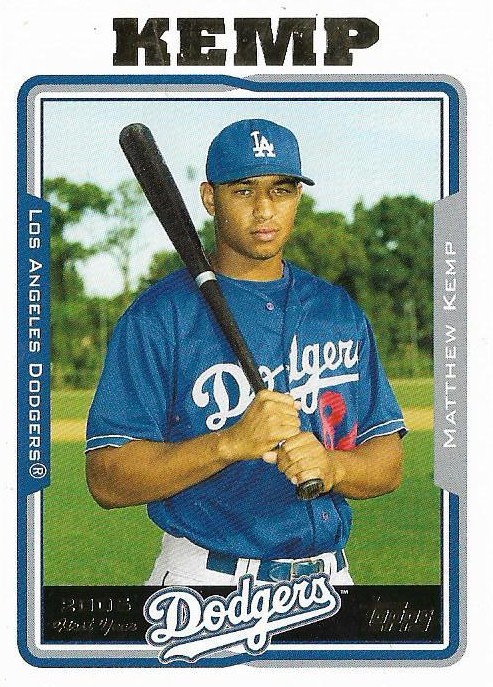 6. Matt Kemp
There always seems to be drama swirling around black star players. I don't necessarily think that's of their own doing -- it's more the system that they're in -- but it was definitely there with Kemp. The impact of Kemp's career with the Dodgers is bit forgotten, but he had one of the best runs of any Dodger hitter. 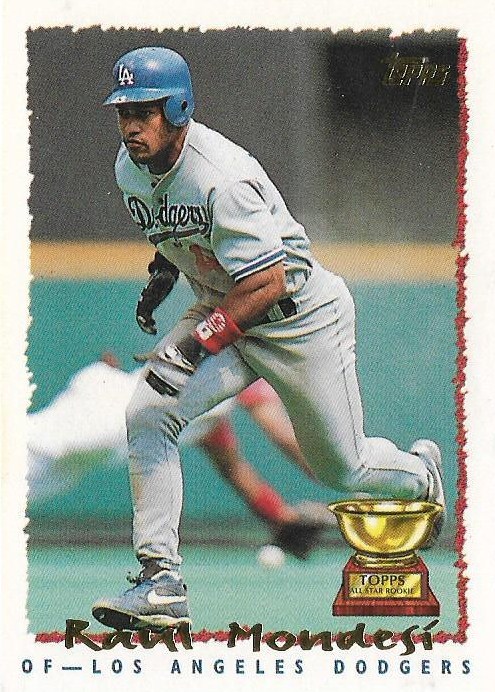 7. Raul Mondesi
I wasn't paying attention to baseball that closely during Mondesi's time with the Dodgers. But he had a way of getting my attention, with noisy displays of power and, man, that arm. 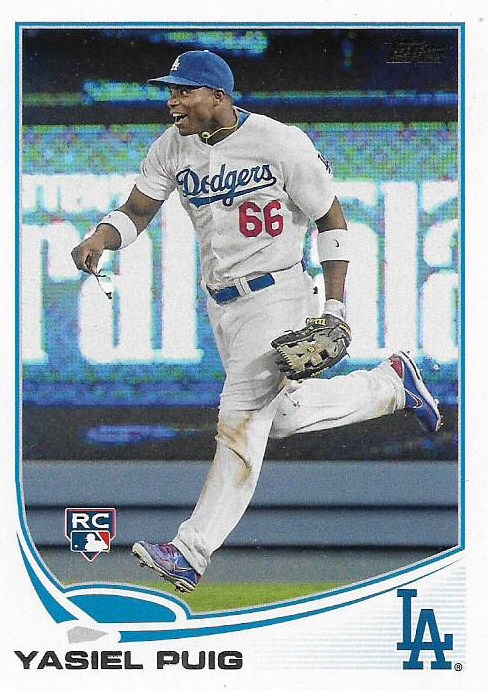 8. Yasiel Puig
More excitement from right field! I was quite entertained by how much people cried over Puig during his time with L.A. What fun to see people sputter and flail over one player. Puig never kept up his 2013 production but he sure had enough postseason highlights to be worth the trouble. 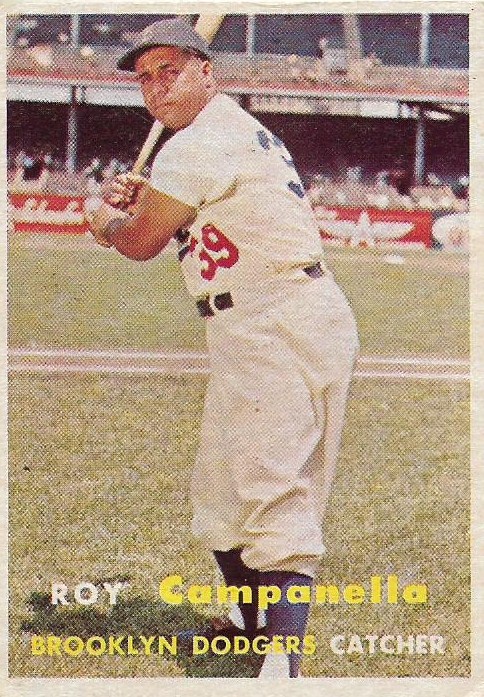 9. Roy Campanella
I know that if I was around when Campy played that he would be a lot higher on this list. 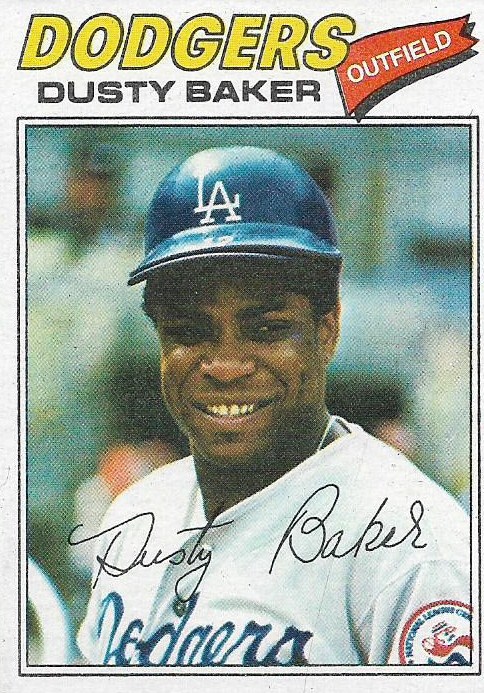 10. Dusty Baker
He surely was a lot higher on this list back when I was younger. But then he started getting involved with a nefarious team and it's a feat that he's still on this list. But I loved the young Dodger Dusty.
There were a lot of favorites left off the list, players like Jimmy Wynn, Ken Landreaux, Joe Black ... even Rickey Henderson!
I have heard laments about the lack of Black players in the majors for years. There are some recent signs of improvement. The Mariners had a dozen Black players on its team a year ago.
Still, just under 8 percent of players in the major league are Black. When I was a kid, it was 20 percent.
If MLB wants to do Black History Month proud, it has to do a lot better than that.

Doc Samson said…
Well done, Mr. Owl. Maybe MLB should start taking suggestions from Black player on what they would like to see. Perhaps some sort of a roundtable of current and past greats of color. Maybe even stream and broadcast it live so every baseball fan can see what they have to say. At this point, we should have at least a sincere discussion about this subject.
February 11, 2021 at 7:33 PM

Brett Alan said…
Wait, is the nefarious team the Giants or the Astros?

I'll have to think about this for my Mets. Cleon Jones, Tommy Agee, and Dwight Gooden certainly near the top of the list. And Dominic Smith rising fast.
February 11, 2021 at 9:03 PM

steelehere said…
My ten in no particular order would be

As a bonus, I’d include Davey Lopes (he’s of Cape Verdean ancestry)

Matthew Glidden said…
You hit a lot of my top choices, including the sweet stache of Kenny Landreaux. I'll add Vada Pinson and Manny...anny...Mota...ota.
February 12, 2021 at 8:55 AM

gcrl said…
dusty baker was the first player i thought of the moment i learned that there had been a "color barrier" in baseball. this was in 1978, and i couldn't fathom the dodgers as a team without him and reggie smith on it. it blew my mind that there was a time that dusty wouldn't have been allowed in the league.

my list would be similar to yours - maybe a change in the ranking here and there - with eddie murray and gary sheffield getting some consideration, too.
February 12, 2021 at 11:26 AM

Adam Kaningher said…
To your comment on what baseball would have been like if integration began much earlier, something that isn't talked about often enough regarding Negro Leaguers is which MLB teams they would have fit on had they been allowed to play.

We all think that Pete Rose as an Expo was just...weird, right? Can any of us really picture Satchel Paige with say, the Reds? Cincy was never known for legendary pitchers, and their first Cy Young award was Trevor Bauer last year. Paige would have made a much better Cub in my mind.

Not that I can tell you the first thing about the general demeanor of the St. Louis Browns in the 1930s and who would have fit in there, but I think it's a useful concept to consider now that the Negro Leagues have finally been elevated to Major League status.
February 12, 2021 at 9:03 PM

Nick Vossbrink said…
Thanks for including afro-latino players. Felipe Alou has been pretty clear in interviews about how his first trip to the South went when he was playing ball and the locals decided that he counted as black. It's definitely a complication but it's good to recognize them. Also good to recognize that MLB's black numbers include them and so the number of African Americans is even lower. Which is especially distressing.

Also is Dusty the only player who both Giants and Dodgers fans would agree on as a favorite?
February 12, 2021 at 10:24 PM

carlsonjok said…
Weird. We went to high school at about the same time and in cities a short drive apart. But, my school district never covered Black History Month.