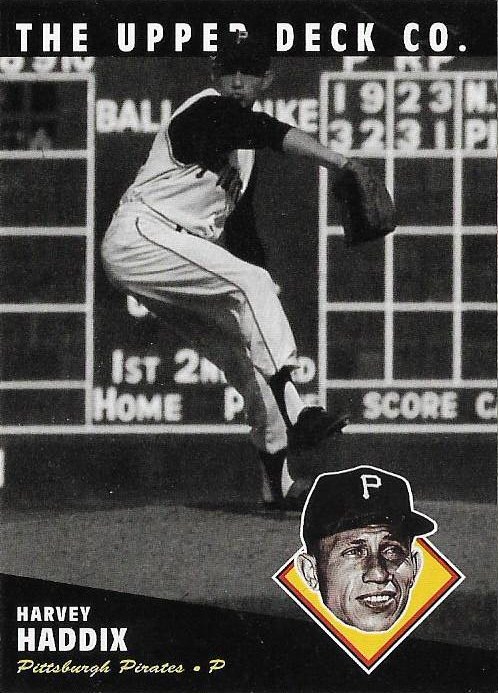 I obtained this card from Jay at Cardboard Hemorrhage in one of his giveaways recently. The 1994 UD Heroes set is one of the better retro sets from the 1990s, and I'm casually collecting it -- so casually that you may never see a want list.
Haddix is a popular figure among non-Hall of Famers because of his Hall of Fame feat. He tossed 12 innings of perfection only to finish with a loss when the perfect game, no-hitter and shutout ended in the 13th during a game against the Milwaukee Braves in 1959.
For decades afterward, Haddix joined all of the other no-hit artists even though he never experienced the joy of the vast majority of no-hit hurlers, completing the game with the no-hitter intact and winning the game. MLB placed his achievement on the list of official no-hitters.
Then, in 1991, baseball changed the qualifications for what is considered a no-hitter. The new rules, set by the Committee for Statistical Accuracy in September 1991, said an official no-hitter would be a game that lasted nine innings or more in which the game ended with the no-hitter intact.
That rule change threw Haddix's effort off the list, as well as 35 other pitching performances that had once been considered no-hitters but had either not lasted nine innings or had ended with a game-deciding hit surrendered by the team that was hurling the no-no.
These "no no-nos" fascinate me. Here are some of the cards that I have of pitchers who had a no-hitter booted off the official list: 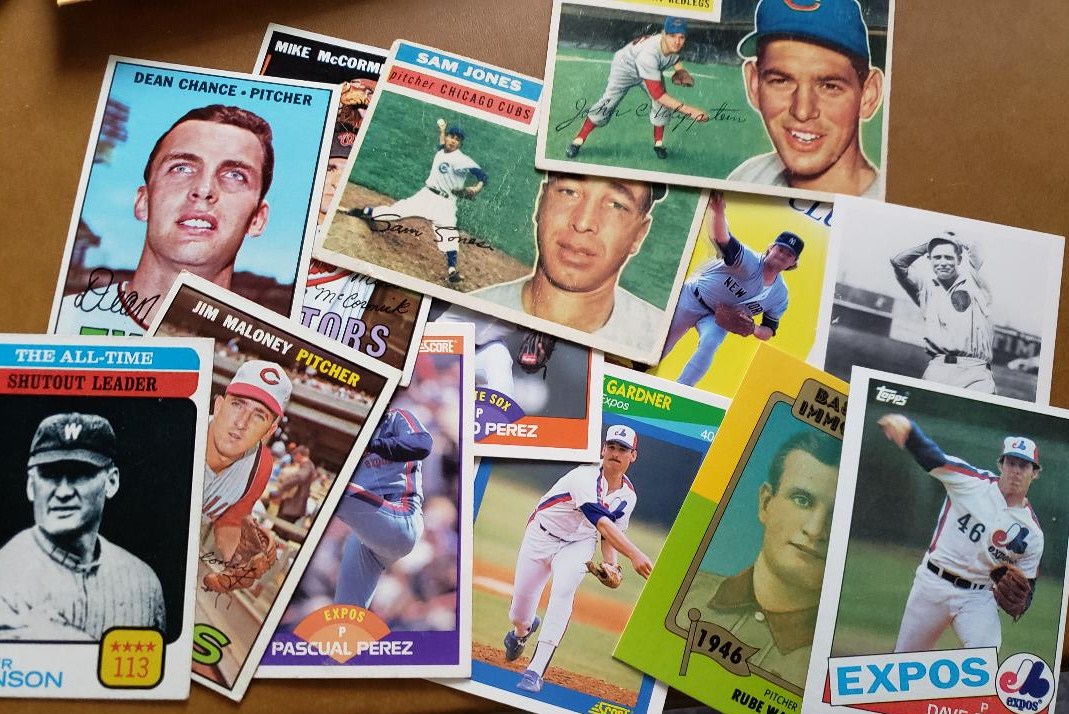 That's an interesting little mini collection, right? If I was the kind of collector to accumulate mini collections, I'd probably consider putting together a small binder of these guys.
Some of the players above actually did throw a legitimate no-hitter during another game. Walter Johnson, Ed Walsh, Sam Jones, Jim Maloney and Dean Chance all were dominant enough that they each threw at least one other no-hitter that was stamped for approval by MLB.
But here are some guys who once could claim no-hit status but now can't: Mike McCormick, July 12, 1959
McCormick pitched a no-hitter for five innings for the Giants against the Phillies. Then, in the sixth inning, he allowed a single and walked the bases loaded before the game was called by rain. It was declared official after five innings according to MLB rules and McCormick had his abbreviated no-hitter, until 1991. 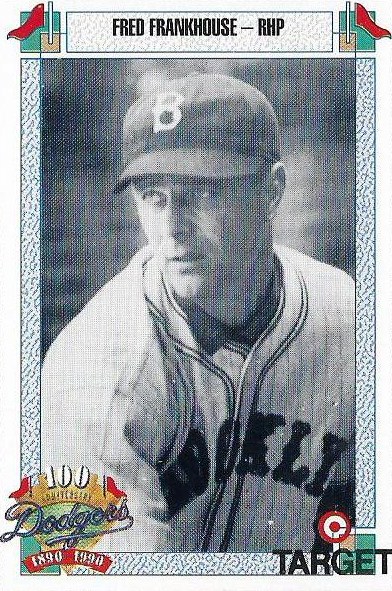 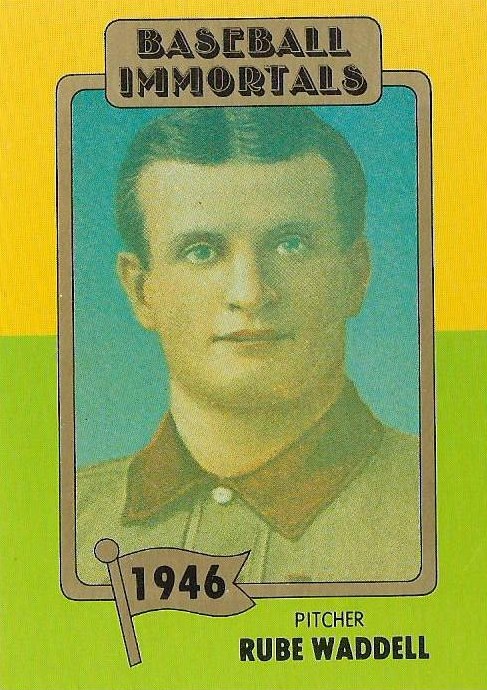 Rube Waddell, Aug. 15, 1905
Waddell is actually part of two different no-hit games that were scrapped in 1991. The game he started took place against the St. Louis Browns in Philadelphia. Waddell, throwing for the A's, allowed no hits for five innings and then rain stopped the game.
One year later Philadelphia's Jim Dygert started a game against the White Sox and threw three innings without allowing a hit. Waddell came in during the fourth inning and didn't allow a hit for the next two innings. The game was halted by rain and the A's won, 4-3. 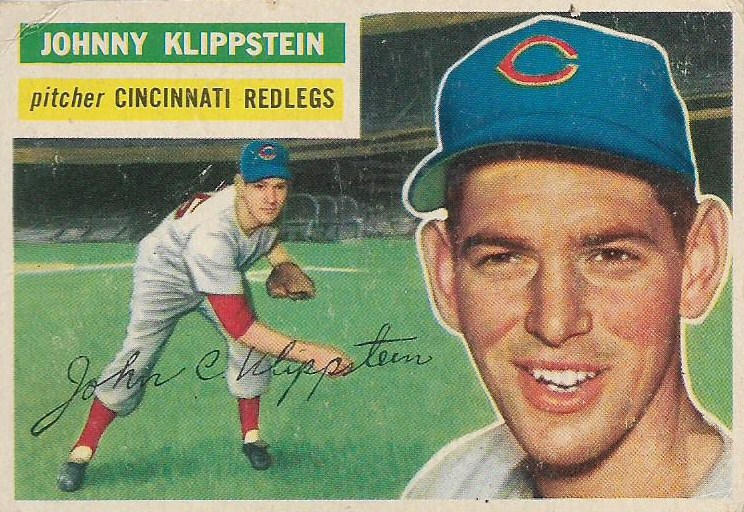 Johnny Klippstein, May 26, 1956
Klippstein pitched the first seven innings of a game for the Reds against the Braves, actually giving up a run in the second inning by hitting Hank Aaron, walking the next two batters and then allowing a sacrifice fly. The Reds tied the game in the top of the seventh inning.
Hersch Freeman replaced Klippstein in the eighth inning and did not allow a hit. Joe Black came in for the ninth and also did not allow a hit as the game entered extra innings.
But in the 10th inning, the Braves' Jack Dittmer hit a two-out double, ending the no-hitter. The Reds got out of the inning without allowing a run, but in the 11th, Hank Aaron tripled off Black and after two intentional walks, Joe Torre singled in the winning run for the Braves.
Some game! 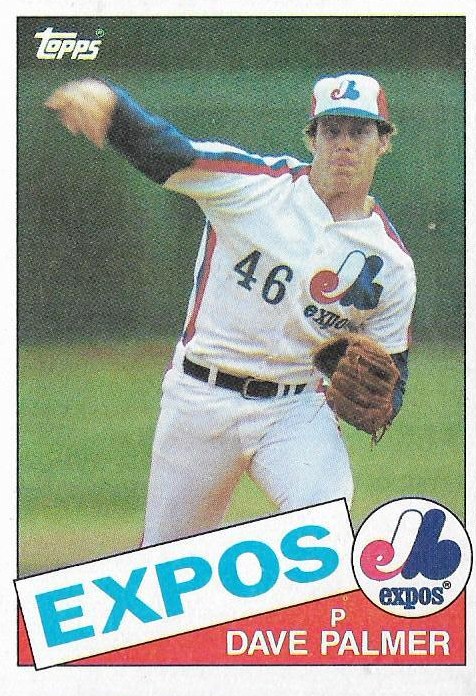 Dave Palmer, April 21, 1984
Palmer was throwing the first game of a doubleheader for the Expos against the Cardinals. He threw five perfect innings and then the rains came, giving Palmer a five-inning no-hitter that MLB recognized as official for seven years. 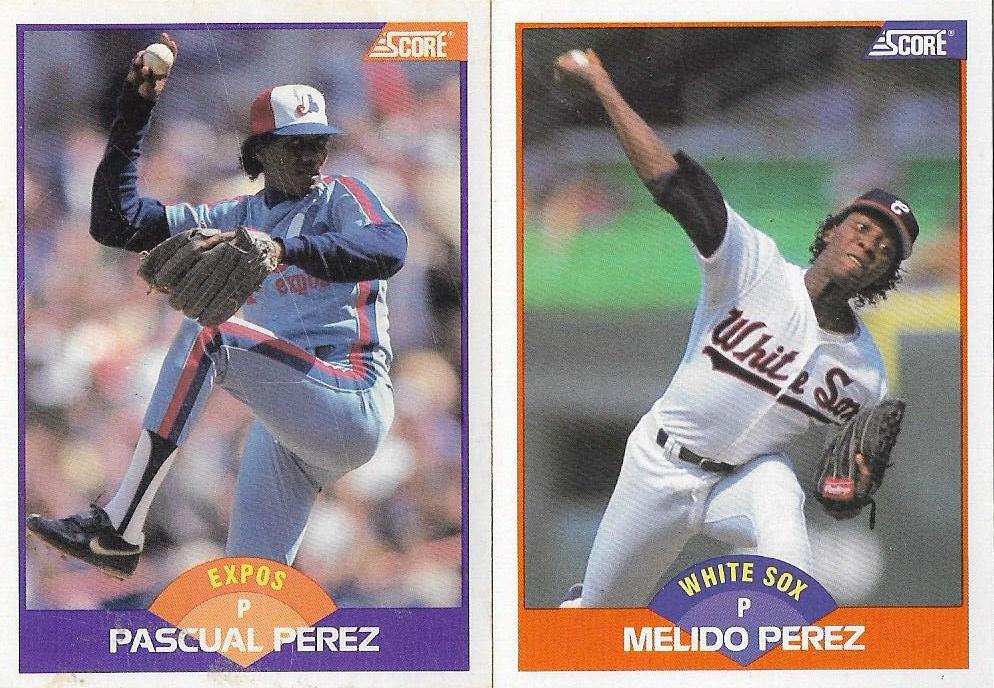 Pascual Perez, Sept. 24, 1988
Melido Perez, July 12, 1990
I believe the Perez brothers are the only brothers to each record official no-hitters only to have them stricken from the books.
Pascual Perez's shortened no-hitter came against the Phillies when he was pitching for the Expos. The game was called by rain, and the Expos were given a 1-0 victory.
Melido Perez threw six innings of no-hit ball against the Yankees before rain interrupted the game. The White Sox won the game 8-0 and Perez had an official no-hitter for a little more than a year. 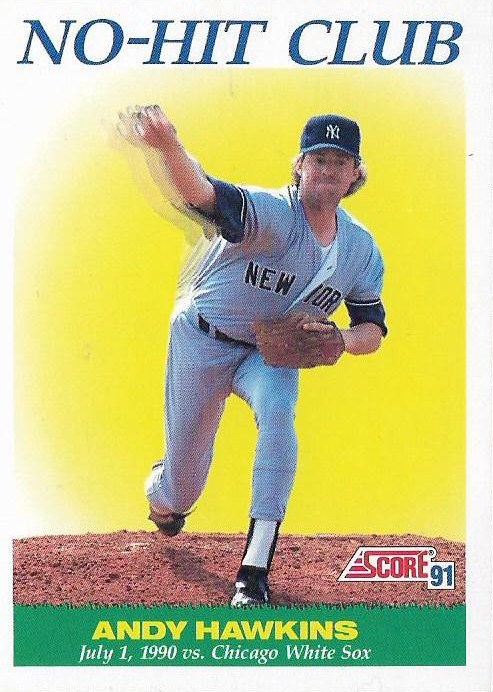 Andy Hawkins, July 1, 1990
Hawkins pitched the rarest of "no no-nos," one in which the away team is throwing a no-hitter but loses the game, which lasts just 8 1/2 innings because the home team didn't need to bat. This has happened just four times.
Hawkins threw a no-hitter against the White Sox for eight innings but gave up four runs, leading to one of the stranger boxscores featured on a baseball card. 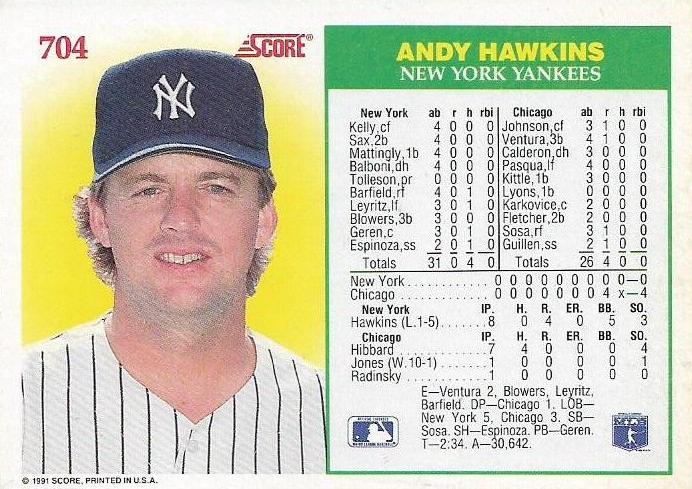 That's quite the pitching line. Eight innings, no hits, four runs (none earned).
All of the White Sox's runs came in the eighth inning after two outs. It was a disaster for the Yankees. Two walks and three errors led to four runs. Hawkins still had the no-hitter intact and kept that official no-hitter until the rule change a year later. 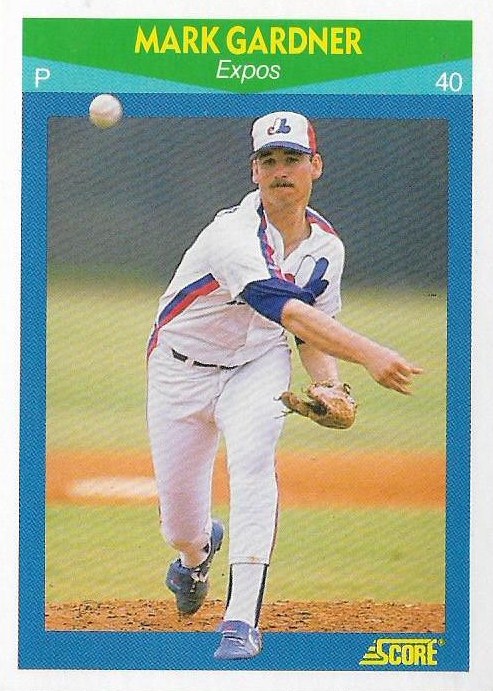 Mark Gardner, July 26, 1991
The Expos seem to have a lot of these no-hitters that weren't. Gardner pitched nine no-hit innings against the Dodgers, then gave up a lead-off single in the 10th. After surrendering another single, Jeff Fassero replaced him in relief. Fassero gave up the game-winning hit to Darryl Strawberry and the Dodgers won 1-0.
Gardner's no-hitter stood as an official no-hitter for less than two months before the new ruling.
There have been several cases since 1991 of pitching performances that would have qualified for no-hit status prior to 1991 but because of the rule change, they were simply a shortened game or an unfortunate turn of affairs.
In 1995, Pedro Martinez pitched nine perfect innings against the Padres for the Expos. He gave up a hit in the 10th inning and Mel Rojas replaced him to preserve the 1-0 victory. But Martinez never got credit for the no-hitter. 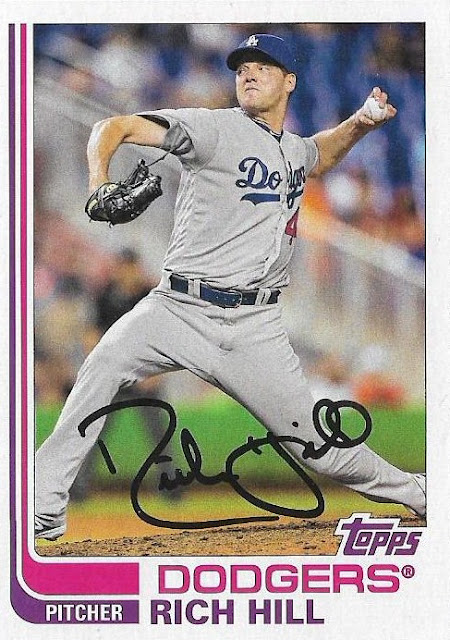 The most recent (and painful) case came in August 2017 when the Dodgers' Rich Hill took a no-hitter into the 10th inning against the Pirates in a 0-0 game. Hill gave up a game-winning home run to Josh Harrison in the 10th, which, obviously, ended the no-hitter. 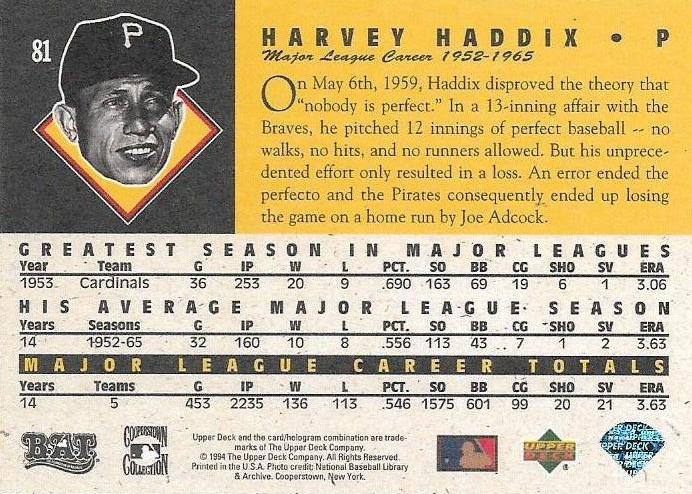 Hill never got to join Harvey Haddix in saying, "well, at least I still have an official no-hitter."

Brett Alan said…
If anyone hasn't heard the Baseball Project song "Harvey Haddix", which pleads for Haddix to again be credited with a perfect game, it's worth a listen. https://www.youtube.com/watch?v=amcg7A_-M-g The Baseball Project includes Peter Buck and Mike Mills of REM, and all their songs about about the history of baseball.
February 28, 2021 at 7:42 PM

This was such a odd rule change. Why did they do it. Baseball is so steeped in tradition.

But from the cards you showed, a lot of the no hitters erased occurred recent to that time. I wonder if the rule was put in because these no hitters were happening more and more (more teams and more games), thus cheapen them.

But also I wonder if money was a motivating factor - maybe these players because of the no hit - would be viewed to be more valuable at contract time.

Thus this could be one less achievement to recognize (ie used as a bargaining tool during contract negotiations)
February 28, 2021 at 9:37 PM

Fuji said…
Someone posted singles from the 1994 UD Heroes set on their blog last year (probably Jay or Dime Box Nick) and I went to eBay and bought one for my collection. I like the design and the player selection.

As for this post... it covers a very interesting topic. I don't usually feel sorry for Yankees fans, but that game against the White Sox had to sting.
March 1, 2021 at 12:13 AM

NPB Card Guy said…
I was at the Pascual Perez game. I remember thinking when they called the game it was a very anti-climatic no-hitter. The Philly local news station I watched that night said it shouldn't count as a no-hitter - not because it was only five innings but because it came against the 1988 Phillies who were pretty pathetic.

I was disappointed when MLB said it wasn't a no-hitter in 1991 but I saw Wilson Alvarez no hit the Orioles in Baltimore later that year so I still can say I saw one.
March 2, 2021 at 9:31 AM