'56 of the month: Harmon Killebrew 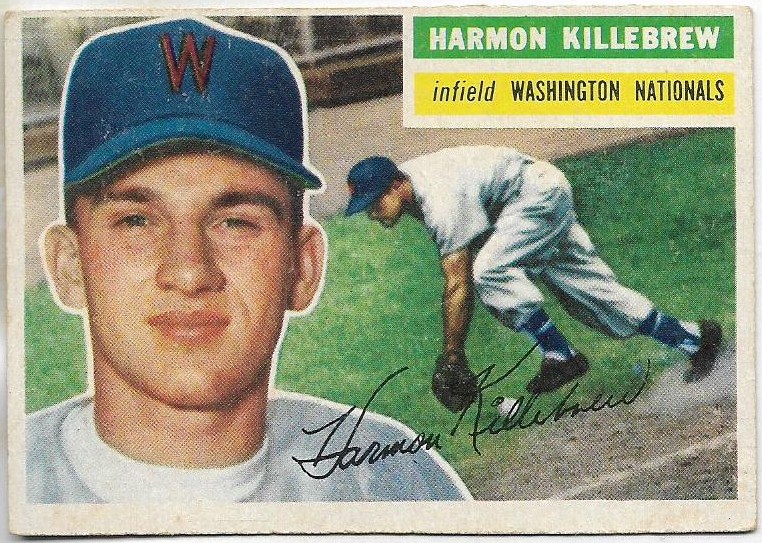 I pulled the trigger on this Harmon Killebrew second-year card a few weeks ago.
Not only is it a significant card because it's Killebrew, but it's notable because this is the card that gets me down to needing 10 more cards to complete the 1956 Topps set.
That's amazing to me. If you went back and found night owl when he was just starting this blog in 2008 and told him I'd be this close to finishing the set, you'd get a lecture on spewing nonsense.
But it isn't nonsense. Here is what's left that is not in my collection:
20 - Al Kaline
33 - Roberto Clemente
113 - Phil Rizzuto
121 - Pirates team card
130 - Willie Mays
135 - Mickey Mantle
194 - Monte Irvin
288 - Bob Cerv
292 - Luis Aparicio
324 - Rocky Bridges
OK, OK, I'm not as close as I seemed when you first started reading this. The Mays, Mantle and Clemente cards will take me a long time to retrieve and have probably gotten a lot harder to own now that a whole bunch of people have discovered baseball cards for the first time over the last six months.
But I will not be dissuaded. I have a few tricks up my sleeve, and as this blog has taught me time and time again, you're closer to your card goals than you think.
I also still need the two unnumbered checklists that come with this set. But I don't necessarily consider those must-haves and I'll probably end up finding some beat-to-death version of those checklists just to have them. 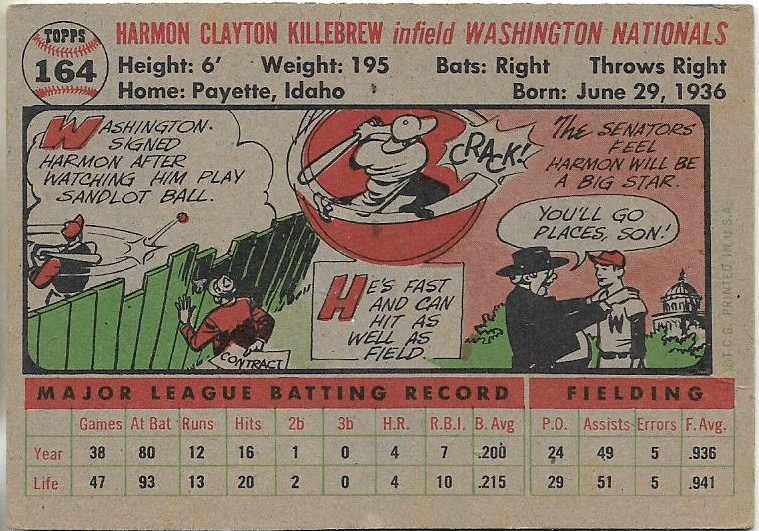 I love cards of superstar players when they were young, especially when all I ever knew of them was some old guy close to retirement.
That's what Killebrew was to me when I started collecting cards. I saw his 1975 Topps card the first year I collected and, man, he looked ancient to me.
So, seeing a card of a very young looking Killebrew does not compute. Neither do the stats on the back. What the heck? A career .215 batting average?
I also love the tone of the cartoons in which Topps seems to be desperate to convince the collector that, really, Killebrew is going to be a keeper some day. He can hit AND field! I guess they had to trust Topps. It's not like Killebrew's scouting reports were online for everyone to see.
Every '56 card I receive is a gift, even if I had to spend a fair amount to get it. The person who sent this to me included a hand-written thanks, mentioning me by name. And all I wanted to say is, "no, thank you, for providing me with this strange, weird, youthful Killebrew with a clearly made-up lifetime batting average.
Plenty of people probably saw this card and his stats and didn't believe that Killebrew would amount to anything. And there might be a person or two out there right now who believes I'll never land the Mantle or Clemente.
But the Killer and I will show them.

jacobmrley said…
Who does Bob Cerv think he is, wandering onto a list like that? At least Rocky Bridges has an awesome name like Rocky Bridges.
February 5, 2021 at 7:57 PM

Chris said…
Fantastic Killebrew! And I am very impressed that you're 10 cards away from completing this incredible set. Interestingly, the Rizzuto card was the very first '56 I received - long before I had ever thought completing the whole set was possible (I'm still not sure that it is; I've got about 160 cards to go lol.)
February 5, 2021 at 8:22 PM

Old Cards said…
Another nice looking 56. Only 10 more? Not bad! Killebrew was in his prime when I started following baseball. One of my favorite players. I am trying to run down a 64 Clemente at a somewhat reasonable price, but like you said, too many people collecting now.
February 5, 2021 at 9:10 PM

Swing And A Pop-up said…
That's awesome! I do hope you are able to obtain the ten cards you need. You are a lot closer to completing that set than me because I need like...all of them.
February 5, 2021 at 9:25 PM

kcjays said…
Fabulous card!
Killebrew’s final year playing, 1975, was with the Royals. I had the opportunity in 2003? to get his autograph and chat with him about playing for the Royals. He told me he actually signed a 2 year deal with the Royals because he thought they were on the cusp of becoming a great team. According to Mr. Killebrew the artificial turf was too hard on his knees so he retired after the 75 season instead of playing another year. I would have loved to have been able to get a Topps card of him in a Royals uniform.
What a nice gentleman!
February 6, 2021 at 12:35 AM

Jon said…
If they're not needed for paying bills or any other essential items, it seems like some of those Beckett checks could cover a few cards off of that want list (assuming that they're giving you more than a pat on the back to write for them).
February 6, 2021 at 8:21 AM