One-third of the cash, all of the fun 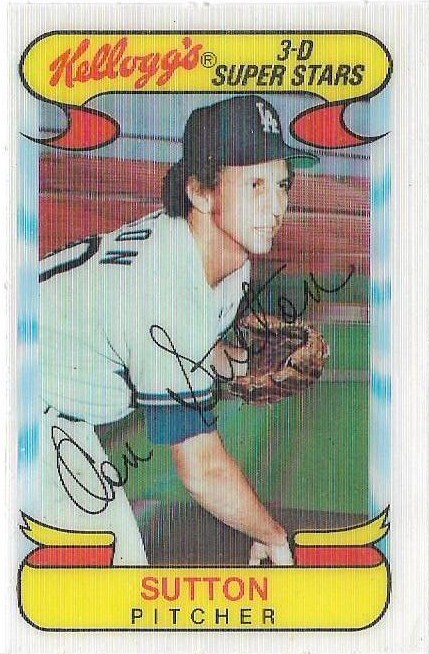 As I've mentioned a number of times, I devote two-thirds of the money I receive for magazine writing to savings.
Working for a newspaper doesn't generate enough funds to even match a teacher's salary, so that cash comes in handy for real-life costs.
The other third goes toward cards and those funds in the last couple of years have boosted my collecting in a significant way.
You saw probably the flashiest card that I bought with my most recent article earnings, the 1956 Harmon Killebrew. But there were other cards that I bought with those latest funds, too. 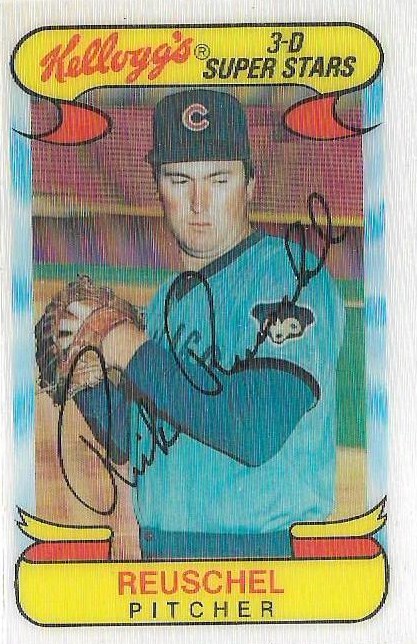 I moved closer to completing the 1978 Kellogg's set with a selection of six more cards from the set. With these latest cards I'm down to needing just four more cards to finish it.
Those last few cards are Eddie Murray, Larry Bowa, Tommy John and Dave Parker. I have both Murray and Bowa in my cart right now. And I'm sure I'll track down John and Parker in no time.
But enough about the stragglers. This post is about what I GOT. 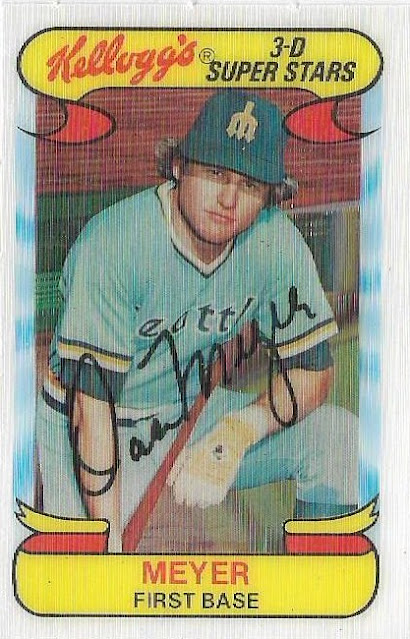 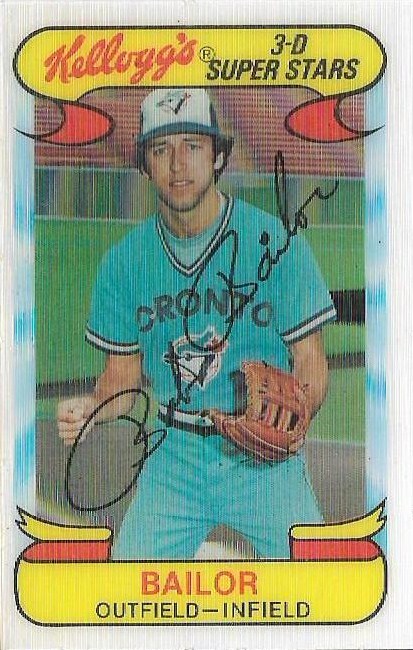 Here are the first Blue Jays and Mariners to appear on Kellogg's 3-D cards. That's how you knew you made it as an expansion club. Forget those Topps cards, were you being retrieved out of a cereal box?? 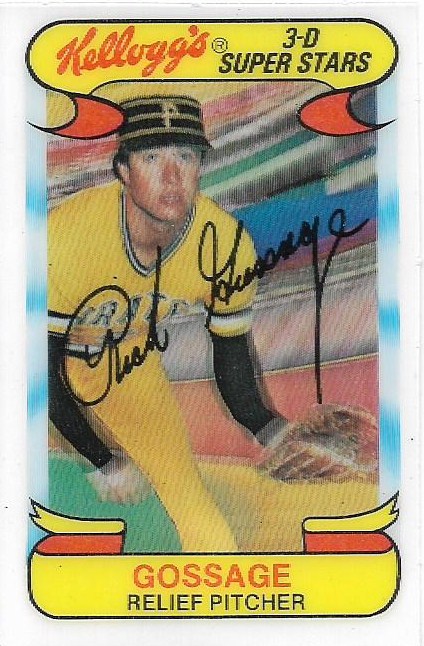 I've purchased this Gossage card before. It made the Greatest Cards of the 1970s countdown on the occasion of it being one of the very few cards to show Gossage in an actual Pittsburgh Pirates uniform.
Then the card, as it sat unwittingly in a binder, mysteriously cracked -- always a possibility with those 3-D cards. I've since housed all my '70s Kellogg's cards in toploaders only, and that seems to have erased cracking issues. And that's where the new Gossage will go. 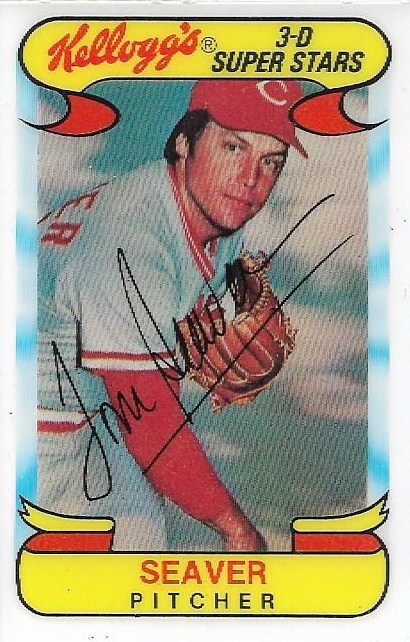 Lastly, the late great Tom Seaver, to go with the late great Don Sutton at the top of the post. Man, losing dominant pitchers of my childhood is still heart-wrenching. I want everyone to keep an eye on Vida Blue, Frank Tanana and Steve Carlton and, of course, Nolan Ryan.
Per usual, I need to spread out my cash on the wide-variety of collection pursuits that I have. So the last card I'm showing has nothing to do with mid-1970s food issues. 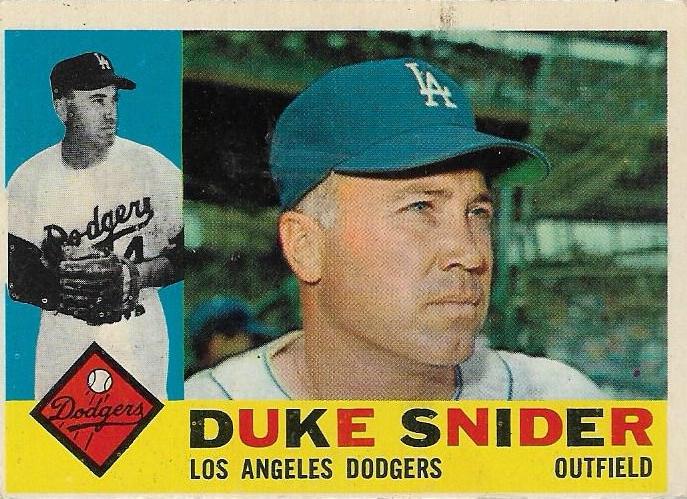 Swing And A Pop-up said…
Very, very cool. That Dan Meyer is the only Kellogg's card I remember actually getting out of a cereal box.
February 9, 2021 at 8:04 PM

John Bateman said…
I'm 55, but why does Duke Snider look 56 (or older than me on his card). Why do Baseball (and football and Hockey Players) from the 1950s or 1960s or at least older than me - always seem to look a lot older than their stated age. I think of a 72 Topps Killebrew where Harmon looks like he is 59 years old, not 37.

Then the players who are younger than me, like Tom Brady, look even younger than there age. Brady looks like he is in his early 30s.
February 9, 2021 at 8:41 PM

bbcardz said…
Love the design of '78 Kellogg's, especially the easy-to-read player autographs. Congrats on some great pickups!
February 9, 2021 at 8:45 PM

Jeremya1um said…
I’m sure it will have close to 40 Dodgers this year.
I can’t believe Arozarena didn’t get a card in Series 1. Was also hoping for World Series highlight cards for every game, but I guess I will have to look for them in Heritage. Hopefully Heritage doesn’t have a ton of Dodger SPs. If you are doing the set again this year, I’ll try to help you out.
February 9, 2021 at 9:29 PM

Johnnys Trading Spot said…
Congrats again on the recent article. I know what you mean about the 1960 Topps set. The Braves had 36 cards. I completed mine, which wasn't easy with 2 Aaron's, Span's, and Mathews each because of the leaders cards. Go get that last one.
February 9, 2021 at 10:08 PM

Fuji said…
Parker and Murray were two of the final cards I needed as well. I checked my extra 78's for the Tommy John, but it must have been one of the ones missing from the partial set I purchased.

I'm pretty sure I learned about Gossage playing on the Pirates after seeing someone blog about that card. Didn't realize he only has two playing days cards featuring him with the Bucs: the Kellogg's and a Hostess. Pretty sure I learned that from someone's comments on a blog out there.
February 10, 2021 at 12:33 AM

Chris said…
37 Dodger cards in one set sounds like a lot in any era. I can't wait to see you track down Tommy Davis so we can see them all together.

I wonder if kids who pulled Meyer and Bailor out of cereal boxes in the late '70s were disappointed or just confused - like who are these guys?
February 10, 2021 at 8:08 AM

Shlabotnik Report said…
I'm surprised that there weren't more Dodgers in the 1972 set, but I went back and saw that only a couple of teams had ginourmous 1972 team sets while most teams log in at around 30 cards.

I love early cards for the Jays and Mariners. I should make those oddballs more of a priority, and if I do this you'll get credit for spurring my 374th different collecting strategy.
February 10, 2021 at 8:39 AM