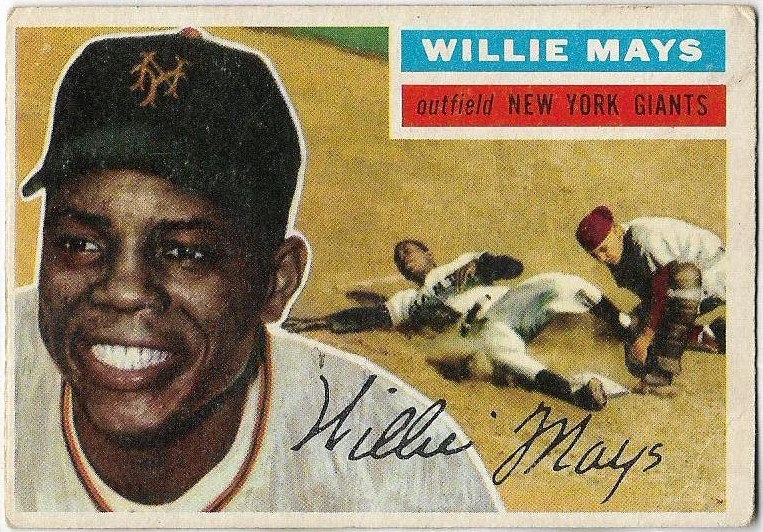 One of the most significant cards in my collecting history arrived at my door today.
The 1956 Topps Willie Mays card ties my formative collecting days to my current collecting existence, confirms what I believe in in this hobby, and realizes dreams from long ago I never thought possible.
It also sets a couple of personal records.
It is the most I've ever spent on a single card. Yet it didn't hurt my wallet nor cause any regret. In terms of a cardboard acquisition it is about as perfect as it gets. No guilt. All power and beauty.
It removes a considerable road block in my quest to complete the 1956 Topps set. It was one of the Big Three that I fretted over for years. "How would I ever obtain that card?" And now it's here.
I don't have to remind you that baseball legends from the 1950s (and '60s and '70s) are departing at a rapid pace. That wasn't a top consideration in landing this card. But with Willie's age (he will be 90 in May) and the way the hobby has been in the last year, it's a relief to own this card when I do.
In terms of condition, it is also the perfect specimen for me. Not only do the rounded corners, slight marks, creases and off-centered-ness scare away the PSA crowd, but it kept the price in my range and it eliminates any counterfeiting concerns in the back of my brain.
Plus, it just looks like a card from the '50s SHOULD look. I am not crazy about pristine, sharp-cornered cards from that decade. Sure, I'd take one. But not only is the "is this fake?" radar high when I see a '50s card that hasn't been molested in the slightest, but it just doesn't look natural for a card from a period in which "preserving your investment" wasn't a thought in any card collector's mind.
This satisfies my need for a Mays card that has a solid appearance but also looks realistic. "VG" is the perfect rating for my '56 cards.
Like many Topps cards from the mid-1950s, Mays' head shot on this card is a repeat of his appearance in the 1954 and 1955 sets. What separates this one from those two earlier cards is the exciting play-at-the-plate action scene.
The image appears to be from this play, Blogger, SABR member and Giants fan Nick enlightened me on that. 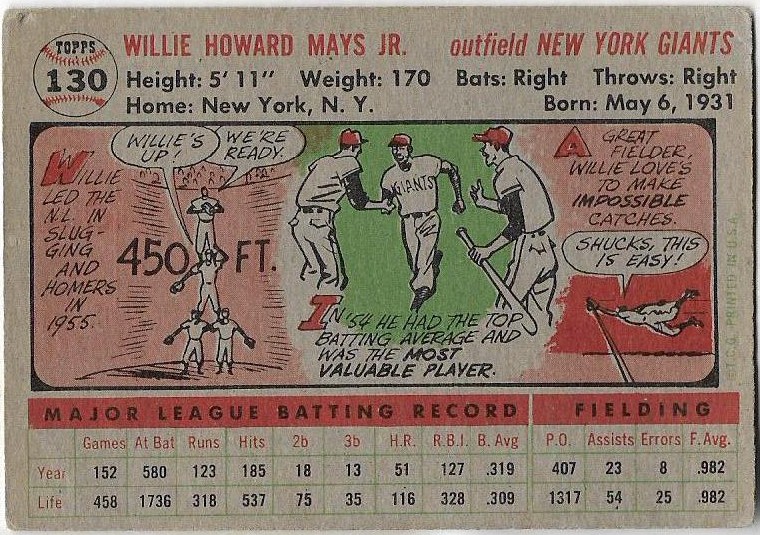 Card backs for legendary players are such a kick. A few observations:
1. I had no idea Mays was a Junior.
2. The fielders must be in Fenway Park in that first cartoon. Who else has a wall that tall?
3. You get a good indication of what observers thought of Mays' fielding skills at the time with the use of the word "impossible."
4. Check out those stats from 1955. Mays finished FOURTH in NL MVP voting. His numbers were better than anyone who finished above him, winner Roy Campanella, as well as Duke Snider (2nd) and Ernie Banks (3rd).
There was some minor angst with obtaining this card. It was scheduled to arrive a week ago Tuesday. But then the storm hit Texas and other southern states the weekend prior. Even though my card was coming from Arizona, I waited, and waited and waited as it sat in Phoenix for more than a week.
If it wasn't for the storm, I'd be concerned. But, yesterday, the post office informed me the card was magically in my state (from Phoenix to New York in one, fell swoop?). I knew everything would be OK.
And everything is OK.
It's perfect really. Mays wore number 24. This card arrived on Feb. 24.
I was looking through a baseball card checklist book from the early 1990s the other day. I turned to the page on 1956 Topps. I hadn't updated the checklist since I bought the book. The only boxes checked were for the '56 cards that I had received when my dad brought home that shopping bag full of them back in the early '80s.
I owned 114 of them then. And that total stayed the same for two decades. Now I have 331.
The Mays card brings my want list under double digits. I need nine cards now. Yes, yes, two are Mantle and Clemente.
But you saw my Mays card, right?

Nachos Grande said…
Love it! Gorgeous card and you are right, condition isn't everything!

Also, if you missed last night's Breaker's Club video you might want to check it out. I think you'll be pleased with my Dodger pulling ability.
February 24, 2021 at 8:08 PM

Angus said…
What a great purchase! Congratulations on finally finding and buying it!
February 24, 2021 at 8:11 PM

Old Cards said…
Great card and great article. I have followed Willie Mays' career since I was a kid and never realized he was a Junior. I will be looking a little closer at the backs of my Mays' cards from the 60's. I am with you completely on the condition of cards this age. Soft corners, slight marks, creases and off-centered sounds perfect! Congrats on landing your 56 Mays!
February 24, 2021 at 8:22 PM

Swing And A Pop-up said…
This post is a perfect example of why it's much more fun to hang out on the blogs as opposed to the forums.
February 24, 2021 at 9:03 PM

Nick Vossbrink said…
A beauty. Congratulations. You're right about the inevitable bump. I'm in no rush though. Mays cards aren't going anywhere.
February 24, 2021 at 11:22 PM

Mike the History Teacher said…
Congratulations on a great acquisition! I'm looking forward to one day reading your post after you complete the set.
February 24, 2021 at 11:22 PM

Fuji said…
From front to back... that's a beautiful card. Congratulations on crossing this biggie off of your wantlist.
February 25, 2021 at 12:18 AM

bbcardz said…
Congrats on acquiring the '56 Mays card. Gotta love when you get so close to completing a significant set. (You are aware Mays was a Giant, right?)
February 25, 2021 at 1:52 AM

hiflew said…
Congrats on the Mays. And here I sit wondering if I should really spend that $4 to get the needed Bruce Sutter rookie for my 77 set. I suck at vintage collecting.
February 25, 2021 at 3:17 AM

Chris said…
Fantastic card, and a good reminder that I really need to get on the ball about getting a Mays for my own '56 rebuild.

Billy Kingsley said…
Congratulations, that is a great card. I agree with you on condition. It's not pack fresh but I see no real flaws, just a well loved card. That's about the condition I go for on vintage as well.
February 25, 2021 at 8:09 AM

Bo said…
Fantastic card. I was watching an old Yankee game on YouTube the other day, and they showed a diving catch Mays made in an Old-Timers Game at Yankee Stadium in 1985, at 54 years old.

Jon said…
It's sad that we as collectors have to consider how much cards of certain people will go up if they pass away. I mean cards of recently passed star players have always gone up immediately after, but historically don't stay high for very long. Currently though, if someone's stuff goes up, it stays up, and will continue to stay up for as long as this new normal lasts.

Daniel Wilson said…
Fantastic card! I didn’t realize he was a Jr. either. Congrats and best of luck finishing the set!
February 26, 2021 at 8:57 AM

Jafronius said…
Belated congratulations on the Mays acquisition!
March 11, 2021 at 11:34 AM