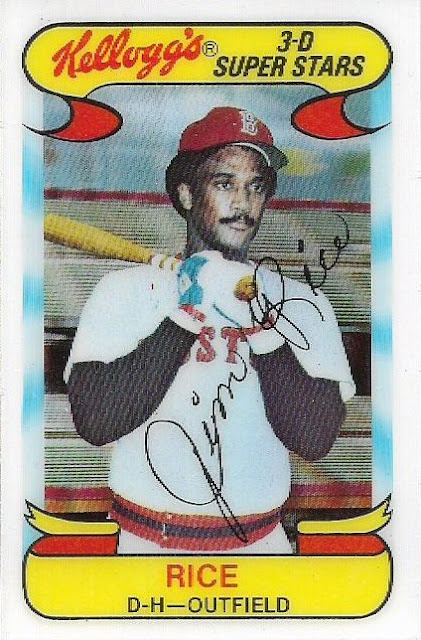 Even though it's clear to me that I'm enjoying the hobby more this year and being much more productive as far as my collecting is concerned, I still need convincing.
I've collected by buying packs at the store closest to me since I was a wee owl 45 years ago. It's a habit that's been difficult to break when that's all you've known as the Way To Collect.
But now that card aisles remain vacant, I keep coming up with good reasons why regular pack purchasing is pretty pointless.
Earlier today, while continuing to sort through all of my Dodgers dupes, I noticed again how rookies overrun Topps products. My dupes from the last 10 years were absolutely saturated with rookies that are now long forgotten, even if the product is only a couple of years old. Players like Zach Lee, Trayce Thompson and Alex Guerrero dominated my recent doubles. People can't wait to get rid of these sudden no-names. And when you look back on that product from three years ago, you realize how irrelevant it became. Rob Segedin? Why did he need to be in 2017 Archives?
So, I'm not missing anything by not being able to scoop Chrome or Update or Fire off the store shelf. It's all filled with rookies who will turn out to be castaways three years from now.
The thrill of pack-opening may still be a leading reason why I'm in this hobby, but it's nice to experience what it means to get the cards I want the most. This year has been good for that.
The last week or so, cards have been arriving at the nest thanks to cash I've received from redirecting those blaster buys and also from my latest magazine article. Exactly one card from 2020 was part of that "free cash" binge. 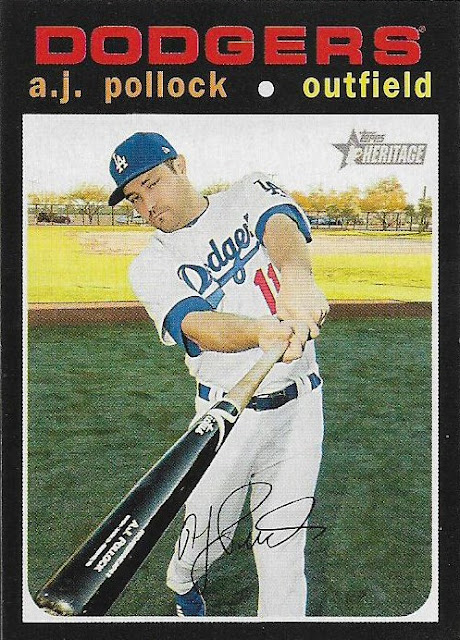 Here it is. That's the final card needed to finish the Dodgers team set for 2020 Heritage. Yes, it's a short-print. It's the only reason I don't have 5 or 6 Heritage A.J. Pollocks by now.
With 2020 out of the way, now let's see what really appealed to me. 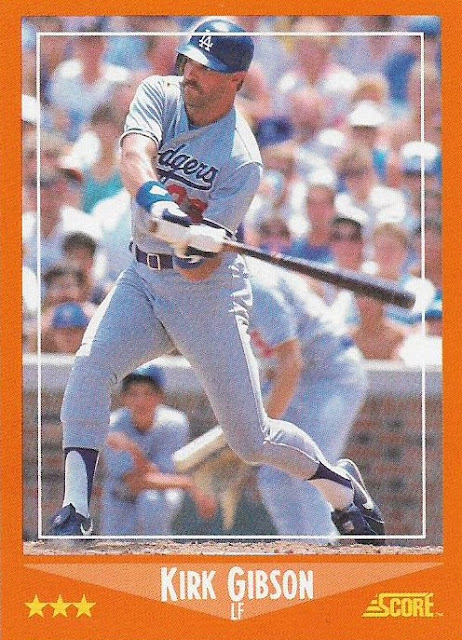 All right, still not in heart-and-soul WAAAANT territory. But getting that Kirk Gibson '88 Score Update card that I thought for sure I had already was absolutely necessary. 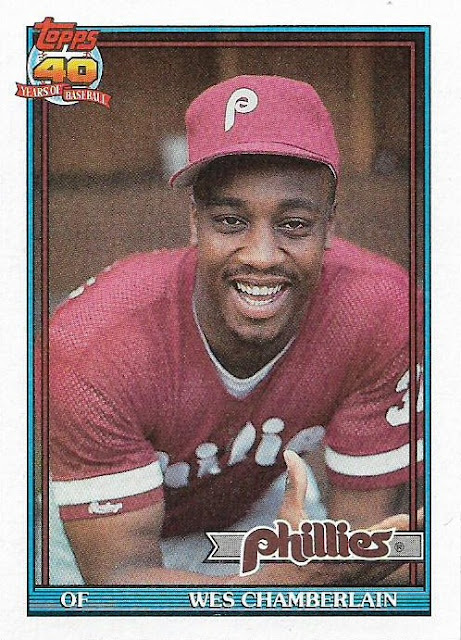 Still in junk wax territory and still very necessary. The non-error 1991 Topps Wes Chamberlain card has eluded my collection through decades of indifference. Louie Meadows WAS Wes Chamberlain as far as I was concerned in '91 and my incorrect thinking took a long time to disassemble. 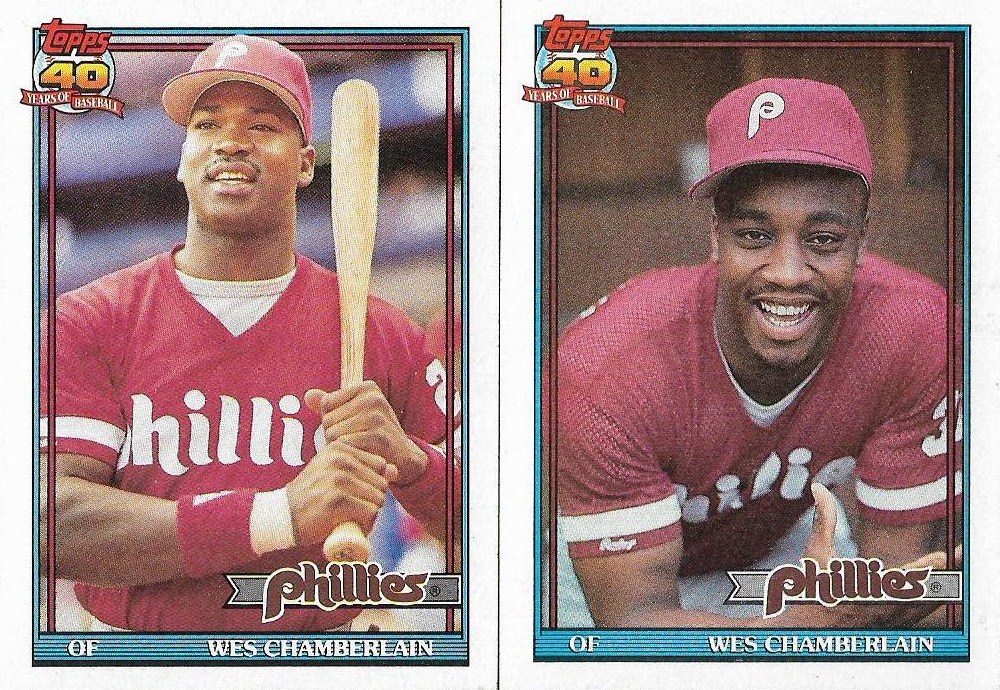 There they are together. Definitely NOT the same guy, Topps.
I'll get out of the late '80s/early '90s in a minute but just one more card that was one of the more difficult wants from this period for much too long. 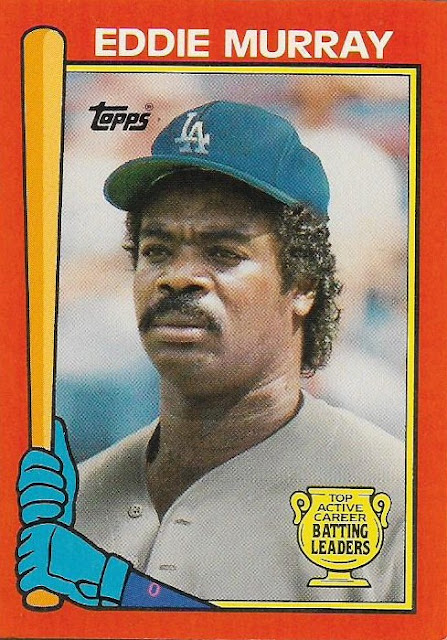 These Topps Career Batting Leaders cards from 1989/90, which were only issued in rack packs sold at Kmart, are difficult to find. I gained the 1990 one (green border) two years ago. Now I have the red border Steady Eddie with the over-the-top airbrushed hat.
This card didn't cost as much as I thought it would, given that I've searched for the 1989 card often and mostly come up with other cards in the set but not Murray. This card alone is worth several 2020 packs to me.
Let's move away from overproduction central and I'll show you the other pesky card I nabbed. 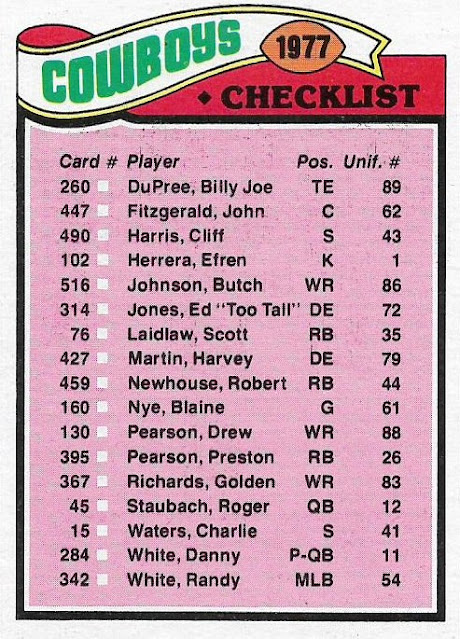 A lot of agonizing over this. I need to pay THAT MUCH for a checklist? This happens a lot in the vintage hobby. But it became apparent that this is what I had to do if I wanted to complete the 1977 Topps football set.
I'm still waiting for the other two needs from that set to call it complete. I'll have a tribute post to that set when I do. Expect all the exclamation points. 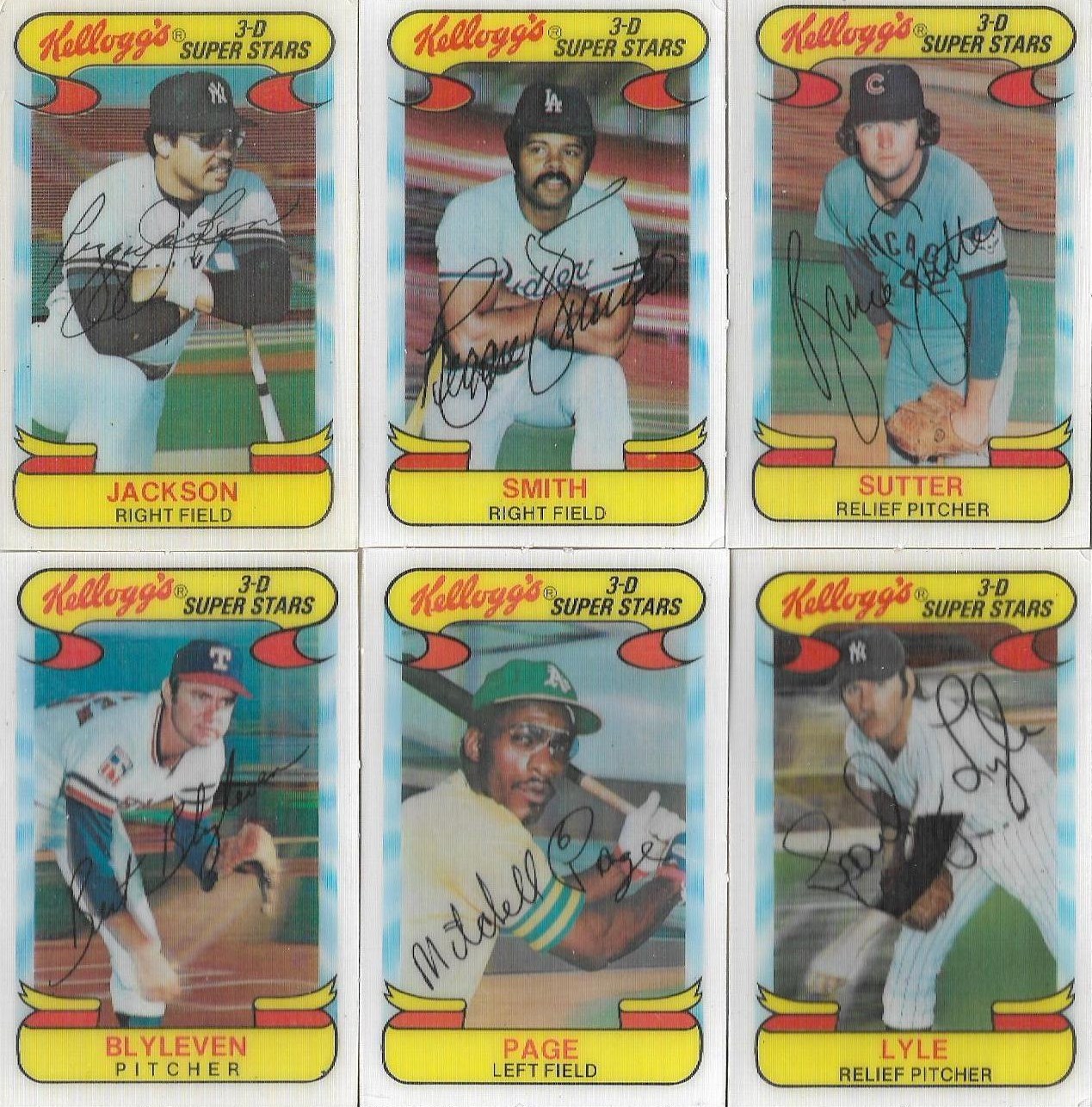 Staying in the '70s with the latest 1978 Kellogg's pick-ups!
This set is SO MUCH FUN! Just about the most collecting fun I've had this year is accumulating Kellogg's cards. I expect that to continue next year. There's no way I'll be done with the '78 Kellogg's set in 2020. So I'll be finishing that and then tackling 1979 and 1980 and probably dabbling in 1975.
The biggie in this assortment is non-Dodger Reggie. There are still a few heavyweights left, Rose, Ryan and Eddie Murray. 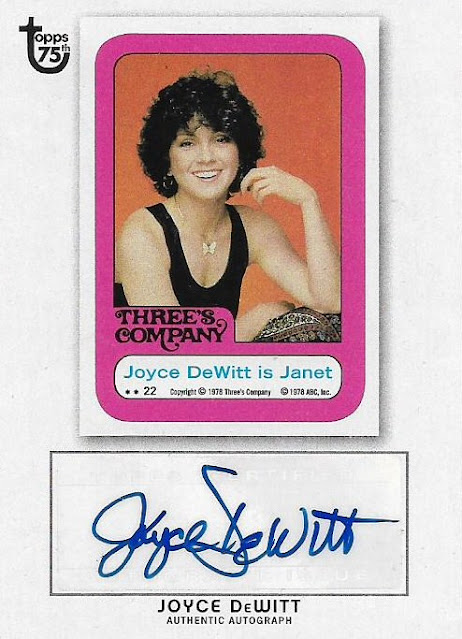 One more '70s fans. It's Janet!
I saw this card on the Sport Card Collectors site and I was super-jealous. I admittedly had a crush on Joyce DeWitt as a 13-year-old and watched Three's Company as often as I could sneak in a viewing.
DeWitt signed at a show I went to about 10 years ago and I mentioned it on the blog. I didn't bother to get her autograph then -- I wanted my money to go strictly to cards -- and it was a mistake. This helps me forget that.
Finally, going back to the '50s for the remaining purchases. 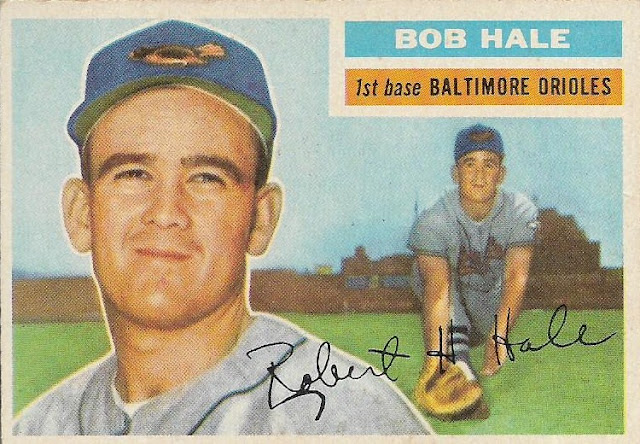 I grabbed the Bob Hale because it's one of the few "no-name" players from the 1956 set that I need. There are so few cheapies left now. And look how sharp it is.
But the crowning achievement are the following cards: 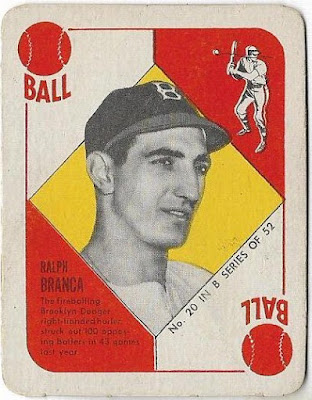 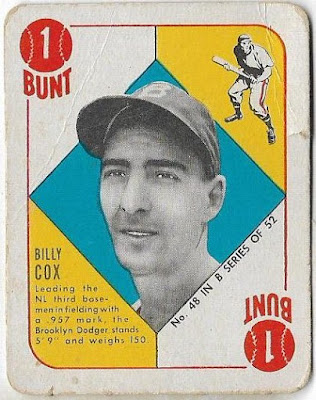 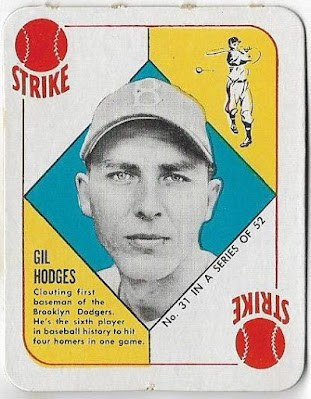 They are the last three Dodgers from the 1951 Topps set that I needed to finish it off.
I went on a mission to grab all the blue backs from the Dodgers, beginning a couple of months ago. For as long as I've been collecting I've been reminded that the blue backs are much rarer than the red backs. I used to dream about the day I would own a blue back.
Well I have three of them now and actually the last card I needed was the red back Gil Hodges!
And now I can do this! 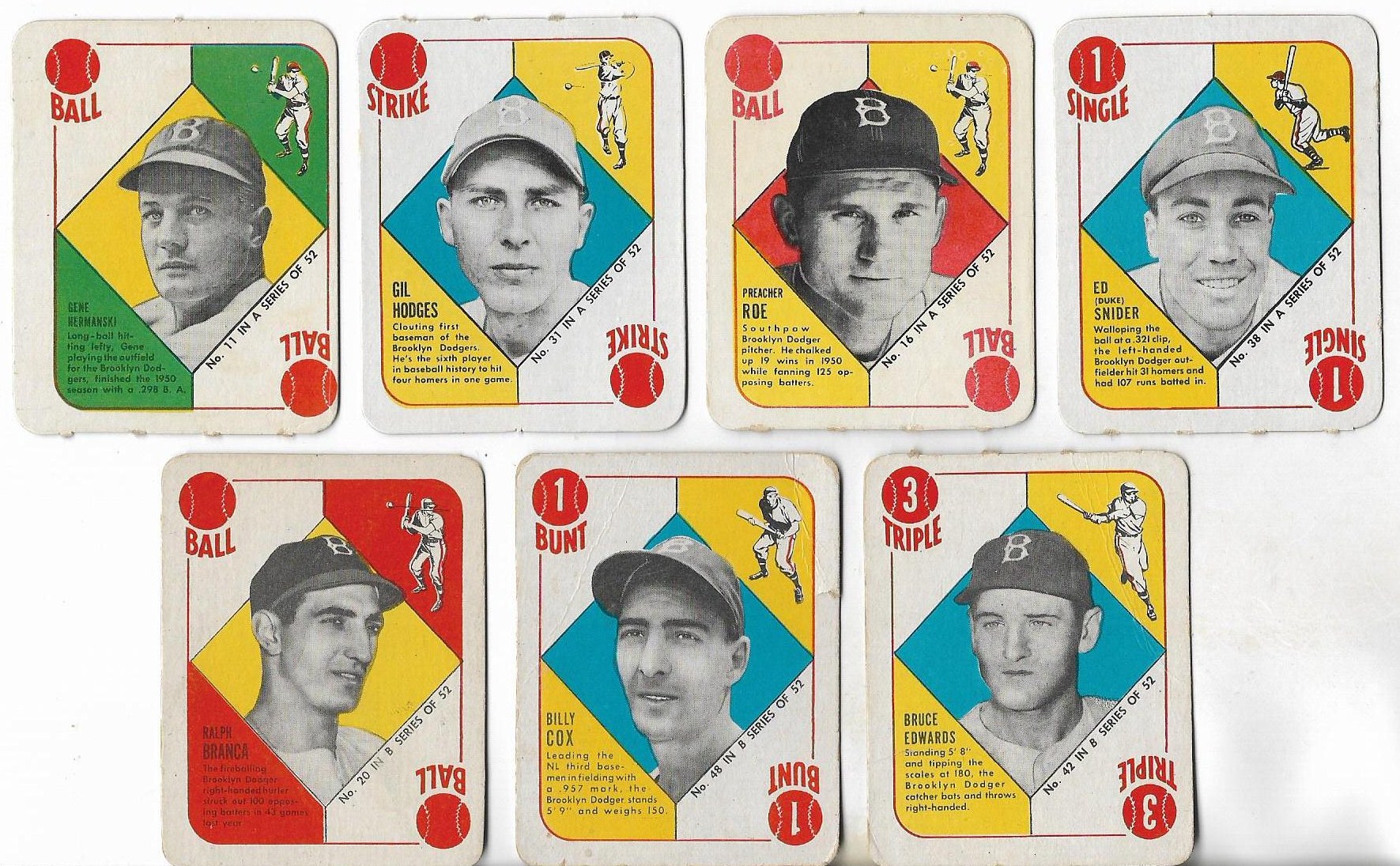 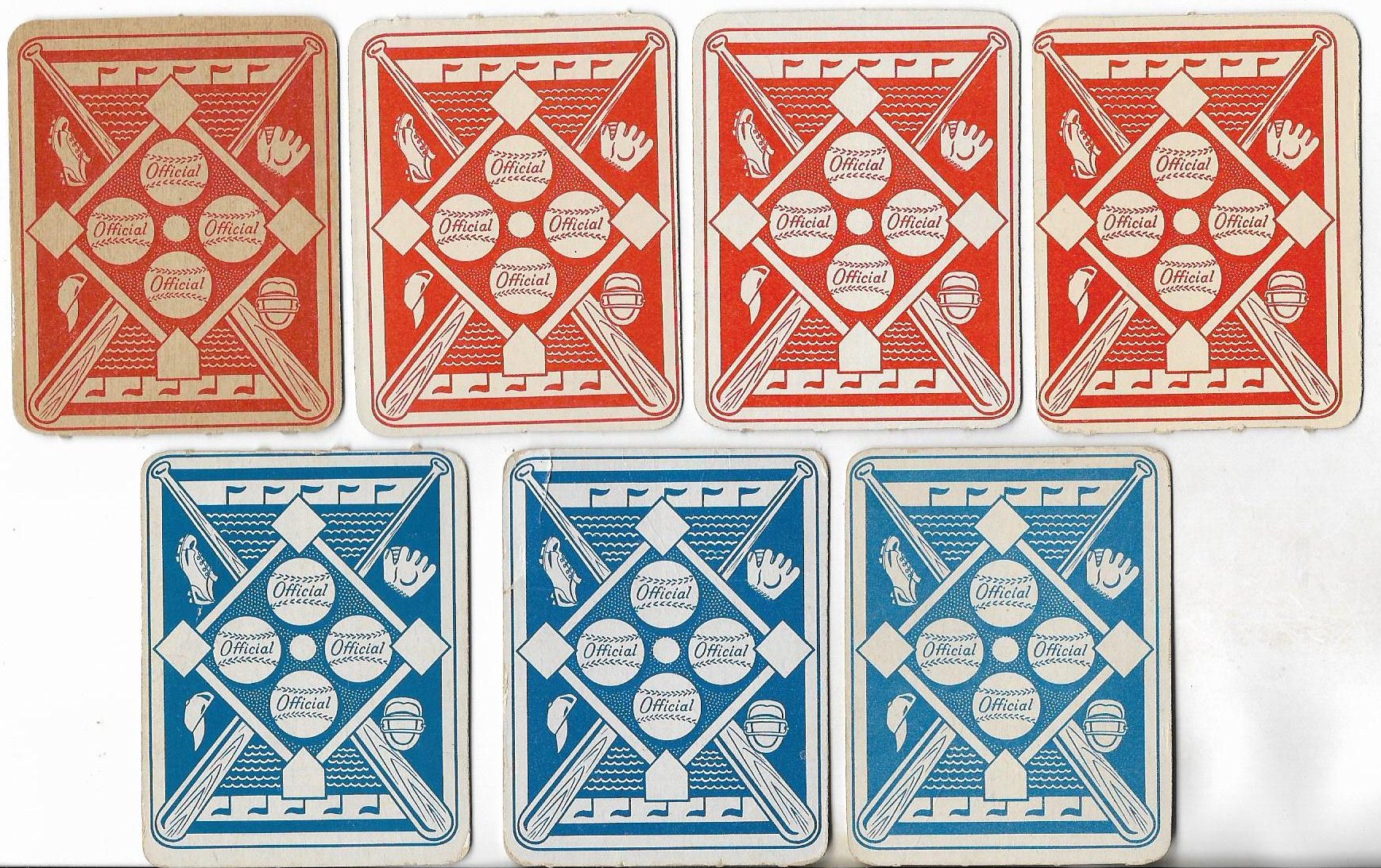 I'm one of those collectors who think the '51 Topps set is super-underrated. It gets ignored by everyone, even Topps ignores it all the time and makes believe that it didn't start issuing cards until 1952. (Heck, I skipped it when I did the all-time Topps countdown five years ago. What was wrong with me?)
But I don't care about the people who say it's not a legitimate set. I like the look. I like how tidy the cards are and that the checklist isn't overblown.
And that's what I'm buying when I'm not buying cards at Walmart or Target.
So, flippers, you just keep doing what you're doing.
Just stay way from the stuff I really like.

Peter K Steinberg said…
So happy to see you getting the cards you want and sorting through the cards you don't. Bravo! Merry holidays.
December 4, 2020 at 8:39 PM

acrackedbat said…
Yes, an impressive lot of gorgeous cardboard here. As a darker-haired gal, I more impressed you liked DeWitt over Somers! Joyce didn't get the press and attention Suzanne drew.
December 4, 2020 at 9:06 PM

Matt said…
I am with you, I am enjoying what I have and the hobby even more so this year than ever before. VEry appreciative what I am able to pick up. THough that retail itch does come into effect. But I am training myself it's okay not to rip
December 5, 2020 at 8:22 AM

RunForeKelloggs said…
As kids we always chased 1951s since we knew they were the first set by Topps. Never did find lots of blue backs.
December 6, 2020 at 10:36 AM

gregory said…
I'm looking forward to your post on the completed 1977 Topps Football set. Maybe you can get Joyce DeWitt to present some of the cards ;-)
December 6, 2020 at 3:46 PM

Jon said…
Other than the occasional Dollar Tree packs (which are gotten for blog purposes only of course), I almost never even consider buying newer packs. A) The designs rarely appeal to me, and B) Even if they did, one look at those pack/box prices is enough to send me along on my merry (empty-handed) way.
December 7, 2020 at 7:25 PM

mr haverkamp said…
I'm struggling with the last few 1977 FB team checklists (unmarked) for my set too. Thanks for the 1991 Louie Meadows photo, did not know I needed it for my set....must have been focusing on Fleer that year!
December 8, 2020 at 8:25 PM