At least someone had a good year 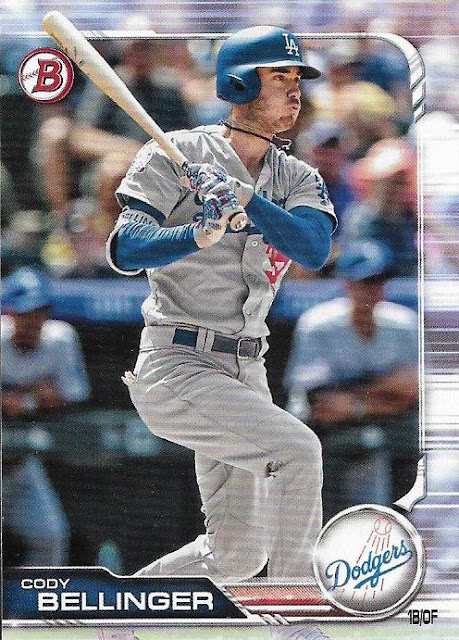 We're in the final month of 2020 and already I'm sick of the "hang on, one more month" online memes and sentiments. I'm not against encouragement, but has it ever rang so hollow?
It's just numbers, you guys. It don't mean anything. That big, electric ball they drop in Times Square each year (well, most years) just moves the fourth digit up one. We'll still be dealing with the same crap in January 2021.
Actually, I've had worse years. It's all relative, of course. But if you asked me to choose between 2020 and 2019, I would say, "can't it be something other than those two years?" And then I'd say, "2020." 2019 was a disaster for me. That's the closest I've come to a nervous breakdown. I never want to go back to 2019.
And, in 2020, my favorite team won the world championship. That's a place I get to go when someone says, "find something happy in 2020 to talk about." The Dodgers won the World Series! It's a nice respite from all the 2020 stuff. My brain can take a break and remember happy blue thoughts.
Some players will say the same thing. 2020 was a pretty good year for Mookie Betts. He won a World Series in his first year with a new team and he's got a big, fat, long-term contract. He also guaranteed he will be in a doozillion insert sets in 2021.
Most of his cards in 2020 show him photoshopped into a Dodgers uniform. I think all except a couple of the 17 Dodger Mookies that I have now feature a photoshopped Betts. 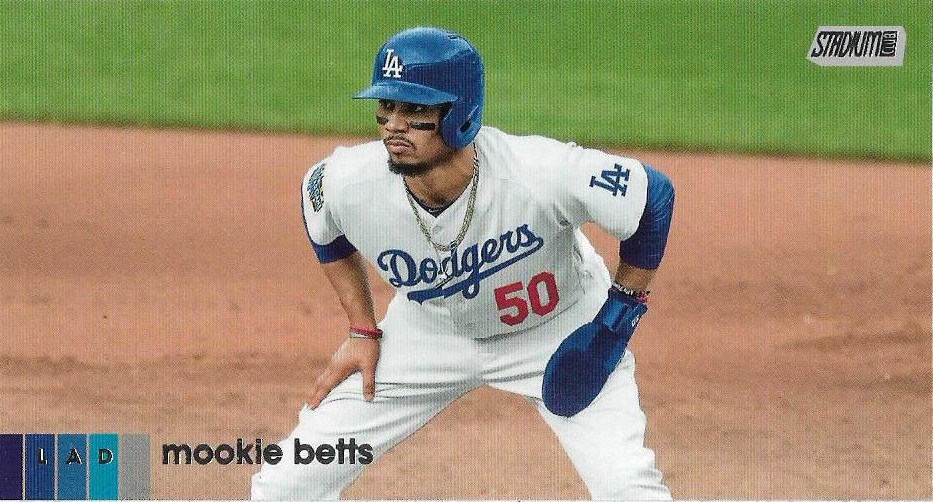 This one is a pretty good shop job. If you view it up close, you an tell it's been altered.
This is one of the widevision boxtoppers from this year's Stadium Club. I received it from Jeff of 2x3 Heroes. (The card is 2 1/2-by-4 3/4). He's sent out a whole bunch of "catching up" cards lately. He even sent this same widevision card to Jim at cards as I see them. Is he stockpiling Betts boxtoppers? 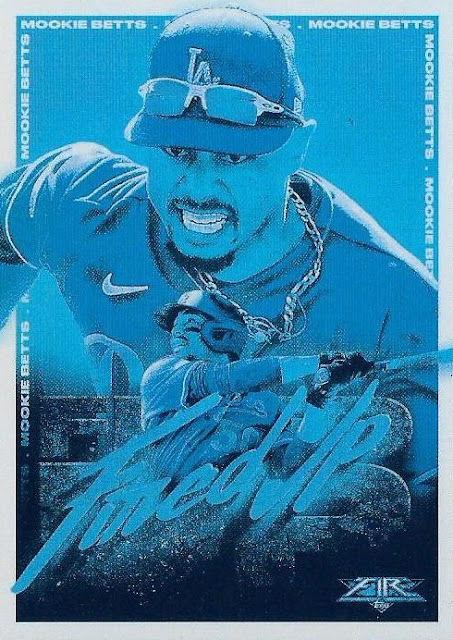 Here is another great Betts card. It's the blue foil version (or whatever they're calling them) of the Fired-Up insert in this year's Fire, one of the many 2020 sets I'm woefully low on thanks to the flippers. 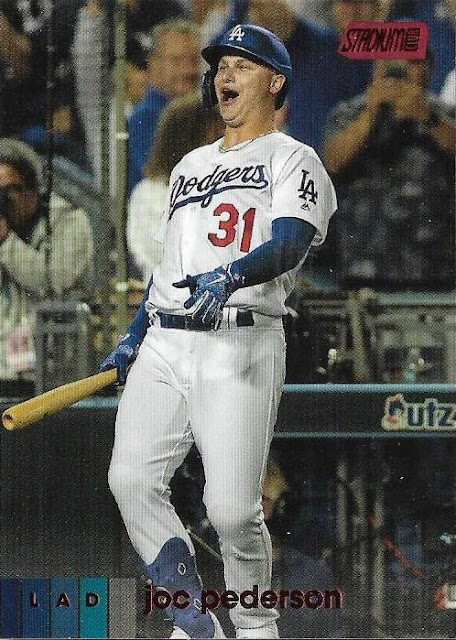 Another member of the Dodgers championship team, another parallel. Will Joc remain with the team next year? Seems to be an annual question.

The most successful cards in the entire package though are these four A&G minis. All four make my A&G frankenset binder and that's the best success I've had filling spots in a long time. 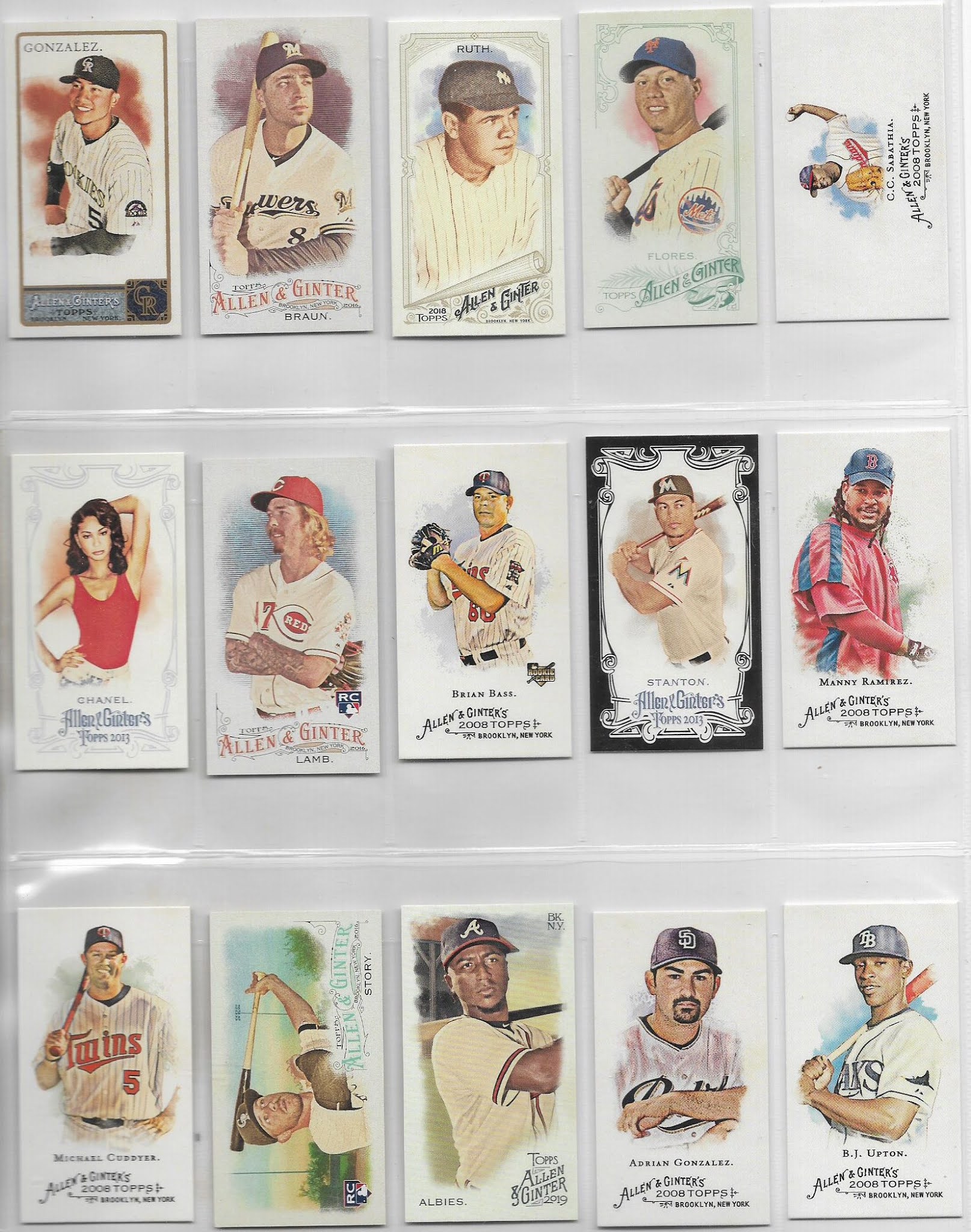 The Albies mini finally fills the last spot on the first page of the binder! 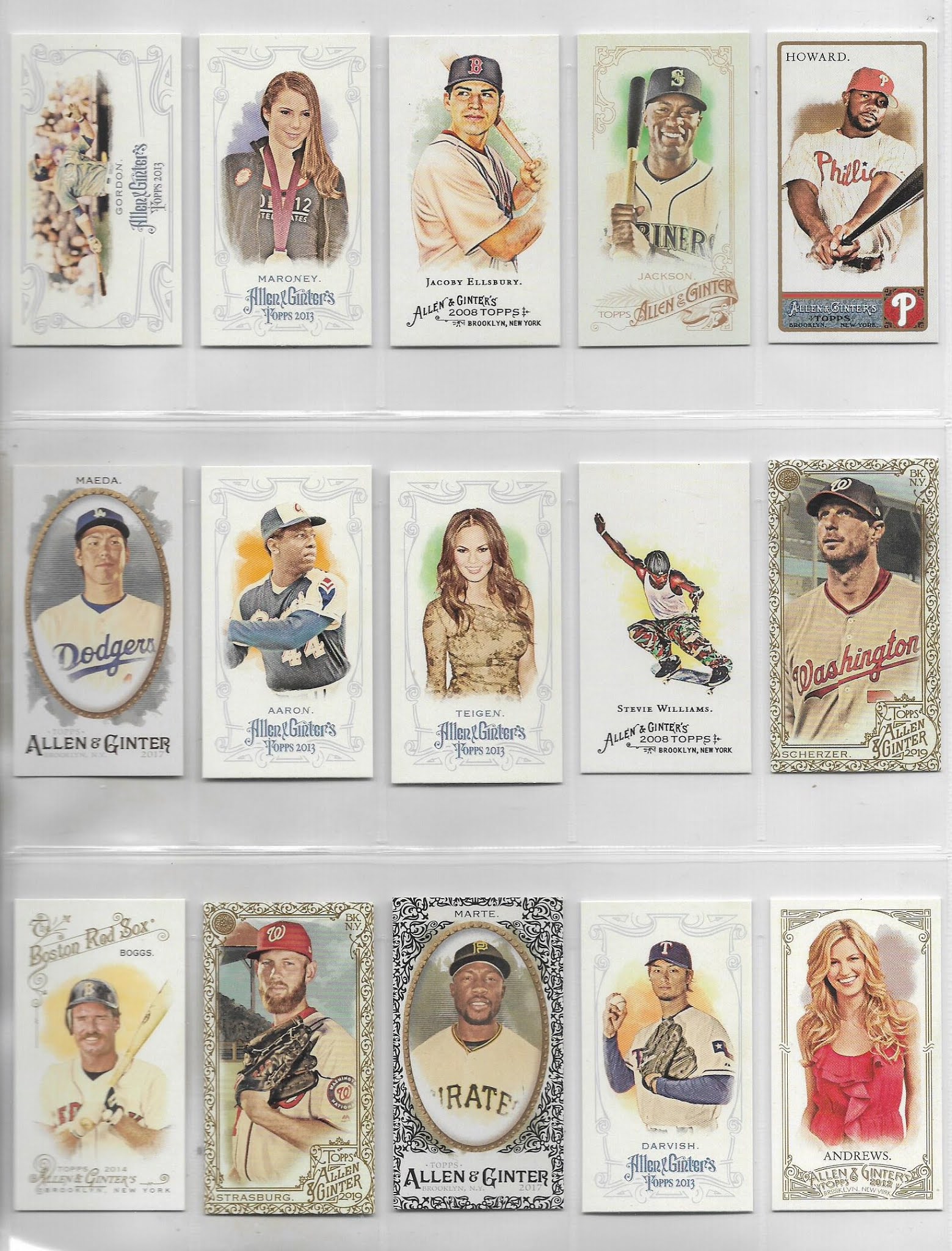 And the Scherzer and Strasburg gold borders complete another page. The Dozier gold border knocks out a Nick Saban black-border card on a later page. It's always good to boot a college football coach out of the binder. And isn't that great? I found three uses for a Washington National card. What else would I have done with them? 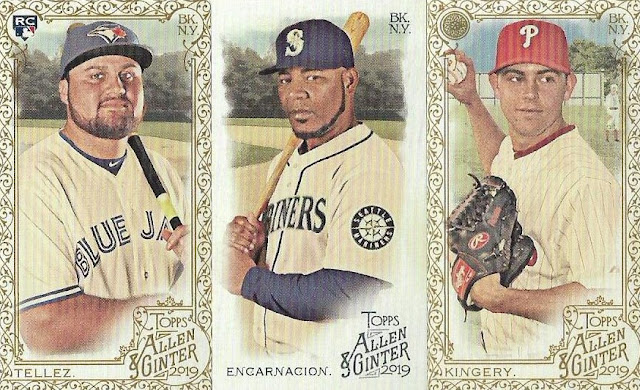 These sent minis didn't make the cut. That means they'll languish until I finally sucker someone else into this frankenset mini project. I seem to be one of the few.

Here are a handful of cards that I have already but I can repurpose for other projects. That's the rest of the package. These guys are dupes but I do happen to be organizing my giant dupes box at this very moment (a once-a-year ritual). So I can slip these cards in without missing a beat!
Nobody will say I can't make my own fun.
Even in 2020.
It's not a $365-million, 12-year contract. But it works for me.

Nachos Grande said…
Maybe 2021 will be the year I finally start putting my mini Frankenset together. Maybe.
December 3, 2020 at 7:45 PM

Adam said…
I’m totally in agreement with you on the 2020 stuff. It’s not like January 1, 2021 will be a cure all. However, I’ve already told myself that 2021 will be the year I finally get back to blogging about cards. Cards are a great escape from all the insanity out there.
December 3, 2020 at 8:01 PM

Nick said…
At the very least, I hope the world gets normal enough in 2021 to make (safe) card shows happen again. That first show after this is all over is gonna be SO MUCH FUN.

Also I've yet to see a single pack of Topps Fire in the wild this year. Not a huge tragedy, but it still would've been fun to at least know it existed.
December 3, 2020 at 8:18 PM

Johnnys Trading Spot said…
I feel for those who are under tyranny with shutdowns. I did my few weeks early on it's been just fine since.
December 3, 2020 at 10:08 PM

Chris said…
2020 has been awful all around, but I can certainly understand your reasons for ranking it ahead of last year.

I imagine that Cubs fans feel the same way about their team winning a title in an otherwise godawful year.

Nick Vossbrink said…
Looking at your Ginter pages and now I'm wondering what the breakdown setwise is. I see a lot of 2008 and 2013 cards in there and am curious if that holds consistent throughout the binder.
December 4, 2020 at 9:54 AM

Nick Vossbrink said…
Ahso. Didn't know if it was personal preference or if certain checklists had more of the non-baseball cards that we prefer.
December 4, 2020 at 11:20 AM

You're tired of everybody acting like next year will be so much better once the ball drops, and I'm tired of everybody acting like every little that's happened this year is the absolute worst thing ever, and contributing to the overall bad-ness of 2020. Celebrities and athletes die every year, it's not happening just because it's 2020. Freak weather happenings aren't unique, and aren't happening just because it's 2020. Got a hangnail, well of course you did, it's 2020!
December 7, 2020 at 7:34 PM