My first Christmas present of the season 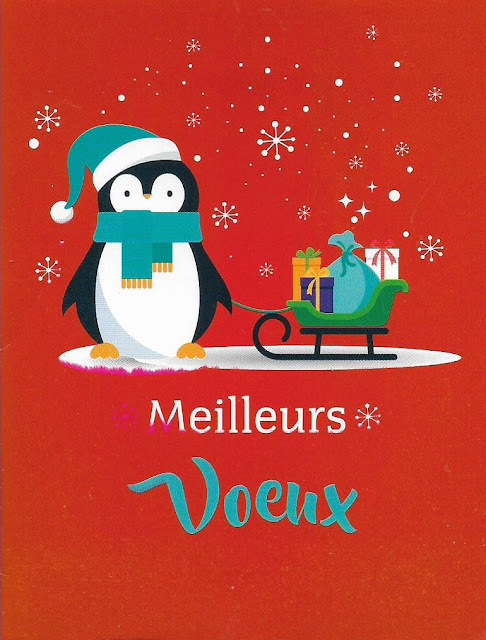 The last couple of days, I've been gathering envelopes from my latest card order from a few different online sites.
Since they're coming from several different people, a host of unfamiliar return addresses show up in the mailbox, and I just assume they're coming from ebay or sportlots.
Then I opened one envelope and the above Christmas greeting came out.
You'll notice the salutations are in French. It says "best wishes." It's not an owl, but a penguin is close enough when he's carting a sleigh of goodies.
The return address was in French, too, from Quebec.
When I opened the card, a baseball card was attached inside. This is that card: 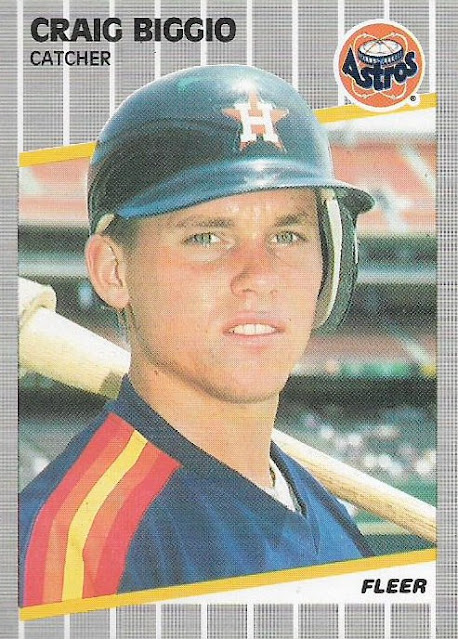 Now, if you read the post that I wrote on obtaining a bunch of cheap-o 1980s Fleer cards from the baseballcardstore site, you know that I said that I had accumulated all of the '89 Fleer cards that I needed for the set from that site except for one: the Craig Biggio rookie card.
I assumed the Biggio rookie, even though it was created dead-center in the junk wax era, goes for more than the 10 cents it costs to buy cards at the baseballcardstore. And I figured I'd just have to get that card from somewhere else.
But I didn't need to do that. Because the Biggio card arrived at my home ... in that Christmas card ... from the baseballcardstore!
Génial!
It seems that the site operator -- I think his name is Steve? -- read my post about "When the Hobby Was Cheap" and then sent the card to me! It didn't even cost a dime. Now that's online service.
Inside the Christmas greeting, he wrote a note saying that everytime Biggio rookies are posted on the site, they are scooped up right away. I was taken aback by that a bit -- are people really hoarding Craig Biggio rookies? But in this 2020 card atmosphere, I suppose nothing makes sense.
"Thanks for the great read," he added in his note. "'When the hobby was cheap' -- it's what we strive for."
Doesn't that make you want to get some cards at the baseballcardstore?
Unfortunately, this story doesn't end with "... and then my 1989 Fleer set was complete."
I was double-checking my '89 Fleer binder while filing the other cards from the set that I had gotten for a dime apiece. And, as often happens, I discovered gremlins had raided the binder.
It turns out I still need four more cards to finish the set.
So I went straight to the baseballcardstore and added Otis Nixon, Jeff Parrett and Bill McGuire.
But I couldn't find the last card I needed on the site. It's Edgar Martinez. No, it's not his rookie card, those are in the 1988 sets. But in this hoarding hobby world in which we currently reside, I'm sure a second-year Martinez is just as valuable to dudes who think stuff like that can be flipped.
So, that was quite the gesture by the operators of the baseballcardstore. And I can't expect them to produce another one.
Anyone else have a spare '89 Fleer Edgar Martinez?

Brett Alan said…
Man, that is great service indeed. I did buy a bunch of stuff from that site earlier this year, and was very satisfied as well.

Chris said…
I actually do have a 1989 Fleer Edgar. Consider it yours.

Fuji said…
Very cool of him. I just checked out his inventory this weekend... but only found two cards I could use. Not giving up though. I'll continue to check back every month or so.
November 29, 2020 at 9:38 PM

acrackedbat said…
how generous of them! i finally placed my first order too. they're a friendly bunch.
November 30, 2020 at 6:40 AM

Anonymous said…
Steven and his wife actually dropped by my house IN PERSON with my order over the weekend. I didn't want to stop him for a chat because of covid, but what service.

I'm probably 2.5 hours away, but they happened to be in the area.

Nick said…
That's so awesome! Everything I hear about the Online Dime Box just makes me want to buy from them more.
November 30, 2020 at 8:50 PM

bbcardz said…
Steven is also active and generous on the TCDb forums. At least twice earlier this year he has given cards away to TCDb members out of the goodness of his heart (one card per giveaway).
December 1, 2020 at 12:49 PM

Josh D. said…
I just placed my first (well, 1st, 2nd, and 3rd) orders from them using their layaway function. I should have about 150 cards coming my way very soon. Looking forward to it, and glad to hear about such a generous guy!
December 1, 2020 at 6:01 PM