November 16, 2020
I received a nice card in the mail a week or two ago from a reader who wanted to send me some cards on the occasion of the Dodgers' World Series victory.
Dana has sent me cards before and the notes are always nice. He's had a chance to do something I never have -- visit Dodger Stadium and play the National Anthem there with his school band!
The cards he sent were all recent Stadium Club Dodgers, including the last two that I needed to complete the team set for this year. 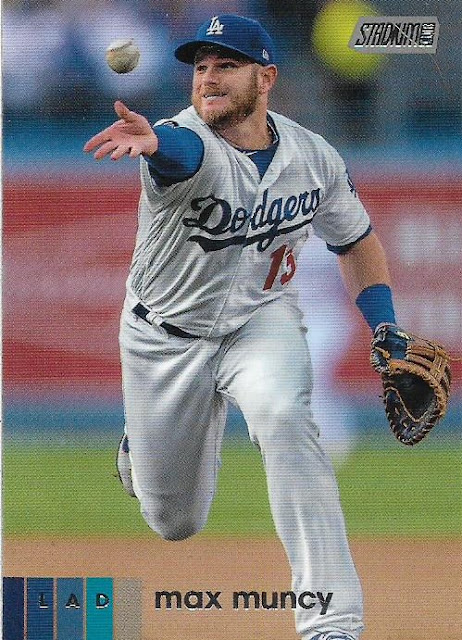 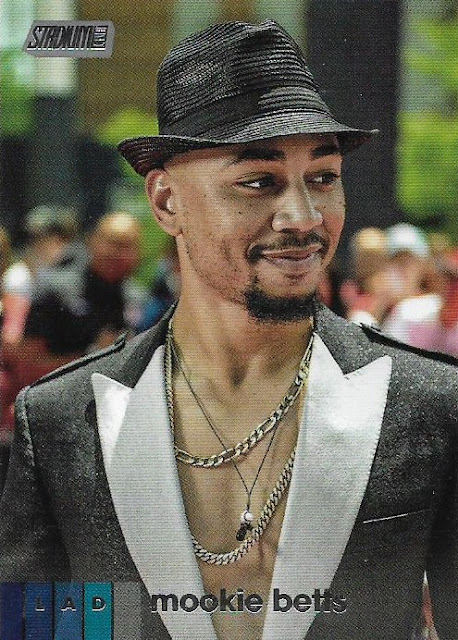 The elusive Max Muncy -- I thought I had it already but that was the hard-to-see black parallel -- and the super stylin' Mookie Betts. 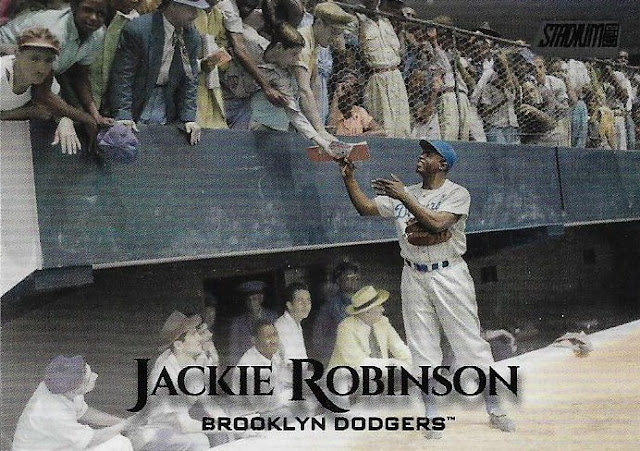 He also sent the black parallel of the Jackie Robinson card from last year's Stadium Club.
With the 2020 team set now complete, it's time to look back through those Dodger cards and declare something that I always knew:
Sandy Koufax is still mowing them down.
Koufax has appeared in six of the seven Stadium Club sets since Topps rebooted SC in 2014. And somehow, almost 55 years after retirement, he's putting together a better year-to-year card string than guys still playing today.
Let's take a look at Koufax's amazing run: 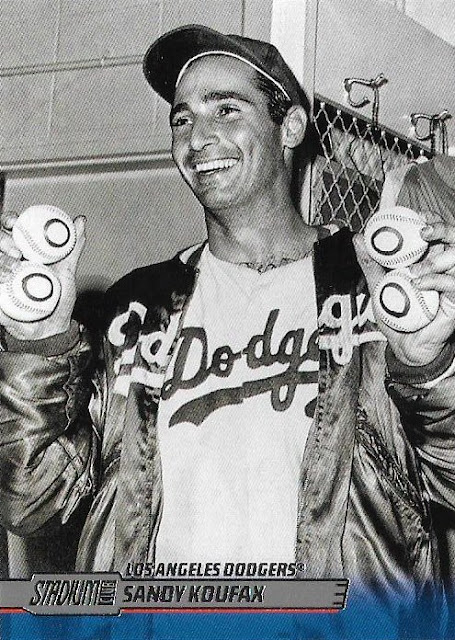 2014: A black & white shot of a beaming Koufax effortlessly gripping two baseball in each hand on the occasion of his perfect game against the Cubs in 1965. Those four career no-hitters seemed epic at the time and considering only one other player has reached and surpassed Koufax's total is all you need to know on why they're still making cards of the guy.
2015: Sadly, no card. This happens to be the only Stadium Club set I've completed. I probably should have chosen more wisely. 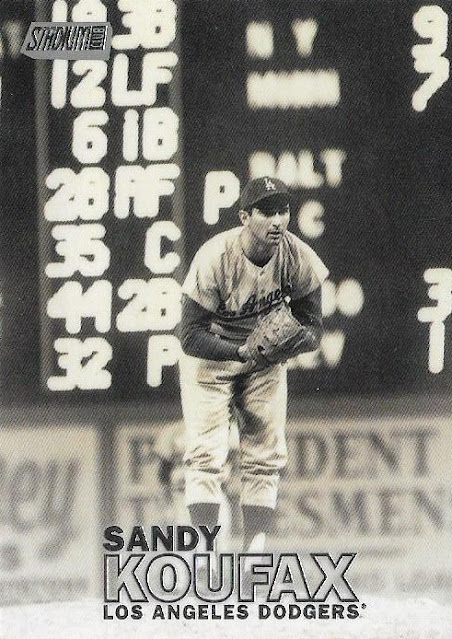 2016: If anyone was disappointed by Koufax's absence from the 2015 set, this card made that a distant memory. Simply put, this is Koufax's best Stadium Club card. This is a Walter Ioos Jr. shot taken in the middle of Koufax's third no-hitter, against the Phillies, on June 4, 1964.
My only quibble is the part of the scoreboard that shows that Koufax has not allowed a hit has been cropped out. (The linescore on the scoreboard is above the Yankees-Twins score). 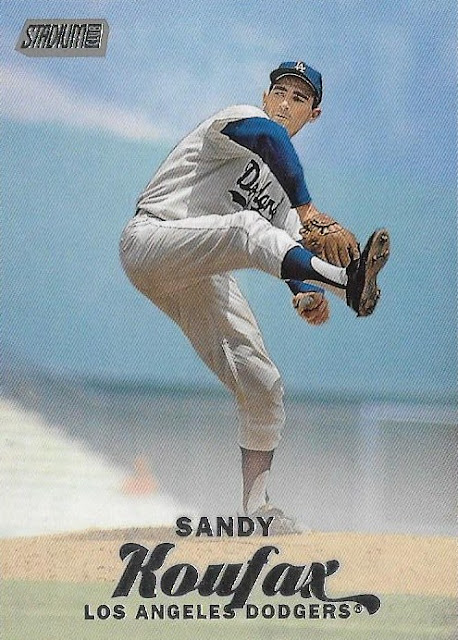 2017: Only players like Koufax can make a simple pitching motion so captivating. This is the first color shot of Koufax in the Stadium Club run. The photo was taken by famed Sports Illustrated photographer Neil Leifer during a Dodgers game against the Phillies at Dodger Stadium the year the stadium opened, in 1962. 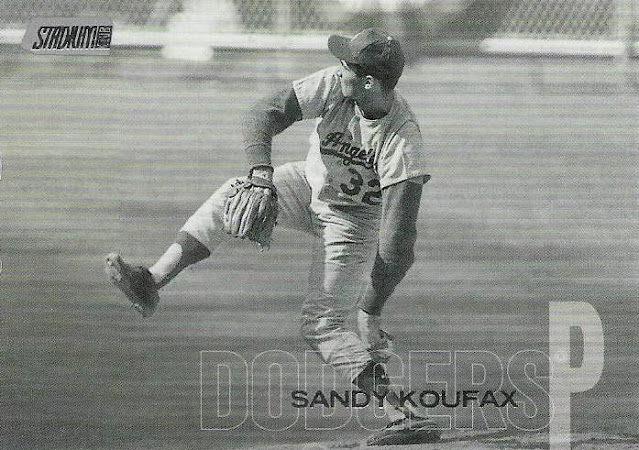 2018: Another shot of Koufax in his wind-up. This is also a Sports Illustrated photo from the 1963 World Series against the Yankees on Oct. 2. There is bunting draped over the fence just above Koufax's head, but it was cropped out of the photo. Too bad, I think it could've added quite a bit more to the picture. 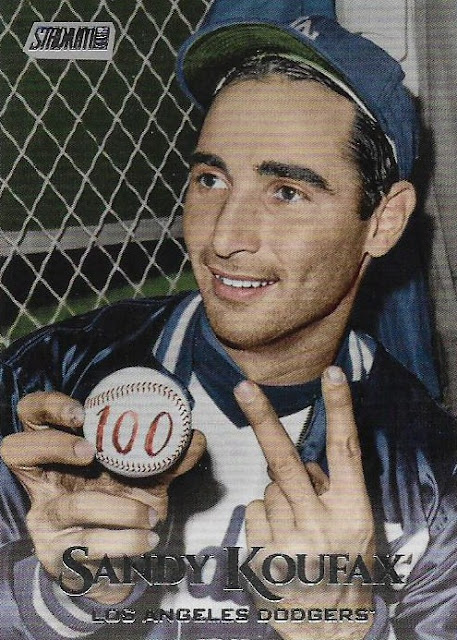 2019: Maybe a little too similar to the 2014 shot, if you're going to get picky about things.
This could be a colorized photo. I didn't find it in the usual Getty Images collection of photos. Koufax is showing off his 100th career victory, which occurred in October, 1964 against the Reds. I don't know why Koufax is signaling "two". The Dodgers won the game, 2-1, that could be it. 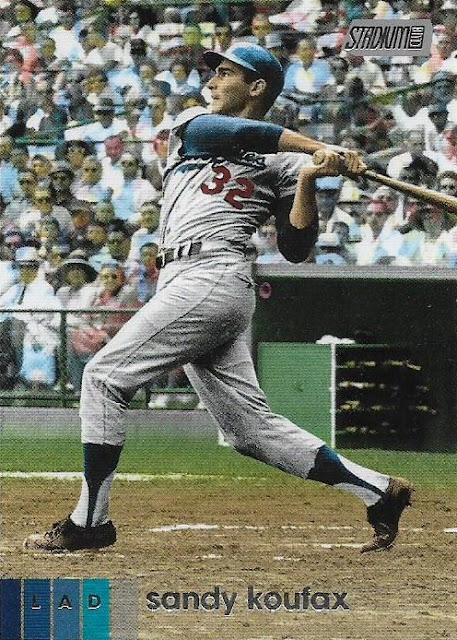 2020: Finally, this year's entry, showing Koufax at the plate.
Showing Koufax batting is a little like producing cards of Michael Jordan playing baseball. He wasn't very good at it but he was so much better at something else.
Koufax is taking his hacks during a game against the Milwaukee Braves on July 20, 1963 at County Stadium in Milwaukee. This is a photo from Robert W. Kelley, originally for Life magazine. It's likely another colorized shot.
The photo is more than a novelty for showing Koufax batting. It's the rare capture of Koufax connecting on a home run. Koufax hit just two home runs his entire career and was a career .097 batter but this three-run drive gave the Dodgers a 3-1 lead and they would hold on for a 5-4 win.
A rare instance of Koufax mowing 'em down at the plate.
Koufax has appeared so often in Stadium Club, there is the thought that maybe they're running out of great photos of Koufax to put on cards. But after going through all those images, I can safely say that there are plenty more. In fact, there are shots that I DEMAND appear in Stadium Club in future years.
We could have a Koufax Stadium Club run stretching the next 20 years.

Peter K Steinberg said…
Thanks for showing off the Koufax's. They are all beautiful. How do you feel about colorized images? I can't stand them, not that you asked and not that anyone cares. But, the cards are wonderful.
November 16, 2020 at 7:44 PM

I'm also happy as a Giants fan that Topps spreads the wealth around. 7 years of Stadium Club and no legend has appeared more than three times (Mays and Clark) while nine different guys have appeared in total.
November 16, 2020 at 10:10 PM

kcjays said…
There’s also a SP of Koufax in the 2020 set. It shows him holding a newspaper with a headline about his 3rd no-hitter. He’s seated looking over his left shoulder. Not a bad picture, but I prefer the base card of him batting. You can find the picture on Cardboard Connection in the variation listing of the 2020 Stadium Club set.
Personally I love the sets and the cards of the older players. It wouldn’t bother me though if they chose someone other than George Brett or Bo Jackson for the “old” Royals players. I’d love to see a card of Harmon Killebrew who played for them in 1975, Gaylord Perry (1983), Lou Piniella (ROY 1969), Beltran, Damon, or even Orlando Cepeda (1974)
November 16, 2020 at 10:36 PM

Fuji said…
As much as I talk smack about Topps... they have taken care of Koufax and Koufax fans with his Stadium Club cards. I mentally tried to rank my favorites here... but I imagine it's like having six kids and choosing your favorite. Although I am leaning towards the 2017. I think 2020 would have sealed the deal had they not chopped off the barrel of his bat.
November 17, 2020 at 12:09 AM