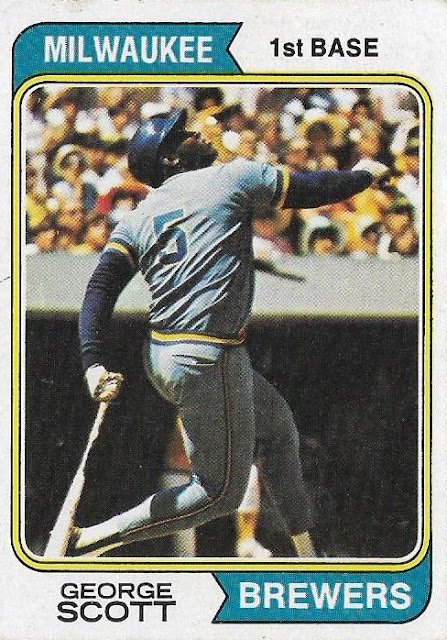 I used to run a regular feature on Night Owl Cards called "Best of the 1970s". I would show the '70s Topps cards of a particular star player from that period and ask readers to vote on which one they thought was the best.
I still have that feature listed on my links at the top of the blog, although I haven't done anything new with it for years. There are a couple of reasons for that:
1. The poll option that Blogger once offered is gone. The only way to register readers' votes is by having them comment on a particular post and, boy, is that clunky.
2. I thought the feature was about to run its course because I believed there to be a limited amount of players who had a Topps card for every year of the '70s. Even for some of the subjects I put up for vote, they don't have a Topps card for every year in the decade.
It turns out I was quite mistaken about the second reason. A week or so ago, Phungo wondered whether I had tracked down all of the players who had a Topps card for every year of the '70s. I hadn't. But I agreed it sounded like something I did. So I did.
I took a rather informal tour through '70s players and their baseball cards and came up with way more players than I thought who had a complete run of Topps cards for the decade. I'm sure I'm not the only one who is surprised by this. If you were to ask a collector about which players they thought covered the entire decade of the '70s in cards, they would likely list Johnny Bench, Reggie Jackson, Tom Seaver, Jim Palmer, Nolan Ryan, Willie Stargell, Steve Carlton, Pete Rose, Carl Yastrzemski and then start running out of names.
But there are so many more names. There are 87 of them. By my count.*
There are plenty of names that most would never guess, unless they were very familiar with that player or team. Players like Bob Bailey and Woodie Fryman and Grant Jackson received a card every year of the '70s. 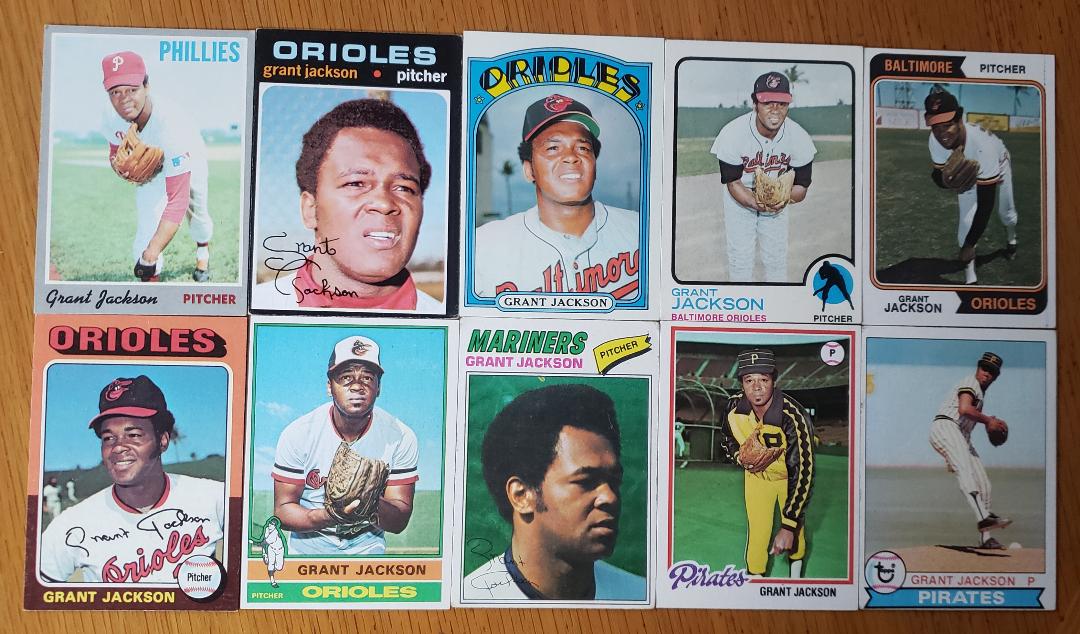 Isn't that tremendous?
Jackson received an honor that players we completely associate with the 1970s, guys like Steve Garvey and Mike Schmidt, did not.
The 87 players that I found have one solo card for each year of Topps from 1970-79. I did not include multi-player rookie cards, which eliminates several would-be members of the Kings of the '70s Club. Vida Blue, Thurman Munson, Bill Buckner, Hal McRae, Oscar Gamble and Jerry Reuss all appeared on a multi-player prospects card in 1970 and didn't make the cut.
Then there are the players who lasted an entire decade on the field but didn't appear on every '70s Topps card for one reason or another. Rusty Staub is a familiar case. He wasn't in the 1972 and 1973 Topps sets because he didn't give Topps permission to use his likeness. John Hiller would have appeared on every '70s card but he suffered a heart attack and isn't in the 1972 set. Davey Johnson left to play in Japan and, so, he has cards from the early '70s and late '70s, but nothing from 1976 and 1977.
You can scrap Rico Carty, Jerry Grote, Jim Rooker, Mickey Lolich, Tito Fuentes, Jesus Alou, John Mayberry and Dave Cash as well for missing out on just one card or two of a complete '70s set.
I'm going to list all of the players who graced every Topps set from 1970-79 in a minute, but first I wanted to show 10 surprises. These would probably be the players who would be the last guessed on a Sporcle quiz, long after Phil Niekro and Don Sutton had been typed. 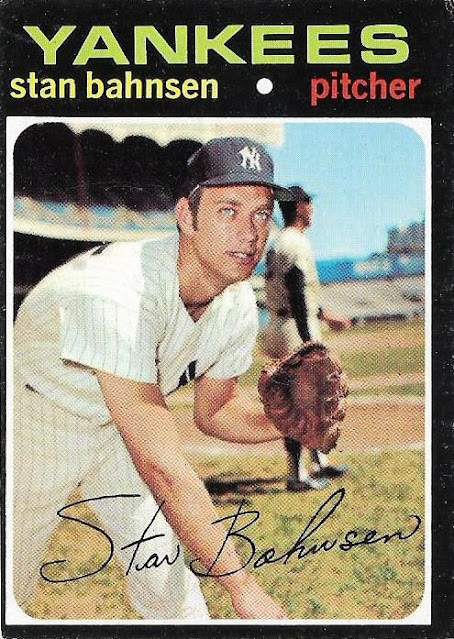 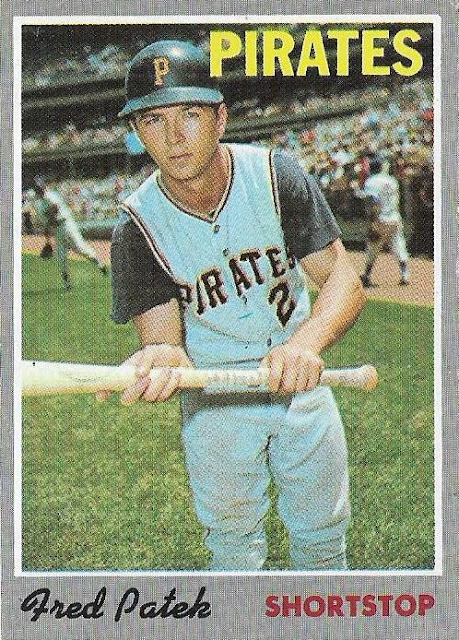 2. Freddie Patek
I am positive that if you showed a picture of Freddie Patek to a fan who never experienced '70s or '80s baseball that he or she would be blown away that Patek had a career that spanned an entire decade and that he was a starter for most of those years, as well as a member of a division-winning team. 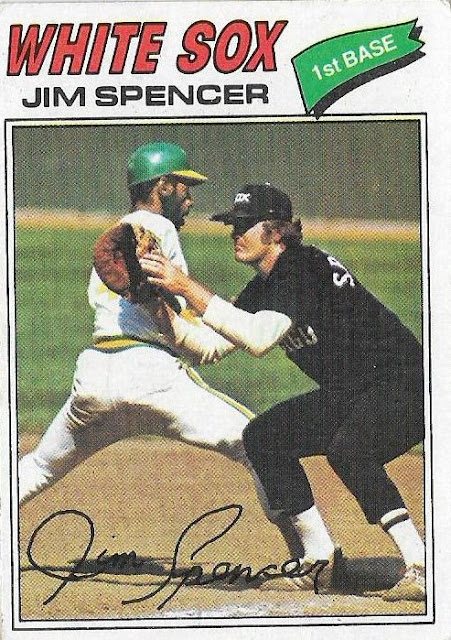 3. Jim Spencer
Some of these '70s Kings were '70s Chameleons. They moved around from team to team so often it was easy to lose sight of the fact that they were still appearing on baseball cards. Spencer started with the Angels on his '70s Topps cards, then went to the Rangers, then the White Sox, then the Yankees! 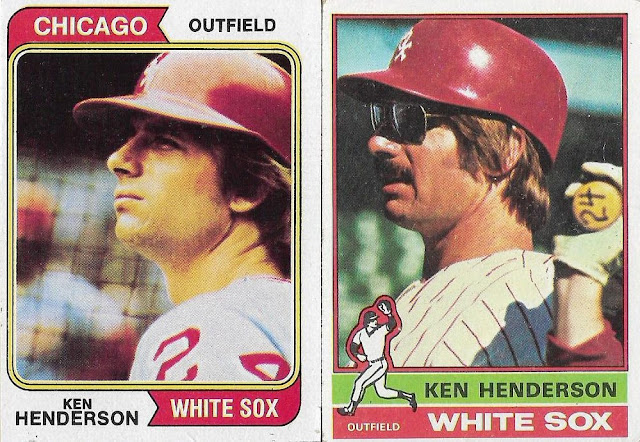 4. Ken Henderson
Another '70s Chameleon who made it doubly difficult by adding a disguise on his 1976 Topps card. 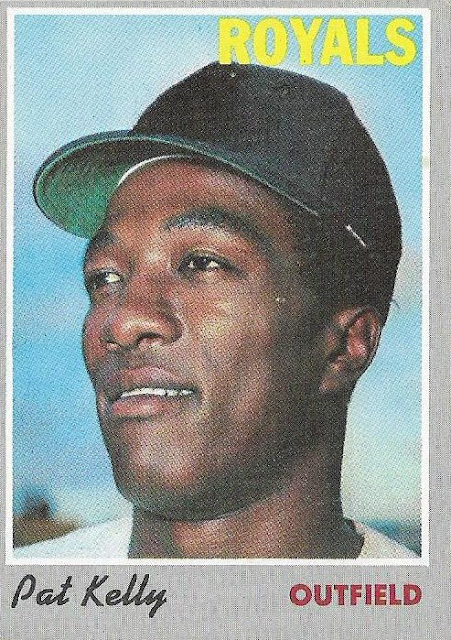 6. Pat Kelly
Another name's the same '70s King. The other Pat Kelly appeared in the '90s as a Yankees infielder. The '70s King was an outfielder with the Royals, White Sox and Orioles who I pulled out of a shoplifted 1975 Topps pack as a 9-year-old. 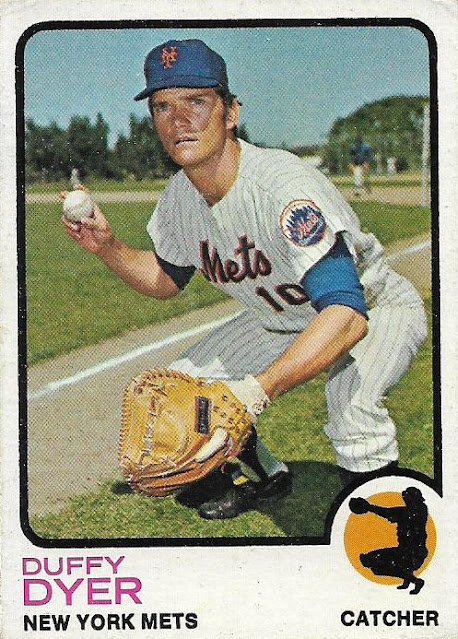 7. Duffy Dyer
Backup catchers tend to disappear in and out of baseball cards all the time. Duffy Dyer wasn't on my radar when I started looking for these '70s Kings but he is now, because he's on every card from the '70s gray borders to the '79s pennant flags. 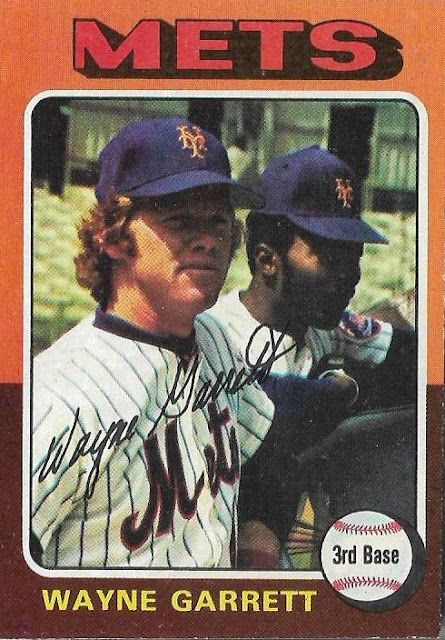 8. Wayne Garrett
Like many '70s kings, Garrett begins his '70s card run well-trimmed, but by the end of the decade, all hell has broken loose and he's paying a small fortune on grooming. 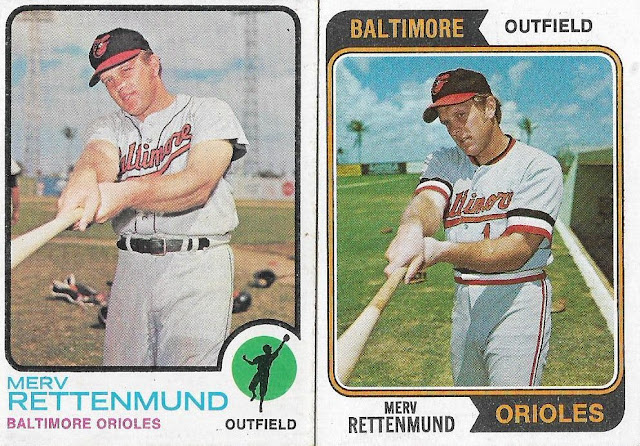 9. Merv Rettenmund
Rettenmund was a key figure during the early '70s postseasons and then kind of slipped from prominence as the decade progressed. But he's in every Topps set and he got to do cool things like wave his magic bat and clear the field of equipment (yes, I know it's two different shots). 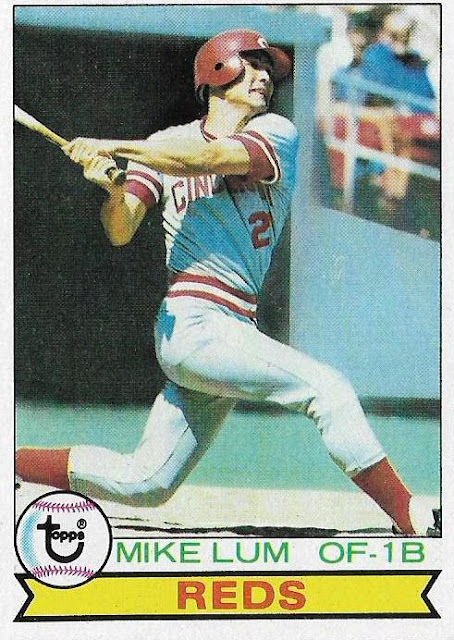 10. Mike Lum
How the heck did Mike Lum get a Topps card for every year of the decade and Ron Cey didn't? That doesn't seem fair.
OK, there are plenty of other surprises, such as Dick Drago, Ted Sizemore and Paul Lindblad. But I think it's time to list them all. Here are the Kings of the '70s. If Topps were to devote a set to '70s players, these are the guys they should include. And only these guys.
Sandy Alomar
Bob Bailey
Stan Bahnsen
Sal Bando
Mark Belanger
Johnny Bench 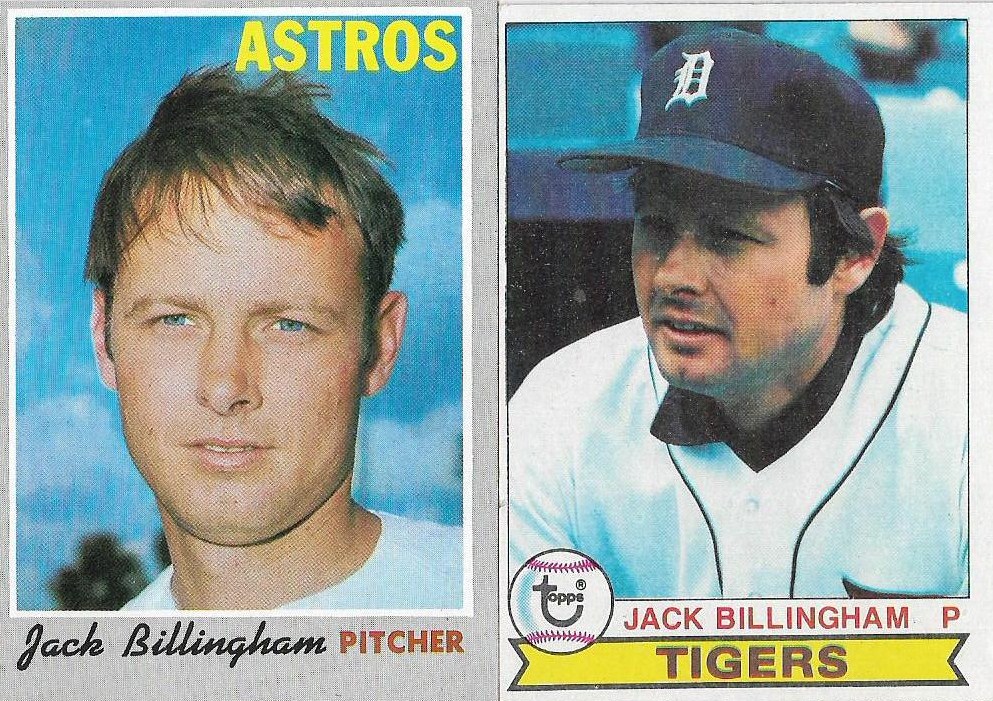 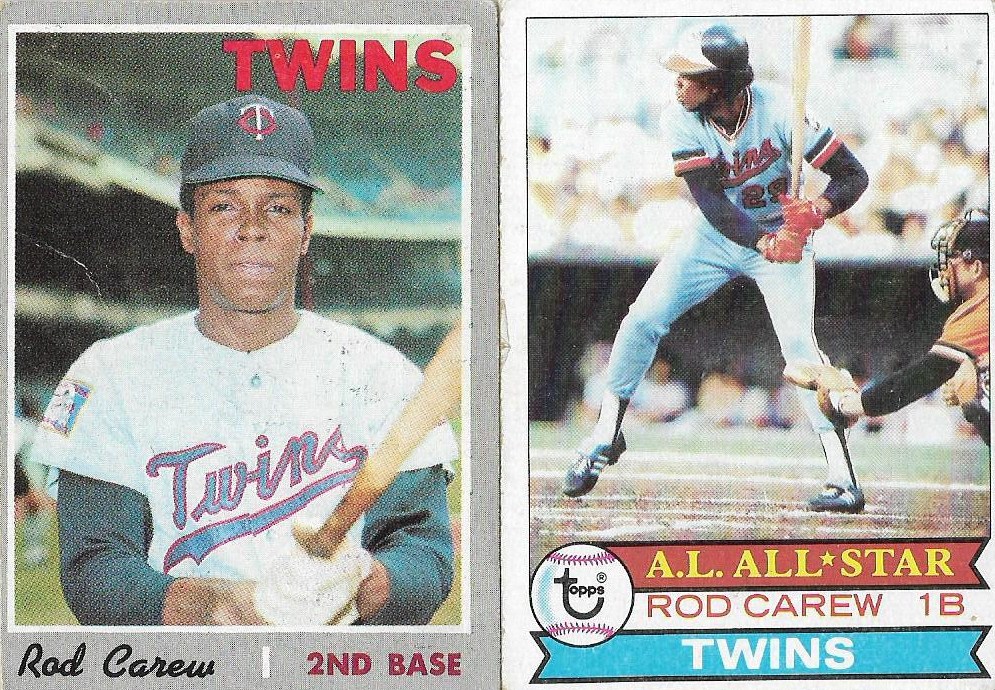 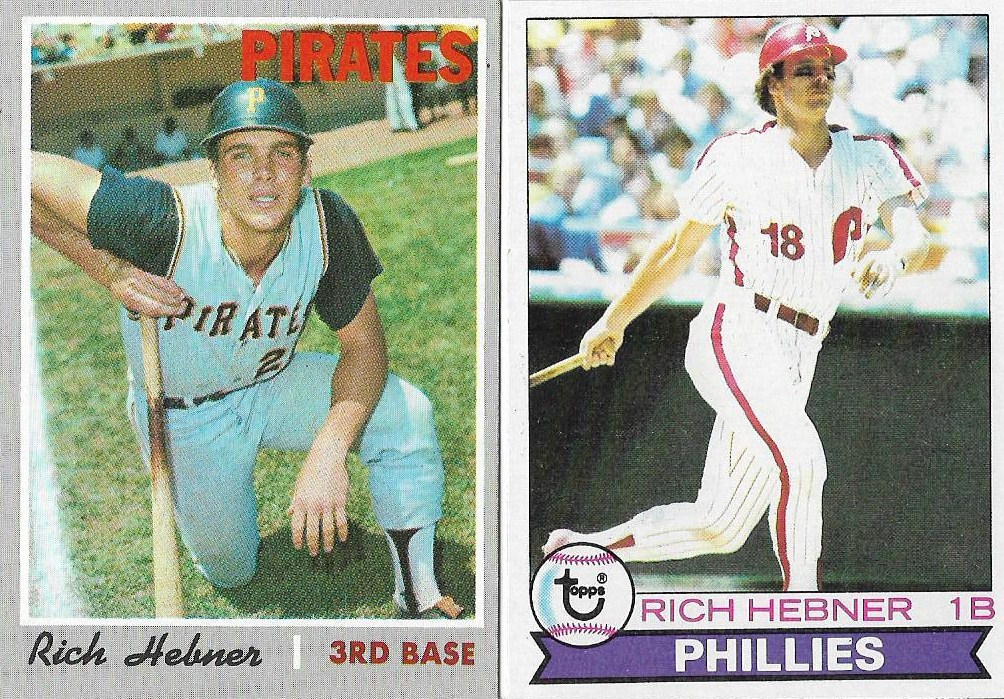 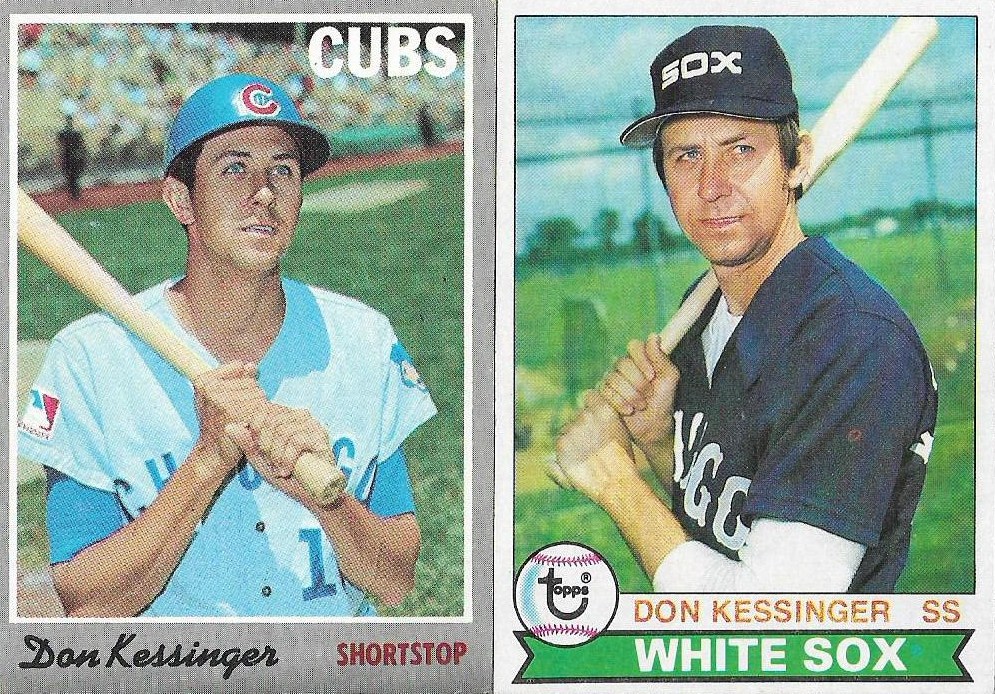 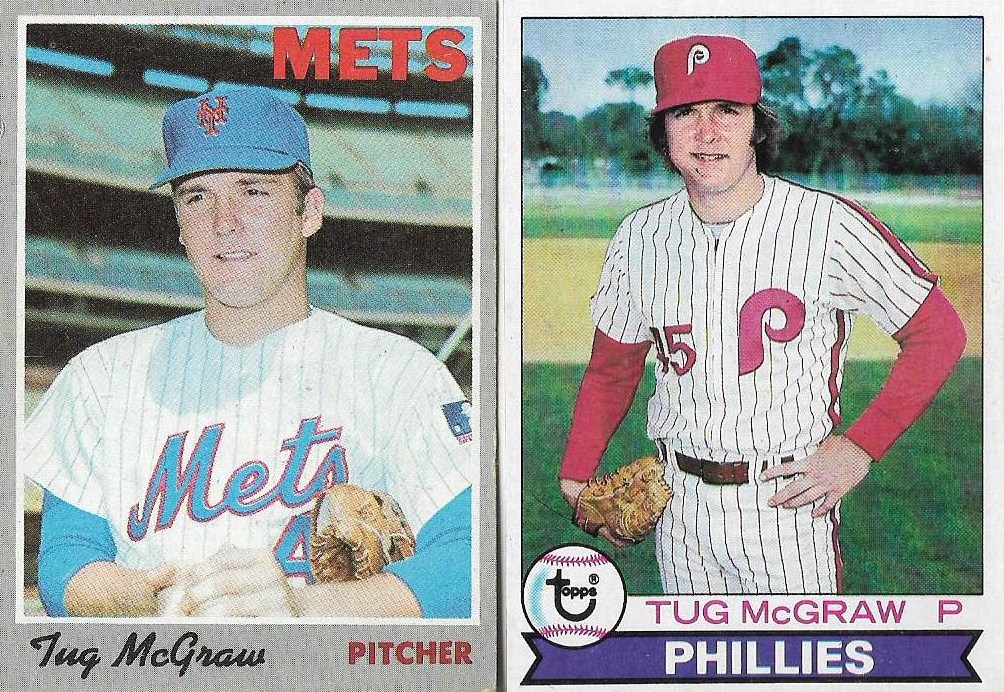 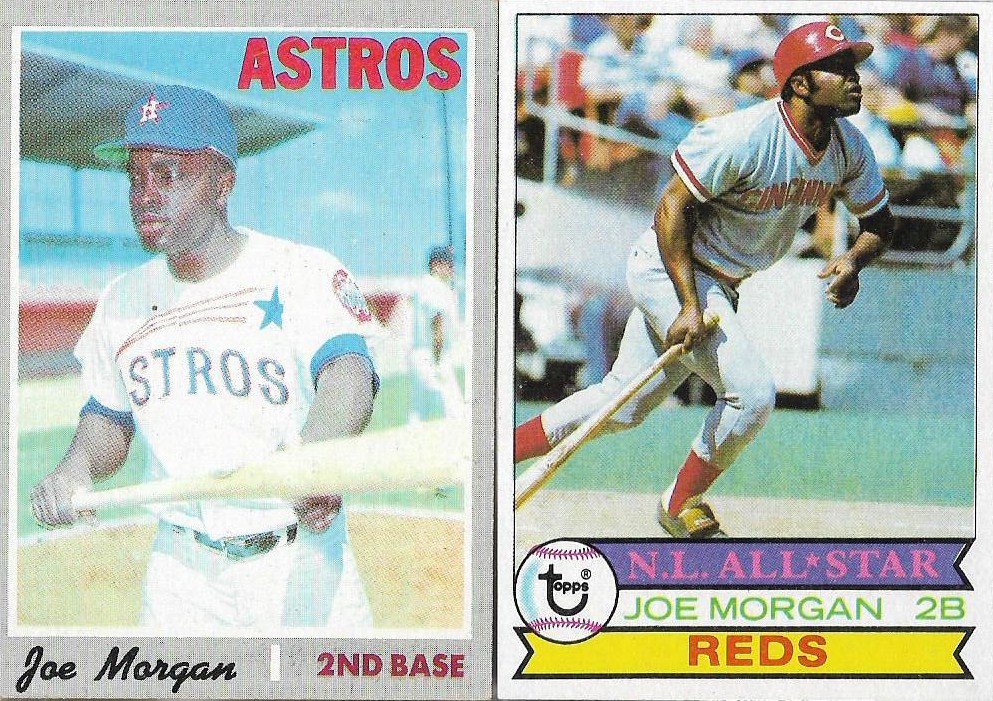 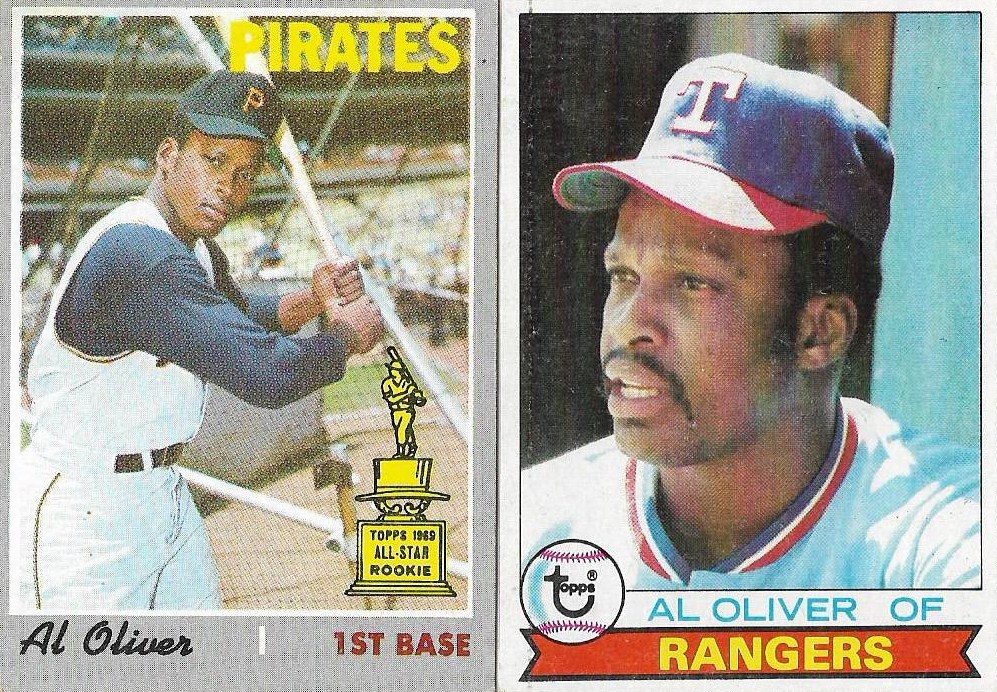 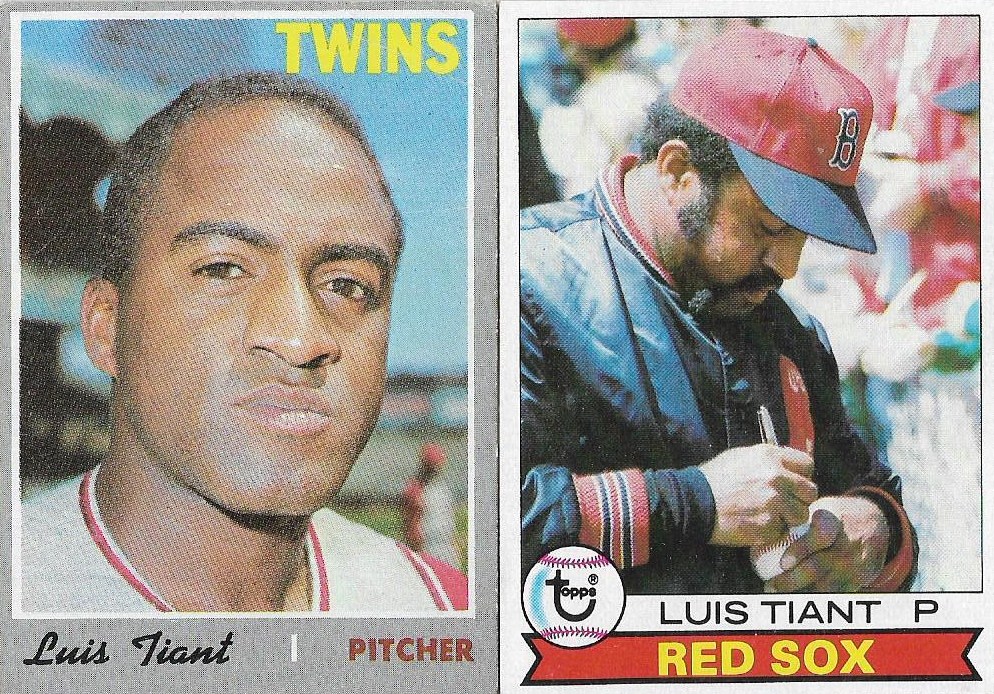 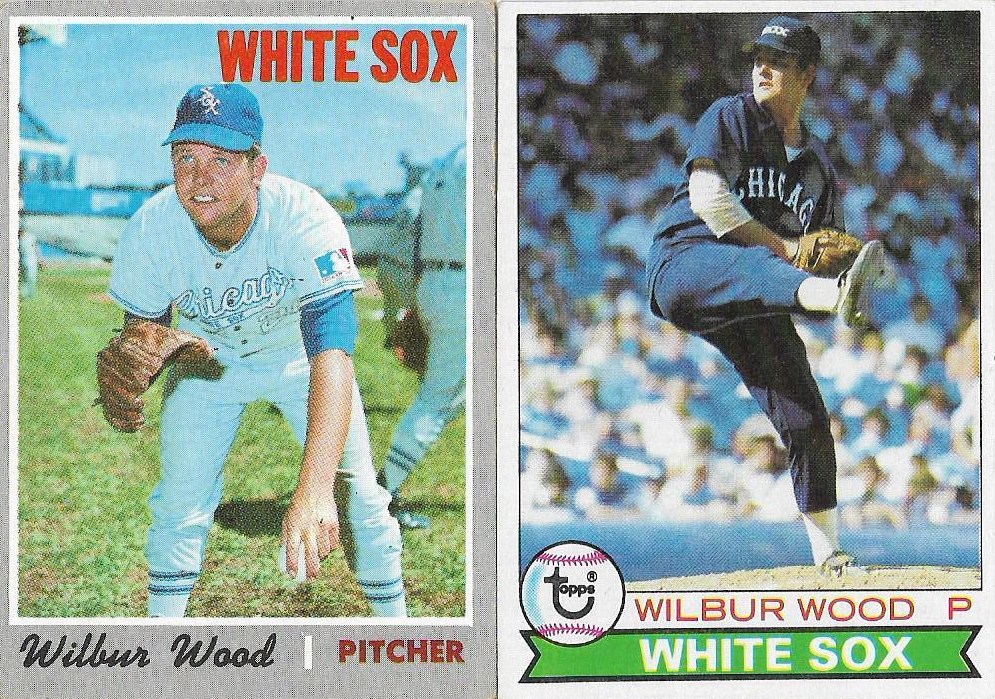 Wilbur Wood
Carl Yastrzemski
Those are the kings of my childhood right there.
In my mind, I separate the '70s into two halves. I didn't start following baseball or even being aware of baseball until 1974. That means I'm much more familiar with the players who were on my TV in the back half of the decade.
It's always been surprising, especially when I was first getting into older cards, that many of the late '70s players that I knew also had careers -- and cards -- in the early '70s.
It's for this reason that it was also a bit of a pain in tracking those players through their early '70s cards, especially the 1970 Topps set, the only '70s Topps set that I don't have complete.
I did not use any computer program for settling on this list. So it's possible I missed someone. If you spot someone missing, please point it out kindly to the person who took half of two days to compile this.
OK, that's all I've got for you now, I've got to go prepare to be interviewed on a podcast.
Yup, I know. My magazine article is apparently out, too, though I haven't seen it in person yet.
Busy, busy, busy.
----------------------------------------------------------
*With the help of The Shlabotnik Report, the total is now 98. The list of names is updated.

gcrl said…
Lou Brock belongs (I type with much appreciation for the research done to make this post possible).
November 9, 2020 at 7:53 PM

Brett Alan said…
Love seeing stuff about the guys whose cards I was pulling throughout my childhood, not just the Carews and Carltons but the Merv Rettenmunds and Wayne Garretts!

If you DID do a poll for those Grant Jackson cards, that 1978 with the great warmup jacket would win going away, right?

Shame that Blogger took away to polls. I hate it when programs take away features--if you offered it before, what's the harm in leaving it there? There are polling widgets out there--a quick Google shows that www.polldaddy.com and www.opinionstage.com have polls that work with Blogger, but I have no idea how good they are or how easy they are to use. Just a thought.

Fuji said…
Hoping to hit Barnes & Noble at some point (but heard that our county might get locked down soon due to soaring numbers). Anyways... if I do, I'll definitely look for that issue of Vintage Collector.

Mike the History Teacher said…
I love the post. I wonder how many players appeared on solo Topps cards every year in two consecutive decades. There can't be many. Yastrzemski and Jim Kaat are two from the 60s and 70s to accomplish that, assuming Topps didn't skip them any years. Nolan Ryan from the 70s-80s and Maddux, Griffey and Moyer from the 90s-2000s. I'm sure there are more, but there definitely wouldn't be any obscure names on this list.
November 9, 2020 at 11:36 PM