Match the song title: No Need To Argue 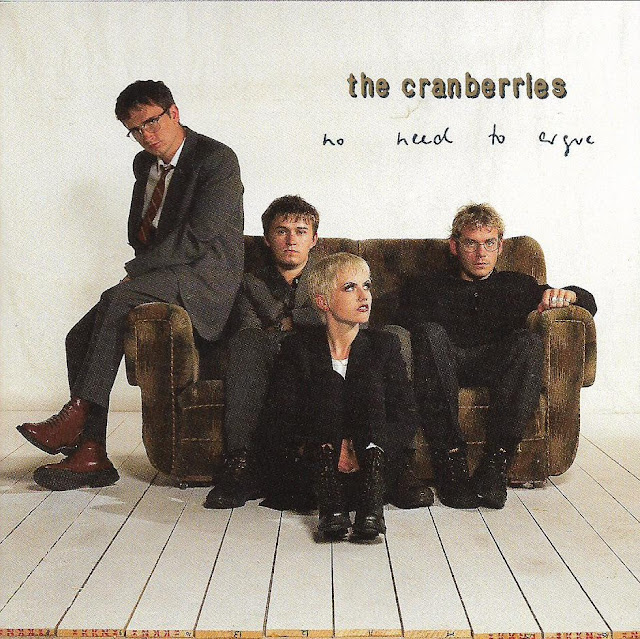 Oh, Delores.
I had no idea she was so tormented, and like many others, was stunned by her death at far too young an age, coming up on two years ago.
"No Need To Argue," the Cranberries' best-selling album, was released 25 years ago last year and a 25th anniversary edition of the album was released in September with B-sides and unreleased material included.
I had planned to post a "Match the Song Title" to recognize the anniversary but couldn't find the time to do it, maybe I simply didn't want to address such a depressing album that has become even more sad now that we know we'll never hear any new songs with Delores O'Riordan's distinctive, plaintive voice.
I purchased the CD of "No Need To Argue" in 1995, at the height of my alternative album accumulating. While many indie fans gravitated toward Nirvana, Soundgarden, Pearl Jam and Alice and Chains, I preferred the Smashing Pumpkins, Garbage and Cracker ("Kerosene Hat" is a future Match the Song Title" post).
The Cranberries' major label debut, "Everyone Else Is Doing It So Why Can't We," turned me on to the band as their top two singles -- "Dreams" and "Linger" -- played on the radio. The alternative music cats in my work office liked O'Riordan quite a bit and so did I.
I had moved away from that office by the time "No Need To Argue" was released. My memory recalls 1994-95 as a rather bleak time, learning my way in a new place with new tasks and new people and never feeling in control. I didn't have my buddies around to discuss their love for "No Need To Argue" like I did "Everyone Else". It was just me, listening to an album that addresses the themes of loss and emptiness over and over again.
So let's have some fun and try to match trading cards up with the songs!
You know the drill. So on we go. No arguing!
Here's the track list.
Match the Song Title: No Need To Argue, The Cranberries 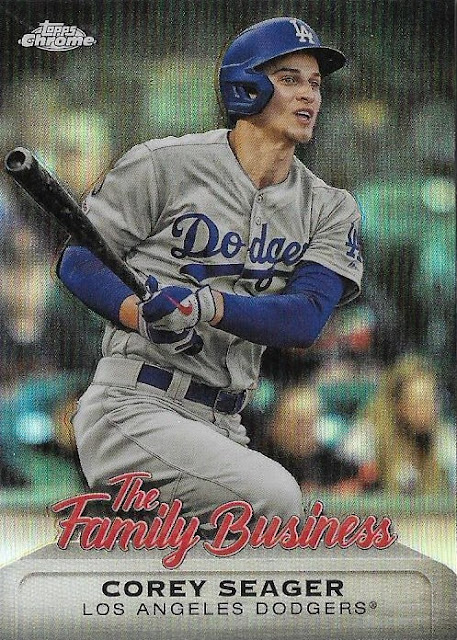 Track 1: Ode To My Family
O'Riordan yearns for the simple life now that she's made it. Now that Corey Seager is a World Series champion and MVP, perhaps he yearns for the days of playing ball in the backyard with his brother and fellow major leaguer, Kyle. Of course, the offseason of a champion MVP during COVID times is probably not all that hectic. 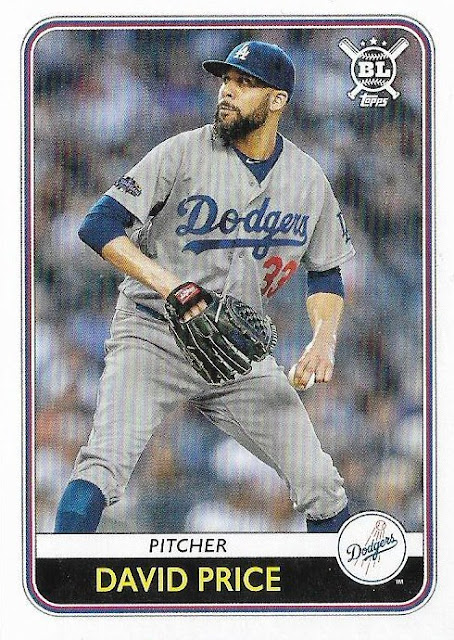 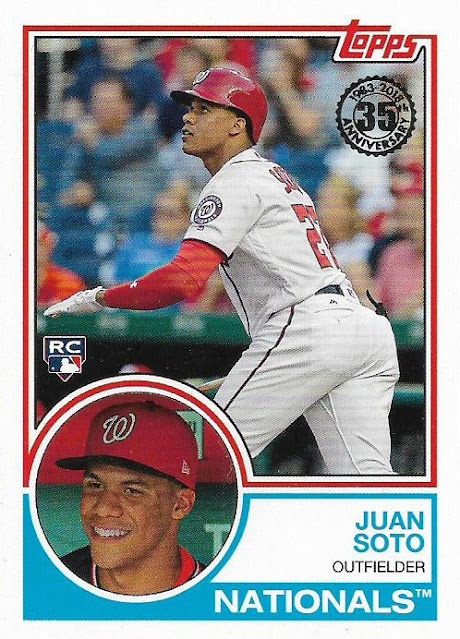 Track 3: Twenty One
Thank to Joe Buck, Juan Soto is still the first person I think of when the number "21" is mentioned. O'Riordan was indeed writing about the age, specifically the day she turned 21. Her voice is beautiful on this song. (P.S.: I love it when Irish people  pronounce the "th" as a hard "t".) 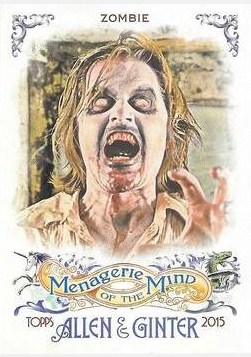 Track 4: Zombie
As much as I respect Allen & Ginter, stuff like this is why I don't get up in the middle of the night to randomly check my collection.
But the card is appropriate for such an ugly song theme. This turned out to be the runaway hit off the album, which was totally unexpected for a record label that had actually offered O'Riordan money not to release the song as a single.
Simply one of the most powerful songs I've ever heard. It graphically addresses the violence in Northern Ireland at the time and the video is even more disturbing than the song and supplies a powerful punch to this day. I watched the video for the first time in years a couple of months ago and had tears in my eyes by the end. "The Troubles" were in the news for decades when I was growing up and into adulthood. As difficult a time we're having today, I'm glad I don't have to read constantly about bombs going off in Ireland, hijackings and plane crashes as I did when I was younger. 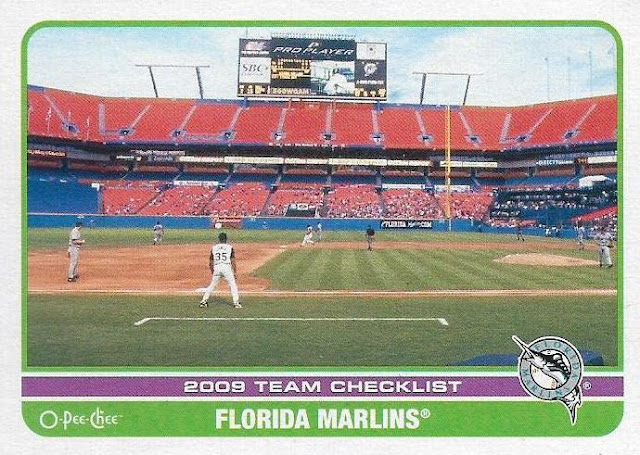 Track 5: Empty
To recycle the already old 2020 joke, the Marlins were a COVID-friendly stadium a decade ahead of time.
For me, this song sums up the entire album. The lyrics convey loss and loneliness. It's also beautiful. 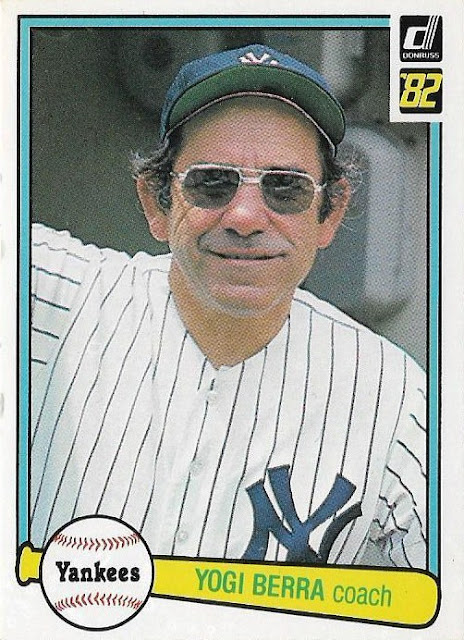 Track 6: Everything I Said
Yogi's best-selling book in 1999 was titled "I Really Didn't Say Everything I Said".
This is a break-up song in which she realizes that he's the problem, not her. "I don't make you lonely," she sings. 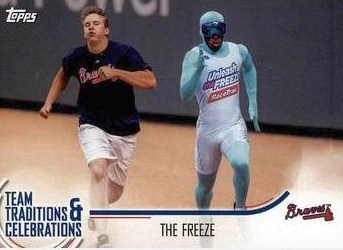 Track 7: The Icicle Melts
Do the Braves still run races against "The Freeze"? Well, in 2019 anyway? The first loss by The Freeze since Opening Day came over two months later in June 2017. You can see it 50 seconds into this clip. The icicle has melted. 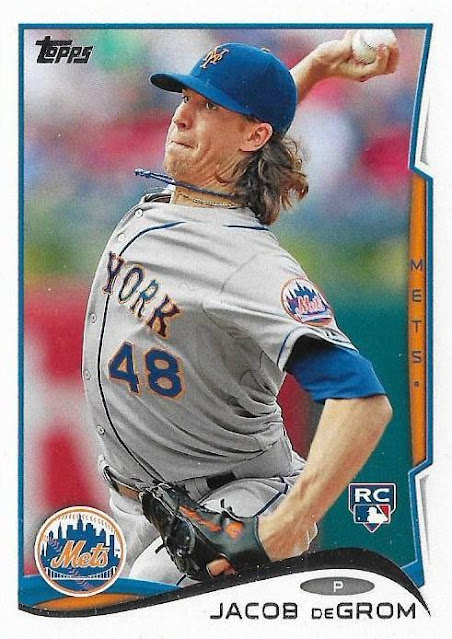 Track 8: Disappointment
This album is one of the most consistent in my collection, one of the greatest from first to last song. But, admittedly, it's dreary, and one dreary song after another would be tough to bear, if it wasn't for O'Riordan's voice and the creative things she does with it.
This is another broken relationship song, the disappointment she feels once it's over, how could she have invested so much time into that? Kind of like the disappointment Mets fans feel at the end of every season, amirite? 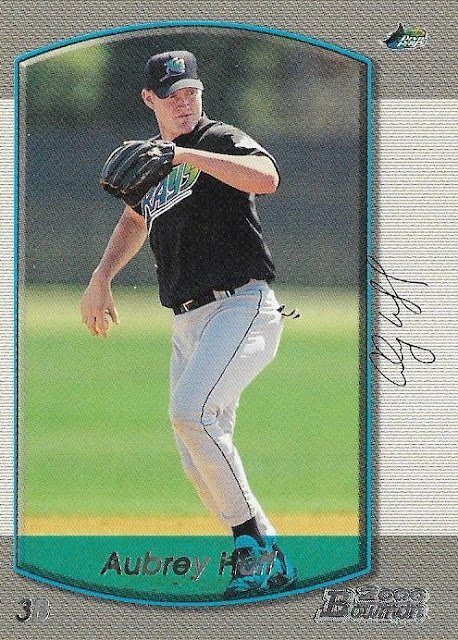 Track 9: Ridiculous Thoughts
Great song. "You're going to have to hold on to ... meeeeeeeeeeheeeeeheeeeeeheeeeeeeee!" This song was allegedly written about O'Riordan's problems with the British press.
But one of the first things I think of is how in the year 2000, we had no idea that there would be this thing called Twitter and there would be this thing called "ballplayers on Twitter" and somehow we'd feel it necessary to waste time discussing their ridiculous thoughts. 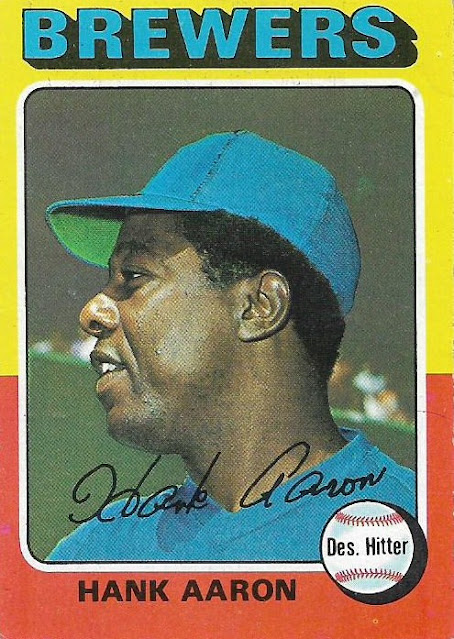 Track 10:  Dreaming My Dreams
Beautiful and acoustic. It's about something/someone you once had but now don't have and can't have anymore except only in your dreams.
When thinking about the hobby in this way, I think about cards that I traded away and realized later that it was a big mistake. I don't really have any current situations like that, but I definitely have known the feeling in the past. The first "big mistake" was trading away my Hank Aaron card in 1975 to get the Ron Cey card (I won't apologize for doing it, it was Ron Cey, for goodness sake). I spent decades thinking, "I should've traded a different card." 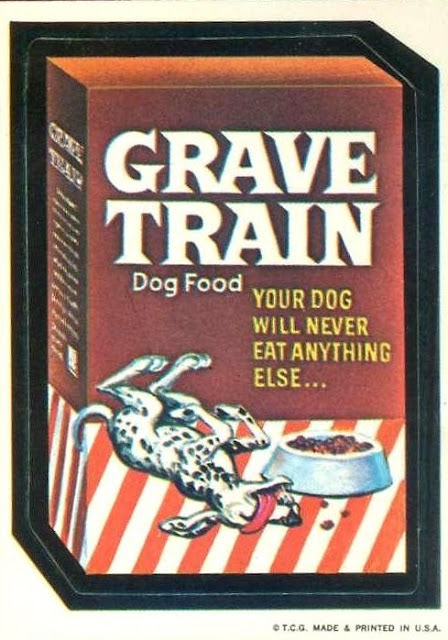 Track 11: Yeats' Grave
Yeah, good luck matching up a card with a song referencing an Irish poet from the 19th century. Let's go with an original Wacky Package sticker from 1973! Dead dogs are funny! ... I can't see this being made today. 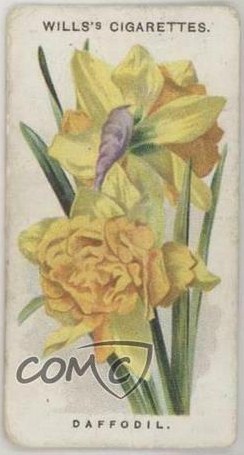 Track 12: Daffodil Lament
Did you know you can buy tobacco cards from 1910 for a buck? The one above is for sale for that price at your favorite online auction site. I just can't get myself to buy cards of flowers, though, which is why it's a buck.
This is my favorite song on the album. It's a two-part epic, mournful and slow at the start -- "I can't sleep HERE!" -- and happier in the second half. I've always interpreted it as someone who realizes they must move on from a poisonous situation into a wonderful unknown. I don't think this is what O'Riordan was writing about, but I envisioned her singing about moving her family to a new country -- "I have decided to leave here forever, I have decided to start things from here." 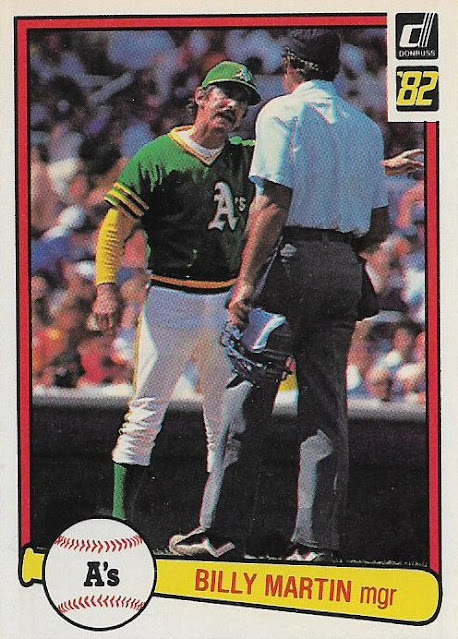 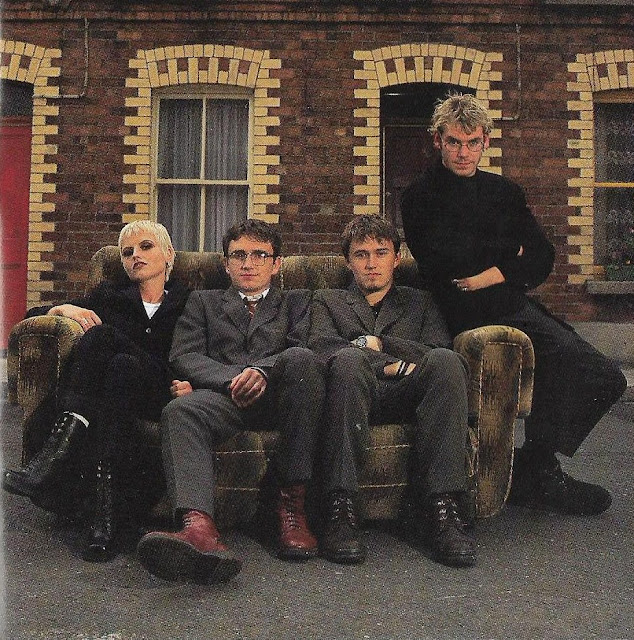 Like many music fans, I moved on from the Cranberries by the late 1990s and it's too bad because they were really one of the best things about popular music that decade.
But what a gift this album was.

The Diamond King said…
I seem to forget about the Cranberries, but when I hear them, the early to mid nineties come flooding back. My brother actually fell asleep every night to their first album on repeat. I remember coming home and going out to our bedroom in the garage (yes, we lived in the garage because too many kids, not enough money) and turning off the Cranberries after he was snoring every night.
November 17, 2020 at 7:51 PM

Peter K Steinberg said…
Great Post! I love this album and agree with you on "Daffodil Lament". I can't get enough of it. I attended a free acoustic performance in Washington DC that the concert was stopped mid-way through the second song because people broke out in a mosh pit. It was acoustic!

Angus said…
Regarding your Mets comment on Disappointed, I can feel it. But sadly, the Mets have still been better to me over the years than my Browns.

I think I know what we need to have playing in the car next time we get to travel together to a card show.

Angus said…
How did that get to be disappointed instead of disappointment? I blame autocorrect.
November 17, 2020 at 8:47 PM

Chris said…
Fantastic album. I think I got my copy at a used CD store in the late '90s. "Zombie" was a hell of a track but it's great to see an appreciation for the slower stuff. "I Can't Be With You" and "Ridiculous Thoughts" were two of my faves back in the day, and you picked the perfect MLB matches for those tracks.
November 17, 2020 at 9:27 PM

Fuji said…
Awesome post. O'Riordan's voice is beautiful. I really enjoy a bunch of these songs... and I'm tempted to buy this album for my collection. Right now... I've got Ode To My Family and Ridiculous Thoughts on one of my Spotify walking playlists.

Nick Vossbrink said…
One of those albums that immediately transports me to a time/place/age of my life.

Also regarding those flower cards. I grabbed a Tulip card a year or so ago because I wanted a tulipmania reference in my collection.
November 18, 2020 at 9:13 AM

bryan was here said…
An awesome album. An ex-girlfriend bought me the CD after we spent a long road trip together listening to "Everyone Else Is Doing It..." and we really enjoyed that. Haven't listened to it in many many years, maybe this weekend I'll look and see if I even still have it.

The Bad Wolves 2018 cover of Zombie was supposed to have Dolores singing with them, but she passed before it could happen. Their version is outstanding by the way. Updated lyrics as well.

Mark Hoyle said…
I saw the Cranberries once. They opened for NoDoubt. Not really my type of music. But I enjoyed the show. My wife and daughter had ticket and there friend had to back outside. Fun show
November 18, 2020 at 6:53 PM

Billy Kingsley said…
Linger is a song I actually know and like. Don't think I have heard any of the songs in this post, or if I did they didn't make a mark on my memory.
November 18, 2020 at 11:24 PM

Jafronius said…
Wonderful album and wonderful voice. The 90s were full of strong female singers and Delores was one of the best.
November 30, 2020 at 9:35 PM