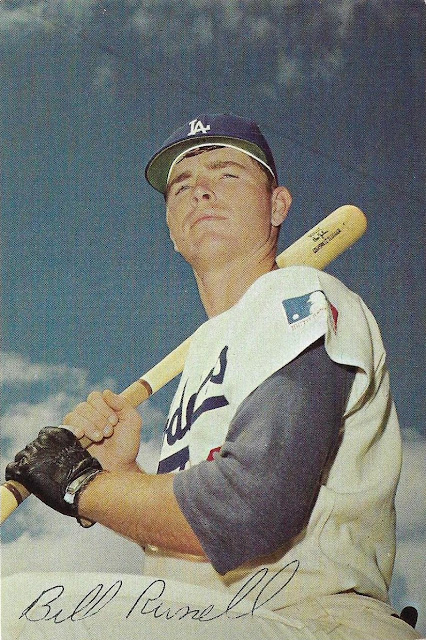 I don't do such a great job tracking down lesser-known Dodgers sets, especially regional issues.
I have enough on my plate when it comes to collecting cards from major issues, along with all the set-collecting I do. So regional sets often get ignored.
Sometimes, in a spasm of guilt, I'll suddenly add one to my want list and feel a little better about myself. "See? I can collect obscure stuff, too!"
But it's usually a half-hearted gesture. Often I have no idea what the cards are or even what they look like.
Recently, that happened when I added the 1971 Ticketron Dodgers wants to my blog lists. I'd known about the Ticketron set in the past, one of those regional issues that bounced around in my brain. But I had never seen it before, didn't know anyone who had them. I didn't expect to get any, really, until I made it my priority at some distant point in time.
I basically put the set on my want list sight unseen.
Then I received a couple of PWEs from gcrl of cards as I see them.
In it were five 1971 Ticketron Dodgers. Five MONSTER-SIZED 1971 Ticketron Dodgers.
"Oh, I had no idea," I said to myself as I pulled them out of the envelope, "that these were freaking huge." 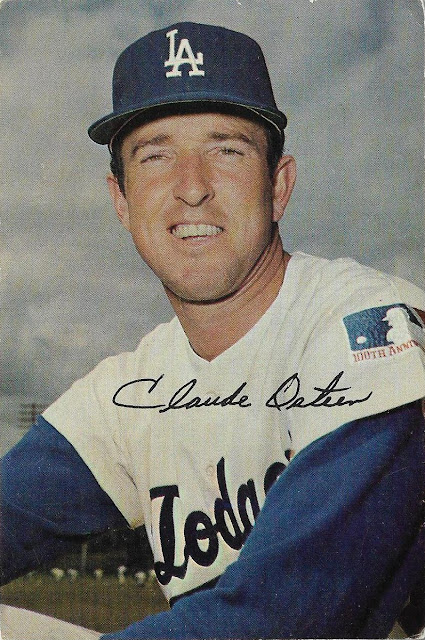 The cards are postcard size. In fact, they are larger than postcard size, both in width and height. They will not fit in the four-pocket pages I have, which are intended for postcards.
I'm not sure how to best store these. Two pockets, I guess. Maybe three-pockets would work, although I've never had any three-pocket pages in my collection. 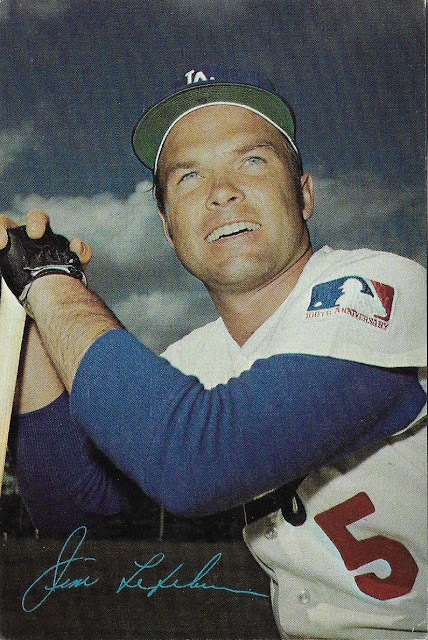 You can see that the photos in this set are slightly old, from 1969, judging by the 100th anniversary MLB patch on the arm sleeves. 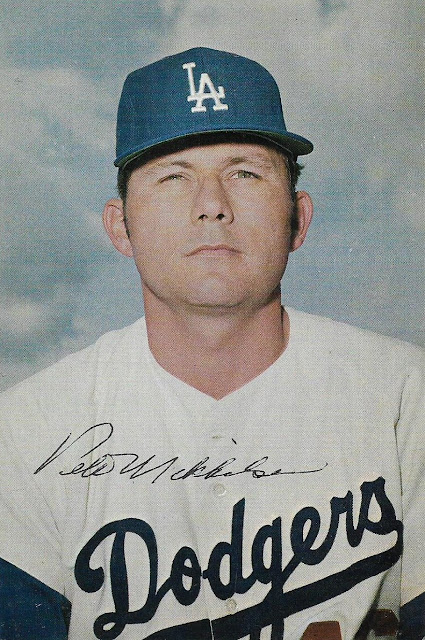 Team issues mean getting players like Pete Mikkelsen in a Dodger uniform, nothing that ever appeared in Topps. This is the same picture that appears in the '71 Dell Stamps set. Mikkelsen pitched in 145 games for the Dodgers between 1969-72, a lot longer than he played for the other teams in his career. Yet his Topps cards stop at the 1968 set. Sounds like a licensing issue that was never resolved. 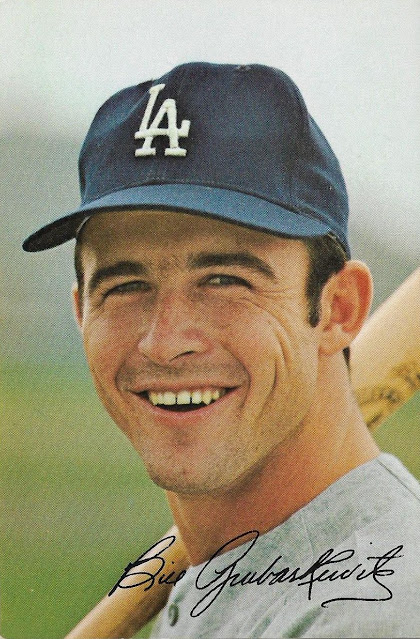 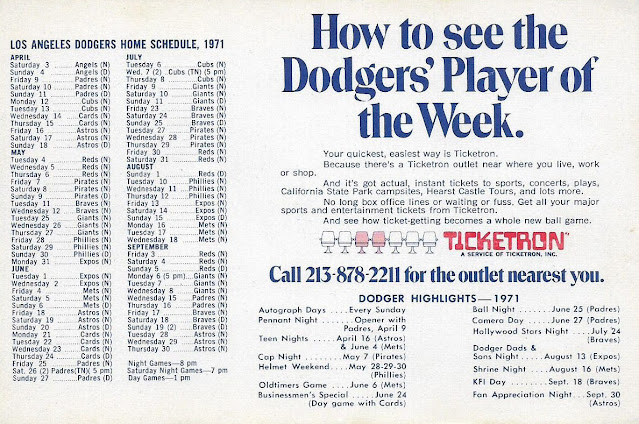 All of the card backs are the same, displaying the 1971 Dodgers home slate, the promotional schedule and a Ticketron advertisement.
Jim also sent some regular-sized Dodgers from my want list. Going through those cards looking through the lens of the Dodgers' 2020 title, they suddenly seemed like a timeline -- moments along the way that helped build to the championship. 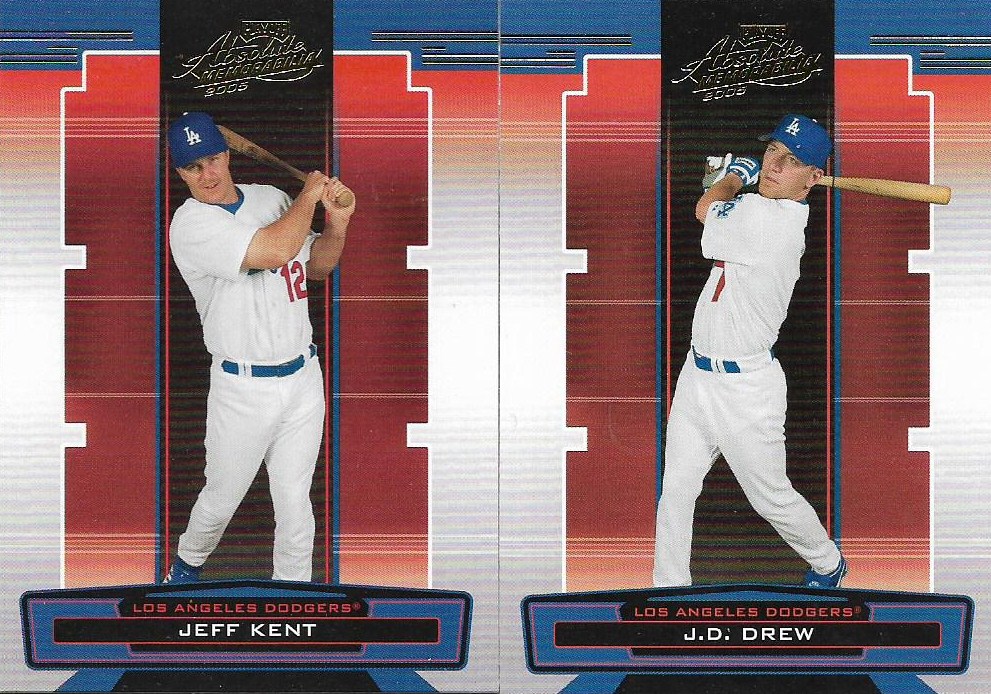 2005: The nadir. Fourth place, a 71-91 record and unappealing players like Kent and Drew on the roster. 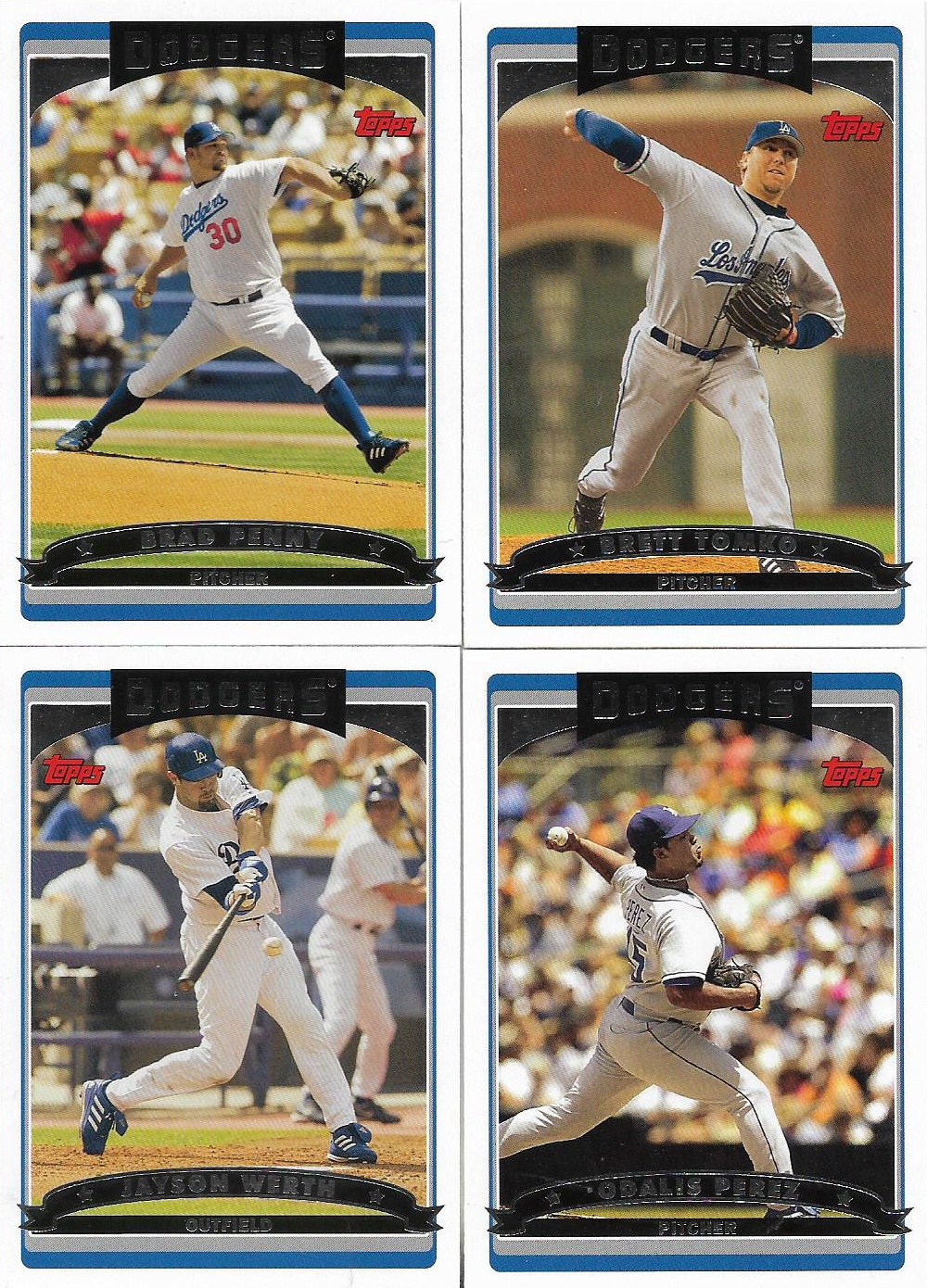 2006 (team-issued set needs!): The Dodgers finish second and then suffer a humiliating sweep by the Mets in the NLDS. 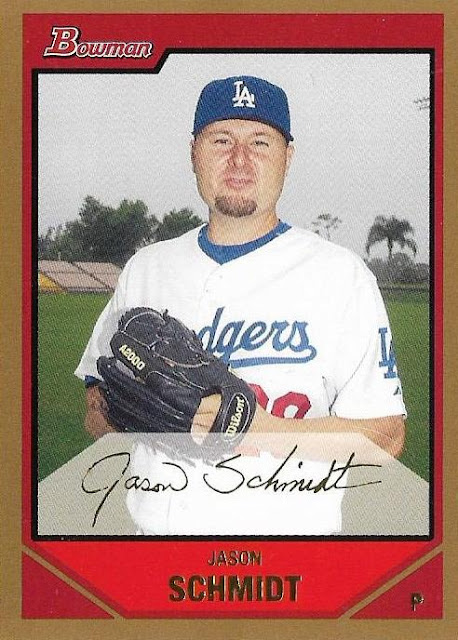 2007: Still doing dumb things like signing Jason Schmidt, which means a team that did well in the first half and then fell apart, ending up in fourth place. Ned Colletti, go away! 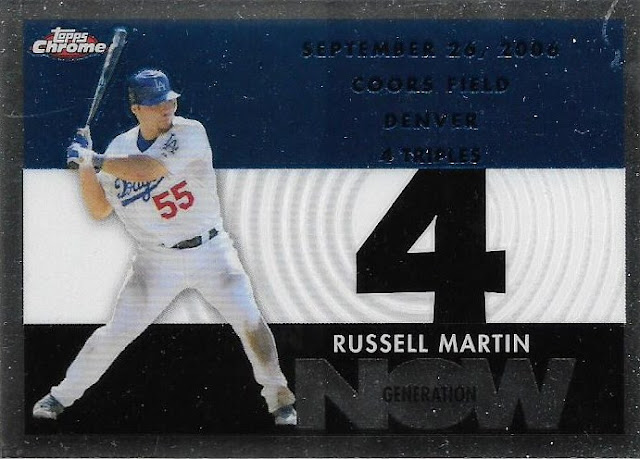 But 2007 was also the beginning of removing dead wood from the Dodgers and adding young players who would lead to back-to-back first-place showings in 2008 and 2009. 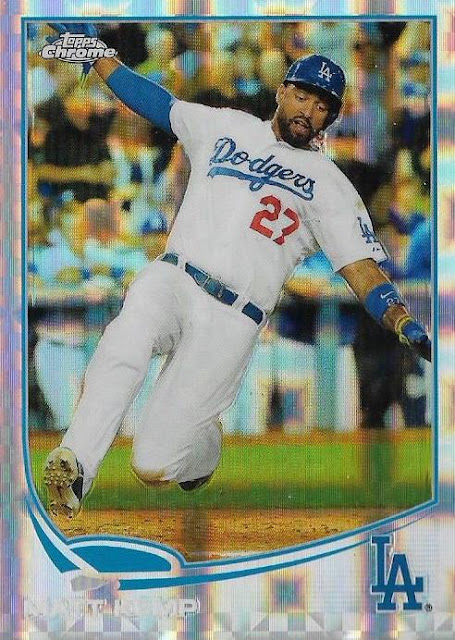 2013: By now, those young players were either established or had moved on but the Dodgers were beginning their current streak of eight straight NL West pennants. In fact, dealing Matt Kemp, after many productive years, to the Reds, helped lead to the Dodgers landing Mookie Betts in a roundabout way. 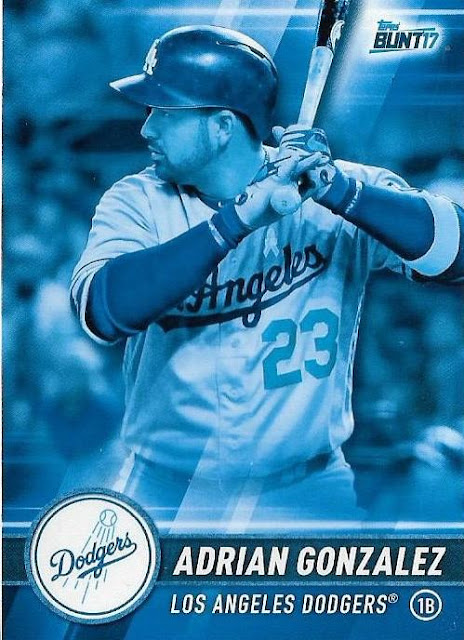 2017: The almost-but-not-quite season-enders had finally advanced to the World Series. Same result: a loss to finish the season, but it was progress. It was also the last year that Adrian Gonzalez played for the Dodgers.
The other day I was stashing a copy of the sports section with the Dodgers' Series-clinching story into the drawer where I collect favorite sports sections that I've designed. The stack is large (I've been doing this awhile) and there isn't much space in the drawer. So, every once in awhile I weed out older sections.
As I was doing this, I found a sports section folded randomly that I had saved, but not because I had designed it. It was just something I thought I wanted to hold on to because of a story it contained. I unfolded it and looked at it. It was the day after the big trade with the Red Sox in 2012 in which the Dodgers acquired Gonzalez. It was such a huge deal at the time. But now? It didn't seem like much. I tossed the copy. 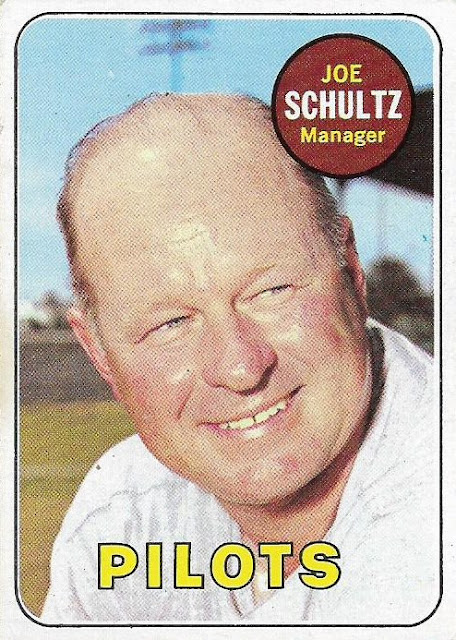 Actually, the spark for the exchange of envelopes between Dodgers fans Jim and I didn't even have to do with Dodger cards. Jim offered up some cards in one of those not-so-free Fridays and I jumped at some '60s vintage. 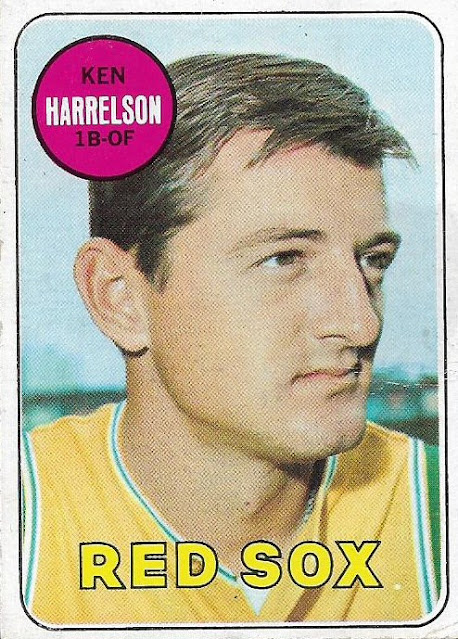 The card of what has to be the Baldest Man in The World and a terrific photo of Red Sox player wearing green-and-gold are two of my favorites from the crazy 1969 set. These were no-brainers. 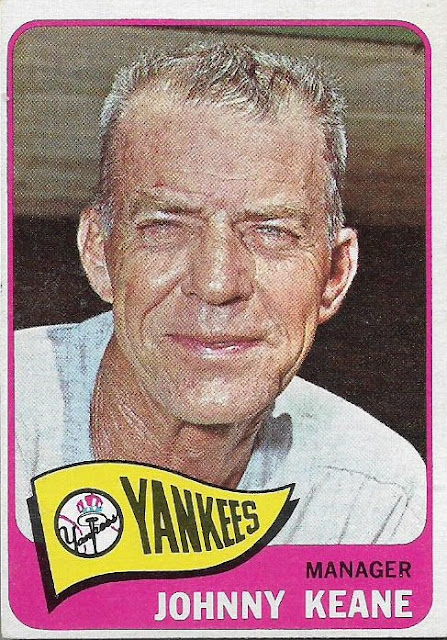 I needed to get another manager card, too, this 1965 card of Johnny Keane. I often wonder what kind of social media explosion would have occurred had Keane did now what he had done in 1964. His sudden resignation from the Cardinals immediately after leading them to the World Series title and then signing to manage with the Yankees, the team the Cardinals beat, a few days later would have caused "WHAT IS HAPPENING" posts and all kinds of outrage for days had it taken place today.
Obviously, wanting to own cards like a 1965 Yankees card of a manager is what's keeping me from paying attention to Dodgers regional team sets and the like. But that's just me. I collect what I like and sometimes the parameters are not exactly narrow.
It's still all kinds of fun. Even if the cards don't fit in the pages.

Old Cards said…
Great vintage cards even if they are hat less head shots. I am currently attempting to fill in the manager cards for some of my 60's collections. Used to think I didn't want them,but I changed my mind.
November 3, 2020 at 7:28 PM

Nick Vossbrink said…
Two pockets for the Ticketrons if they're a all like the Giants cards.

Side comment on these. Ticketron with that logo and even the concept of a universal box office is something that always felt more 1980s to me and I still haven't quite wrapped my head around it existing at least a decade earlier. Makes me want to look up its history.
November 3, 2020 at 7:29 PM

Fuji said…
These postcards schedules are cool. I know it's never gonna happen, but it'd be so cool to see these make a come back. As much as I enjoy pocket schedules, I'd much rather collect these. Then again... I've never been one to complain about oddball sizes.
November 3, 2020 at 7:31 PM

Jeremya1um said…
Those are neat photos.
You should do a post showing your favorite articles in the paper that you did that are in the drawer.
November 3, 2020 at 7:45 PM

Mark Hoyle said…
I recently grabbed two ticketron Dodgers for my type collection. Dick Allen and Russell. Postcards are definitely underrated in collecting
November 4, 2020 at 4:34 AM

Anonymous said…
I believe the Ticketron photos were actually taken spring training of 1970. Back then they wore the previous year's uniforms for spring training.

AdamE said…
I never saw these before but I have to say they are quite good looking.

Matthew Glidden said…
Two pockets for those Ticketrons make sense to me, even if that leaves you looking at sideways Dodgers. Do those five arrivals stoke you for working on the whole set? (I'm down to needing Sutton, myself.)
November 6, 2020 at 5:16 PM