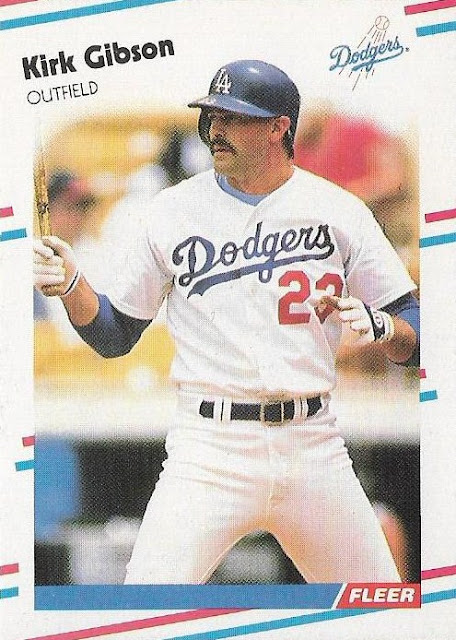 A guy I work with is a Tigers fan. Every once in awhile, the Tigers' recent history of ineptness or fairly recent Detroit World Series failures will come up and he will end it with a sigh and add "well, we'll always have 1984."
I knew the feeling.
For me, and all Dodgers fans, it was "well, we'll always have 1988" for quite awhile. During this past World Series, I read more than a couple of L.A. fans' wishes, that if only everyone could stop bringing up 1988 all the time, that if the Dodgers could win the Series, it would end, or at least lessen, the references to '88.
And so, it happened. The Dodgers won the 2020 title, and, now, this is me putting 1988 aside with this post.
It's time for a new episode of Joy of a Team Set, featuring those 1988 Dodgers.
I'm going to do it a little differently this time. I've always wondered how the various card sets that were around at the time covered the '88 Dodgers. I've known that 1988 Donruss, Fleer, Score and Topps sets had somewhat different rosters for the Dodgers, but outside of an example here and there, I've never known the exact layout.
(For a proper look at card sets' treatment of the 1988 team, I really should look at each of the 1989 sets, but 1989 isn't a 1988 set, is it? This is all about 1988!)
So I am going to show each of the Dodgers team sets from that year. Here we go: 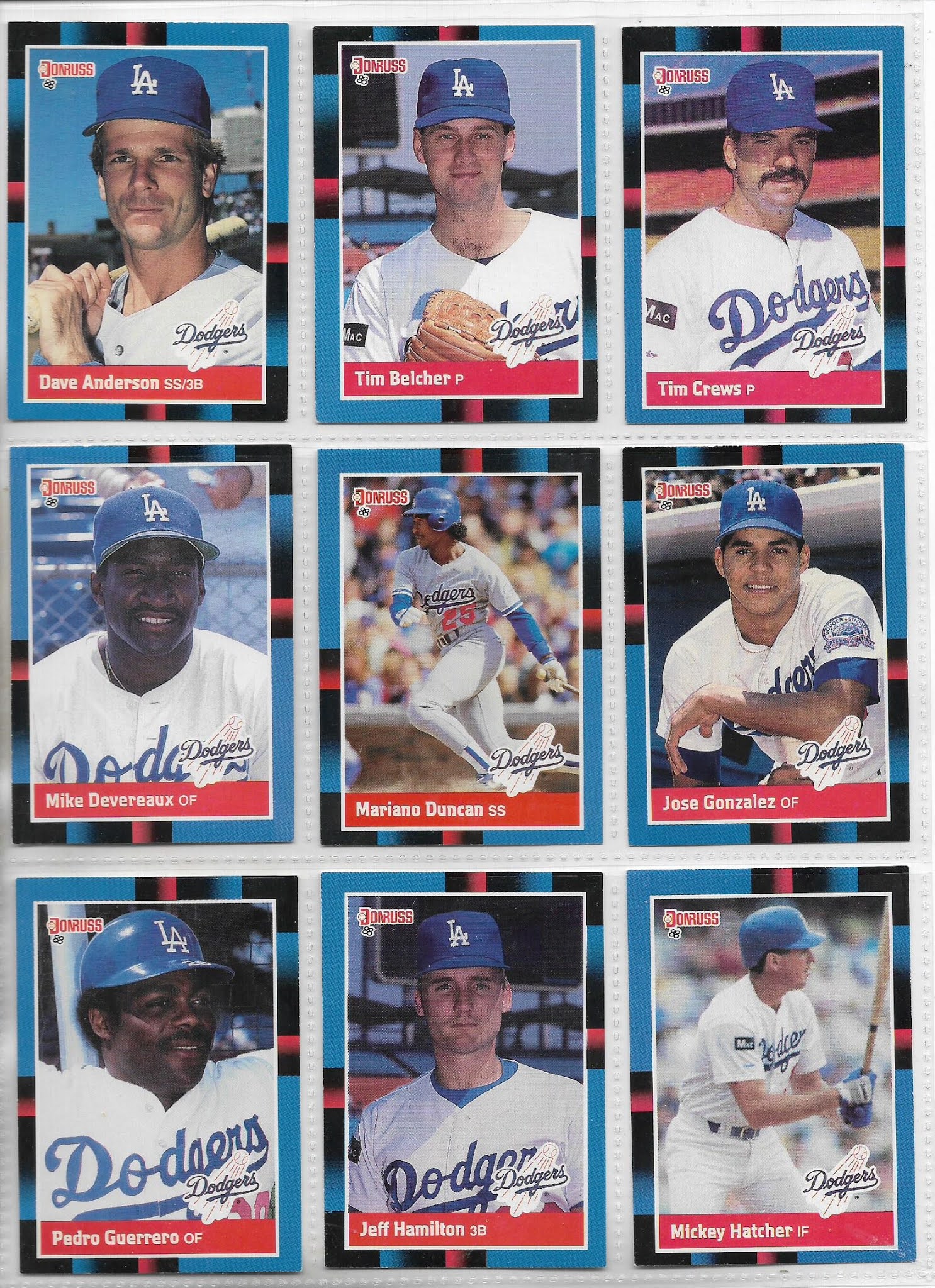 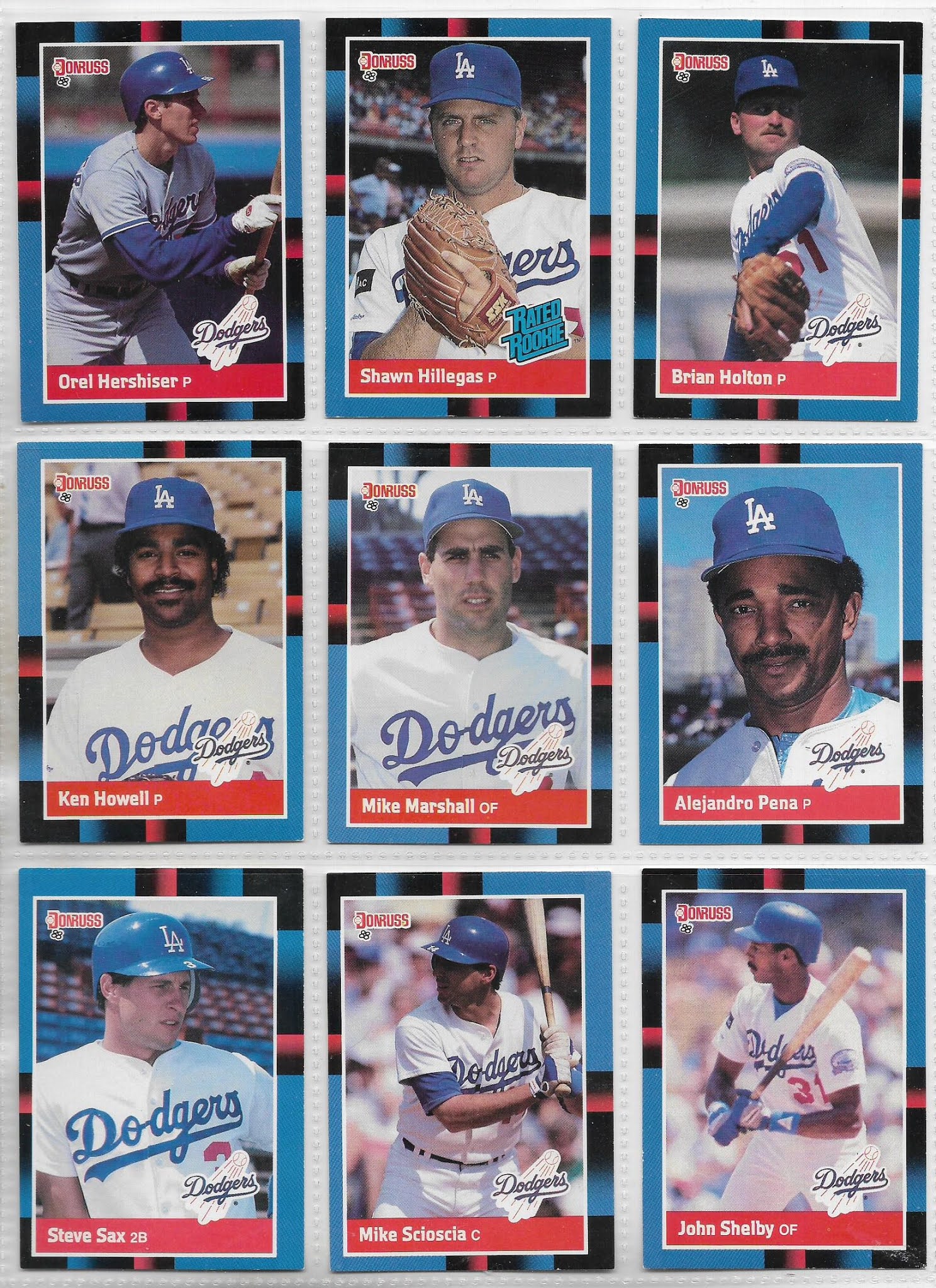 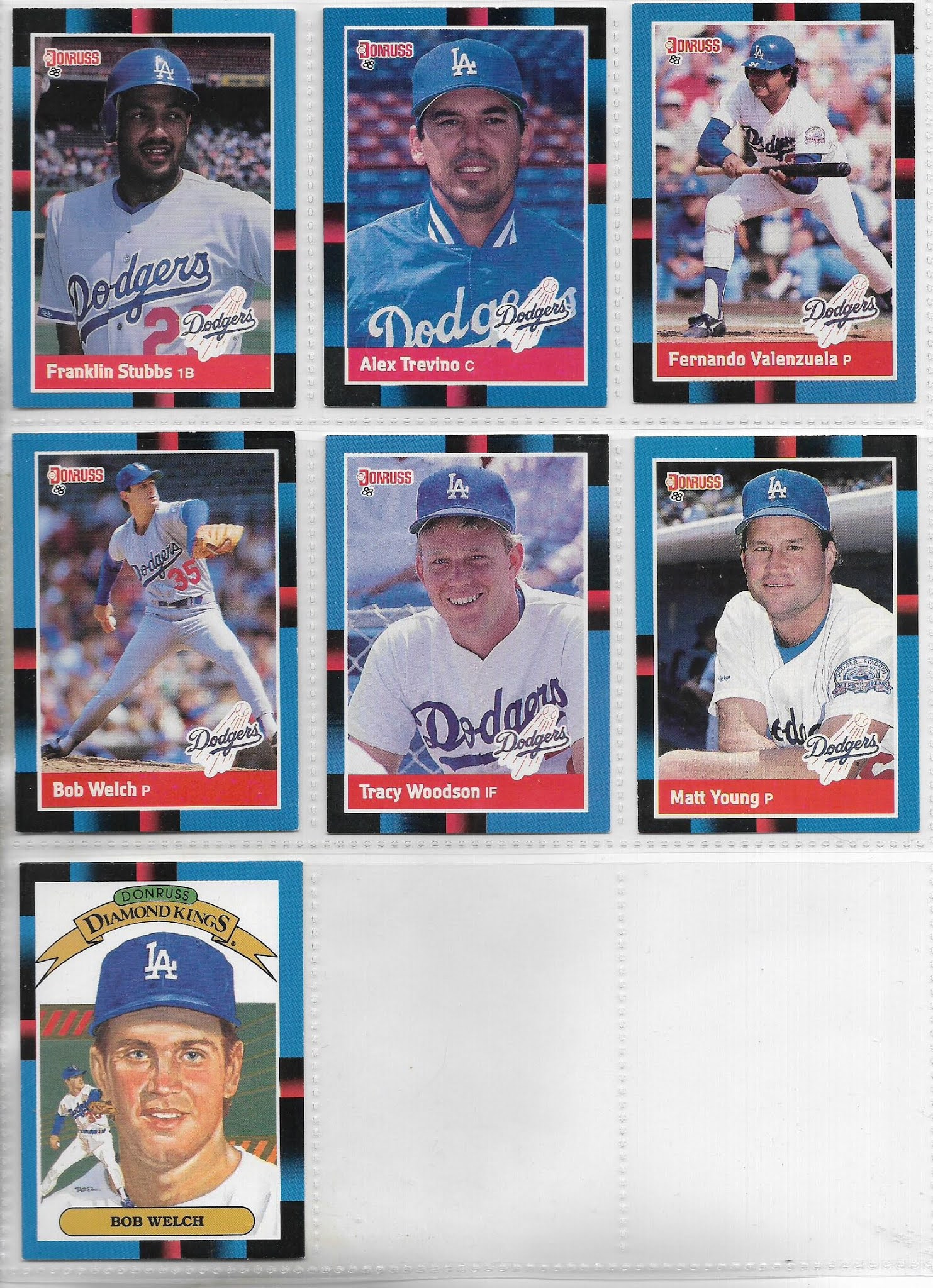 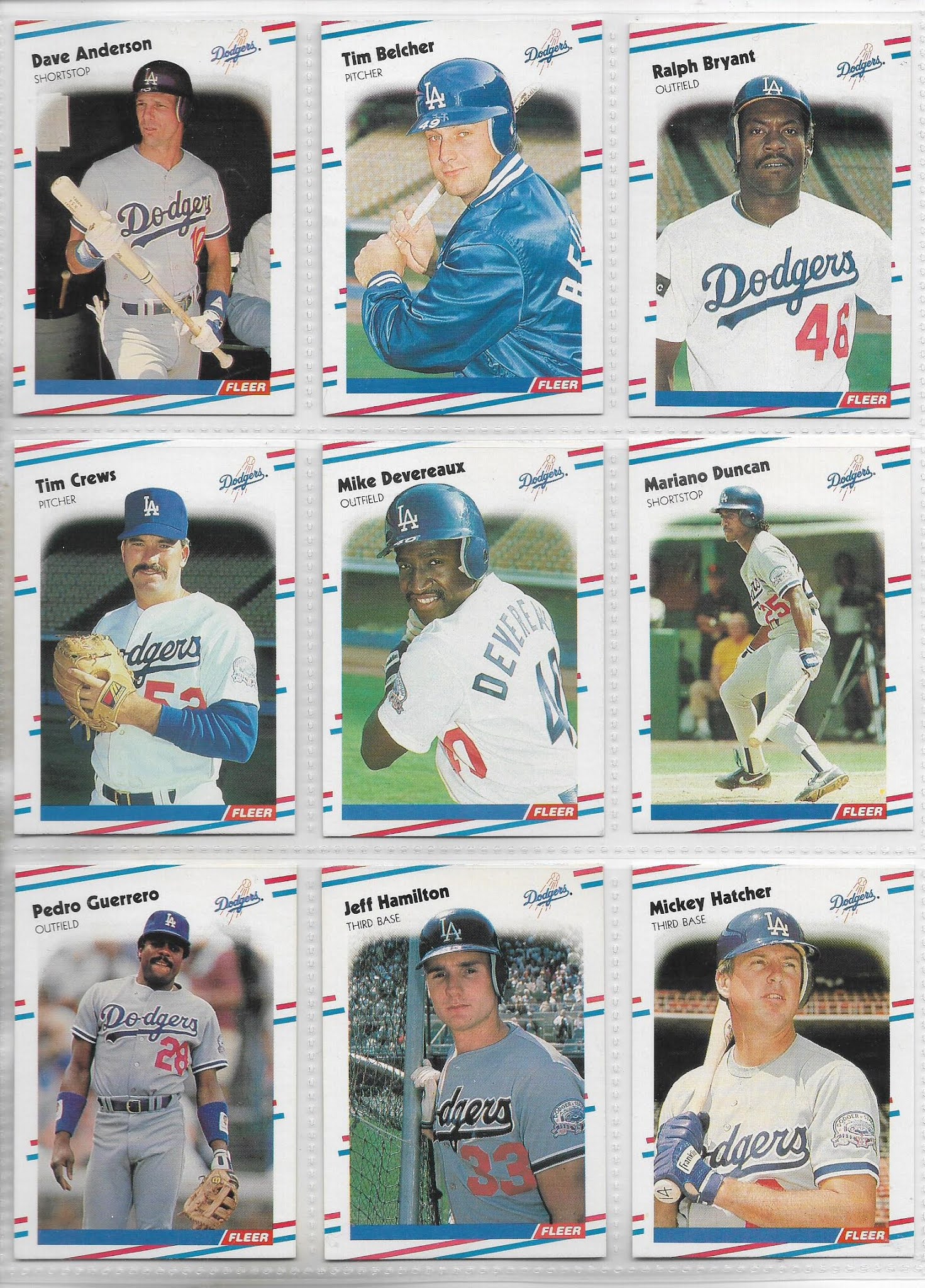 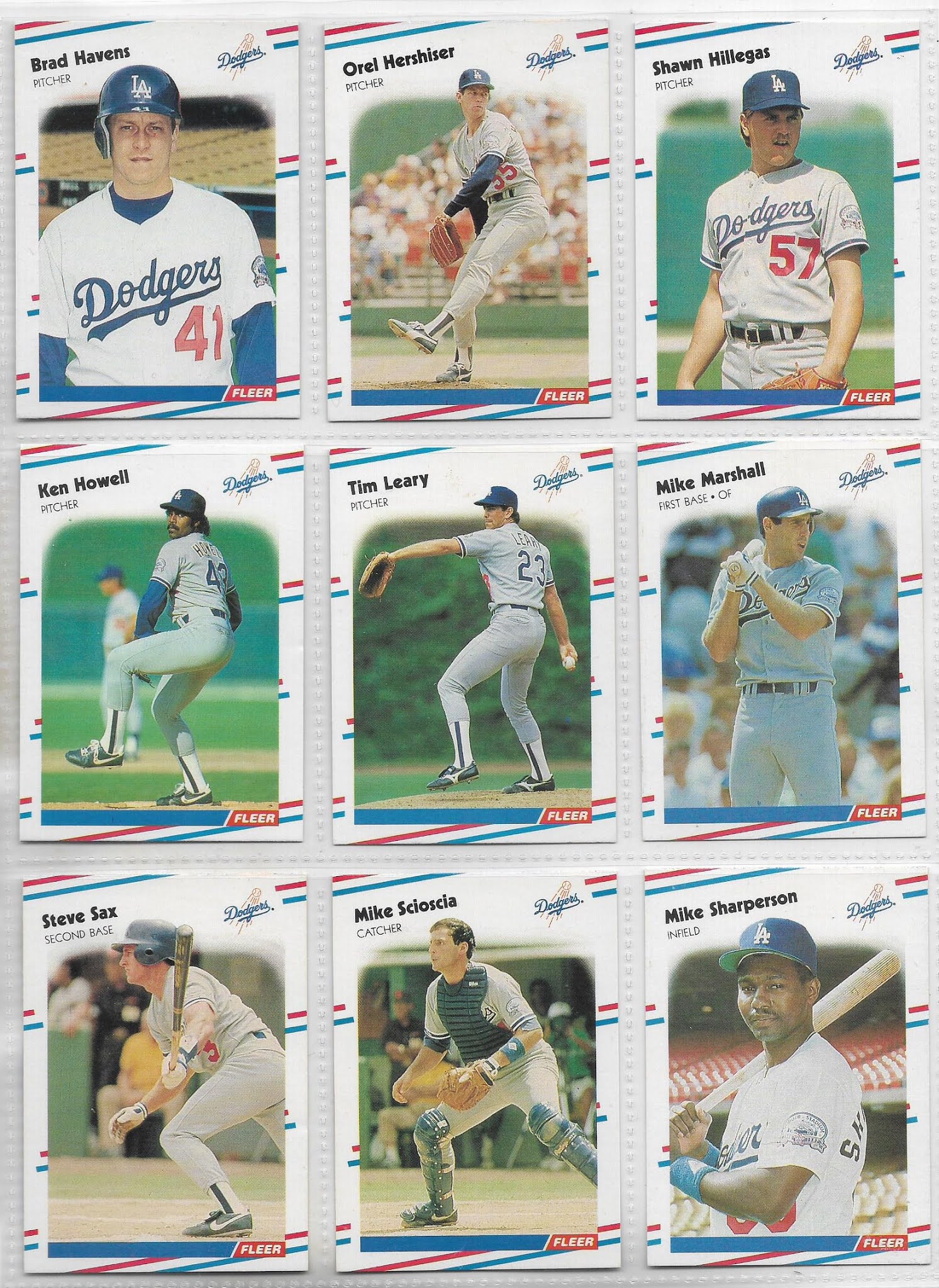 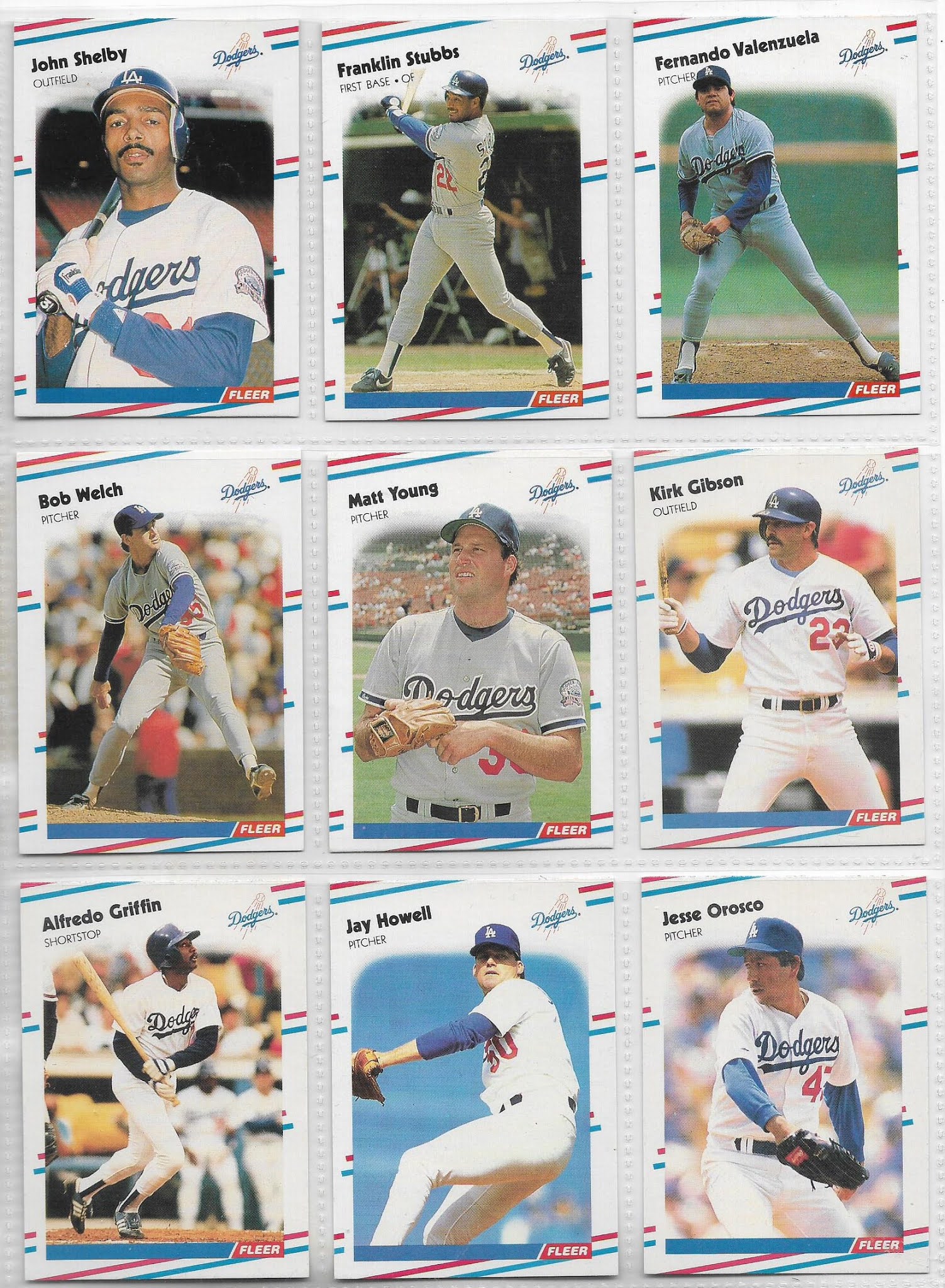 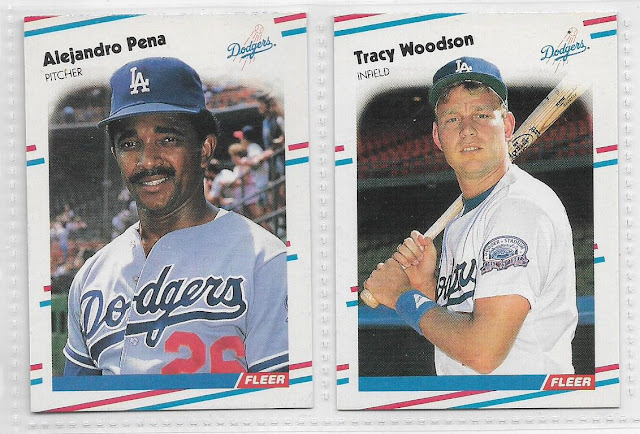 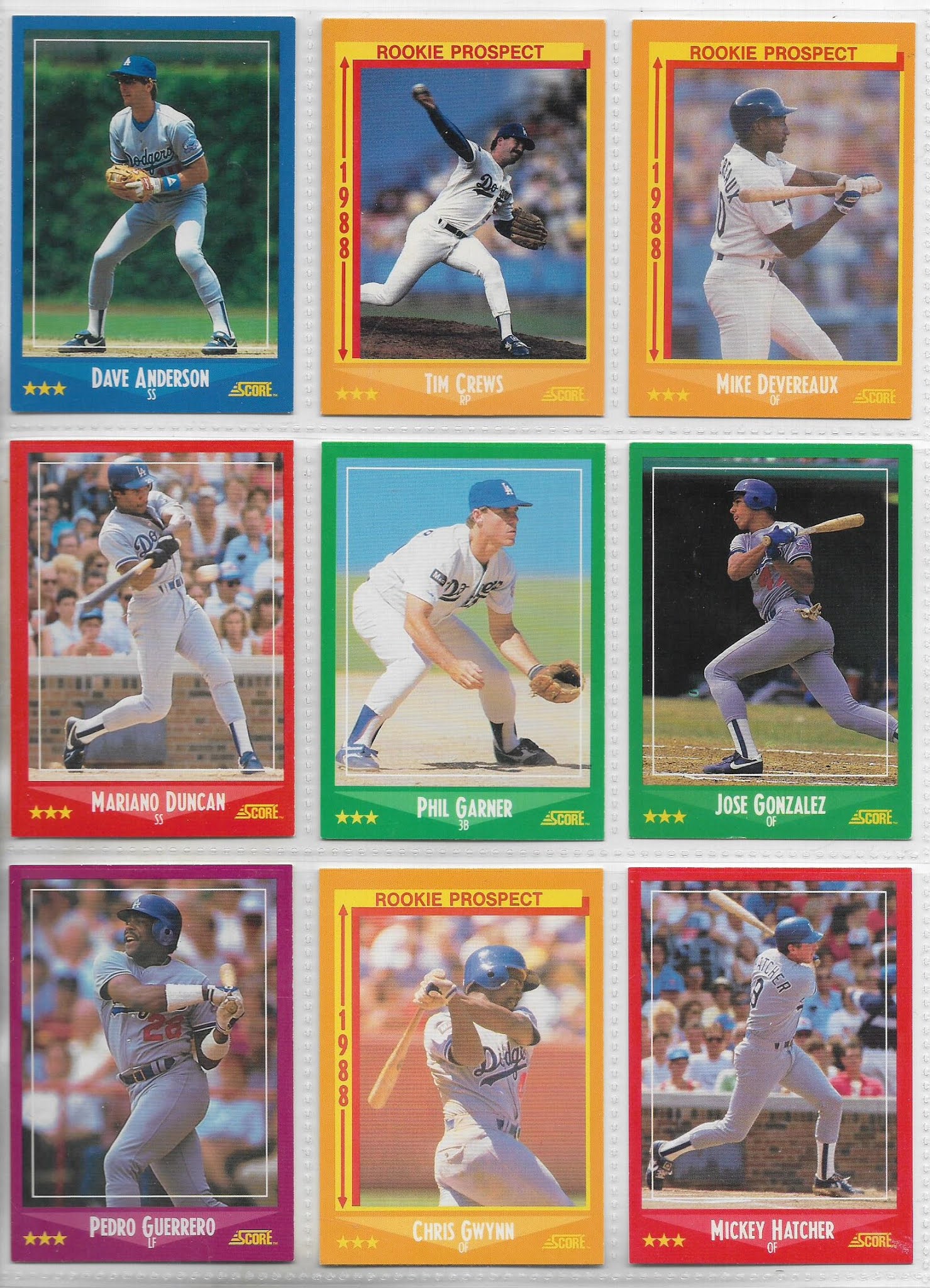 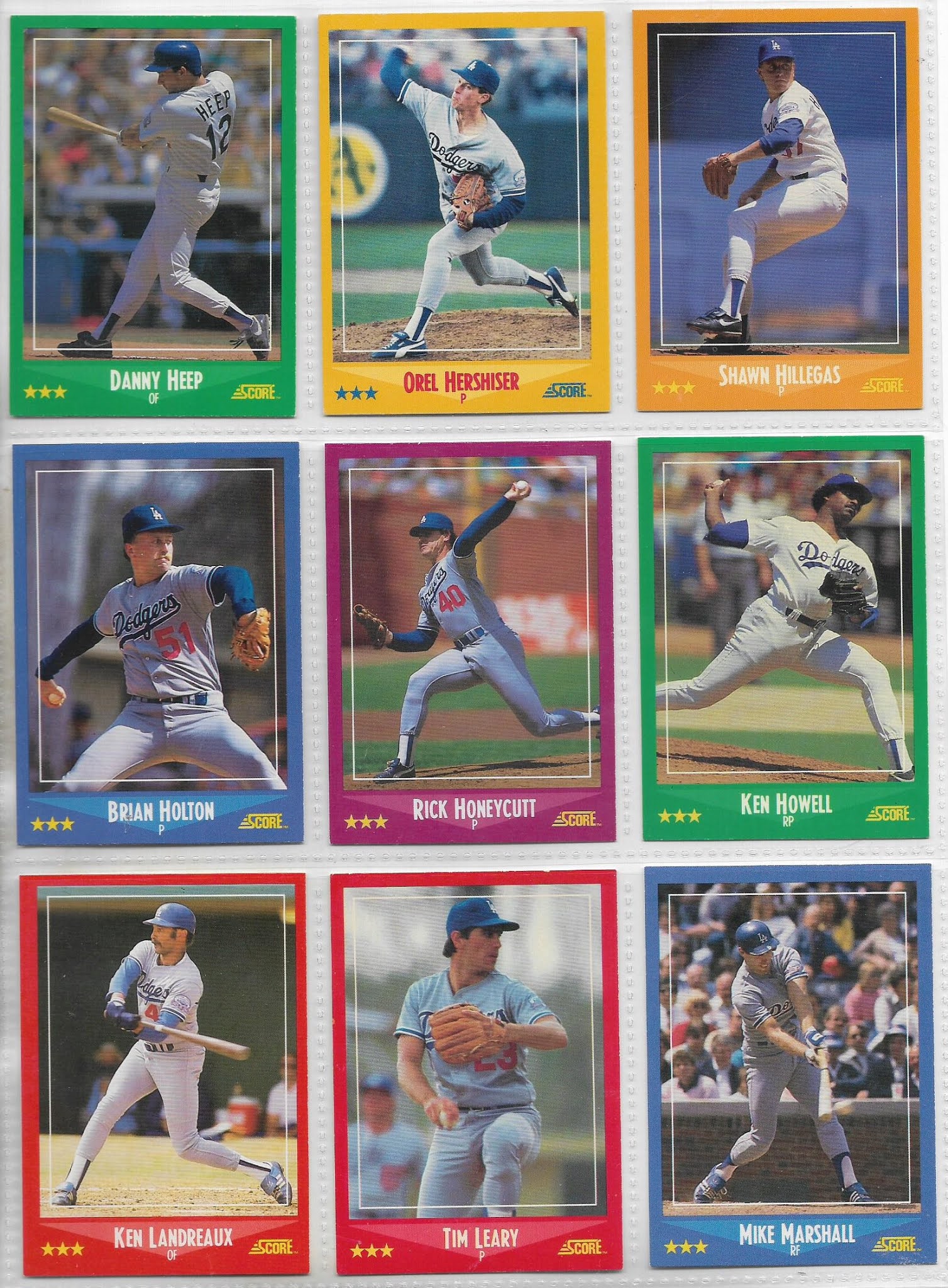 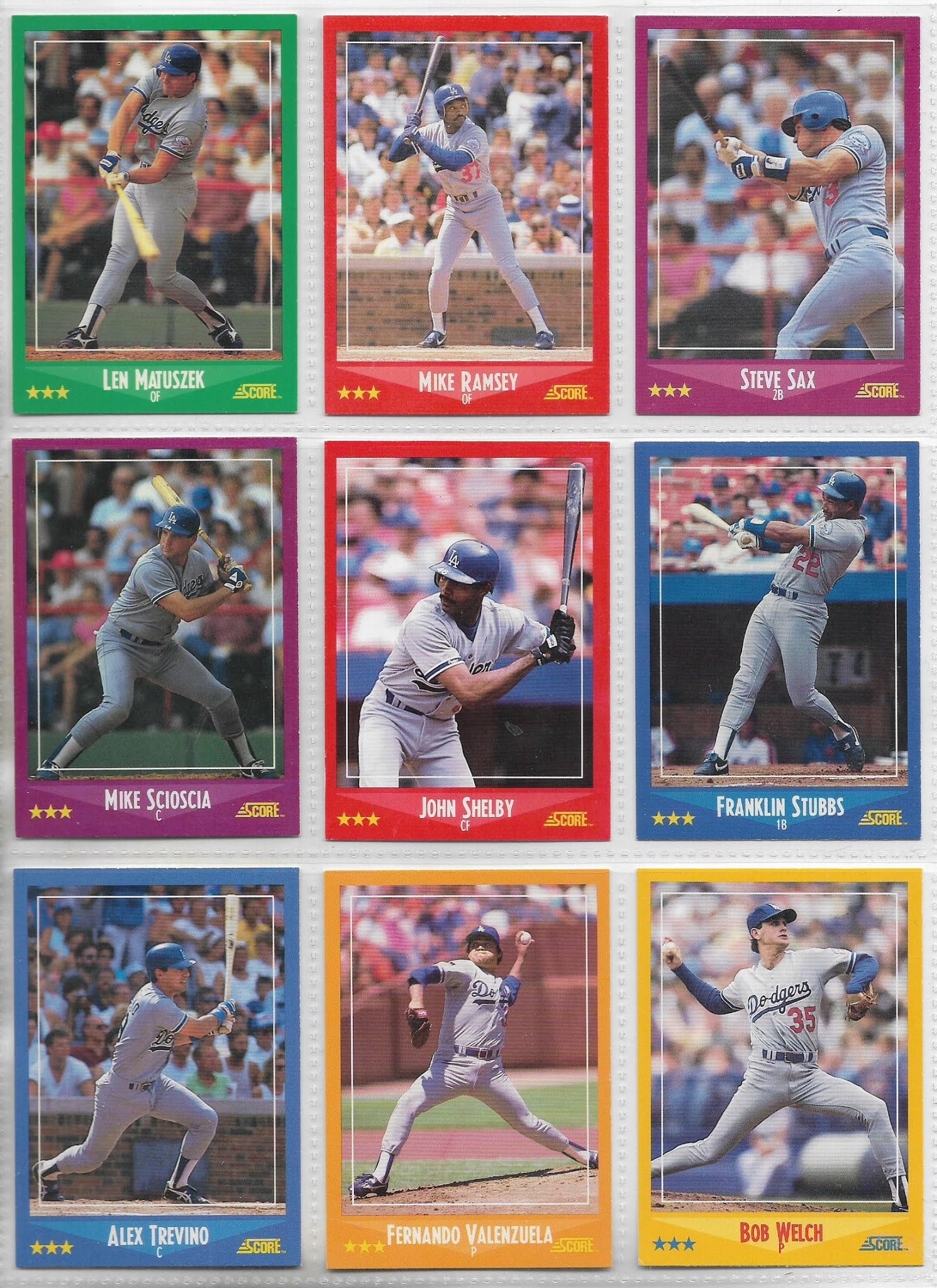 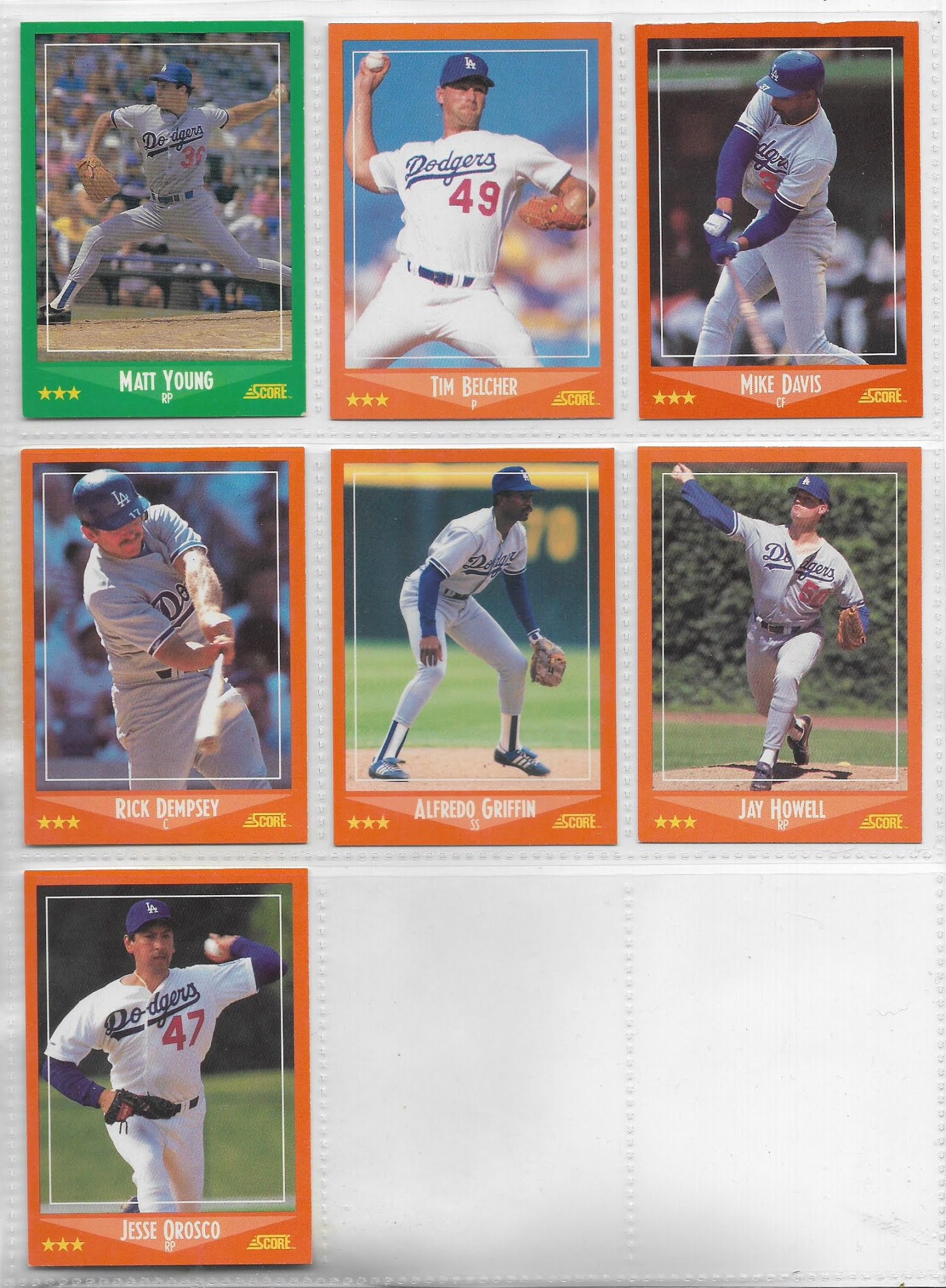 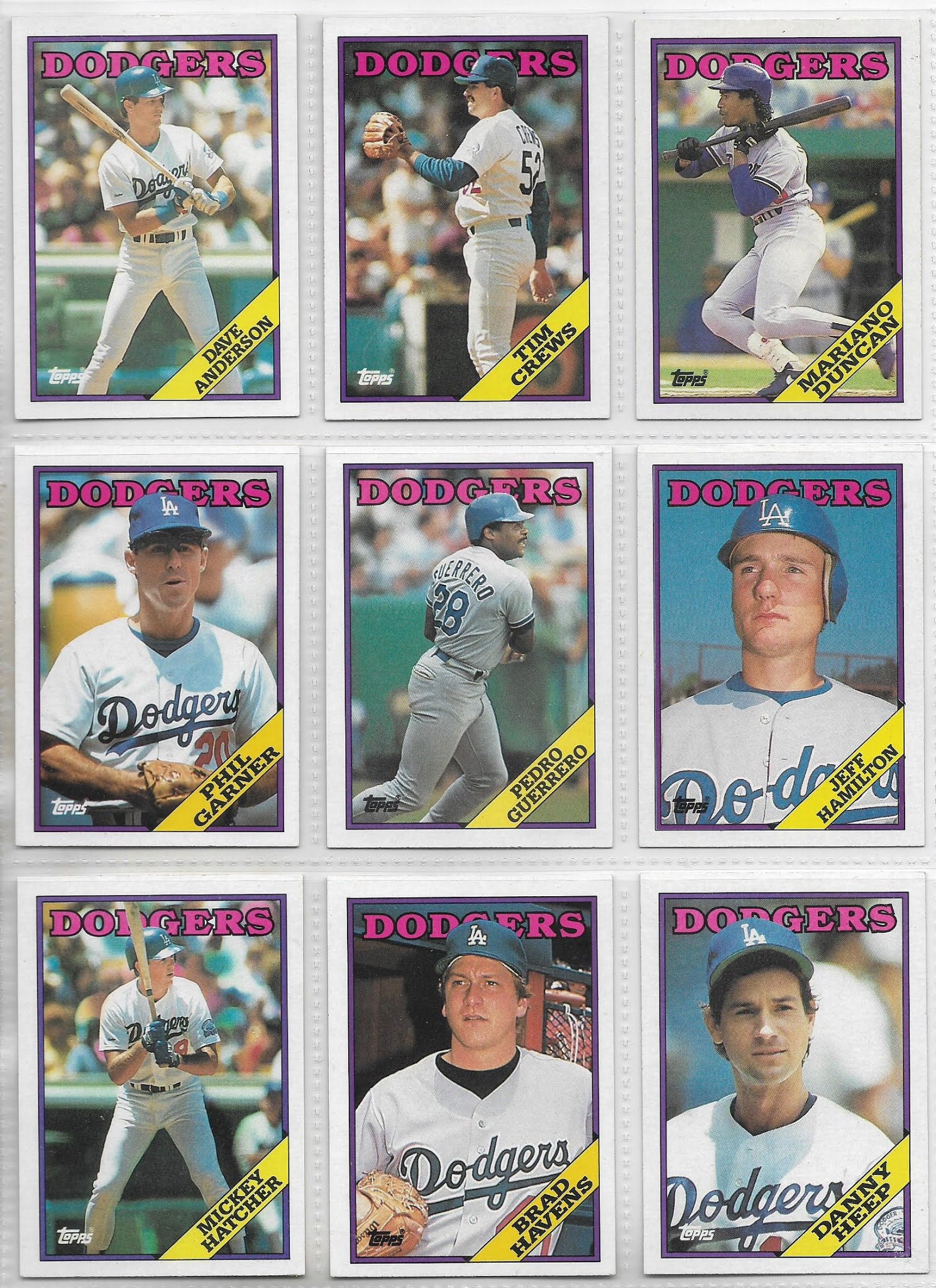 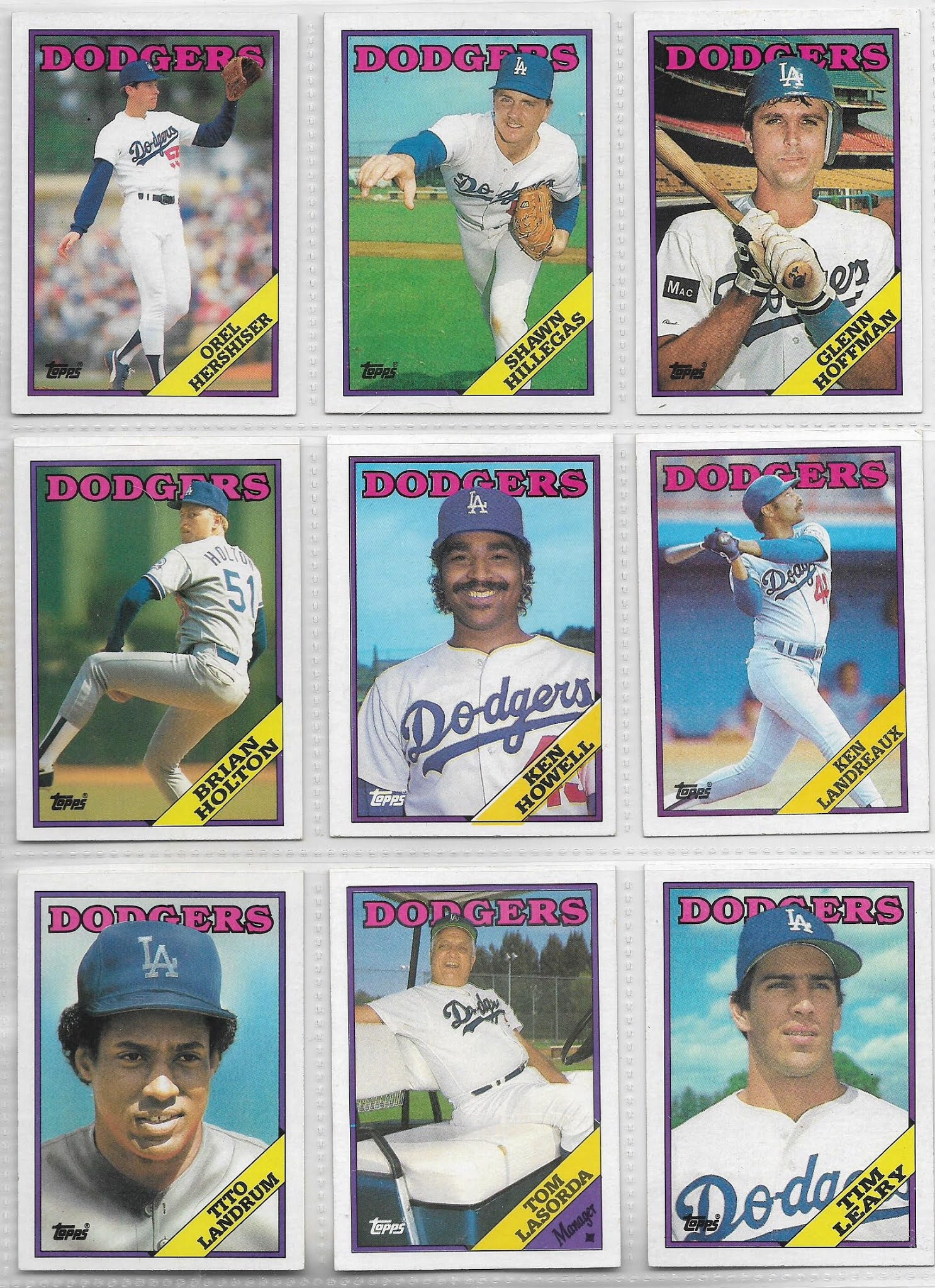 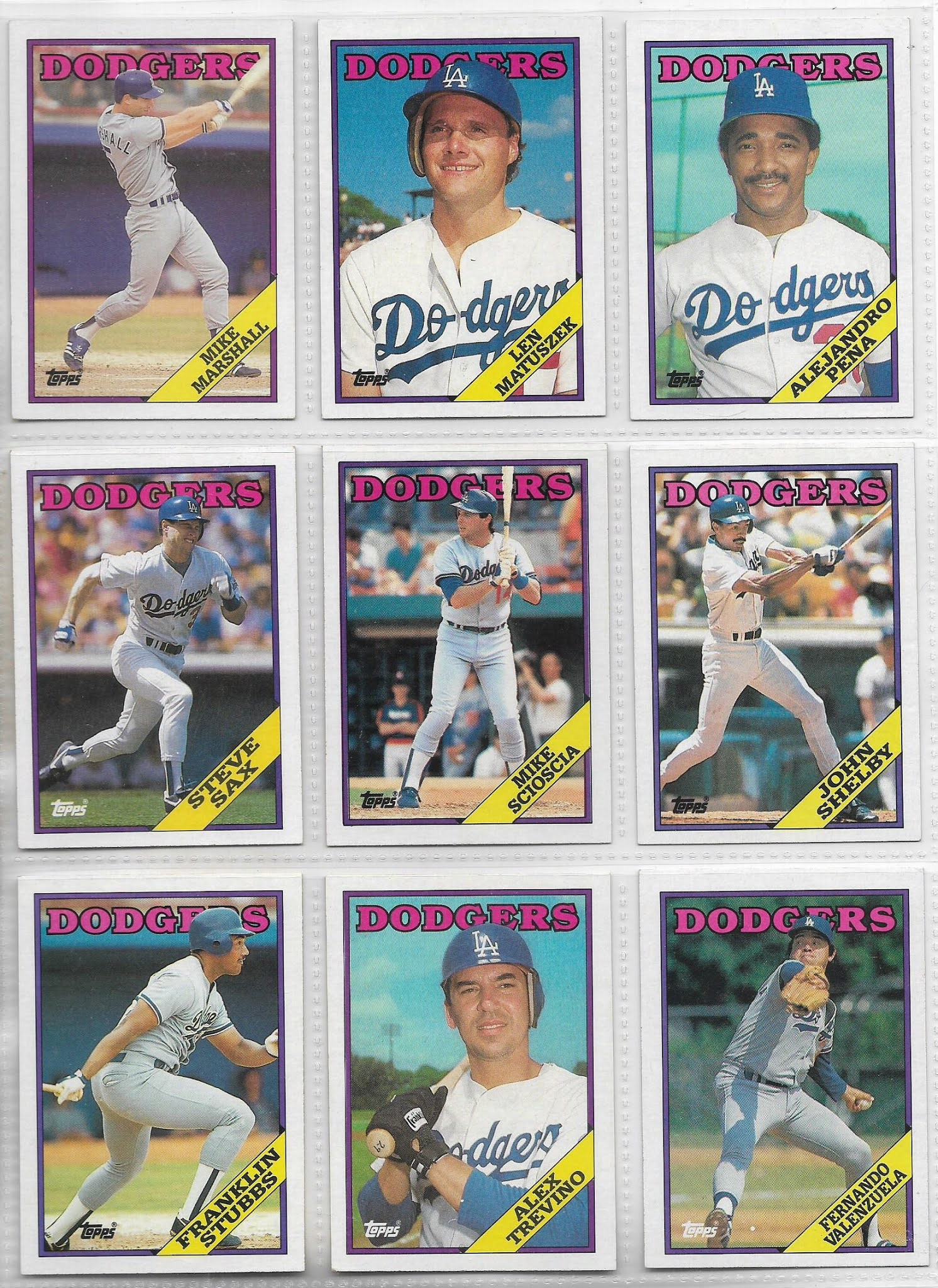 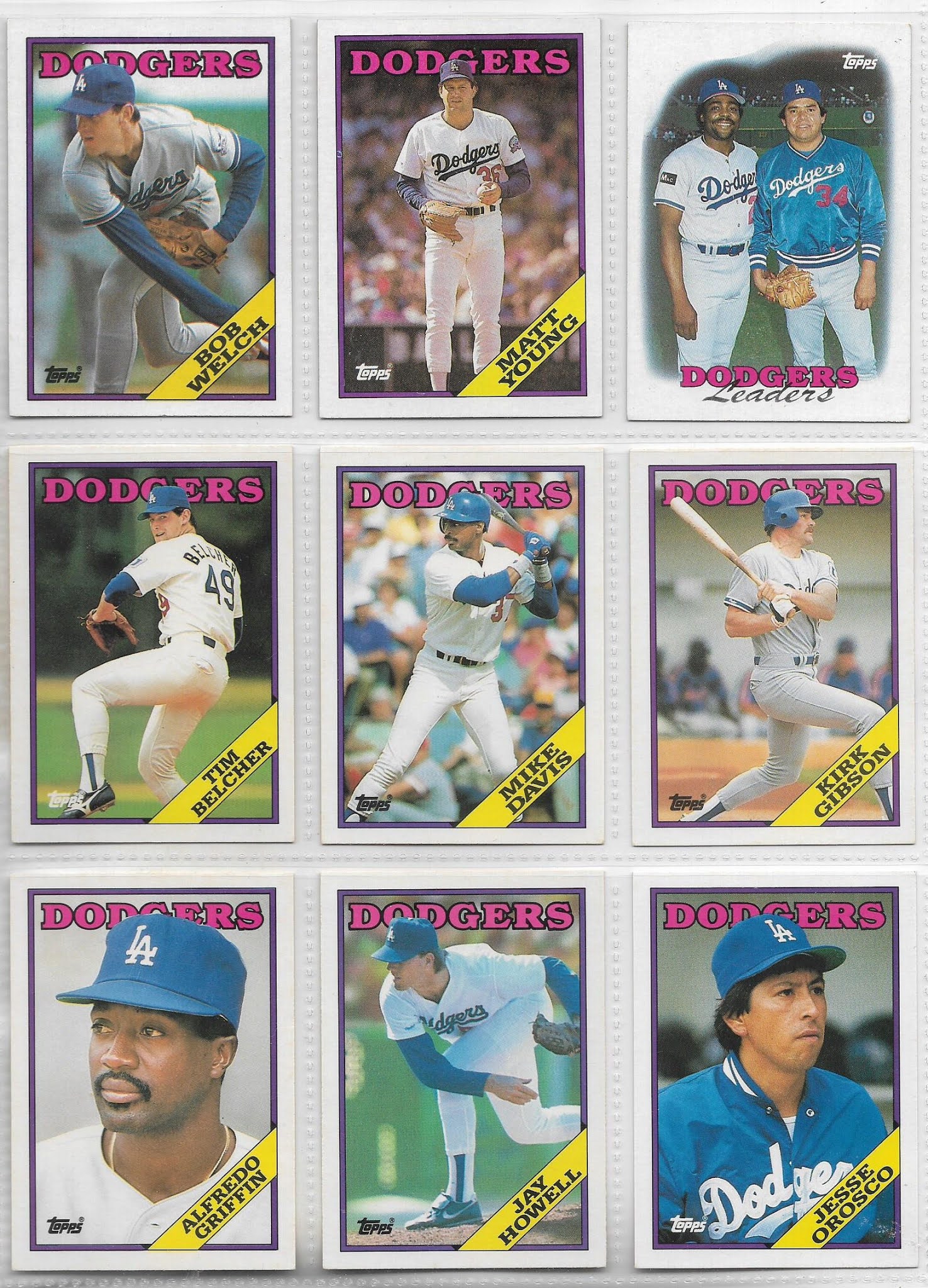 That's Topps (sorry about the dog hairs, they're everywhere).
I added the Traded sets onto the end of each, for those who had Traded sets. Donruss didn't, although it did have its Opening Day set, which included updated players like Kirk Gibson and Alfredo Griffin. But since it also mixed in established roster guys, I skipped it.
Also, you eagle-eyed viewers may have noticed no Kirk Gibson card in the traded portion of the Score set. This was a shocking discovery for me when I was pulling cards. I know I have that Gibson card, but it's nowhere to be found.
OK, so after scanning all that, I went through each checklist to see who had what and who didn't have what. Some highlights:
DONRUSS
Donruss and Fleer have smaller checklists than Score and Topps. For Donruss, it does not include Phil Garner, Brad Havens, Danny Heep, Ken Landreaux, Tim Leary and Len Matuszek. Tim Leary is probably the most glaring omission. Leary shows up in all three other sets. Donruss is the only set to include Tracy Woodson in the base set.
FLEER
Fleer does not include Garner, Jose Gonzalez, Heep, Brian Holton, Landreaux, Matuszek and Alex Trevino. Also, Alejandro Pena does not show up until the Traded set, even though he appears in the base set for Donruss and Topps. Fleer is the only set to include Ralph Bryant, who was on his way to Japan in 1988, and Mike Sharperson.
Also, in the traded set, Fleer includes Tracy Woodson but skips Mike Davis.
SCORE
Score is the only set to include Chris Gwynn (as a rookie prospect) and Mike Ramsey. It's also the only set to include Rick Honeycutt as a Dodger, which leads to an interesting card back, as we'll see in a minute. Score does not include Tim Belcher until the traded set. It also does not include Brad Havens, Jeff Hamilton or Alejandro Pena. It's the only set not to feature Hamilton.
TOPPS
Topps is the only set to include the manager, Tom Lasorda. Neither Score nor Fleer had much use for manager cards during the '80s, outside of Fleer in '81, and Donruss dropped them after its early years. Topps is also the only set to have cards for Glenn Hoffman and Tito Landrum (in that wonderful airbrushed cap). It does not have cards of Mike Devereaux, the only one of the four not to. And it doesn't have a card of Jose Gonzalez. Tim Belcher doesn't show up until the traded set.
Got all that? It certainly satisfies my curiosity!
OK, now for the usual rundown, covering all four sets:
Favorite card runners-up: 5. Belcher-Fleer, 4. Valenzuela-Donruss, 3. Gibson-Fleer Traded, 2. Hershiser-Topps
Favorite element on the back: 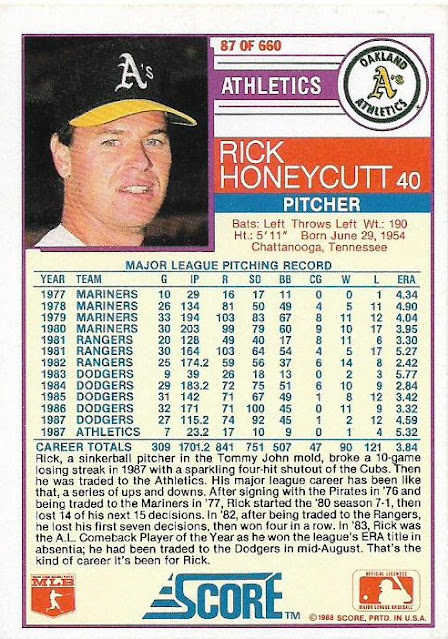 Rick Honeycutt is 100 percent a Los Angeles Dodger on the front but 100 percent an Oakland A on the back. I guess Score didn't want to go through the ghastly airbrushing fiasco that Topps did with its 1988 Rick Honeycutt card.
Notable error cards: The Dodgers escaped appearing on the most notable errors in 1988 sets. They don't even have minor errors.
Most interesting card: 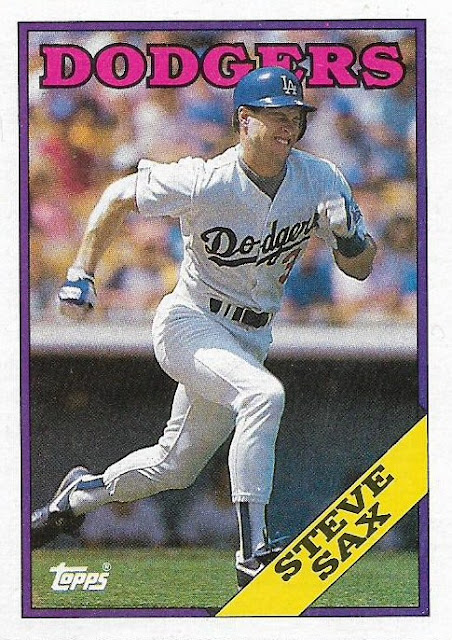 I have often wondered what Steve Sax thought of this card. It was not very nice of Topps to portray him as a kid running to the bathroom in mid-accident.
Team's claim to fame: They won the World Series in 1988 over the big, bad A's. Also, as I've mentioned before, the Topps Dodgers set has a whopping nine players with a last name starting with "H". Score has seven and Donruss and Fleer have six.
Players I've talked to: Sadly, not a one. But if it means something, I do have items autographed by both Guerrero and Hershiser that are addressed "to night owl".
Favorite card in the set: 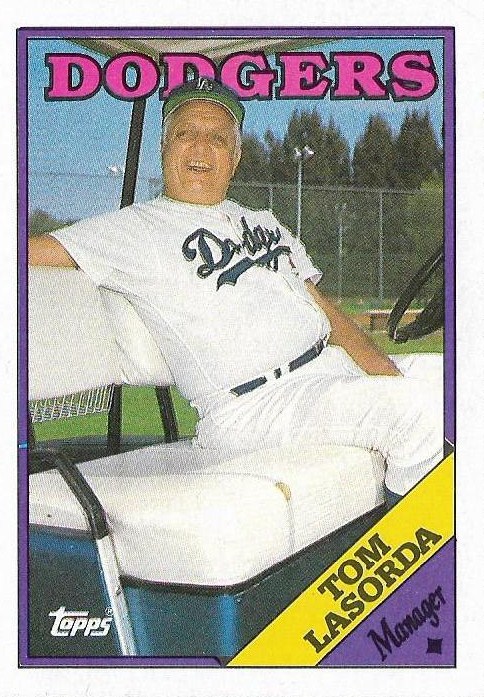 Was there any doubt?
Dave Roberts was just the third Dodgers manager to win a World Series, following Walter Alston and Tom Lasorda. Alston is long gone, but Lasorda is still around. Outside of one brief video, I haven't seen anything on Lasorda's views or reaction to the Dodgers winning the Series this year.
I'm sure he's enjoying it though.
I think even Tommy was done talking about 1988.

Kevin said…
I build sets for each year In my collection by taking the Topps set and adding any players from the other sets Not in the Topps set. From 1983 to about 1989, Donruss was the king of deeper rookies, lots of players had their only cards in Donruss sets, Fleer tarelybissued anybody that wasn’t in a Topps set, maybe a few a year and Score would have a lot of players like Rick Honeycutt, traded in mid-season but would still have a card with their old team.
November 2, 2020 at 8:25 PM

Jeremya1um said…
That is what was frustrating about the World Series this year. Everyone was saying the Dodgers hadn’t had a title since 1988, but Tampa has NEVER won one. It was like everyone was rooting for the Dodgers because they hadn’t won since ‘88, but nobody cared about the Rays or wanted them to win. It was nice to see Kershaw and Seager and Bellinger finally get rings, and the Series was won on how the games were played, not who deserved a ring more. One day I’ll get to say the Rays have a title and look back on it.
Congrats on completing the ‘88 run. That’s impressive and looking at my want lists, that’s hard to do, even in a junk wax set. Hope you can complete some more years.

steelehere said…
Chris Gwynn and Jack Savage were on the two player prospect cards in 1988 Fleer.Base set. (I know I’m being the annoying eagle eye commenter again).
November 2, 2020 at 9:46 PM

night owl said…
I disregarded cards with more than one player featured. So that's why I didn't think about that card when mentioning Chris Gwynn.
November 2, 2020 at 10:42 PM

bbcardz said…
I for one am not tired of hearing about the '88 Dodgers but it sure is nice to add the 2020 Dodgers to the conversation. fwiw, I've briefly spoken to two of the Dodgers pictured above and even took a picture with one of them a few years ago (Valenzuela).

CinciCuse Bill said…
That Topps Lasorda card is one of my all time favorites!
November 3, 2020 at 7:16 AM

Fuji said…
Yeah... the Lasorda is a classic and my favorite card of the post. Lots of great cards in these team sets and I like how the Donruss and Fleer colors go with the Dodgers. It's cool that Hershiser go hooked up with nice action shots... even if his Donruss was zoomed in a little too much (they took care of Fernando on his bunting card).
November 3, 2020 at 10:04 AM

BaseSetCalling said…
88 Fleer is such a happy set. 88 Donruss is like Darth Vader telling you today’s baseball scores. 88 Topps is the Professional set telling the kids to shush. 88 Score is like a kid in a candy store.