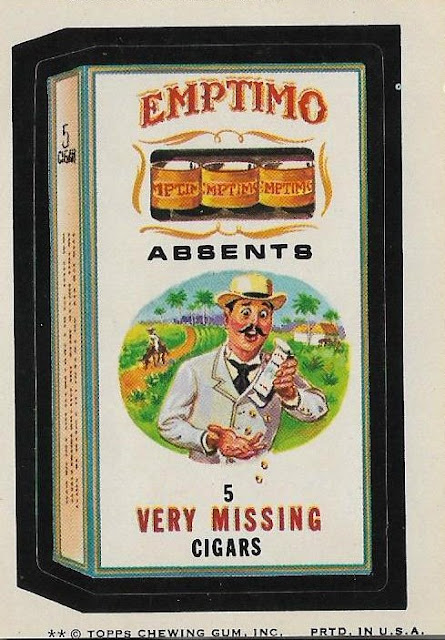 I made my podcast debut today.
A week or two ago I realized that with so many people in the hobby being interviewed for podcasts, I probably should get myself on one of those shows.
I'm not in the habit of listening to podcasts. My commute to and from work is about 3.5 minutes, there's not much need for long-form listening entertainment. But I'm aware of how popular they are. So, I put the word out one day that I was interested and before I knew it, I was lined up for three different ones.
We'll see how the other two go, but the first one is up and it's OK, if you like listening to a collector blather about 1975 Topps and Ron Cey. (OK, I talk about a little more than that). It was nice to be interviewed -- I'm so used to doing the interviewing -- and I appreciate Jeff taking me on. He even paired me up on the podcast with former MLB reliever Dave Veres!
One thing we did not talk about on the podcast is my fondness for Wacky Packages stickers. Those stickers came out at the exact same time I was buying baseball cards for the first time and because of that, they mean almost as much to me as '74 and '75 Topps baseball.
I've mentioned that I'm trying to pick up as many Wacky stickers that I remember from my childhood. I have about 25 or so.
I recently participated in Johnny's Trading Spot's Bingo game and some Wacky's arrived as my prize. I barely knew what I was doing in that game and I didn't win the big prize, but it was nice to get some old stickers from a time when we still could poke harmless fun at a corporate product. 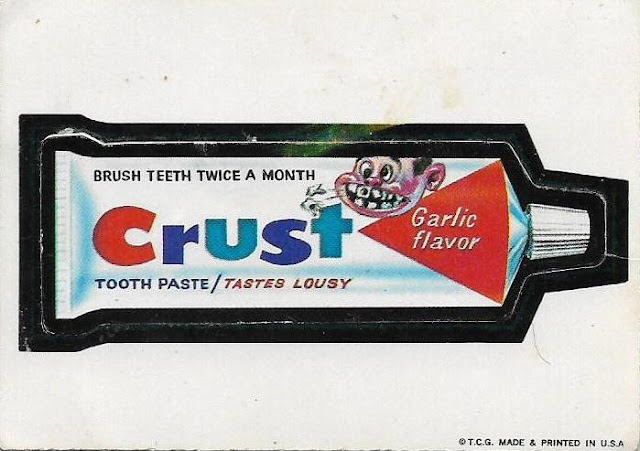 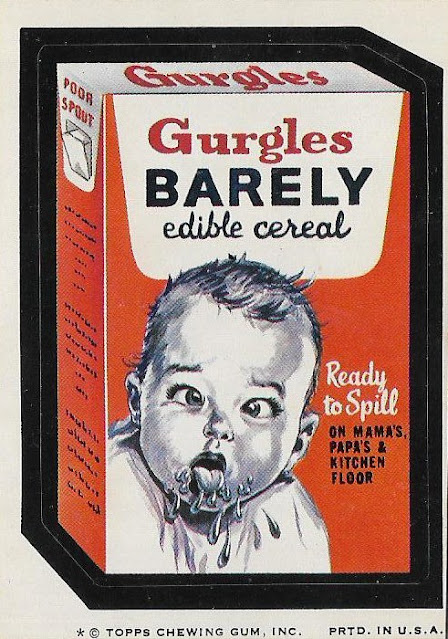 This one is from the 7th Series, issued in 1974. I had it confused with a sticker from the 2nd series with a similar name (Wacky's did this a lot). 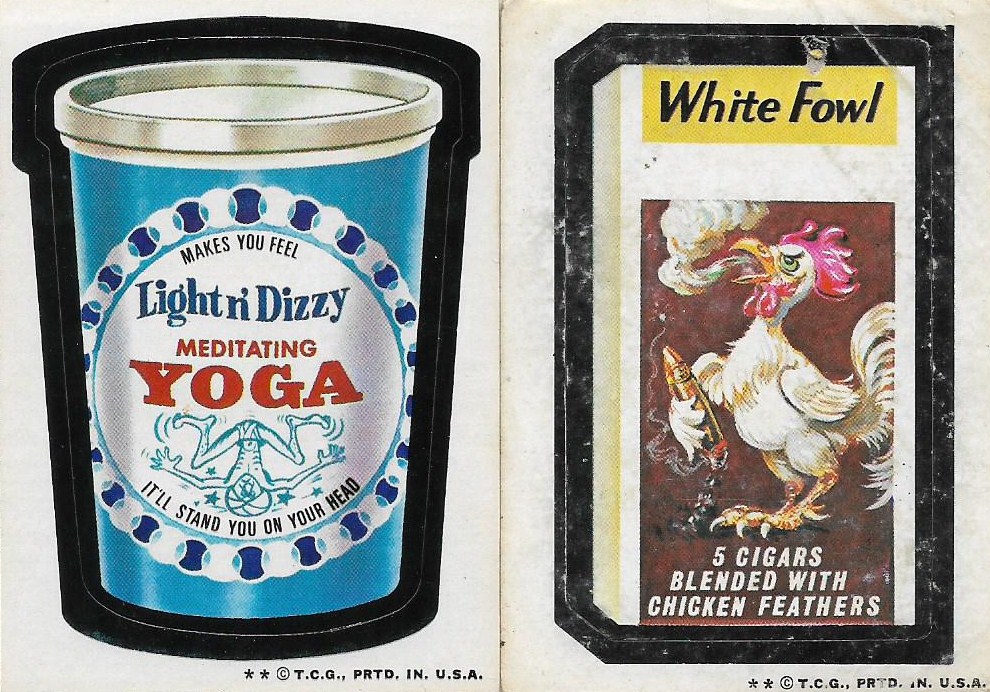 He also sent two stickers from the 5th series, which was issued in 1973 and 1974. Neither of these were needs because -- as I'll mention later -- it turns out the 5th series is what I had the most of in my collection when I was a kid. 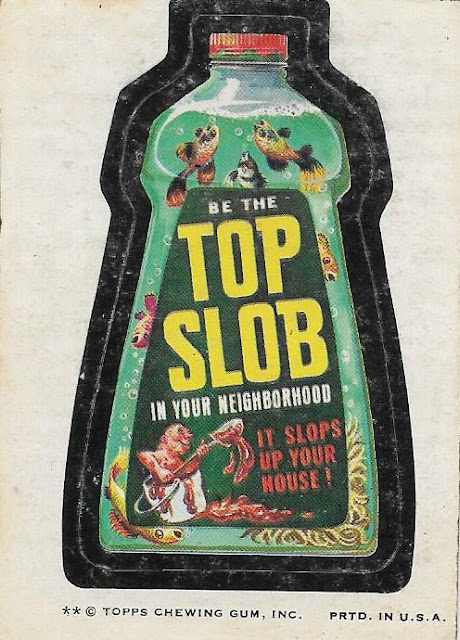 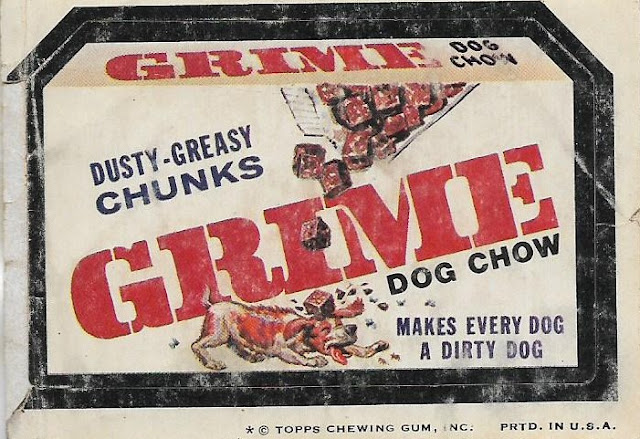 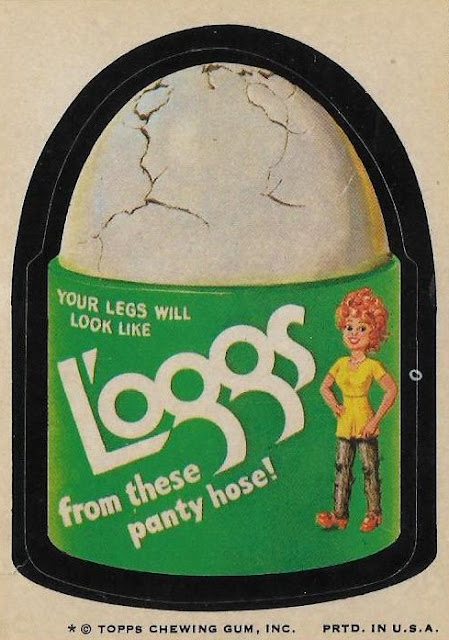 These also are all from the 7th series, issued in 1974. "Top Slob" and "Grime" are appropriately named given their condition. "L'oggs" is less worse for wear and it's the one here that I totally recall when I was a kid and most appreciate receiving.
Topps' Wacky Packages issued 12 series through 1973 and 1974. They are the stickers that I was buying when I was a kid (I have faint memories of some of the 1975 stickers, but by then I was fully into baseball).
I had never looked into the Wacky Packages checklists -- preferring to grab stickers from memory. But Johnny's mailing got me to look up the checklists. When I did, the 5th series from 1973/74 jumped right out. I already have 11 stickers from the 32-sticker set and those were obtained all based on memory of what I saw.
I am going to put my Wacky wants on the blog soon -- I'll probably place them separate from my other wants as I know few readers collect Wacky stickers or even know what they are. I don't expect to receive much in trades, but you never know what will come along.

John also sent three checklist cards from the 9th series (1974). The backs have puzzle pieces that form the "Hookey" sticker (Topps hockey cards). I think it takes eight checklists to complete the puzzle. But I'm not into collecting the puzzle pieces.
Wacky Packages has tons of variations but I don't care about those either. This is all about my childhood here and that's how it will stay. 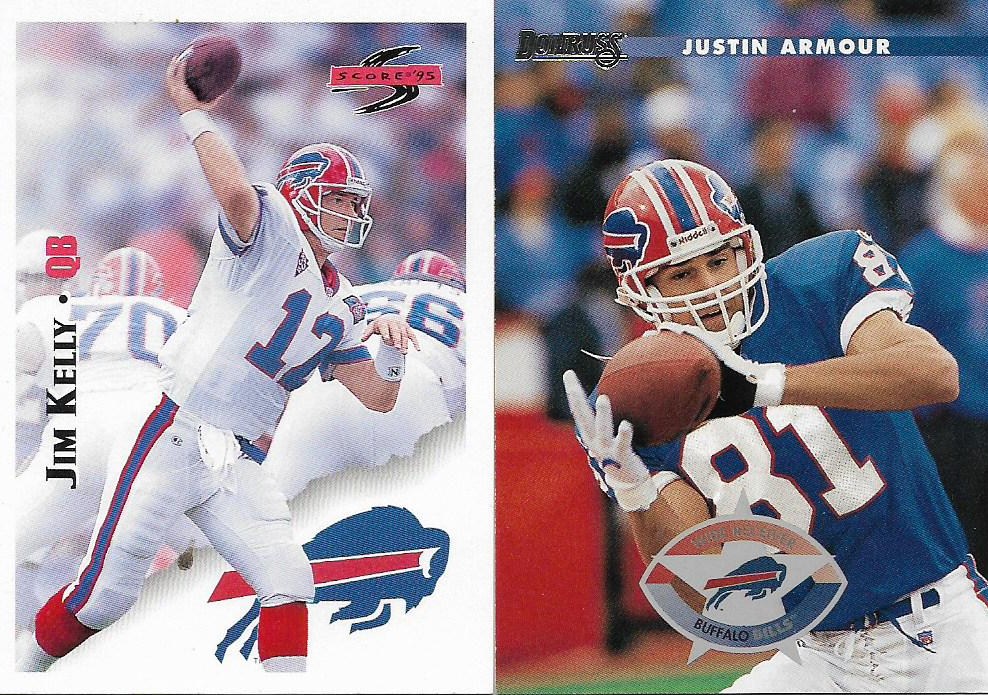 John threw in a couple of Bills cards from the '90s, both are needs.
The Bills just lost to the Cardinals in a gut-wrenching way. But I shouldn't complain, it's been since the '90s since they've been this good.
OK, so there you go. I spent my podcast interview talking about nothing except baseball and then I come on here and show you no baseball.
That's me. Lots of interests.
All right, I've got a few days to brace for my second "new radio" gig.

RunForeKelloggs said…
We collected Wacky Packages a lot in the mid-70s. Thanks for showing them. My cards survived but somehow I never stored the Wacky Packages out of the way and they didn't survive. That could be a great project for the future because they are awesome. Congrats on the Podcast.
November 15, 2020 at 8:00 PM

BaseSetCalling said…
I have loved Wackys all my life. I occasionally check to see if new ones are around, but that has been a few years now. KISS KAT was a favorite of mine from maybe 5 years ago. A ‘political’ insert set a few years ago was amusing too. Usually I find a couple-three favorites from a 55 sticker release.

My “collections” of the oldest ones are pretty poor however, for a basic reason that has also been true all my life - I stick them on things, and enjoy them that way. I seriously doubt I have any left from the 1970s, but maybe. If you end up with duplicates of “Hipton” I would part with things for one of those.

There was a one-off re-boot around 1990 that I quite enjoyed before the 2000s brought on routine new issues. Those I have plenty of but am always on the look-out for Zenergizer, and PREZ.
November 15, 2020 at 8:11 PM

Fuji said…
Love these Wacky's. Even though I didn't collect these as a child... I'm very familiar with the products. Well maybe not all of them... but at least half of them.

Nick Vossbrink said…
I never saw these as a kid so instead they remind me of Mad Magazine advertisements. Also I just pulled my stack (no idea where I got them from) and discovered that Topps apparently brought them back in 1982. So that sort of destroys any ideas I had of just surprising you with some of them.
November 15, 2020 at 11:37 PM

bryan was here said…
Wackys were some of the first cards I collected as a kid. Even before baseball. I remember having some of the early series ones, like the Crust, Liptorn, and many others. There were also some cartoon car ones like Shovelrolet, Coldsmobile, and Moosetang to name a few. My aunt's mother-in-law gave them to me to keep me entertained while we were visiting. My sister and I got many laughs out of them, so she let us keep them. Many years later, I found some from the '80s (Burger Thing, Soapy Stereo Washman were a couple of favourites). When they rebooted them again in the mid aughts, I got some for my son. He's now 18 and he still has them.
November 16, 2020 at 1:02 AM

CaptKirk42 said…
I love the original Wacky Packages and need to get off my butt and try to get more of them, and complete the checklist puzzles. So what else is new?
November 16, 2020 at 10:19 AM

John Sharp said…
I remember those Wacky Packages as a kid. They always made us laugh.

Bulldog said…
Wacky packages were great. I opened so many as a kid. That Score set is one of my favorites. And should be mad at the Bills. That game was theirs to win.
November 18, 2020 at 12:24 PM