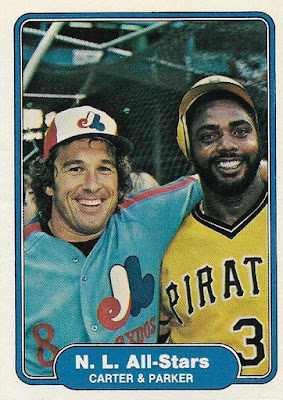 I hadn't planned on putting up a want list for 1982 Fleer until I completed either the 1981 or 1983 Fleer sets. I'm juggling so many card things as it is.

But the 1981 Fleer set is down to six cards -- I received another off the want list the other day. I decided to put the rest of my '81 Fleer wants on my Nebulous 9 list. Yeah, that makes 10 cards on the Nebulous 9 (hence, the name "nebulous"), but there's no way anyone is sending me the 2011 Update Matt Kemp ToppsTown card anytime soon, so it might as well be nine.

So, the end is in sight for the '81 Fleer set and that's good enough for me. The three-legged dog set is now up on my want lists.

I've called 1982 Fleer the three-legged dog of sets since the early days of the blog. The '82 set gets a lot of grief. It's filled with errors, intentional or not. Many of the photos are blurry or dark. The cropping on some of the shots is downright bizarre.

I actually prefer 1982 Fleer over any 1980s Fleer set other than 1984 and possibly 1985. That's how attached I am to that lost set. I guess I just love reclamation projects.

I still need to check my Dodgers duplicates to see whether any can go in the '82 set completion quest. So for all of you people checking out that list right NOW, know that anything listed as a want between the numbers of 1 and 29 is probably suspect.

Where all those binders are going to go, I have no idea.

Chris said…
I'll keep an eye out for any '80s Fleer cards you might need, since I scoured my collection for Dodgers to send you and came up empty. Even when I though I had a couple Traded cards you needed they were the base versions and you only needed gold parallels. I've no idea how that flat rate box I sent you had so many cards that were new to you...but there may be a couple more headed your way. ;)
January 5, 2019 at 11:38 AM

Fuji said…
That's the great thing about our hobby. One man's junk is truly another man's treasure. Although you'd never catch me throwing any 1982 Fleer cards into the recycling bin, I definitely consider it one of my least favorite sets of the 80's. On the other hand, I'm right up there with you when it comes to appreciating the 84 and 85 Fleer sets. Best of luck with your three legged dog set. I'll double check, but I don't remember having any extra 82F laying around. I do have some 82D and 82T though.
January 5, 2019 at 12:07 PM

Doc Samson said…
I agree, Mr.Owl. 1982 Fleer has an undeniable charm for being so low end. Kinda like watching the same bad Bruce Willis movie over and over again, even though you know it's terrible.
January 5, 2019 at 2:34 PM

Peter K Steinberg said…
It's a great project to chip away at and good luck with it. I hope somewhere along the way I run into some Fleer cards that might fill in needs.
January 6, 2019 at 5:29 PM