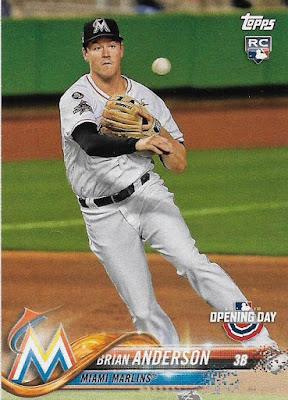 Today is a recovery day for the previous week.

Nothing unusual about that, of course. Last week wasn't the most stressful of weeks but it did contain a variety of challenges that most weeks don't: an uncomfortable conversation about a future uncomfortable task, a long journey to an unknown place, unusual waking times on more than one occasion, discussions with people whose job titles I find intimidating ... oh, and shopping for clothes.

Let's just say I'm smarter than I was before the week started, but I need a break. I need a break if only to let out all the clutter that's been clanging around in my brain that I have had no time to get out.

For example, see the Brian Anderson card from 2018 Opening Day up there?

Do you realize he is the third different Brian Anderson to play major league baseball in the last three decades? 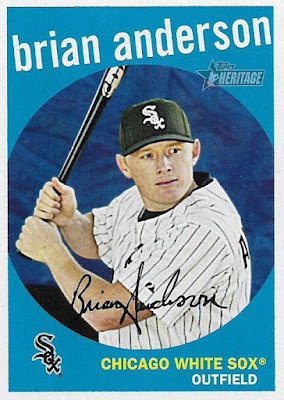 But even White Sox Brian Anderson was merely continuing the legacy begun back in the 1990s. 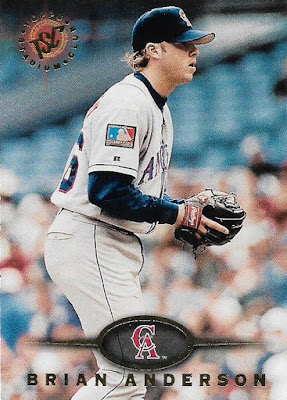 In the mid-1990s there was a pitcher named Brian Anderson. He didn't last for too long, just enough to get in on all the rookie hype that cards like to bestow on newbie players and then get out.

So, yeah, I had that rattling around in my brain for a couple of weeks and it sure feels good to put that onto paper ... er, in blogger.

Names fascinate me. It's one of the reasons why I collect cards, have the job that I do, etc. It's also why I started a blog series called "Spawn" a few years ago, which I haven't revisited for quite awhile. If I did, this player would fit in nicely: 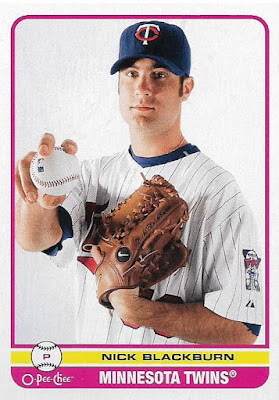 This is Nick Blackburn, a pitcher for the Twins about a decade ago. Blackburn pitched for six years for the Twins until injuries and ineffectiveness forced him into retirement in 2014.

But still that was a long time ago, which is weird when in the same year that Nick Blackburn retired ... 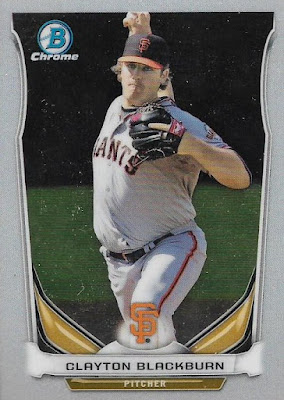 Sure, Clayton Blackburn has never appeared in the majors, but he DID appear in my baseball card sets, including one particularly sneaky card that's found its way into my Dodger binders because of the audacity of someone to put this guy on the same card with Clayton Kershaw.

Still, I wasn't concerned that there was a Blackburn epidemic until the 2018 cards came out. 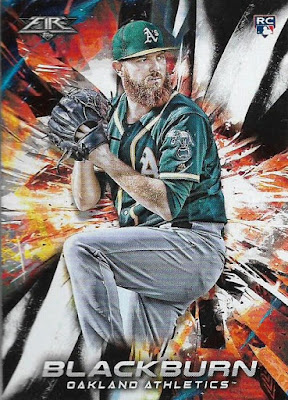 That's the kind of stuff cluttering my mind.

By now you're disappointed because you were quite sure at the start of this post that this would be about me clearing the clutter off my card desk.

Well, you will be rewarded. 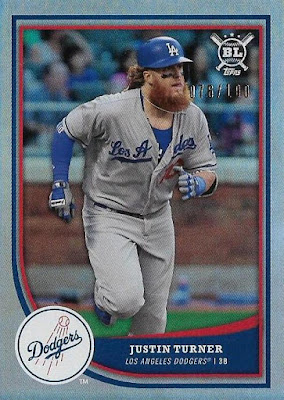 I do indeed have clutter on my card desk that desperately needs clearing, some in the form of received card packages overdue for mentioning.

For example, one from Nick of njwv that I received over the holidays. Nick is a Giants fan who has been harboring this numbered Big League Dodgers card.

You will notice the number is stamped waaay too close to Justin Turner's face. This is almost as annoying as what Topps does with buybacks (yes, right OVER the face, is anybody even paying attention????). But I will just imagine that Justin Turner is saying, "that's right, collectors, 78/100, I'm going to go 78-for-100 to start the season." I'm looking forward to it. 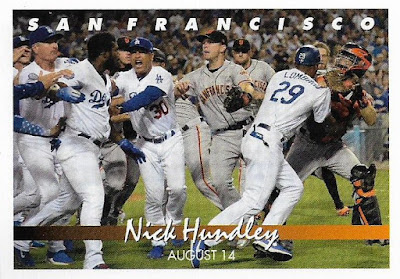 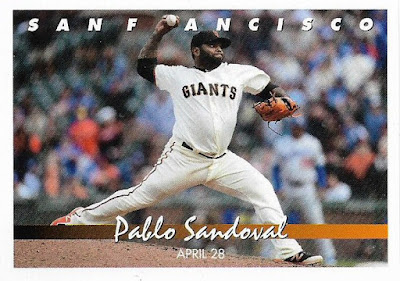 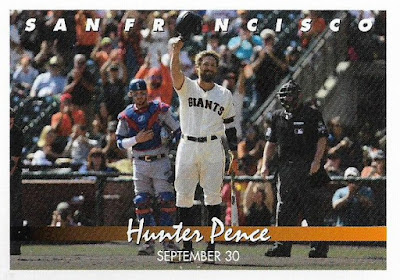 Nick also sent three samples of his custom cards that he created last season -- one for every game the Giants played last year, I believe. They are made in the style of my favorite Upper Deck set, from 1993.

Now, you may think that it's kind of mean to give a Dodgers fan homemade Giants cards, and, yeah, it kind of is, but all three of these cards actually hide Dodger goodness in the background. There are Dodgers in the photo of each card.

The top card shows the famed scrape between Yasiel Puig and Nick "oh my sensibilities have been offended" Hundley. You can see Hundley over to the right, hiding behind his catcher's mask.

The other two cards are actually of Dodgers victories, convincing ones at that in which L.A. scored 15 runs apiece. In fact, the middle card is the noted Pablo Sandoval pitching experience. 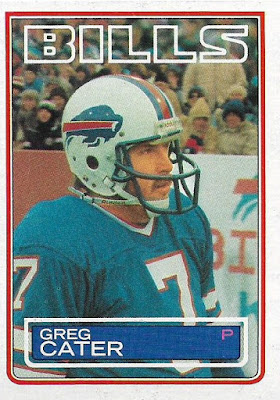 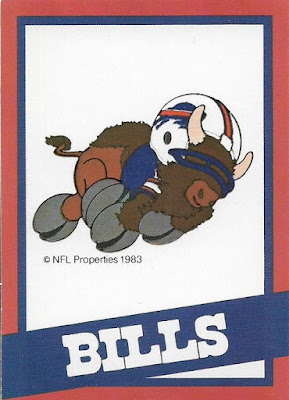 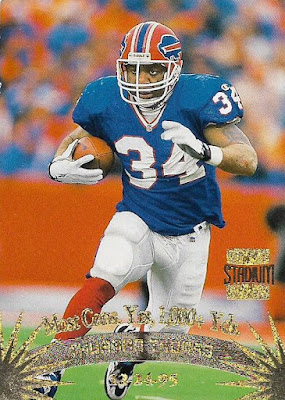 The other cards that Nick sent were straight from 1 Bills Drive, Orchard Park, New York, 14127.

I absolutely love the 1983 Topps football design. If I was collecting football cards at this time, it would be my all-time favorite football design. I need to stay away from those cards or I will be forced to collect them. 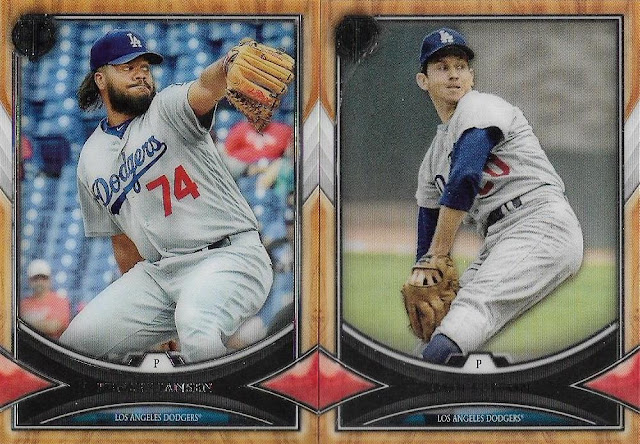 Next cluttering my desk (and I mean "cluttering" in the most positive way possible) were three cards from Gavin of Baseball Card Breakdown.

Two of them are from this past year's Tribute set. I never know what to do with these cards -- they absolutely kill pages -- but yet I asked for them. They're pretty handsome, with the faux wood finish.

These were part of Gavin's recent giveaway and I'm glad I snagged the Dodger-centric prize. 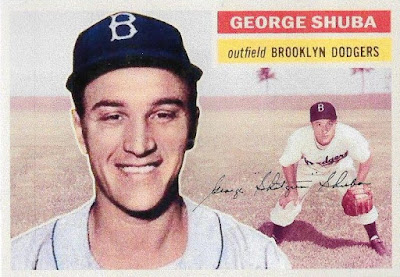 Gavin also sent one of his custom creations, a 1956 Topps-themed George "Shotgun" Shuba card. It is an impressive piece of cardboard, right down to the back: 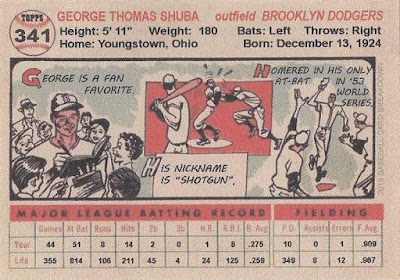 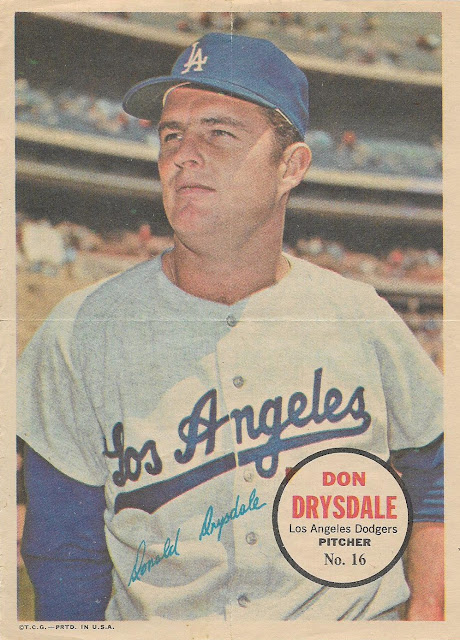 Finally, one last item that doesn't clear everything off the desk, but does make me feel better that inspectors won't be busting down my door anytime soon.

This is a 1967 Topps poster of Big D. Mark Hoyle found himself with an extra of this handsome piece of newsprint and sent it along!

As sharp as it is, it will stay in its protective case forever because it is paper thin and it will fall apart if anyone looks at it incorrectly (that's why Giants fans are forbidden from owning it -- yes, that's my third crack about the Giants this post).

Hope you enjoyed the rambling.

Mike the History Teacher said…
And don't forget, every baseball thrown in a major or minor league game by Nick, Clayton or Paul Blackburn had been carefully rubbed beforehand with Lena Blackburn(e) Baseball Rubbing Mud.
January 13, 2019 at 8:33 PM

Jason T. Carter said…
I like the look of 1983 Topps football cards, but 1985 is my favorite design. Too bad I don't like football anymore.

Mark Hoyle said…
I’m putting together the 67 pinup set to go with my flagship 67 set. They fit nicely in two pockets. If you put them back to back you get 4 to a page. Stiffens them up slightly
January 14, 2019 at 8:47 AM

Rob said…
That cartoon Bill! I forgot how the NFL had those kid friendly images in the 80's. I remember Wendy's kid meals would come with sheets of stickers with those. Back when their tables looked like old-timey newspapers...
January 14, 2019 at 10:04 AM

Old Cards said…
Congrats to Greg and thank you Billy for reminding me again about the Trading Card Database. I'm not sure why I forget to check it. What a great site for collectors!
January 14, 2019 at 10:10 AM

Josh D. said…
The cartoon Bills card has to be from Avon Soap-on-a-Rope! Appears that product was called "Avon Huddles". You used to be able to get cards with your SOAP. I received this as a present from my grandma in the '80s. Cards were cool, but the soap was awful -- it cracked when it dried out. I'm sure this is information you and your readers desperately needed to know.
https://www.worthpoint.com/worthopedia/1983-avon-nfl-huddles-set-football-29644190