The one person not afraid to send me this card 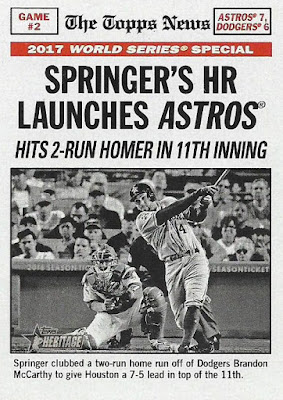 This card has sat on my Nebulous 9 list for far too long. It was easily the most available card on that list for a long period of time and for months and months and months it was the last card I needed to complete the 2017 World Series subset from 2018 Heritage.

I finally received the card from Henry at Cardboard Greats. He's the one guy with the guts to send me this card, apparently.

I actually don't know why the other cards from this subset arrived so readily (some I pulled, some came via card packages) but this one did not. The only thing I have to go on is it shows the one Astro to do the most damage to the Dodgers in that World Series, hitting a game-winning home run in extra innings of a game that the Dodgers could easily have one.

But that was nothing exceptional in that series. It was a crazy back-and-forth series, full of tension, excitement and crushing lows. And this wasn't even the one late-night, walk-off Astros victory, it happened again in that bizarre, still inexplicable Game 5 as well. Yet, I've owned the Game 5 card since last summer.

Astros win? Still want them. Dodgers win? Yes, definitely. I'm about the whole story. Set collector. Sports journalist. Both sides of the story. The complete picture. The glory and the pain. Prologue to epilogue. The entirety.

So, finally, I have the entirety. Here it is: 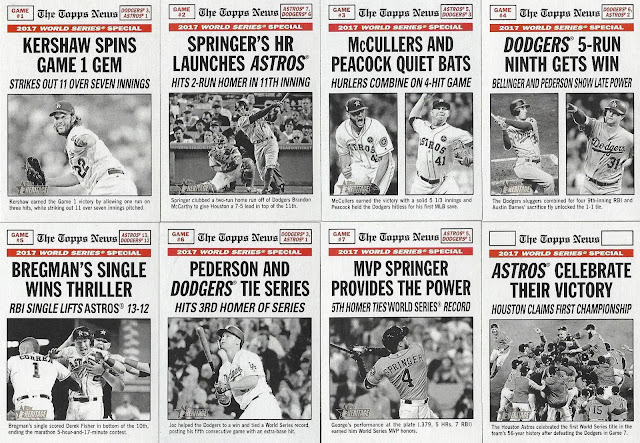 Topps did a fairly decent job of replicating the look of the 1969 World Series subset. It changed a few things, and, of course, it had to squeeze in those stupid trademark symbols. But overall, a good look. 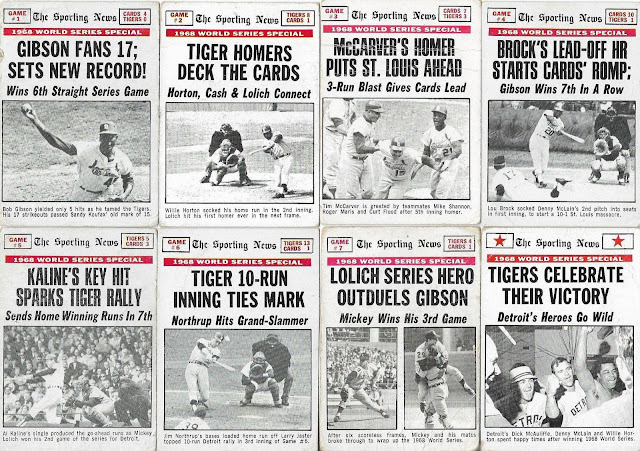 The obvious differences: "The Sporting News" has been changed to "The Topps News". The subheads are all in caps instead of up-and-down format. The red stars are missing from the final card in the 2018 Heritage set. 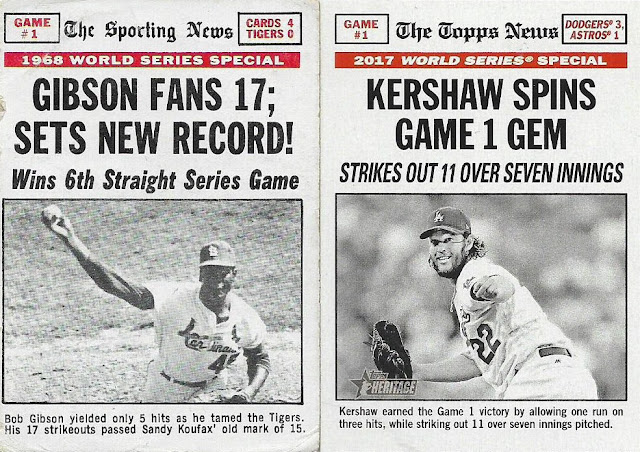 Game 1. Conveniently a dominant pitching performance in each game. Probably my favorite card from each subset, too. 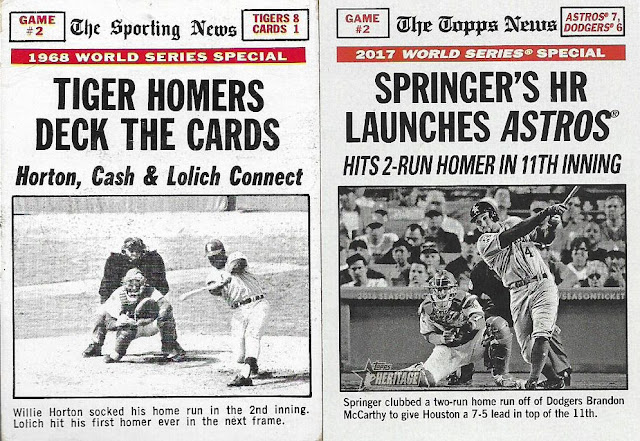 Game 2. Each card features a key home run. Those copyright symbols sure do look goofy when you compare the cards side-by-side though. But I LOVE the Tiger headline. 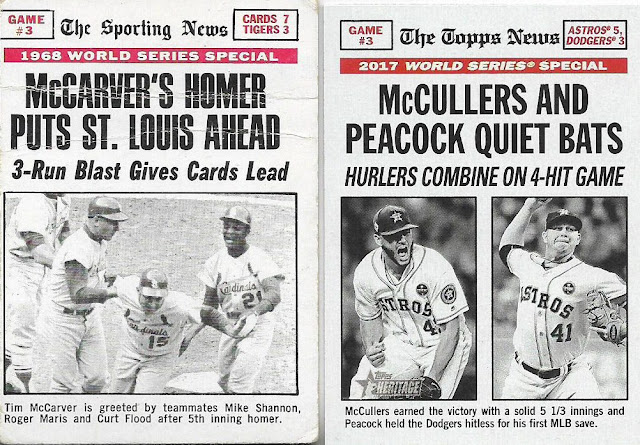 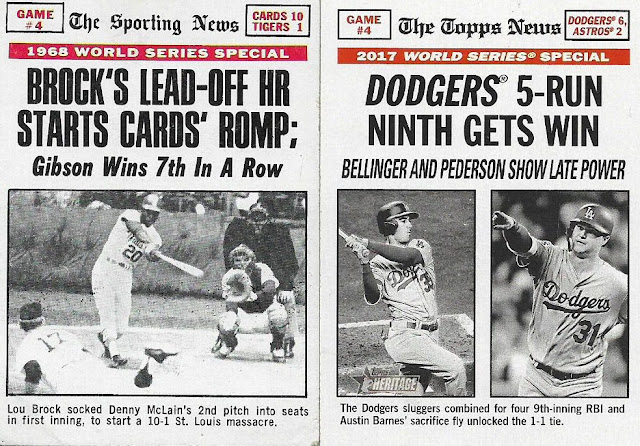 Game 4. More mashing in each game. Topps has been a little loose with the headline rules the last two 2018 cards. In Game 3 it violates the "you never end a line with a preposition" rule and in Game 4 it splits the modifier (5-run) with the word it's modifying (Ninth). 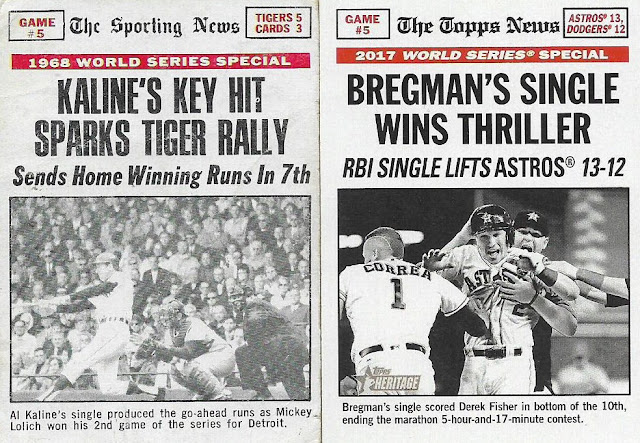 Game 5. Ugh. This game. I like the Kaline shot much better. 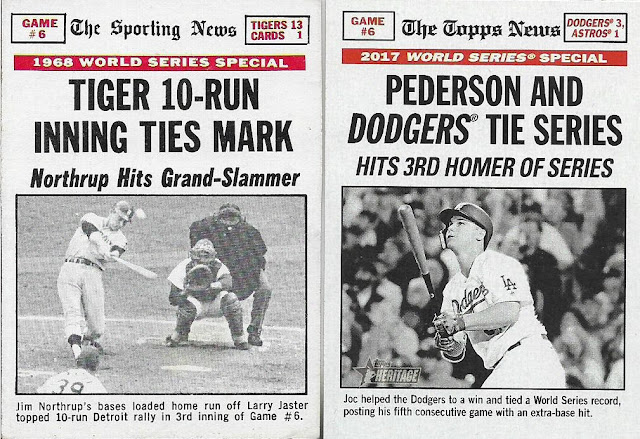 Game 6. This game is often considered pivotal in 7-game World Series, dramatic even. Sadly, that wasn't the case in 2017.

Topps also violates another headline rule in the 2018 card with that "and" hanging off the first line. 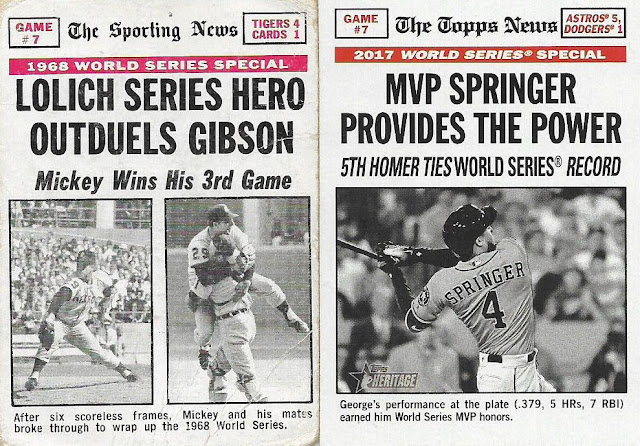 Game 7. What I call "the Yu Darvish game". I felt sick just about entire game. 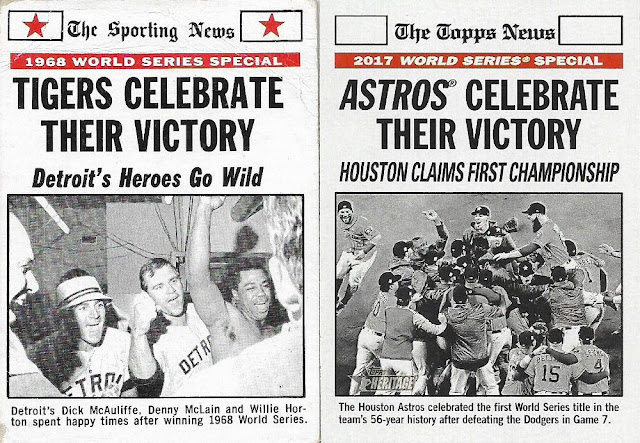 The recap. The '69 Tigers card looks more fun to me, and that's not just because the Dodgers lost Game 7.

We can't forget the backs in this comparison series. 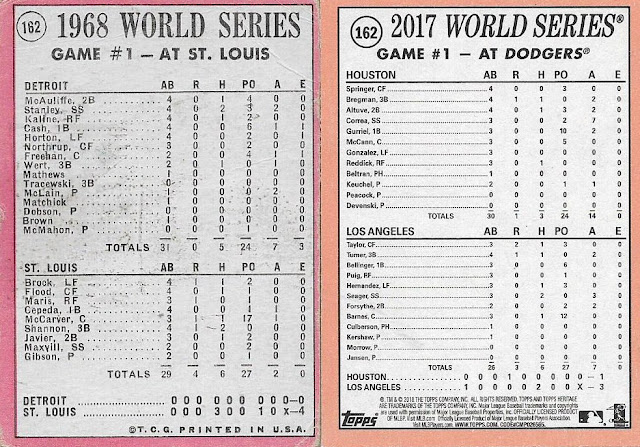 Here is a comparison of the Game 1 back. As you can see, each subset began with card No. 162, a Heritage tradition, matching up card numbers between the two sets.

It's interesting that Topps goes with the team nickname in the 2018 subset instead of the city name, probably one of those dumb MLB licensing rules. And get a load of all that copyright information in the 2018 card, causing the boxscore type to be scaled back. 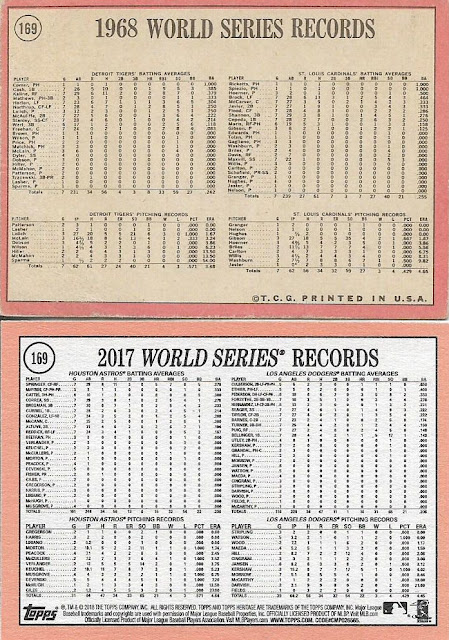 Those are the backs for the World Series summary cards. Now that's difficult to read. Zoom in with the magnifier and it's interesting that even in a famous "pitching year" like 1968, the team batting averages for both teams are far better than the ones in 2017.

I've been waiting to do this comparison for some time. I got it done, it just took a little longer.

Henry sent some other Dodgers goodies that had absolutely no Astros on them: 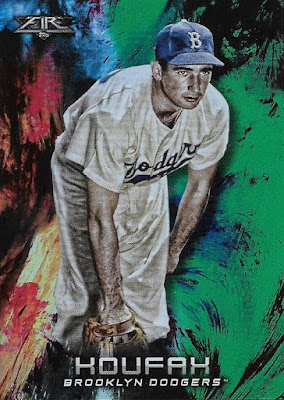 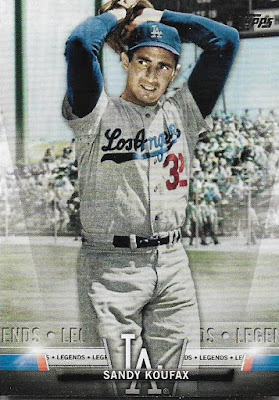 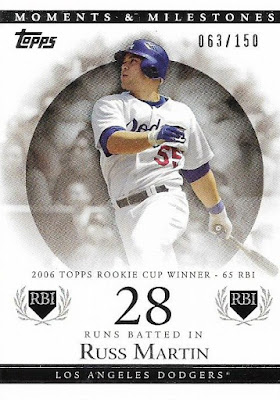 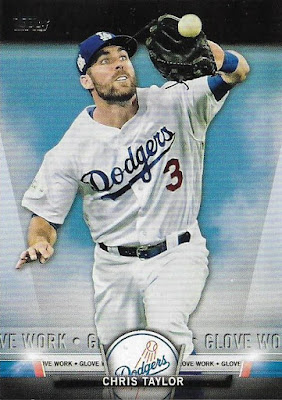 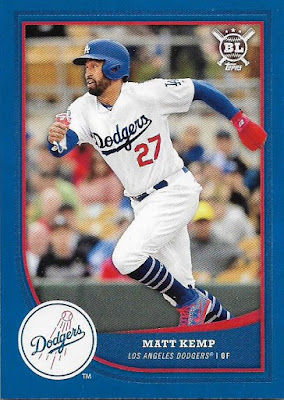 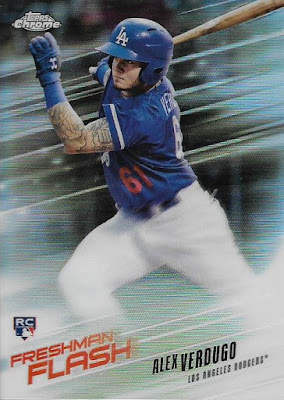 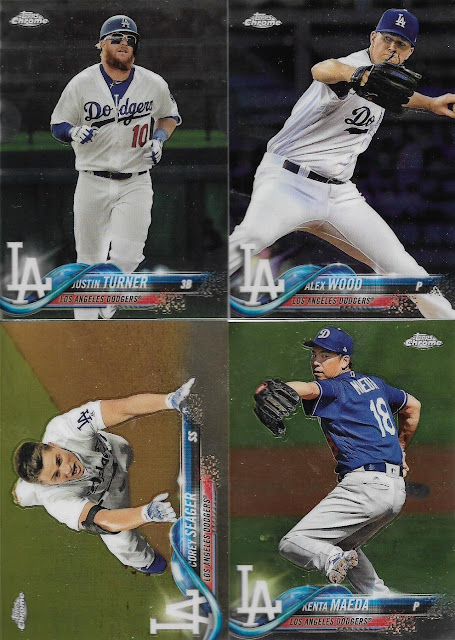 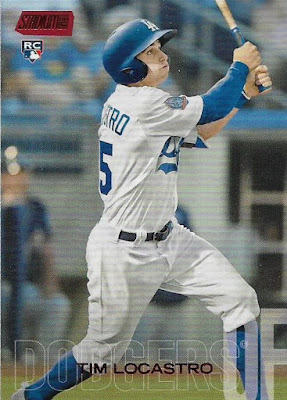 When Heritage comes out this season, there will be another World Series subset involving the Dodgers to collect. Even though the 1970 Topps WS subset isn't nearly as interesting to me as the 1969 one, yes, I will still want all of the cards, even though the Dodgers won just one game.

Send me those cards. I can take it.

Nick Vossbrink said…
Really weirds me out how Topps has to italicize (or, in the case of italic set text, unitalicize) the team names everywhere. Also good lord that is a lot more players (especially Pitchers) in the World Series agate/pearl/brilliant-type summary.
January 31, 2019 at 8:54 PM

BaseSetCalling said…
I have listened to a broadcaster who was a part of the 68 Tigers all my life, though he didn't appear in the World Series (Jim Price), and have listened to Mike Shannon some over the years too. So I have heard plenty of 68 stories for a really long time ... I need to step up and collect those original 69s - a heckuva run of cards.
February 1, 2019 at 12:20 AM

Fuji said…
I really love the whole front page newspaper design of the 69T WS subset. It's probably my favorite World Series cards. Well... at least off the top of my head.
February 1, 2019 at 12:35 AM

The Turrdog said…
I'm putting together the '69 set and doing pretty well. Those WS cards are some of the toughest cards to find at a reasonable price.
February 1, 2019 at 7:11 AM

AdamE said…
Nice but they could have done a little better with the Headlines and made them match the originals more.