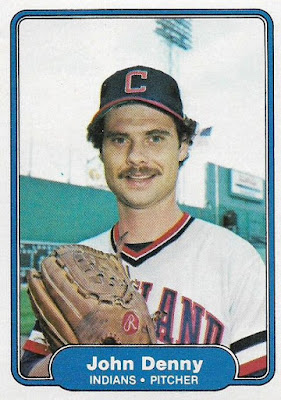 Every snowstorm begins with just a few flakes. It helps prepare for the blizzard to come, although "blizzard" is one of the most overused weather terms. I live somewhere where we can get three inches an hour and I still wouldn't call that a blizzard.

I'd prefer a few flakes at first, and then all of the big snow stuff arrive while I'm sleeping. That's what happened with the latest storm this past weekend. A bunch of wind and snow-spraying that amounted to not much on Saturday and then I woke up on Sunday and I was clearing a foot-and-a-half off my car.

I'd equate the situation with the 1982 Fleer storm surge that's arrived here at the house. Once I posted an '82 Fleer list, the heavens opened, and now I'm digging out. The Fleer pile is quite high and the doctor says I shouldn't take all of it on at once (he also says "lift with your legs"). So I'm starting slowly with just a few flakes, some '82 Fleer cards sent by DMA of From a 1980s Baseball Card Collector. With a blog title like that, he would have a few '80s cards around, huh? 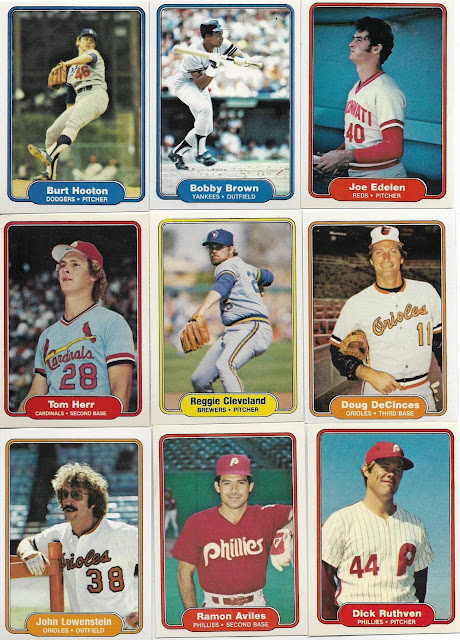 That is a wonderful assortment of early 1980s poses and what passed for a Fleer card back in the day ("stare vacantly into space like a dumb-ass yokel. Yes, just like that." CLICK!). 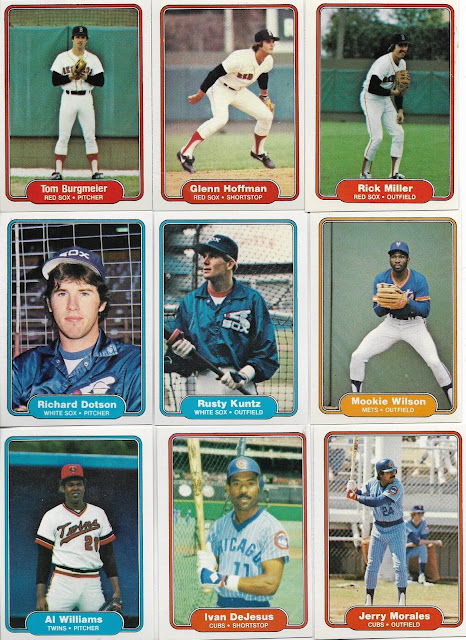 I still can't help but love '82 Fleer, though. The imperfections speak to me and there is character all over this set, from the dullest distant shot ever on the Tom Burgmeier card to the perplexing cropping of the Mookie Wilson card.

I pulled out 10 cards from the envelope that I enjoyed the most. No ranking here. Just 10 good ones. 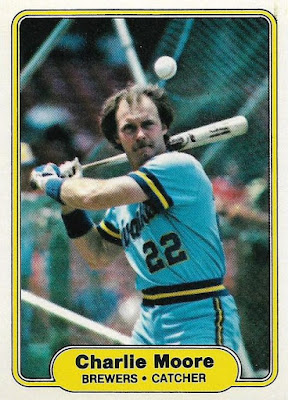 No chance that a card like this gets made today. First, they're not showcasing infield workouts on modern cards. Second, no ballplayer balds like this anymore. It's against the rules. Shave that head. 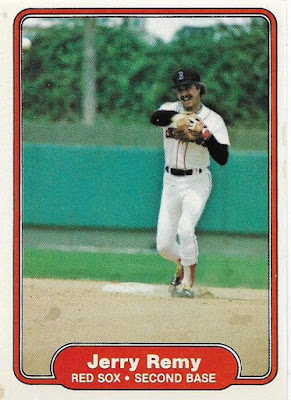 Ah, '82 Fleer. Show the player throwing the ball, but just barely get the ball in the frame. I do enjoy all the trees though. 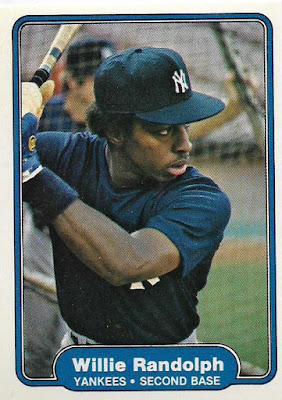 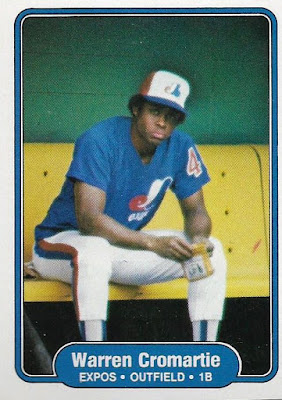 Warren Cromartie has a pouch of something. The only certainty is he's not sharing it with you. 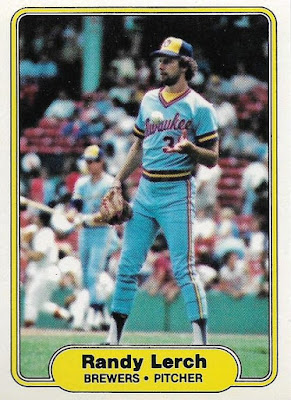 Casual ball-tossing is always money on cards, but it seems to me that the ball will glance off of Lerch's fingers and drop on the ground. 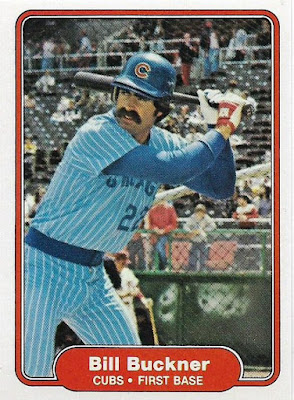 A spring-training scene if I've ever seen one. A sparse crowd. Spectators casually lounging in the stands. The bat boy using the bat to write something offensive in the dirt. 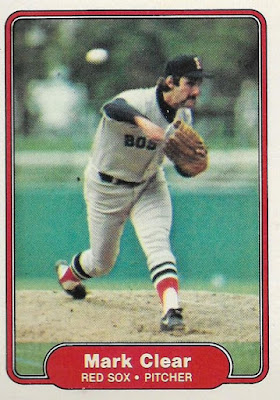 When I was a kid we had to deal with blurry hands in our action photos. AND WE LIKED IT. 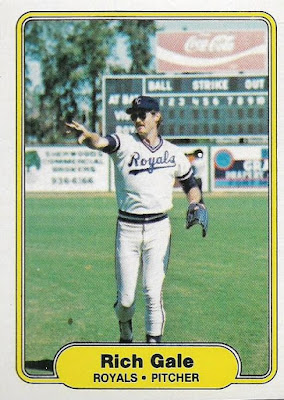 This is an even better spring training photo than the Buckner card, although I don't know anyone who throws like Rich Gale is pretending to throw. I love the full Coca-Cola sign in the background, and no one had to consider whether it was an official sponsor of Major League Baseball. 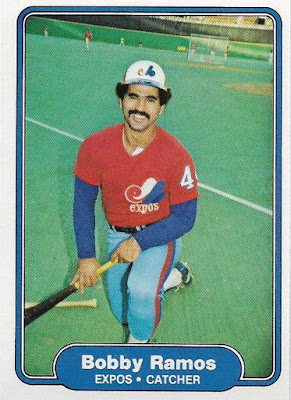 I think if '82 Fleer was really trying, it could've shown the entire field on this card. 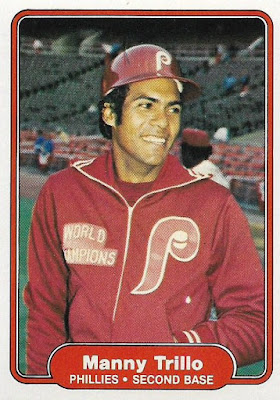 Last card. It's not often that you see on a baseball card confirmation of a player's World Championship status on his jacket. This is long before team-issued gear presented the instant a team won a title.

DMA also sent these three 1983 Fleer needs. Sometimes I wonder why I like '82 Fleer so much more than '83 Fleer, but that's just the way I am. I'll collect everything at my own pace.

Not long after I received this envelope an avalanche of '82 Fleer was dumped on me, cutting down my want list so that it appears I've been working on the set for two years instead of a month or so.

I'm still clearing out from that. The next step is showing it on the blog. Get ready for a whole bunch of odd-yet-wonderful photos.

Mike the History Teacher said…
You might have talked about this in a previous post, but according to The Trading Card Database, it looks like Joe Edelen is a One Card Wonder.
January 23, 2019 at 10:11 PM

GCA said…
Rich Gale is showing the other guys in the infield where that hot chick is sitting. "See the beer vendor guy? Two sections over just below the stairway opening. Next to the guy in the straw hat..."
January 24, 2019 at 8:42 AM

Johnnys Trading Spot said…
I think Cromartie has a pouch of Levi Garrett chewing tobacco.
January 24, 2019 at 10:20 AM

AdamE said…
I knew you had a big snow this weekend. Something I never shared before is that my brother-in-law lives in Waterton. He moved there a few years ago. We just talked to him and he was complaining about all your recent snow while we were bragging about our 70 degree weather. Small world huh.

I can't see the name Tom Burgmeier and not automatically change it to Tom Berenger. I can't tell you how many times I have started to checked the back of his card to see if it mentioned any of his movies before I went, DUHH.

"Second, no ballplayer balds like this anymore. It's against the rules. Shave that head." You must not watch many Red Sox games. That or maybe you just never saw a certain 2nd baseman (when he's not hurt) without his hat on.
January 24, 2019 at 11:15 AM

gregory said…
That Rich Gale card is generating a lot of comments! To me, it looks like he's just thrown a shot-put. Or maybe a javelin. Or maybe he's putting a hex on someone.
January 24, 2019 at 1:28 PM

BaseSetCalling said…
Fleer 82 seems like they let the intern design it, while he was still only part-way through Baseball Cards 101. Using Team Colors then exhausted his creativity reserves.
January 24, 2019 at 1:35 PM

DMA said…
I'm glad I could contribute to the effort! My favorites of these are the Rich Gale card because of the Coca-Cola sign, and the Manny Trillo for the World Champions jacket. Also it looks to me like the Bobby Ramos and Ivan DeJesus may have been taken at the Vet in Philadelphia.
January 25, 2019 at 7:46 AM

bbcardz said…
When I look at the Bobby Ramos card and its background, it seems like the whole stadium is about to capsize. Or is it just me?
January 27, 2019 at 4:33 PM

acrackedbat said…
DeJesus stand out in the bunch. The bat centered between two balls...comical!
January 28, 2019 at 10:13 AM