'56 of the month: Willie Miranda 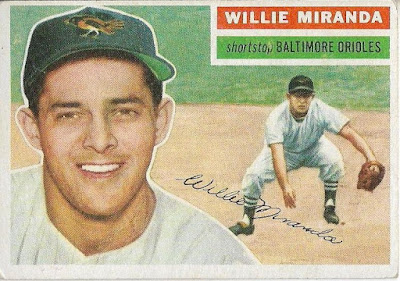 To have an inexplicable attachment to a baseball card seems like such a part of childhood. It's not adult behavior.

We adults know exactly why we like a card or a player. We can recite the reasons for anyone who asks: I like how he plays the game. He's on my favorite team. He plays my favorite position. He signed an autograph for me. He doesn't beat his wife or take drugs. He ascribes to my political affiliations/beliefs (this is a new development that is weird to me).

Back when I was a kid I'd like a card for absolutely no reason, or at least not a reason that I can grasp as an adult. I would have no idea who the player was. That player could play for any team. The player could be shown in action or merely staring into space. Who knows why I liked that card! If only I could get into 9-year-old night owl's brain.

But I'm long past being 9 years old. And still there is this card here to which I have an inexplicable attachment, that I like for absolutely no reason according to my very adult mind.

I don't know who Willie Miranda was. It seems he was a popular infielder known for his defensive skills who became the first Cuban player to play for the Yankees since World War I. But that's all stuff I just looked up so I wouldn't appear a complete idiot in front of other adults.

The fact is, I like this card for two reasons:

1. His name is Willie Miranda

2. He's hopping on his card

That's it. That's why I like it. Doesn't that seem like reasons a kid would come up with?

I've liked this card so much for so long that when I have looked through binders of '56 Topps at card shows and I came across this card and saw a price I couldn't afford, I would think, "well, of course, because it's Willie Miranda." And I'd assume that this Miranda guy had an interesting '50s story that made his card valuable that I just didn't know.

But, no, Miranda's lifetime batting average was .221. He wasn't a star. The only reason I couldn't afford the card is for the same reason I can't afford any '56 Topps card: they tend to be pricey no matter who is featured.

The hopping part is interesting. I'm not sure what Miranda is doing to make him appear as if someone just lit a fire under him. Probably leaping to cover second base or preparing to dive for a ball. 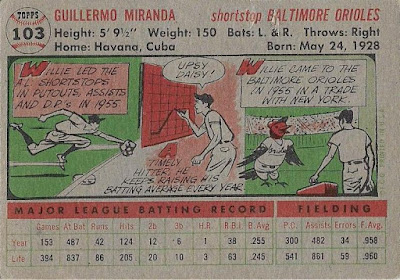 "Guillermo Miranda" was called "Willie" on his baseball cards through 1957 and then in 1958 and 1959, he became "Willy," which is how his parents spelled his name (that's according to a very detailed SABR biography).

The middle cartoon is a bit too kind. Yes, Miranda's batting average went up every year between 1952-55. But don't look at his average after that. That lifetime batting average of .245 shown on the card plummets by the time he wrapped up his career in 1959. But Miranda's glove will always be the first thing fans mention about him. Some consider him the best fielder they ever saw.

Miranda is remembered for his time with the Yankees because that's always the way it is. The Yankees and their fans have to make the most noise about their player.

But Miranda played just two seasons for New York. He played for the Orioles for five. And I associate him totally with the O's because of this card.

I remember when this card came out of the brown grocery bag of 1950s cards that my dad brought home from work back in the early 1980s. I noticed its appeal immediately. But because my brothers and I had agreed that any Dodgers would go to me, any Red Sox would go to one brother and any Orioles to the other brother, I knew I would never get that Miranda card.

That was disappointing. Because his name was Willie Miranda. And he was hopping.

Sometimes that's enough to like a card. Even as an adult.

Commishbob said…
Such a neat card! I always thought the action shot of Miranda was one of him having made the throw as he was leaping over a sliding runner to complete a DP. I figured the artist just excluded the sliding guy.

GCA said…
My first thought was that he initially broke to his right and then had to dart left because of a weird bounce or something.
Some cards are just a lot more aesthetically pleasing. The guy has a smile on his face like your family would when you would visit for Christmas as a kid. Or maybe the elements of the design just align in that feng shui kind of way. (Yes, I had to look that up)
January 28, 2019 at 8:52 AM