To celebrate my 2,000th post, I threw out cards 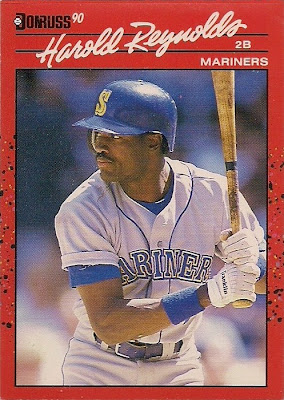 Thanks for reading, enjoying and commenting. You'll be happy to know there is a contest attached to this. But I'm not sure if you'll want to enter it.

Part of what I did on my vacation last week was to organize some cards. I am continuing to inventory my cards, and as I plod along on a task that's taken me years, it's pretty clear that I have far more cards than I thought I did. This was also evident as I also organized two large boxes of duplicates.

In fact, that part of the organizing distressed me so much that I actually threw out a bunch of cards.

This is something that I'd never do before, but I think it was necessary.

I have no more room for any "extra" cards. The barn is full. And as I stared at those duplicates, stacks and stacks of 1990 Topps and 1989 Fleer, I knew that I could never get rid of them. I've tried it all, trades, charity, garage sales, and there are just some cards that nobody wants.

So I threw out a good-sized pile of junk wax. It felt good. Cleansing.

But before I threw them out, I stacked them according to set. I was curious to know which junk wax set featured the most dupes. And this is where the contest lies.

Here are the sets that I stacked up:

Of all those sets, five of them emerged as the ones with the most dupes. They were clear winners. Especially two of them.

Your job as a contestant is to list which five sets those were. Also, place them in order from the most cards to the least cards.

The winner will be the one who chooses the five sets and gets closest to the correct order.

If there is a tie, then it's randomizer time.

So what do you win?

Well, in keeping with the theme, you win my doubles!!!!!!

Wait! Wait! Where are you going? Come back!

I promise none of the doubles that you will win will be from junk wax central.

Here is somewhat of an idea of the kind of cards that you will win: 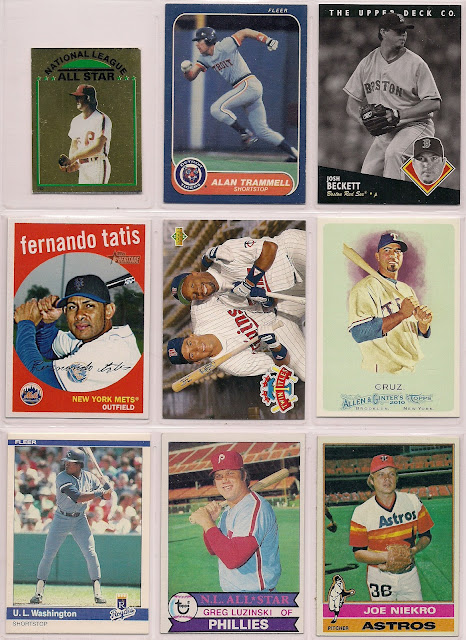 A decent mix of today's cards and cards from yesteryear.

Also, I received a shipment of cards today that greatly enhances my selection and quality of doubles: 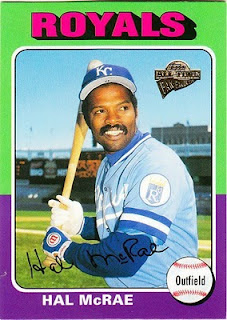 Fan Favorites doubles!!!!! Only some of the best kinds of doubles ever.

And, if a Dodger fan wins the contest, you can expect extra goodies.

I will be giving 200 cards to the winner. I could give away 2,000, but, really, who wants that many cards? I certainly don't want to ship them.

And don't worry, you won't be getting 10 copies of a 1994 Topps Mark Langston card. Each double in the lot will be unique from all the other doubles in the package.

All you have to do is leave a comment on this post saying that you're a contestant. Also, if you really want any junk wax cards, say so in the comments. I didn't throw ALL of it out. I don't think that's possible.

Take advantage of this while you can. It's not every day that I'm in throw-out mode.

Anonymous said…
Funny thing... At the exact same time you posted this, I was having a jaw-dropping moment where I found a box containing a couple of thousand doubles of sets like 1986 & 1987 Topps, and 2000 & 2001 Bowman. I looked through the box and mentally screamed "OH MY GOD, WHY DO I STILL HAVE THIS STUFF?????"

Mine are also getting trashed. On the plus side, I also found some stuff which will be blog material.

As for your contest... I appreciate the offer, but I clearly need to purge more of my own cards before I start taking on other people's doubles.
May 14, 2012 at 8:04 PM

Nachos Grande said…
And to think, I've been toying with the idea of actually trying to collect the 1990 Topps set, the 1991 Fleer set, and maybe the 1992 Score set...and here you are throwing them out!

Robert said…
First of all N.O. congratulations on 2000 posts, an amazing achievement!!

Thank you for the contest, here are my guesses in order from most to least.

hiflew said…
I'll go with what I have the most of. Maybe we have similar tastes.

Nick said…
Congrats on the milestone! 2,000 posts is staggering.

Here's my guesses from most to least, thanks for the contest!

Jason said…
My guess, similar to what I've got a ton of, with the exception of the '93 UD, which I somehow don't have that many of.

gcrl said…
from most to least

Chris Stufflestreet said…
Actually, would you believe that I don't actually own any 1987 Fleer or Donruss? Yes, I used to...but I traded or sold them all in the late 1980s (before we all realized just how much of it was out there).

I actually think '87 Fleer was a great-looking design and would gladly take any dupes from that set (Donruss, too) if anybody was thinking about just tossing them away.
May 14, 2012 at 9:55 PM

night owl said…
Believe me, if you saw which cards I threw away, you wouldn't want them.

runfore!kelloggs baseball cards said…
Nice. I got rid of most of my common doubles in 1999 and I don't miss them, especially since I moved a few times since.

I would not guess Fleer because in a 540-card box, there would be hardly any duplicates. Meanwhile, a Topps box seemed to always have some players four times.
May 14, 2012 at 10:24 PM

My guesses, from MOST to least:

does anybody have a method to their guessing process? I'm just totally throwing out a random guess here.
May 14, 2012 at 11:41 PM

Captain Canuck said…
you meant, you recycled them, right?

For the contest I'll say

Spankee said…
I don't get it: Blogger tells me I incorrectly entered the word verification "words" yet now I've posted my comment twice. ARGGHH!!
May 15, 2012 at 9:38 AM

I'd be happy to take 93 UD, 92 Leaf and especially 93 Fleer. Don't have any interesting Dodgers to trade (just did trades with Nomo's Sushi and GCRL) but maybe you'd be interested in an autographed Frank Robinson card (or six of them!)?
May 15, 2012 at 10:20 AM

GCA said…
I didn't collect in the 90s, so I became somewhat of the junk wax king at my local shop filling in the ones I liked. Thinking of trying 1988 Topps next, so I'll take those.

My guess (and bulk roster):

Don said…
My guess from most to least:

cynicalbuddha said…
Oh and while I was first and in a rush to enter the contest I neglected to say congrats and thank you. You're a roll model for us all. Keep up the good work and here's to 2000 more posts!
May 16, 2012 at 2:15 PM

The Lost Collector said…
Congrats on the milestone! Here goes:

Nathan said…
Congratulations Night Owl. It's always blown my mind that you not only post so consistently but also so consistently well. To maintain a high quality over such a long period of time is really a great accomplishment. Here's to another 2000!

From most to least:

Jafronius said…
Congrats on 2000 posts! You are certainly a legend in the blogoverse.

My guess, from most to least:

I'd certainly be interested in the Topps cards to see if I can try to complete those sets.

Congrats on your 2000th post! You certainly are a legend in the blogosphere. Here are my guesses (most ot least):

I'd also be interested in your Topps sets duplcates to see if I can get close to completing mine.