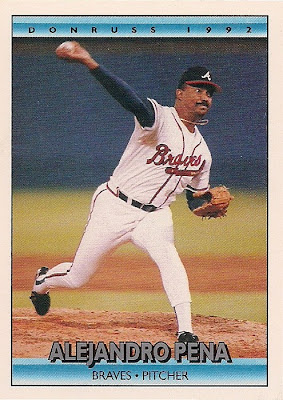 Among my favorite kinds of night cards are the ones in which a card company was forced to use a photo from a night game because the game was one of the only chances it had to feature that player in his new uniform.

This often happened with late-season acquisitions, and it often happened in the early '90s when it was important to feature a player in his new uniform, avoiding airbrushing at all costs, but also when taking pictures during daylight hours was still ritual.

Alejandro Pena was acquired from the Mets in late August of 1991, leaving Donruss just a month of the regular season to get a photo of him in a Braves uniform. Fortunately for Donruss, the Braves reached the World Series that year, so they had the whole postseason, too.

And, so, unlike several other 1992 Donruss cards, the picture on the card matches the team listing on the card.

A game at night saves the day.

This card also serves as a nifty lead-in for the final results of the Biggest Improvement and Biggest Bust in Donruss history.

Here are the final tallies: 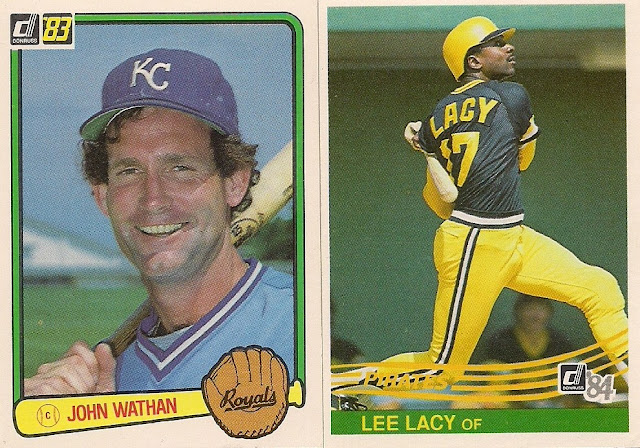 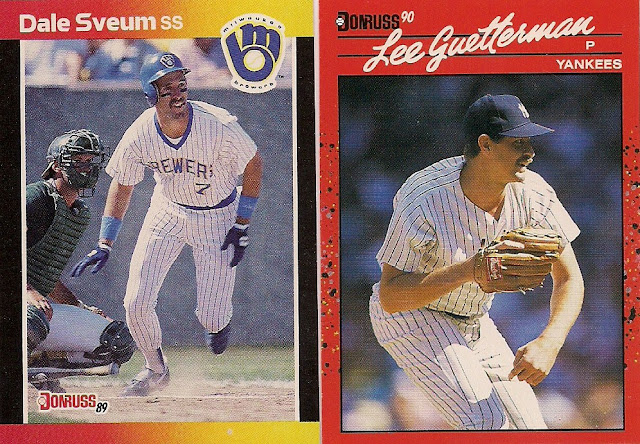 The "Biggest Improvement" featured a much more clear consensus than the "Biggest Bust." 1984 Donruss is easily the winner. Donruss broke away from its childish, copycat design of 1983 and went with something more sophisticated and photo friendly.

Obviously, I agree wholeheartedly with the 53 percent of voters who picked 84 over 83. Nothing came close enough to consider. 1984 to 1985 picked up a couple reactionary votes after I announced that 83-84 was running away with it.

But the voters have spoken, and the biggest improvement and biggest bust in Donruss history will take up residence on the sidebar.

As someone who isn't much a fan of both Upper Deck and Donruss designs, I'm relieved we're done judging both companies. I'm looking forward to Fleer and Score and Pinnacle and a few others.

Uh, oh, I just remembered Bowman is still out there, too.

Night Card Binder candidate: Alejandro Pena, 1992 Donruss, #772
Does it make the binder?: Probably not. I don't plan to feature cards with numbers that high in the binder.

Bo said…
Hey 84 Donruss Fan - I think you will enjoy this:
http://stevemoorearchives.photoshelter.com/gallery/DONRUSS-BASEBALL-CARDS-THE-EARLY-YEARS/G0000cdS8tvIqqe4
May 30, 2012 at 9:30 AM