A book I could've written 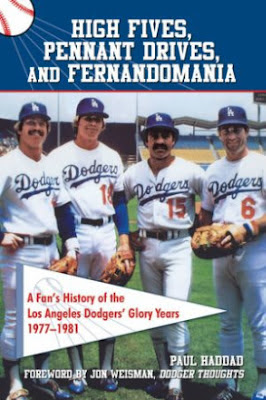 I received this book in the mail from Commish Bob at the '59 Topps blog. He thought it would be something I would enjoy.

He's right about that.

As you may have guessed, I hold the Dodgers teams from 1977-81 on a higher level than any other team from any other era. This was the period when as an 11-year-old boy, I really formed an attachment to a team, which also happened to be one of the best teams in baseball during that five-year span.

The memories of the teams from that time are some of the strongest of any baseball memories that I have. And this is the exact time period, some of the exact moments, that are covered in this book by Paul Haddad.

Haddad is a TV producer and writer. He's my age, and he grew up a Dodger fan. The book is filled with every memory you can think of from the Dodgers of that period -- the World Series games, Fernandomania,  Rick Monday's home run, the 1980 pennant race and the suckiness of Dave Goltz, everything. And it is all approached from a young fan's perspective.

So, when you read about Reggie Jackson's three home runs in the 1977 World Series, it is not praised as some epic event to be celebrated by the human race, but as it should be -- a moment of depression in which you clutch your head in agony and sink into the corner, face toward the wall.

Haddad practically channels my thoughts from that period -- the horror of the Garvey-Sutton locker room fight, the certainty that Howard Cosell openly rooted for the Yankees during World Series broadcasts, the fondness for Pedro Guerrero -- it's almost frightening how we were feeling the same thing.

Haddad even used one of those old, boxy, cassette recorders to record Dodger games on the radio. He would press the recorder's microphone against the speaker and listen to Vin Scully, Jerry Doggett and Ross Porter.

I did the same thing! I had one of those old recorders, with the buttons in the front. I would take great care, when recording songs off the radio, to pick the precise moment when the D.J. stopped talking and the song began to press "play." It was an art form.

I taped some games, but not many. I live 3,000 miles away from Dodger Stadium, so the only games to tape off the radio were Yankee games. That got old pretty fast. Why would I want for all eternity to hear Phil Rizzuto praising Rick Cerone?

Haddad had it much easier, growing up in California. His recordings are the basis for the book. As a youngster, he would tape entire games, then transfer only the best moments onto another tape, and soon he had tapes and tapes of Dodger highlights.

The book is filled with references to Scully, as well as the other announcers, and, of course, you get an ideal view of a Dodger fan's perspective during those radio moments.

Those were my thoughts. Really, I could have written this book.

That is, if I had lived in southern California during the late 1970s. And if I had the persistence as a pre-teen to record Dodger moments for four years.

I'm looking forward to really sitting down and reading this book. And reliving what I was thinking back then.

Meanwhile, Bob sent a few cards with the book. 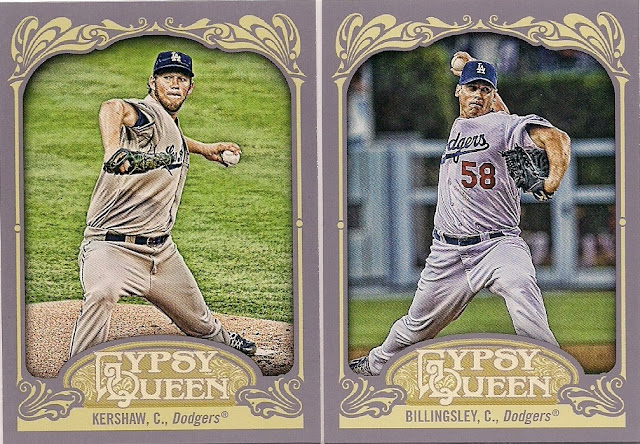 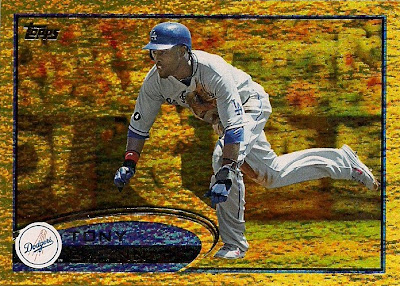 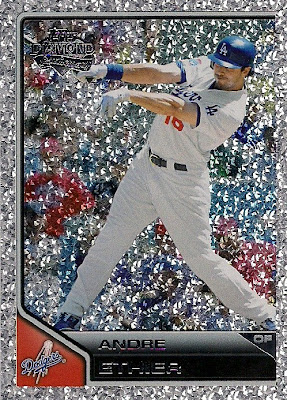 He sent a few other cards that I already have that I plan to use as book marks when reading this book.

No, just kidding. Some Dodger collectors can expect to see some of them.

Stealing Home said…
uncanny brother...it's the same team i grew up with as well.

..the suckiness of dave grolz..LoL, nailed !

although i didnt record games as you and the author, i have fond memories of sunday afternoon family picnics at elysian park...and hearing the huge roars from the stadium on the other side of the hill whenever something awesome happened. i thought to be inside there must be a wondrous thing.
it truly is...
May 19, 2012 at 3:13 PM

Commishbob said…
I buried my head in my hands and stuck my face in the corner in agony when Reggie hit those three homers, too. And I was 27 and not even a Dodger fan!

Brandon said…
Was enjoying Vin Scully on mlb network earlier tonight. Such a great announcer. Here in Michigan Ernie Harwell is revered and missed, but listening to Scully is pretty darn good.
May 20, 2012 at 1:18 AM