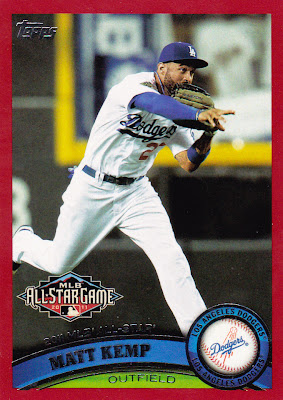 I am supremely confident that Matt Kemp will win the National League MVP award at 2 p.m. today.

I am so confident that I am congratulating him right now on this here blog:

Congrats to The Bison! One of the most phenomenal seasons I have ever seen! Woooooooooooooooooo!!!!

Kemp's season was a tribute to the powers of offseason dedication. It was also perhaps the most impressive example of singular focus that I have ever seen during the entire length of a baseball season. Kemp did not let up for one game, even while the team struggled, even while the media beat everyone over the head with ownership issues, even while online trolls weaved their too easy web of negative idiocy.

Victory is Kemp's. And a nice, big, fat contract, too. I have eight more years of Kemp cards to look forward to acquiring.

I am celebrating with two of them from Capewood's Collections.

The card above is my first Target red-bordered card. I like them better than those Walmart pale blue border things. 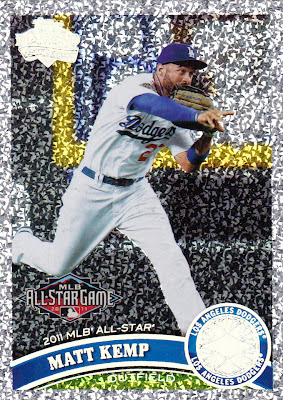 And this diamond parallel from Capewood means I already have five different versions of this card. How long has Update been out? A month? Parallels are multiplying faster than 1991 Donruss.

Anyway, I'm pleased that my Matt Kemp collection is not too far away from 200 total on the day that he wins the first MVP award for a Dodger since Kirk Gibson 23 years ago.

But, I know someone out there is thinking, " so, um, what if Kemp doesn't win the MVP award?

But if it does, I got another card from Cliff that will be fitting. 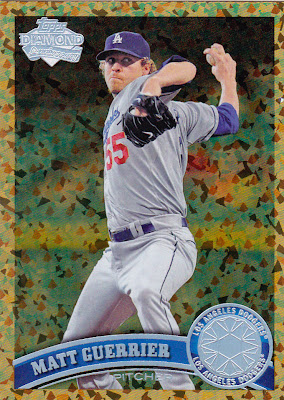 If Kemp doesn't win, I will definitely need a drink. May as well have it poured out by an underachieving, overpaid reliever.

Expect an interesting rant, too.

But again, it's not going to happen.

Night card binder candidate: Matt Kemp, 2011 Topps Update, Card #US59
Does it make the binder?: Yes, although probably not the red-border version. I've got enough of the base card to fill 8 binders, if I want.

Bo said…
Is it possible to jinx something that already happened, but you don't know the result?

By the way, I mailed out your cards this morning.

night owl said…
I'm usually not one to say the BBWAA is filled with idiots, but:

In a comparison between Braun and Kemp, Kemp wins 8 of 13 major offensive categories, and he's a better fielder and base runner.

My answer to the argument that the BBWAA stresses that the MVP comes from a pennant-contending team is "not always." Andre Dawson is example one. There are plenty of others.

I also don't buy that Braun had more pressure on Kemp because he played for a team in the midst of a pennant. He was surrounded by quality players! What more incentive do you have than that? Where is Kemp's incentive? Aaron Miles?

The fact that six people voted Kemp sixth is a joke. I'm glad voters take their job so seriously.

steelehere said…
I'm disappointed as well that Kemp didn't win. This is the third time in fifteen years that a Dodger should have won the award but the media got it wrong.

That said, I hope that the six people that actually voted Kemp third step forward and explain why they had Justin Upton or Prince Fielder ahead of him on their ballot as that's just ridiculous.
November 22, 2011 at 3:02 PM