November 17, 2011
(Today is "Take a Hike Day." Really. I'm going to have to remember this day the instant I become independently wealthy. But right now I'm only wealthy in cardboard terms. Time to appreciate some cardboard. This is the 125th in a series): 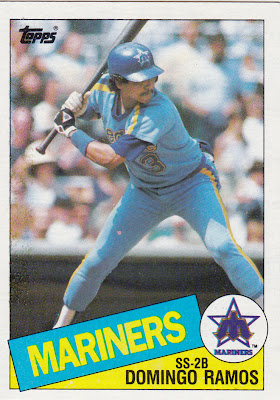 You have chosen wisely, voters. In a matter of weeks, there will be a brand new 1985 Topps set blog for everyone's absorption.

I don't know at this point how I will treat the set or what you can hope to learn from the blog. I expect that my posts will be rather brief. One of the things that I didn't like about the '75 Topps blog is that I started out with brief posts and then turned them into longish biographies. I won't be doing that with the '85 set.

My main objective with the new blog is to re-introduce myself to the set. As I mentioned before, I bought this set at the start of the '85 season and barely looked at the cards from that point forward. It's about time that I look at them card-by-card, as is a set's God-given right. So, for those of you who haven't seen much of '85 Topps you'll be learning right along with me.

I was in a year of transition in '85. I ditched a girlfriend and a job, moved to a new city, attended a new college, got a new job and made new friends. It was the year of Miami Vice, the Super Bowl Shuffle, and getting your money for nothing and your chicks for free. I was welcoming anything and everything the world had to offer in '85.

So I'll see how I can work that all into a blog about cards.

I've got several weeks to plan as it's not going to start until some point in January. In the meantime, I offer one of the cards in the set -- one of many "nobodies" in the set -- Domingo Ramos.

Perhaps you noticed that he's choking up on the bat. Does anyone do that anymore? When I was young, I remember announcers talking constantly about players choking up. They discussed it with admiration in their voice. "Choking up" was something to respected, a weapon for a player lacking in power or bat speed to use to even the playing field against his opponent.

While playing ball as a kid, the adults would always holler to the smaller kids, "choke up on that bat!"  "You're not going to get around on that, Billy! Choke up!"

Then, one day, everyone inched their hands back down  the bat nob. During the McGwire-Sosa home run chase, I never heard about anyone choking up. Who would need to do that? Did you see how @#%$& far he HIT that??????

But we're a little ways from the steroid era now. Run and power production has almost returned to 1985 levels. Yet, I haven't seen anyone choking up.

Perhaps it's not necessary what with all the weight training over the years. Or maybe it's just not cool enough. When I was young, the strikeout was uncool. It was embarrassing to strike out. Dave Kingman would strike out four times a game and he was considered a joke. Who cares if he hit a towering home run? He'd strike out the other three times!

Still, Kingman's strikeout totals back then were around 130, 150 a year. Now, the league leader has over 200 strikeouts and no one cares.

I wonder if anyone ever advises Drew Stubbs or Mark Reynolds to choke up on the bat? They'd probably get bludgeoned.

Anyway, I'm sure we'll find plenty of differences between the players of '85 and today's players on the 1985 Topps blog. I hope all 133 of you who voted in the poll will join me for that. It should be a lot of fun.

steelehere said…
I think there needs to be a "2000 Presidental Election Florida Loose Chad" recount/inspection of the voting? Last night, 1971 Topps was leading 50 to 34 over 1985 Topps.

Chris Stufflestreet said…
Greg, I say you keep those '71 Topps scans handy for when you finish with the '85 blog. It's a sickness, one that you won't be able to get a grip on.

MJ said…
Yeah, I call shenanigans on the last day voting! '71 had this sown up until that very unlikely collapse! Wasn't the Red Sox of September enough disappointment for one year for me?
November 17, 2011 at 7:34 AM

Anonymous said…
This should be cool. The '85 set was the last full set I collected. I think I only got about half the '86 set and then by '87 I didn't care about getting cards again 'til I got nostalgic in '08.

But I have to agree with some of the other commenters... '71 did a major (and suspicious?) collapse in the polls overnight. I'm going with the theory that David Freese was somehow playing against the '71 set ;-)
November 17, 2011 at 8:07 AM

Matthew Glidden said…
Looking forward to 1985 Topps, a set right in my childhood collecting wheelhouse. As a Seattle fan, I got several cards signed by Domingo Ramos, probably even one like that pictured above.

Domingo seemed genuinely amused or perplexed to be on a card without a picture.
November 17, 2011 at 8:48 AM

Anthony Hughes said…
lol, I came here to read about when you'll be starting your '71 Topps blog, only to see that someone stuffed the ballot! lol Something is kind of fishy here
November 17, 2011 at 8:57 AM

night owl said…
I do remember Bonds choking up for a period, but not always. Eckstein used to choke up, too. It was so apparent because no one else seemed to be doing it.

As for the poll, I have no info on that. You can only vote once, supposedly. If someone rigged it from the outside, they've got a lot of time on their hands.
November 17, 2011 at 10:49 AM

EggRocket said…
Yeah, I'm definitely in the "recount club". 1971 was going to be awesome. I suppose I'll hold my nose and read about 1985. haha