November 03, 2011
(Greetings everyone. Today is Sandwich Day! I love sandwiches. So go out and have one! But not one of those Double-Down things. Those are just plain disturbing. ... It's time for Cardboard Appreciation. This is the 123rd in a series): 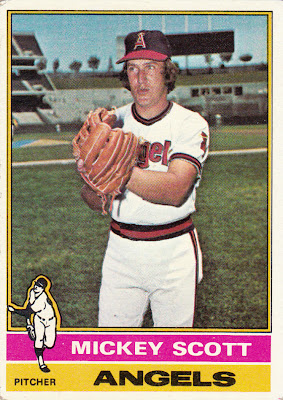 I didn't grow up in an area that produced many major league ballplayers. The Northeast is a cold, cold place for playing ball year-round, and it seems nonstop baseball is what it takes to grow major leaguers.

Although New York has created more MLBers than any state other than California and Pennsylvania, I'd like to see how many of those New Yorkers came from upstate New York, where the population isn't nearly as fierce (but the weather is) as it is in the greater NYC area.

Somehow I knew this as a kid. I was a voracious card-back reader even as a 10-year-old, and I would note the birthplaces and hometowns of all of my cardboard friends:

Nope, not a Binghamton, New York, in a single one of them.

But that didn't deter me. Sometimes I'd even organize my cards by the birth states of the players.

In 1976, my second year of collecting baseball cards, I would bring the cards down in the basement with me. That was where all of our toys were, and we did consider cards toys. We would even sometimes put the cards in the big toy box with the Leggos, Matchbox cars and plastic dinosaurs. It was nothing to toss a single card in the toy box and then plop a bunch of tinker toys on top of it.

One day, while in the basement, I was turning cards over and examining backs, as I often did. The Mickey Scott card seemed goofy to me. Scott looks like he's caught in mid-sentence by the photographer. And that longish hair gave off a girlish vibe, to my young way of thinking.

But then I turned the card over: 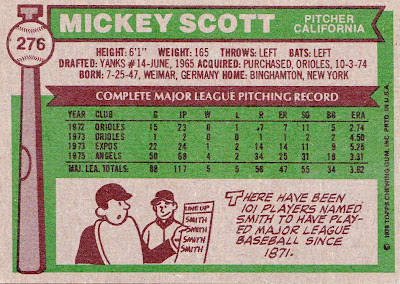 I read his birthplace. Weimar, Germany sure was an interesting place to be born. Then my eyes moved right, to Scott's hometown:

I'm sure at that point I suppressed the urge to run upstairs and tell my dad that we had to drive around all the streets in Binghamton until we found Mickey Scott's house. That would have gone poorly.

But the very fact that "Binghamton" was mentioned on the back of a baseball card made me feel proud. I'm sure I pointed out Scott's hometown to my brothers and my friends, and I'm sure some or all of them went and asked their parents if they could drive around town until they found Mickey Scott's house.

Scott pitched in the major leagues for five seasons, mostly with the Angels, but also with the Expos and Orioles. He had only one other Topps card after the coveted 1976 card. That was in the 1977 set (it's a card I still need).

Scott continued to live in Binghamton after his career. He opened a bar, called "Mickey's Mound," which I remember driving by when I was a teenager, having no idea that it was Mickey SCOTT's Mound. I wonder how the conversation would have went if I asked my folks if we could just pop into a bar to see if a former major leaguer was there. (Mickey's Mound is now The Brass Lantern Tavern).

Scott pitched for a Yankees farm team, the Binghamton Triplets, during the 1960s, and kept his connections to the Yankees after his career, working in various capacities. Yankees manager Billy Martin often frequented Scott's bar.

But on Sunday, Scott went out to rake leaves, and he never returned. His lifeless body was found slumped over outside of his home in Binghamton. Relatives believe he suffered a heart attack or stroke. Mickey Scott was 64.

In this article, Scott's sister calls her brother a "super, super guy" and "fun-loving." "Mickey was a hell-raiser, but everyone had good things to say about him," she said.

Hell-raiser indeed. His card sure raised hell with me in that basement in 1976.

Sorry I never found your house, Mr. Scott. I'm sure if I ever did, I'd probably just blither something incoherently to you anyway.

Anonymous said…
Love your take on this. I just read about his death a few hours ago. Apparently Booby Grich thought Mickey had a great changeup.
November 3, 2011 at 8:03 AM

weef said…
I also grew up in the Binghamton area in the '70's (Endwell to be exact) and blame the weather for my failed major league career. It's difficult to play ball when it's snowing...

Also from our area at that time: Rob Gardner (pitcher for the Yankees), Ron Luciano (ump), and Johnny Logan (has a little league field named after him in Endicott).

Doc said…
This is totally unrelated to the post... There is a guy on one of the Facebook Diamond Giveaway sites trying to unload a 1952 Frank Smith.

night owl said…
In case people come across this and think I don't know about the Upstate New Yorkers who went on to be major leaguers, I do know and have mentioned many of them before.

There have been a few from the Triple Cities area, too, as weef pointed out above.

My point was that Upstate N.Y., when compared with the greater NYC area and other states, comes up short, because of weather and sparser population.

In a reposting of this post on another site, a commenter totally whiffed on the point.
November 4, 2011 at 1:45 AM

Contrary Guy said…
Commenters on that other site are known to be "snarky" and that is putting it mildy.

So far, I see they have treated you relatively "well".