When the hobby was between the pages 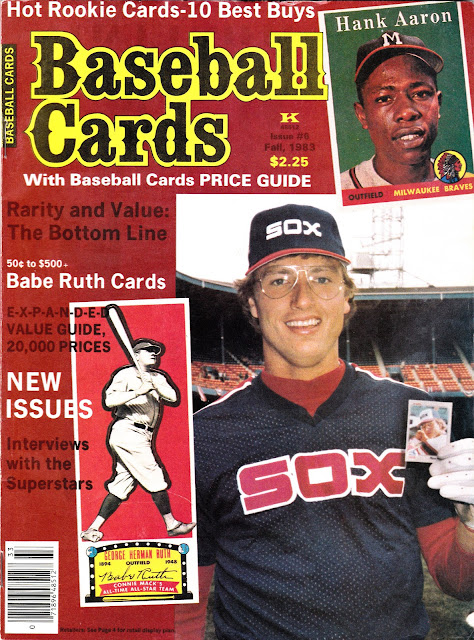 When deciding to do a series of these Baseball Card magazine posts, I thought that I would start to get repetitious and proceed to become bored by them. But I'm still finding stuff that I think is interesting. Whether you think it's interesting ... well, never mind what you think.

I decided to show the Ron Kittle issue next just because it's an issue that seems to reflect the rookie card fervor that hovered over the hobby at the time (and still does in some quarters, sadly). The last issue that I showed, from the spring of 1982, was also heavy on rookie card topics, but this one is even more so.

I'll start with the cover and remembering how proud I was that I owned the 1983 Fleer Ron Kittle card, which Kittle himself is displaying. I didn't land many of the hot rookies of the time, but I did have the Kittle. I didn't think it would make me rich -- I didn't think in those terms yet -- but I did think it'd be worth bragging about among my friends. Of course, they were obsessed with Yankees, so Kittle didn't mean nothing to them. 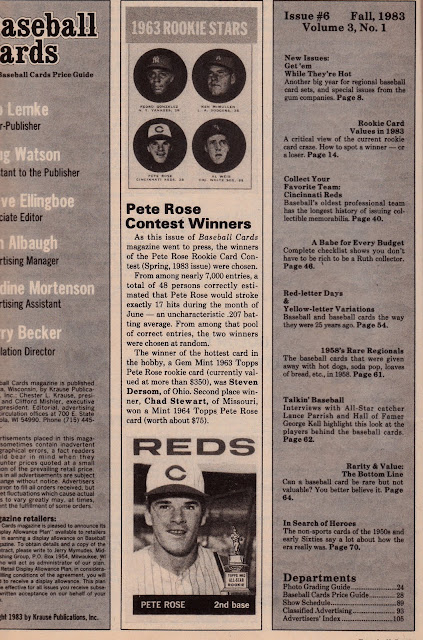 Here is the table of contents. There are still no letters to the editor yet, as of fall 1983. I think they didn't come along until 1984.

There is more rookie card fever on this page. The winner of the Pete Rose rookie card was announced. As an unsuccessful participant in the bid to win the card, I often wonder if Steven Dersom of Ohio still owns this "Gem Mint" card, and whether Chad Stewart of Missouri tossed the '64 Rose in the trash because 1) it wasn't Rose's rookie card, and 2) it was only "Mint" and not "Gem Mint." 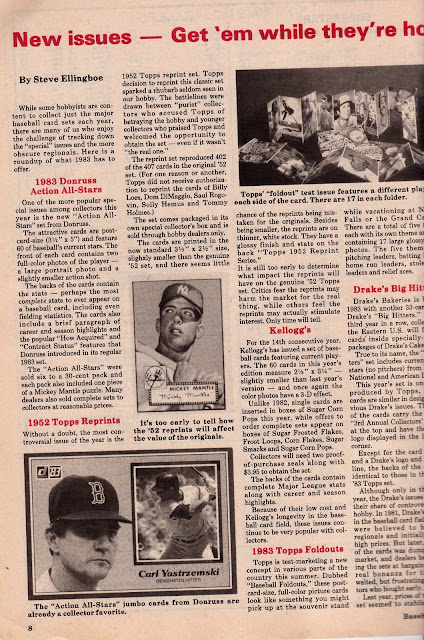 One of my favorite parts of each magazine was the "new issues" section. Most of these sets I would never see in a store, but I was fascinated regardless.

I did come across some of those '83 Donruss Action All-Stars, which are the size of a small postcard. I don't know what I did with those.

I also enjoy the write-up on the "controversial" reprints and whether they would end up destroying the hobby. Topps issues reprints as an insert set in just about every base set these days. I have dozens of 1950s Jackie Robinson reprint cards alone. I don't think it's harming the market for the actual Robinson cards, seeing as I still can't afford any of them.

The cover story in this issue was rookie cards -- specifically what rookie cards were hot in 1983 and what were the best buys. The most interesting aspect of this article, particularly 28 years later, is what the writer thought were the most overrated and the best values among rookie cards. 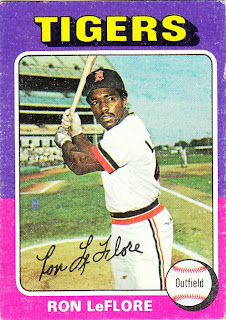 As you can see by the overrated list, Ron LeFlore's 1975 rookie is mentioned first. I had loved this card since the time I pulled it from the first packs I ever bought back in '75. LeFlore remained a favorite throughout his career.

But the rating as an overrated rookie was no surprise. LeFlore's career ended in 1982. In fact, looking at the entire list, none of these players have hugely popular rookie cards. Ron Guidry, Dave Parker and Rich Gossage are probably the biggest ones and two of those are only because they were Yankees. 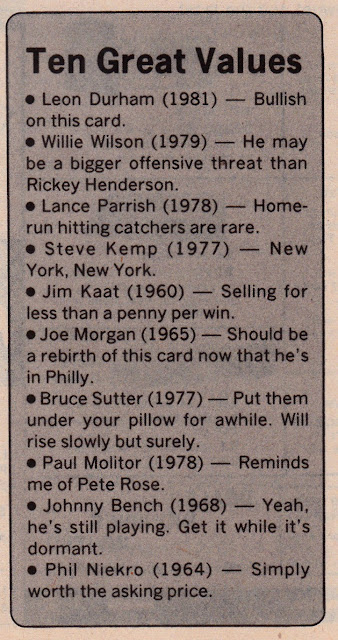 A lot of misses on this list, though. Steve Kemp fizzled out completely. Willie Wilson never became the player that everyone thought he would be in 1980. And it's hard for me to believe that the Johnny Bench rookie was ever undervalued. 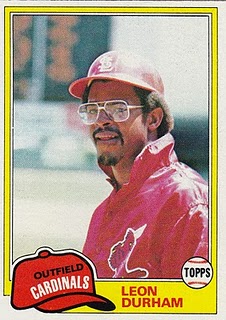 But I'm blaming this list for the fact that the Leon Durham card was one of the last cards that I needed to complete the 1981 set. Hoarding Leon Durham rookies? Really? 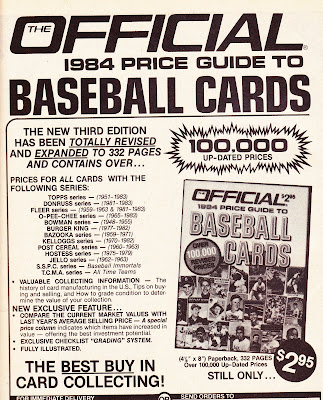 Anybody could put out a price guard in 1983. In fact, I don't know why I didn't pull out a few sheets of loose leaf paper, set some arbitrary prices for cards and slap the word "official" on the cover. I could have made a bundle in 1983. 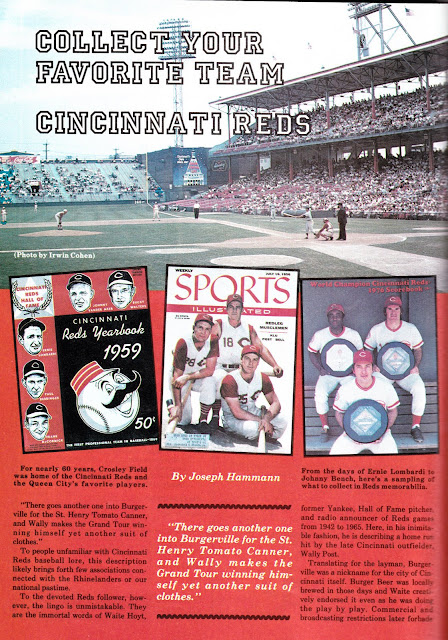 One of my favorite regular features in BCM was the segments on collecting a favorite team. This issue featured the Reds.

I was never interested in collecting pennants and pins and cups, but the baseball cards and periodicals fascinated me. Each team's heritage -- especially those teams that had been around for decades -- was worth a look. 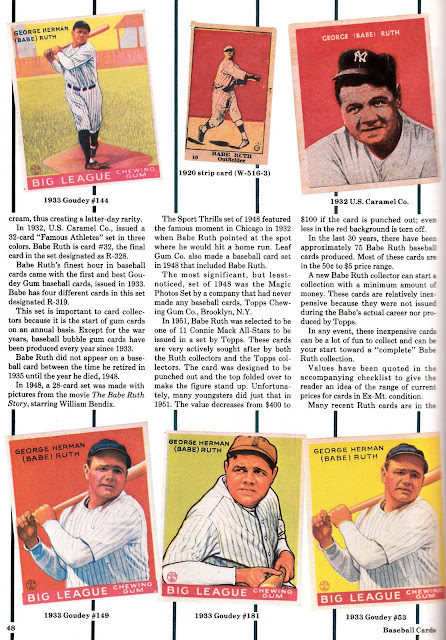 The theme of the article was "A Babe for Every Budget." The Goudey cards, of course, only the high-rollers could and can afford. 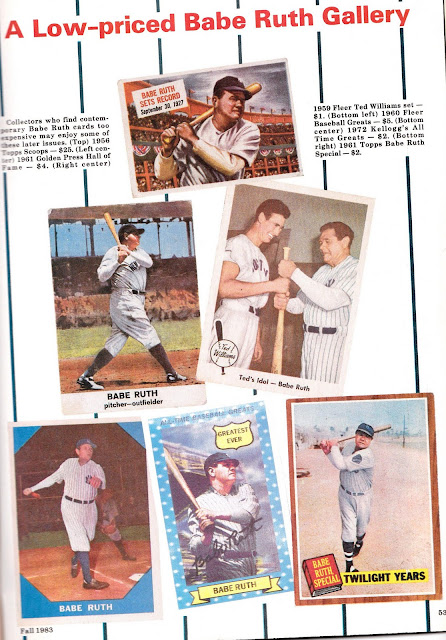 Here is what the article considered the affordable Babe Ruth cards. Some of these aren't exactly cheap anymore.

Fortunately, thanks to the 1990s, and Topps' recent fascination with retro stars, there are gobs and gobs of affordable Ruths. It is more a novelty to own an Andy Pafko card than a Babe Ruth card. 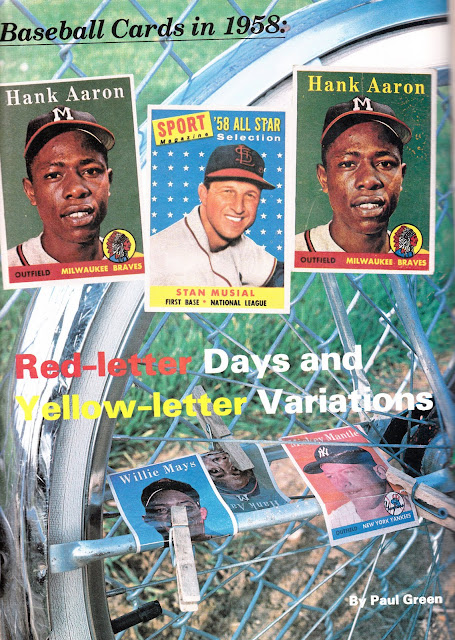 Another fascinating article covered sets from 1958, particularly Topps' 58 set. There is a great two page spread of '58 cards with this article that I couldn't show because it doesn't fit on my scanner.

But this picture suffices, especially since I have wondered forever whether the BCM photo editors actually clipped Willie Mays, Mickey Mantle and Hank Aaron '58s to bicycle spokes. I'm sure it horrified me then, and it unsettles me slightly at this very moment. 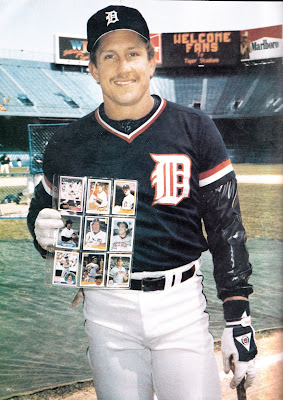 Lance Parrish was interviewed in the regular Q&A section featured in BCM. There you see Lance showing off some of his early '80s cards. Parrish was a big-time young star of the time who is largely forgotten today. I wonder which of these cards is his favorite?

The article that immediately followed the Parrish Q&A is on rarity and value. Scarcity and all that stuff. I have a mild interest in it, but it delves into economics and all those elements that people who buy and sell on ebay are endlessly fascinated by, but make me zone out. Sometimes I go on Twitter and the topic comes up and I swear I slip into unconsciousness for entire segments of my timeline. I apologize for that and for no scans on this article. 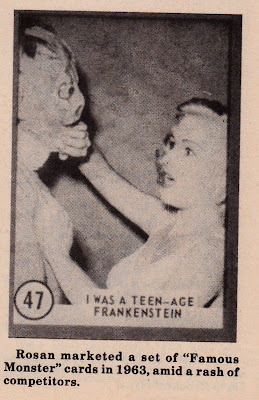 But I have a scan of THIS. I love comically fake monsters. This is an image from an article on non-sports cards from the mid-1950s to mid-1960s. This card left an impression. 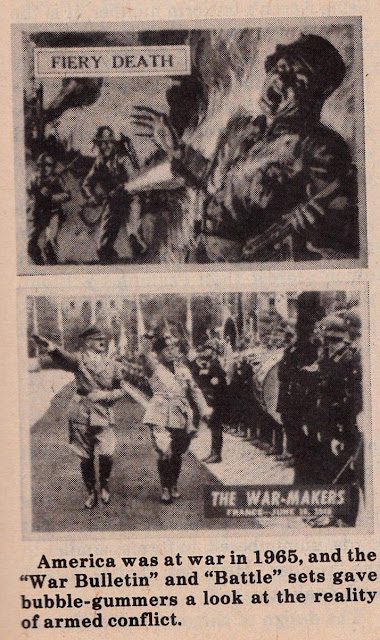 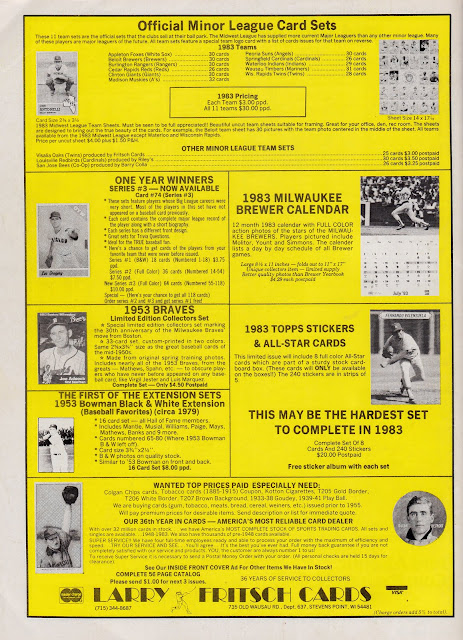 Finally, as I like to do, here is a comparison in prices from 1983 to the current time.

Larry Fritsch Cards has been around for as long as I've been collecting. And so has the One-Year Winners set that I have never bought but has always drawn my interest.

It is a set of players who made a quick trip to the majors, lasting no more than a year, most of whom never had a baseball card.

A set with Eddie Gaedel, Bobo Holloman and John Paciorek is pretty awesome, but I think I'll pass.

That ad is on the back cover, so that's the end of the issue.

I've read through this issue -- and the other issues I have -- over and over again and still find interesting facts with each read. I'm very glad I saved them.

There are still 5 or so issues to go.

gcrl said…
cesar cedeno was so overrated, the magazine couldn't even spell his last name correctly.
May 26, 2011 at 2:06 PM

Anthony Hughes said…
Notice Lance Parrish doesn't have his own rookie card in there - it's because he knew Dale Murphy would make that card worth at least a couple dollars some day!
May 26, 2011 at 3:54 PM

Anthony Hughes said…
In that picture of the Mays, Aaron and Mantle cards in the spokes - I think the Mays card looks too shiny to be a real card, and the cards bend on the frame in a way that a card would not - how much you want to bet they took photos of the real cards for that photo!
Unlike my father who frequently points out that he actually did put Willie Mays and Mantle in his spokes as a kid... the nerve.
May 26, 2011 at 3:58 PM

Spiegel83 said…
Keep these posts coming. I enjoyed the flashback in time. It also makes me wish that there was a baseball card magazine today with actual articles.
May 26, 2011 at 6:43 PM

BASEBALL DAD said…
I love those old magazines too.I have a few with the cards still intact. I agree with you on the reprints.Those of us who buy and collect them can't afford the originals,and they do fill a space!
May 26, 2011 at 8:52 PM

Fuji said…
Kudos to an amazing post... I'm glad I invested the 20 minutes to read it. The best part of looking at older price guides is remembering the past and reflecting on it.

This issue totally made me think back to the Ron Kittle and Leon Durham days.

Two Packs A Day said…
I wonder how many One Year Wonder sets Fritsch Cards move. Adjusted for inflation, the set's selling price should be about $40 today. I doubt it's inflated selling price is because of who is in the set. It's probably because the inventory is wasting space in their warehouse for several decades now. ;)
May 30, 2011 at 3:50 AM